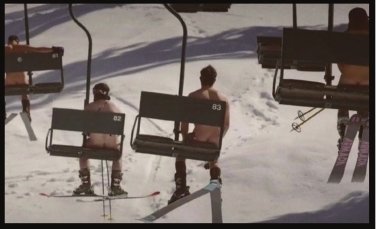 (64 min., directed by Nick Waggoner) A man lays spread-eagled on a sunbaked mesa. Modern life, a narrator tells us, has gotten too complicated and soulless. Remember your first childhood taste of snow? If you suspect you´re watching a long-form commercial, you are. As our seeker climbs into a VW Beetle and drives north, two full minutes of logos from outdoor equipment companies roll across the screen. (Got your Clif bars?) When the car conks out, the seeker walks into the snowy hills and encounters a commune of cheerful, scrubbed hippies with knowing eyes and blinding white teeth. They romp and ski and snowboard in slow-motion grammar of energy drink ads for over an hour. Depending on your appetite for gazing at mountains of snow in April and your tolerance for banal ad copy uplift about recapturing freedom and wonder, you may be mesmerized by the amazing photography, glittery snowscapes and impressive ski stunts. (The naked skiing sequence lived up to all my expectations.) Other folks who have been in Michigan all winter might prefer the sunbaked mesa. -LC

“We Are the Land”

(14 min., directed by Andrew Heskett, Lauren Lindberg and Ryan Westra) This poetically inclined film omits science, economics or information of any kind to stoke righteous outrage over the hydraulic fracturing, or fracking, of natural gas on a million acres of land in Montana owned by the Blackfeet tribe. The filmmakers´ entire strategy is to juxtapose the weary, noble face of Pauline Matt, an activist whose opposition to fracking has set her against many people in her own tribe, with images of ugly equipment, ditches and flames. -LC

(65 min., directed by Daniel T. Skaggs) This documentary follows a group of modern-day hobos, young adults living on trains and off the grid. The producers have made a compelling work, filmed and edited to produce a piece that is at once an objective but respectful and compassionate look at the lives of these naïve counter-culture kids. Audiences may fluctuate between admiring them for their sense of freedom, pitying them for their tragic back stories and being repelled by their lack of hygiene and drive to succeed.

Yet over time some of the principal players evolve, as the exhaustion from the rough life on the rails slowly convinces them that perhaps having a job and a stable home is a better outcome than being found dead under a viaduct. The lush and masterful cinematography highlights the beauty found in urban blight and human decay. -MC

(25 min., directed by Ben Lazarus) Not for the faint of heart (or stomach). This fascinating narrative short gives insight into the rare condition known as body integrity identity disorder (BIID). Sufferers are plagued by the impulse to amputate a part of their body to which they have never felt connected.

While the film attempts to build empathy for victims of BIID, audiences may have trouble getting past some graphic content in the film. Those who can will be treated to some excellent performances, especially by New York Dolls front man David Johansen and character actor Mark Margolis (“Breaking Bad”). -MC

(24 min., directed by Mari Okada) Imagine trying to recover from a fever by watching “The Walking Dead” and “The Wizard of Oz” on side-by-side televisions while doing alternating shots of NyQuil, Red Bull and sake bombs. This comedic Japanese short is kind of like that.

Fans of J-pop culture will be familiar with the wacky stylings; others may be confused and irritated by its lack of sense. The film is a fairy tale of sorts, in which the sun makes a scarecrow girl human for one night: Halloween. She goes to Tokyo, and at a speed-dating party she falls for a real zombie. In their precious few hours before sunrise she helps him kill bad guys and romantically spoon-feeds him their brains.

It is weird, but much cuter than it sounds.

(92 min., directed by Curtis Matzke) This feature-length film adds to the canon of work about young men who aren’t ready to grow up. Jeremy (Jon Wierenga) is pushed out of the nest by his well-meaning parents (Bruce Bennett and Anne K. Miranda), who rent him an apartment, pack his things and drive him there. Once settled, he meets a quirky neighbor who wants to partner with him in a Rube Goldberg invention competition. He also discovers that his high school crush (Mary Wardell) lives in the complex.

Written and directed by Matzke, an MSU grad, the dialogue was primarily improvised. While the meandering pace may have been an intentional choice to emphasize the feeling that time crawls when you have no direction in life, a tighter pace would make the film more enjoyable. Still, the quality of the production belies its $2,000 budget. -MC

“Into the Silent Sea”

(25 min., directed by Andrej Landin) A small budget goes a long way in this intimate, low-key riff on "Gravity," about the shrieking terrors of outer space. A doomed cosmonaut drifting irretrievably out of orbit connects with an Italian radio engineer back on Earth. Their trivial chat is a heartbreaking lifeline in the horrific emptiness of space. There are flashbacks to the cosmonaut´s past, showing what he has left behind, but most of this short film consists of two fine actors in two dark rooms. -LC

“Mobile in Black and White”

(92 min., directed by Robert Gray) “Mobile in Black and White” should have the subtitle “A Primer on Structural Racism in the United States.” It centers mostly on the titular Mobile, Ala., and that city’s history of inequality between minority and majority groups.

No stone is left unturned as a parade of experts talks about how inequality has seeped into all the aspects of society. Experts in education, religion, the justice system and society in general carefully lay out the lesions eating at the lining of Alabama and the U.S.

But it is a parade. Face after face talking in rooms with nice bookcases. There is very little movement or narrative. Occasionally, there are shots of the Mobile skyline and neighborhoods. Sometimes there are political cartoons, factoids or strangely rotating book covers, but nothing driving the narrative forward.

It has the clean feeling of an academic lecture. The interests of the victimized are represented, but their voices are never actually heard.

It is not a compelling piece of filmmaking, but its message is too important to be ignored. It is the opposite of D.W. Griffith’s “Birth of a Nation.” Morally irreproachable, but not cinematically captivating. Still, we could all learn something from it. -DB

(119 min., directed by William Kleinert) This is the Great Lakes film version of Bill Bryson’s “A Short History of Nearly Everything.” “Project: Ice” is good movie for people who like the Great Lakes and/or ice.

There is knowledge here: Viewers will leave educated on everything from the Coast Guard’s mission in the lakes to how exactly the lakes were formed. But it might feel a little like work at the hour mark. It is well shot, and each piece is interesting, but at two hours long it feels glacial.

What is most striking about the film is how the final part hits the mark perfectly. Over the course of the film, we are led through each region by its people and learn their experiences. We see their history and heritage as they do, walk through their communities, sit at their tables and laugh with them. And finally they ask one thing as the price of admission: Recognize that all this is being harmed by climate change.

It is a call to do something —anything — no matter the politics or science. And it works. -DB

(5 min., Ora DeKornfeld) In a little less than five minutes, we hear of rape and recovery. We explore the tempering of the Ouroboros of power, giving strength as it consumes self-control. Eventually, we are left with the portrait of a woman as a mother, a teacher and a survivor.

“Sensei” is a self-contained look at perseverance in the face of traumatic physical and emotional injury, the pitfalls and perils of power and how these ideas figure into the multitude of roles humans play in everyday life. It harnesses something angry and ugly and tells the audience something beautiful. A definite must-watch. -DB

(88 min., directed by Jason Roche) If you love baseball — and the Detroit Tigers in particular — “Stealing Home” will hit you like Miguel Cabrera crushing an off-speed fastball. The spirit of the game, much like in “Field of Dreams,” emanates from every frame, and while the passion of the community’s involvement is palpable, it only truly resonates with the already converted.

Steeped in history and nostalgia, “Stealing Home” unfolds like a 90-minute news story. It’s about the efforts of a group of volunteers determined to preserve and maintain Navin Field, site of the former Tiger Stadium. Although their efforts are initially impeded by the city’s red tape, the Navin Field Grounds Crew remains stalwart in their efforts to cut, trim and weed what they call “sacred ground.” It’s all done so that city residents can play on the same diamond as their idols.

The Navin Field Grounds Crew’s dedication to the preservation of precious memories is beyond reproach and a must-see document for baseball fans, but anyone indifferent to the old ball game might be left wondering what the fuss is all about. -SP

(25 min., directed by Zach Wetcher) An expertly shot, stylish bit of neo-noir, “Straight Down Low” is a compelling murder mystery that manages to infuse its short run-time with a potent dose of grit and humor. A teenage library worker-cum-gumshoe insinuates himself into the perilous underworld of Brookside, Calif., trying to solve a murder before gangland war erupts, consuming the city and the girl he loves.

Taut and suitably hard-boiled, “Down Low” toys with expectations, both social and personal, and keeps your eyes glued and mind spinning until the last second. -SP

(80 min., directed by Mikal Jakubal) A glimpse into the rather workmanlike world of Humboldt County marijuana growers, “One Good Year” humanizes one of the most famous cannabis-producing areas in the world. The growers portrayed are honest, hardworking people with zeal and heartfelt appreciation for what comes from the soil. There are no shocking revelations, but it makes those who paint these workers as criminals look foolish.

Like any other agricultural industry, marijuana cultivation requires specialized knowledge and a deep understanding of the earth. “One Good Year” is another valuable step in putting a human face to the still-stigmatized cannabis culture. While the film is a no-frills documentary, it effectively illuminates the know-how and passion of its featured, dedicated growers. -SP