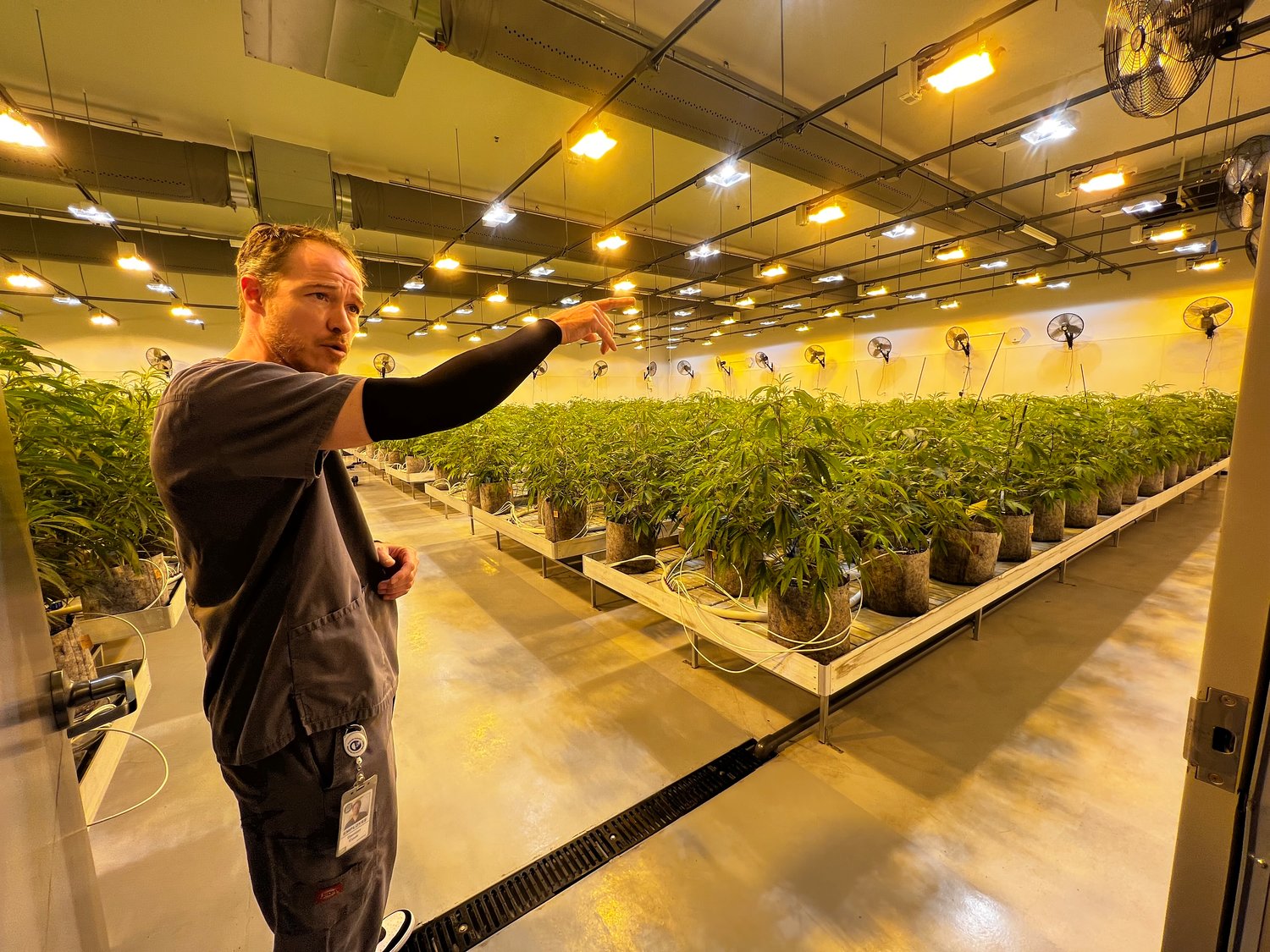 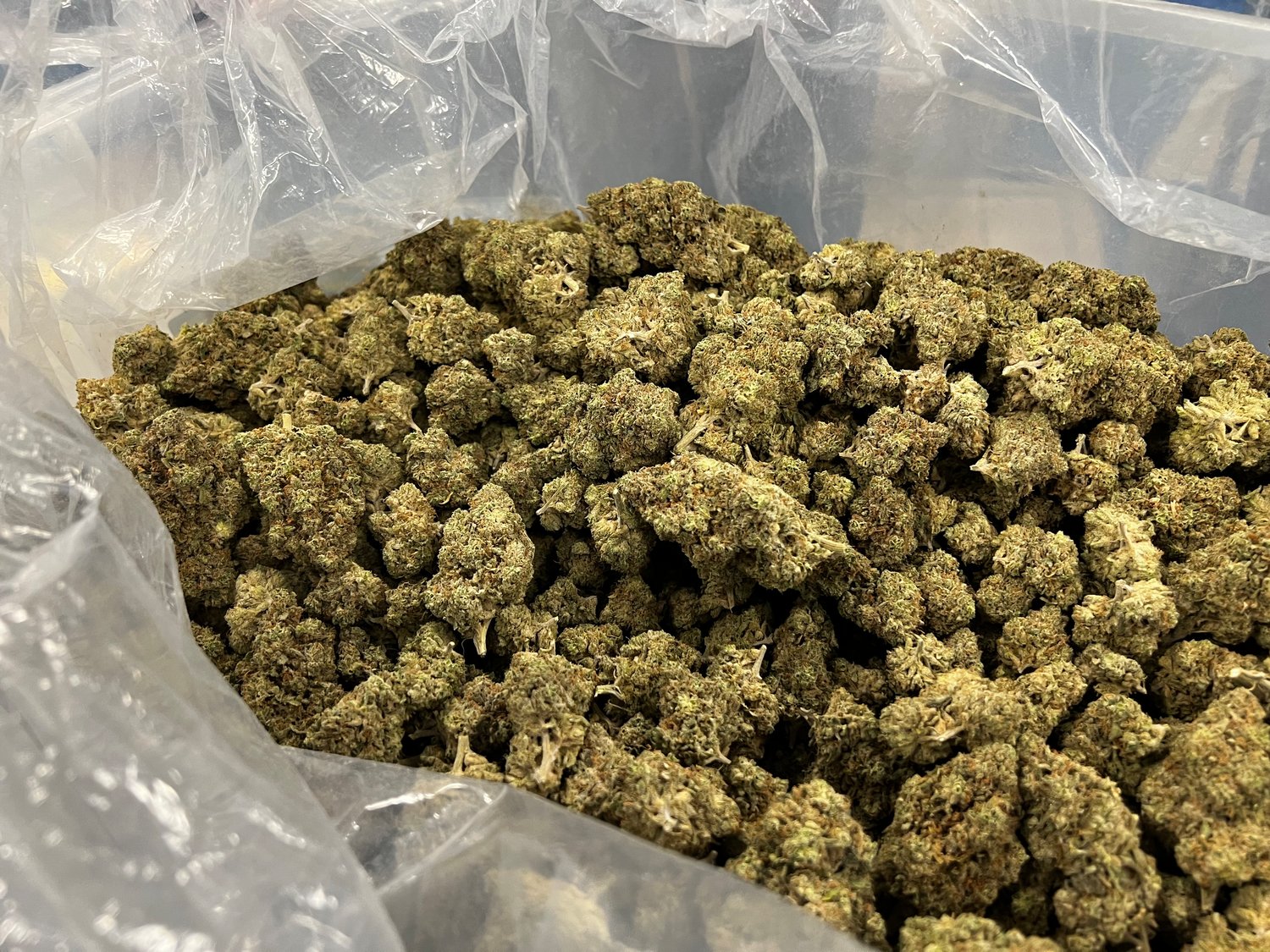 Pounds of potent marijuana are stored in boxes at C3 Industries in Webberville.
Kyle Kaminski/City Pulse 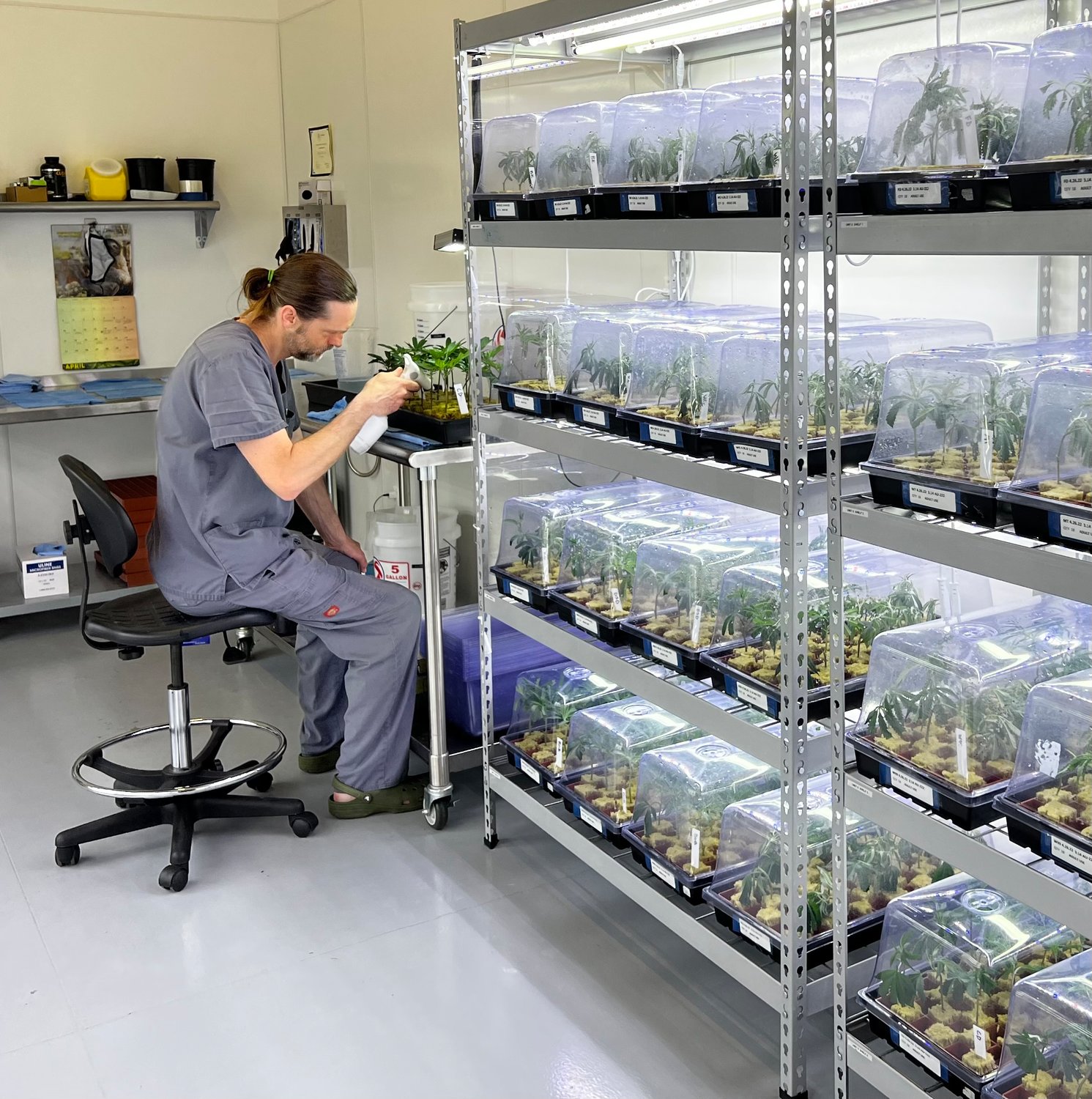 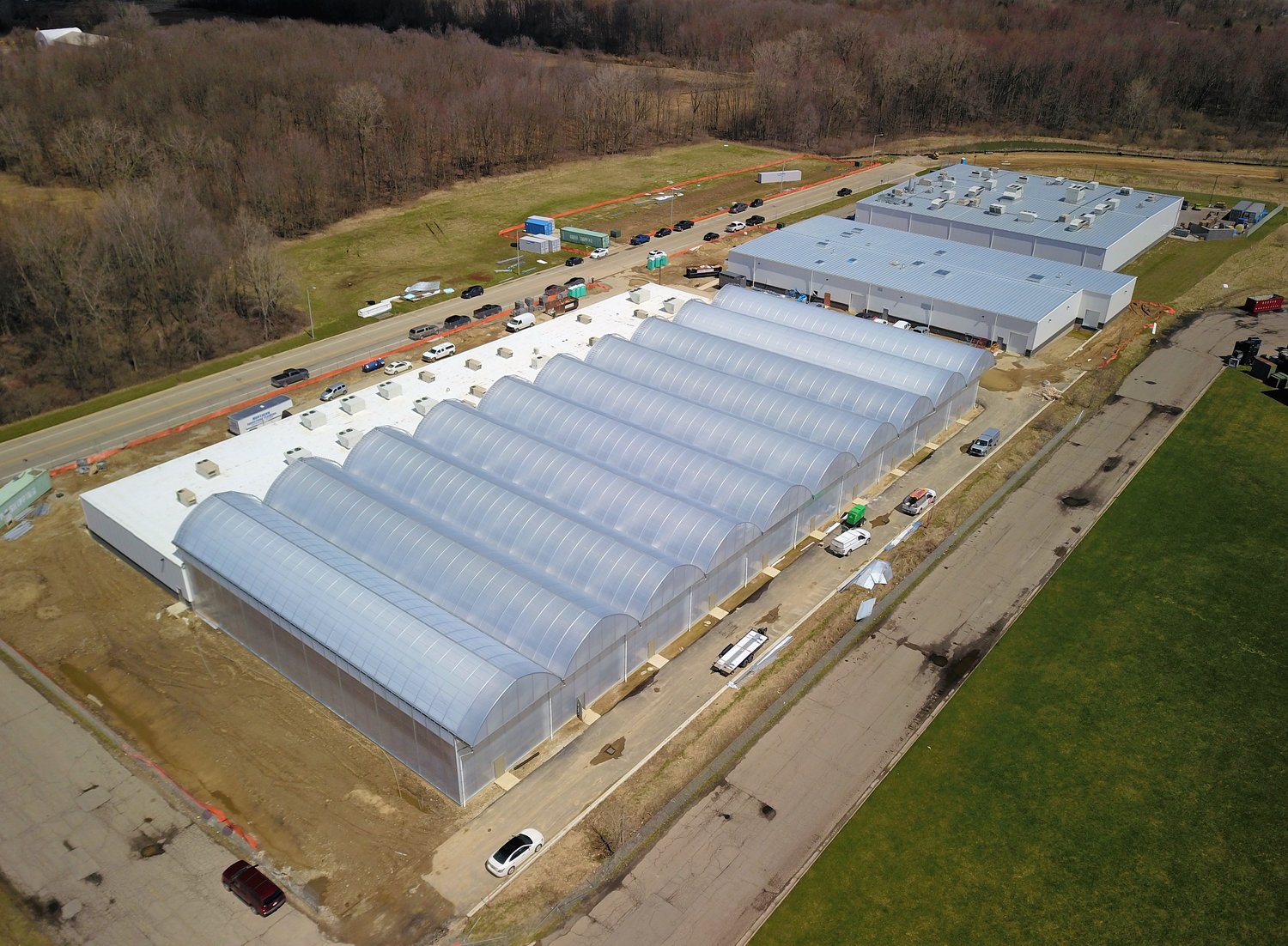 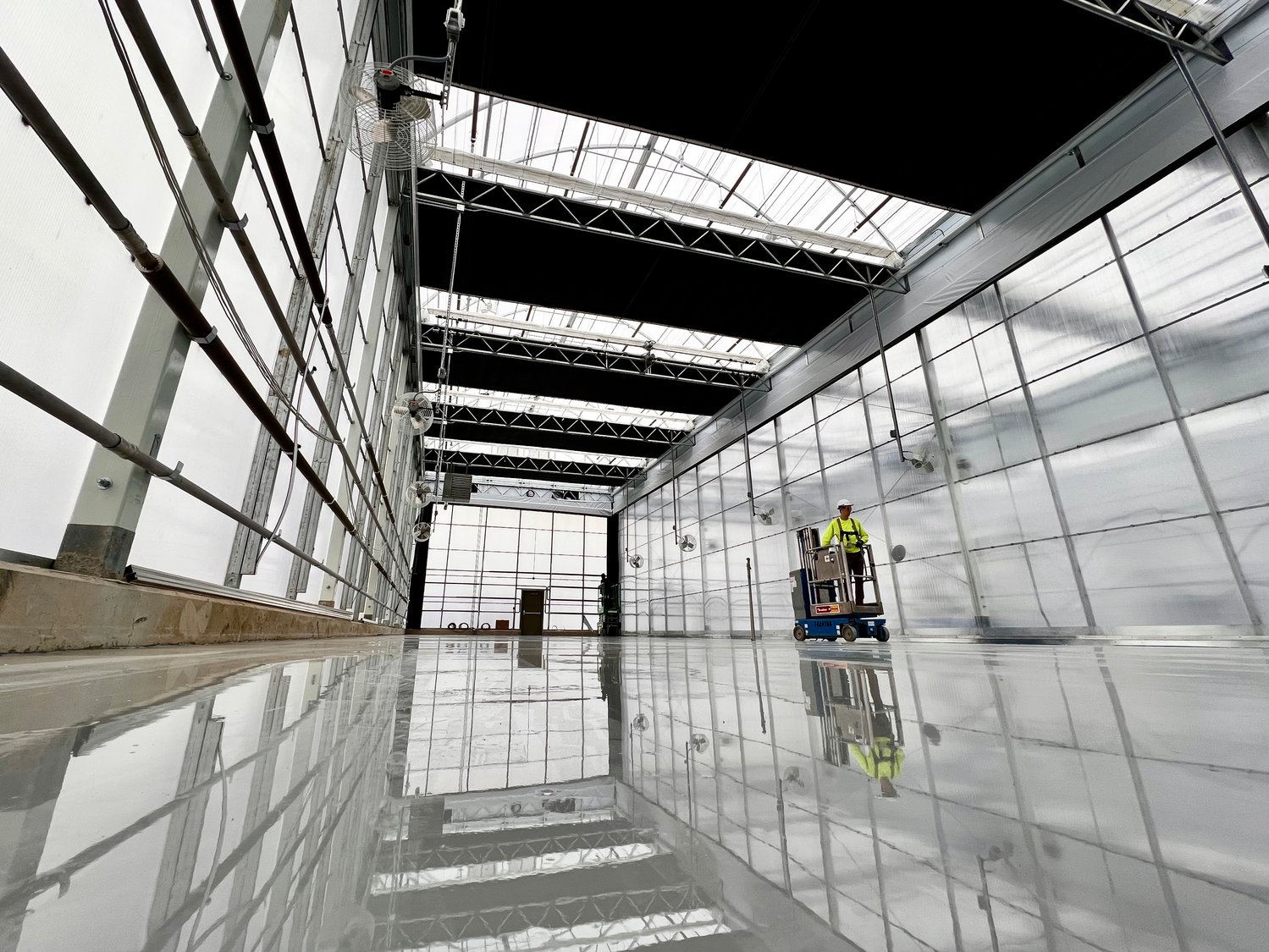 Ten newly constructed greenhouses in Webberville are expected to see their first harvest later this year.
Courtesy
Posted Thursday, May 5, 2022 12:00 am
KYLE KAMINSKI

It’s still not quite finished, but there’s something magical happening off I-96 at Exit 122. And it’s about to put the rural, one-stoplight village of Webberville on the map — in quite a big way.

Before November, officials at C3 Industries said they plan to have 12,000 cannabis plants blooming their way to harvest inside 10 massive new greenhouses, which have seemingly sprouted up overnight in the corner of the secluded business park off M-52 by McDonald’s.

By June, there’ll be a pot shop over there too — a true farm-to-table corporate marijuana ecosphere where a seemingly endless supply of weed is grown, harvested and bagged on site and then shipped right next door for retail sales. There’s also a full-blown production laboratory on site that constantly boils and bubbles bud into potent concentrates and vaporizer cartridges.

And with more than 150 people staffing the marijuana super campus, the multi-state cannabis brand from Ann Arbor expects to become the largest employer in the town before the end of the year. The closest competition is likely the nearby Aldi warehouse. Officials there didn’t return messages, but similarly sized distribution centers in other cities also employ about 150 people.

Executives at C3 Industries (which comprises the Cloud Cover Cannabis brand and High-Profile dispensaries) invited me over last week for an exclusive sneak peek tour. I spent about 90 minutes dragging my jaw across their newly constructed floors in a state of pure astonishment.

Let me be the first to send a warning to the 18 dispensaries in Lansing and East Lansing: Webberville might be a small town, but this certainly is not a small-town marijuana operation. And before the end of the year, that extra 25-minute drive east down I-96 may turn out to be well worth the extra gas money in order to retrieve some superior cannabis products at relatively affordable prices.

After I geared up in a disposable sort of hazmat suit to keep my germs off the precious weed, the first stop on my tour of Willy Wonka’s cannabis factory was at the “Mother Room,” where more than 90 different types of weed serve as the foundation of the company’s strain library. Small clippings from each plant create new life, as well as an endlessly rotating genetic lineup.

Several other rooms were filled with rows (and sometimes rows on top of rows) of plants in various stages of the growth cycle. Some just sprouted. Others were more than 7 feet tall.

Dozens of employees buzzed about every hallway of the facility last week — some peacefully spritzing small plants with water bottles, others rushing around with bell carts loaded with pot. At the concentrate production facility next door, several science-y types in white coats combed over spreadsheets and fiddled with small beakers and test tubes filled with other dank concoctions.

All told, the 40,000-square-foot facility can accommodate about 4,000 plants. But when construction is fully finished on those mammoth greenhouses this fall, it’ll add about another 90,000 more square feet of growing space, allowing the company to ramp up production production by as much as 500%.

Operating at full capacity with at least 12,000 plants, the expansion will easily rank C3 Industries among the largest and fastest growing pot brands in Michigan. Officials there were hesitant to name their main competitors on the local market. For now, it seems to be just about everyone.

Brothers Ankur and Vishal Rungta (and their longtime friend Joel Ruggiero) launched Cloud Cover Cannabis in 2018 with a smaller grow operation in Oregon.

They moved their corporate headquarters to Ann Arbor after recreational marijuana was legalized in Michigan and finished the first stage of construction in Webberville in early 2020. High Profile operates eight dispensaries across Michigan, with plans to open six more this year. One will be in Webberville. Expansion plans are also underway in Massachusetts and Missouri — and more states to come.

Vishal Rungta emphasized three main goals during last week’s tour: C3 Industries wants to control every aspect of production, squeeze every last drop of THC out of every last plant and develop a superior variety of some of the highest quality cannabis products in the country.

Vishal Rungta recognizes that the last part sounds ambitious, but he also labeled the cannabis industry as a nationwide “race,” and he wants to see C3 Industries run laps on the competition.

“I think it’s certainly a race. It’s competitive out here, but we’re hungry for it,” he explained. “We know we can produce a better product than anyone else. Now it’s just about bringing it to them.”