Broad Museum’s ‘Free Your Mind’ looks inside, and outside, prison walls 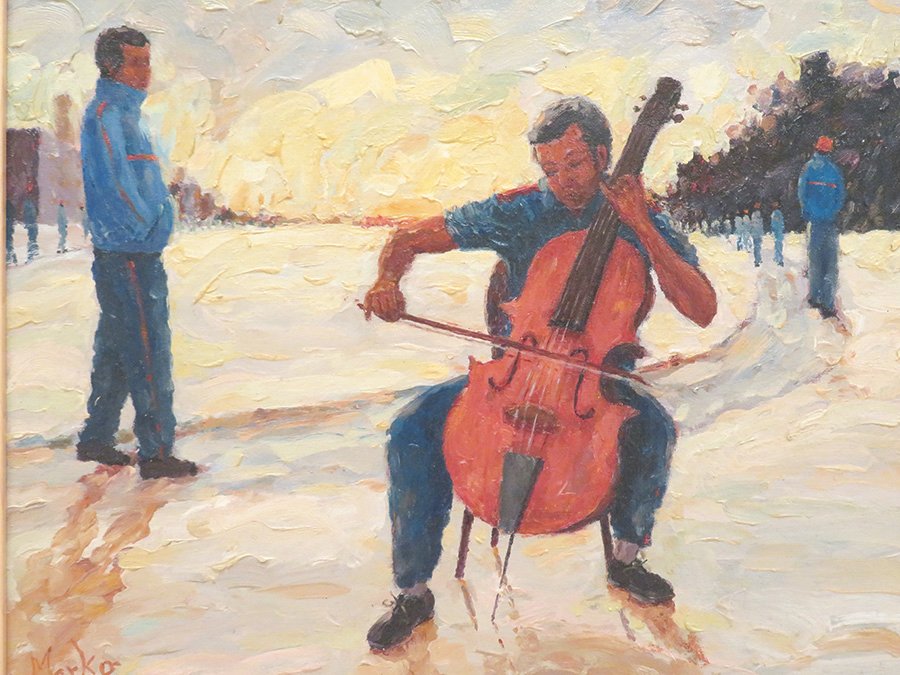 “Imaginary Cello,” by Oliger Merko, shows the incarcerated artist looking at his alternate self.
Courtesy 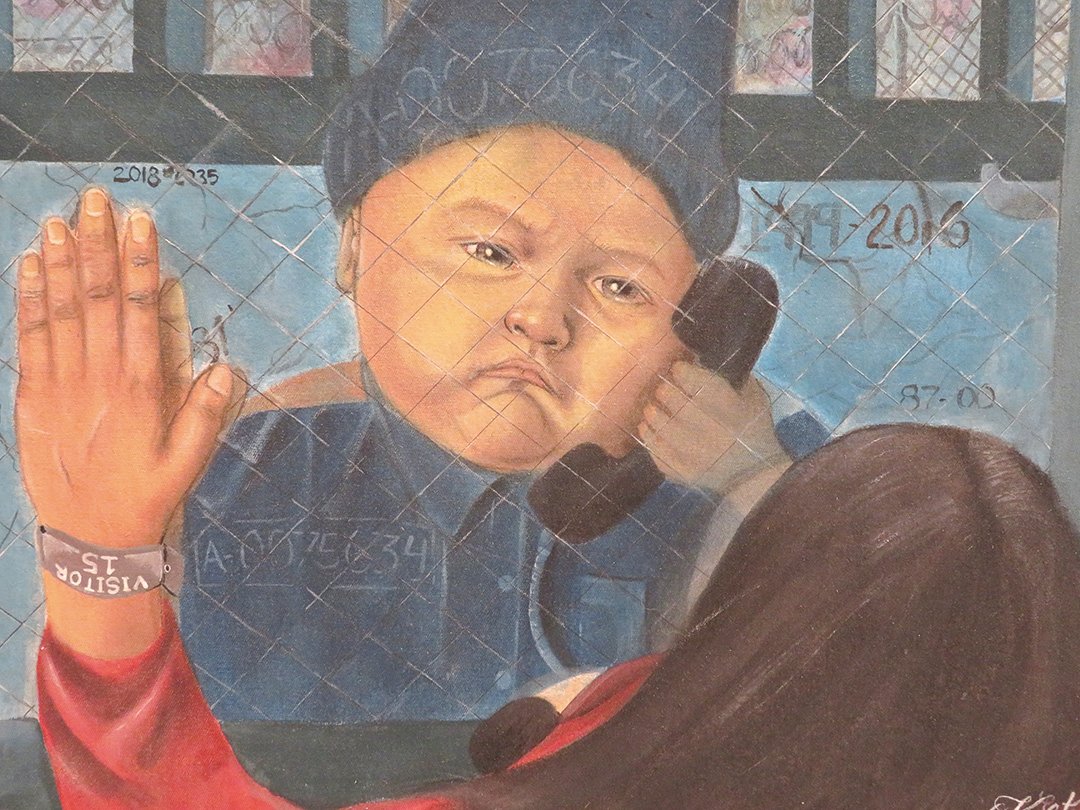 Dara Ket’s “Why My Baby?” shows a mother-son prison visit from the mother’s point of view.
Courtesy 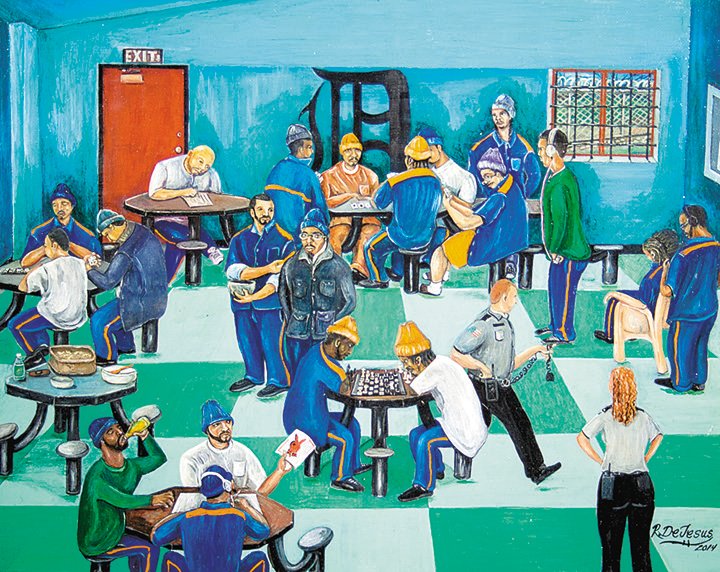 “The Way It Is,” by Rafael De Jesus, is a miniature panorama of prison life.
Courtesy
Posted Wednesday, September 8, 2021 12:00 am
‘Free Your Mind: Art and Incarceration in Michigan’

A loving mother visits her incarcerated son, pressing her hand to his across a glass barrier. The scene is familiar to most people as a movie cliché, but it gets a wrenching twist in a painting by Dara Ket, part of an exhibit of Michigan-based art by incarcerated people at Michigan State University’s Broad Museum.

The prisoner, seen from the mother’s point of view, is a giant baby, complete with prisoner ID number embroidered on his knitted cap.

Each of the nation’s 2.2 million incarcerated people is someone’s baby, spouse, partner, friend, uncle, father, or all of the above.

“Free Your Mind,” part of a museum-wide set of exhibits on mass incarceration now at MSU’s Broad Art Museum, breathes thought and feeling into numbing prison statistics by giving pride of place to deeply personal art by Michigan prisoners.

It’s a departure from most exhibits at the Broad. None of the artists were trained in schools. All were either self-taught, after going to prison, or mentored by other prisoners.

“It’s not responding to an art world trend, it’s just coming out of the person’s need to make a statement,” exhibit co-curator Janie Paul said.

Oliger Merko’s “Imaginary Cello” shows the artist marching in a prison yard lineup, awash in wintry yellow-white light. He pauses to gaze at an alternate version of himself, playing the cello he studied in his youth. The rich and beautiful impasto, or visible brushwork, harks back to the master painters Merko saw in his youth, in his native Albania, but Merko never picked up a brush until he was in prison.

Much of the exhibit is taken up with scenes of everyday prison life, combining close attention to detail with a strong point of view. John Bone’s “Cell Scene” shows the artist gazing outside the bars, surrounded by banal details like cracked plaster, a sink and toilet and ear buds strewn on a pillow.  But there’s a neat psychological twist: the picture you are looking at is already hanging on the wall of the cell, with the same picture on the wall within that picture, and so on, into infinity.

“You don’t know if it’s a way out, or an infinite tunnel where you can’t get out,” exhibit co-curator Steven Bridges said.

Museum visitors who are ready to set aside expectations of technical excellence might be surprised.

Daniel Valentine, a mechanic who built motorcycles before being incarcerated, turned his meticulous hand to colored pencils, producing a hyper-realistic, lush image of a woman’s hand holding a rose in “The Scarlet Fancy.” The fleshy red rose, and the woman’s glossy red fingernail polish, are distinguished from each other by subtle under layers of black.
“He figured these things out on his own,” Paul said.

Andy Wynkoop’s “Economic Redistribution” is a panorama of weirdness inspired by the 17th century Flemish master Pieter Bruegel the Elder, with the cast of “The Wizard of Oz” and Adolf Hitler tucked into bit roles.  While in prison, Wynkoop saw a Brueghel painting on a CD cover and “everything opened up for him,” Paul said.

Bridges and Paul wanted the exhibit to reflect a full range of experiences and emotions, from the anguish and frustration of incarcerated people to their capacity for joy and fulfillment.

“The work is disarming,” Bridges said. “It’s not all gloom and doom. There’s joy, dignity, pride, there’s this inner shining light. It welcomes people in a way that might be unexpected for some visitors.”

Bridges and Paul tailored “Free your Mind” to complement “Per(Sister),” a stunning exhibit on art and incarcerated women, also on view at the Broad. “Per(Sister),” a traveling exhibit focusing mostly on Louisiana women, was developed by the Broad Museum’s new director, Monica Ramirez-Montagut, while she was the director of Tulane University’s Newcomb Art Museum in New Orleans.

“We wanted to bring the conversation back home, to mid-Michigan,” Bridges said.

The subject matter was new to Bridges, so he called Paul, co-founder of a series of annual exhibits of art by Michigan prisoners, now in its 27th year, organized by the Prison Creative Arts Project at the University of Michigan.

Paul said that the longstanding project has enabled thousands of incarcerated people in Michigan to become artists.

“We reach into every single prison in the state,” she said.

Exhibits like “Free Your Mind” complete the circuit by connecting incarcerated artists with an audience.

The benefit is mutual. Paul and Bridges find that viewers relate deeply to the art on several levels.

“These are people that took up art once they got into prison — all kinds of people,” Paul said. “It makes you think: “I can identify with that,’ or even ‘I can do that.’”

At the same time, the patience, focus and persistence of some of the artists on display seem almost superhuman.

In an intricate and symbolic soft sculpture called “Redeemed,” Susan Brown fashioned the head of a deer from 347,929 tiny beads laid over an armature made of easily obtainable materials like toilet paper and glue.

“When people see the incredible skill, and their ability to evoke so many emotions and reactions, they are taken aback,” Paul said. “It makes them reconsider their stereotyped image of people who are incarcerated.”