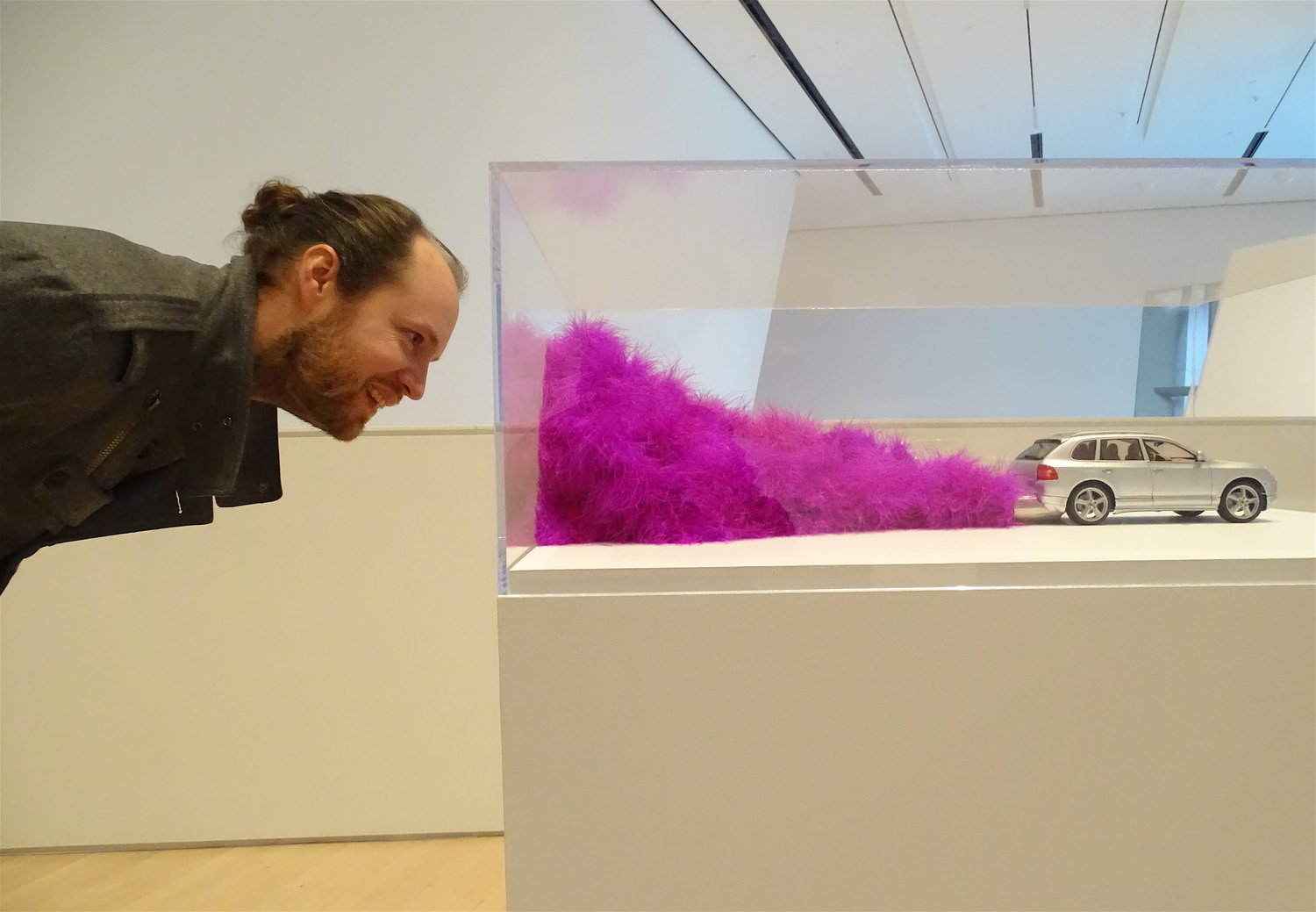 Steven Bridges, seen here at a 2018 exhibit he co-curated at the MSU Broad Art Museum, was named the museum’s interim director on Wednesday (July 6). “If we don’t find a sense of joy in the work we do, then there’s something wrong,” Bridges said.
Lawrence Cosentino/City Pulse
Posted Thursday, July 14, 2022 12:00 am

As interim director, Bridges embodies several of the 'embedded' qualities Stoddart cited, including 'large thematic exhibitions that bring together the collection with large and significant works from other galleries.'”
Lawrence Cosentino

For the MSU Broad Art Museum, a fourth transition at the top position in 10 years is not really a transition, according to key members of the MSU administration, the museum staff and its advisory board.

Monica Ramírez-Móntagut, the museum’s director since July 2020, was named director of Long Island’s Parrish Art Museum in June. Steven Bridges, a six-year veteran of the Broad and curator of several key exhibits, took over as interim director last Wednesday (July 6). The search for a new permanent director will begin in the fall, according to MSU.

Ramírez-Móntagut is widely credited with bringing a wider variety of art, a friendlier face and a strong ethic of connectedness to the university and the community to the MSU Broad.

But these and other initiatives preceded Ramírez-Móntagut’s arrival and will continue after her departure, Judith Stoddart, associate provost for university collections and arts initiatives at MSU, said.

“The Broad has really redirected in the last several years, and Monica’s hiring was part of that redirection. Monica was hired, based on where we saw the museum moving.”

In a parting statement released by MSU, Ramírez-Móntagut said she and the Broad team helped the museum to become “a welcoming institution where many finally felt they belonged.”

Ramírez-Móntagut “will be closer to her family” at the Parrish Art Museum, according to a statement. She has a twin sister that recently moved to New York, among other family members who live there.

“This feels to me like I’m finally coming home,” Ramírez-Móntagut told the online Arts Newspaper.

It’s tempting to conclude that the Broad is under an unlucky star when it comes to directors. The museum’s founding director, Michael Rush, died in 2015 after three years at the helm. His successor, Marc-Olivier Wahler, left the Broad in January 2019 to be in Paris with his wife, who was seriously ill. Ramírez-Móntagut’s tenure lasted only two years.

“This is not an unusual environment,” Alan Ross, who chairs the Broad’s advisory board, said. “In the entire world, directors are in high demand. There’s a revolving door in the director’s position, and all museums are suffering from this right now.” (Ramírez-Móntagut’s predecessor at the Parrish Museum, Kelly Taxter, started as director in March 2021 and stepped down in December of that same year.)

“People are building their resumes, bopping around among organizations,” Jordan Sutton, a member of the museum’s advisory board, said. “It’s just the state of the industry right now. Being in the Midwest isn’t necessarily someone’s final stop.”

“We were sorry to lose Monica, but it’s just one of those things that happens,” Stoddart said. “A lot of our initiatives are not dependent on the director. They’re embedded in the staff.”

As interim director, Bridges embodies several of the “embedded” qualities Stoddart cited, including “large thematic exhibitions that bring together the collection with large and significant works from other galleries.”

Several major recent exhibits, all of which Bridges curated or co-curated, linked art with culture, history and science and included strong local components. “Interstates of Mind” took a deep dive into car culture and mixed fine art with Lansing’s automotive history; “Seeds of Resistance” wove a tapestry of artistic and scientific themes around MSU’s heritage of horticultural research; “Free Your Mind” explored the theme of mass incarceration and included an exhibit of art by incarcerated persons in Michigan. The current “History Told Slant” exhibit features centuries of art from the museum’s permanent collection, including the former Kresge Art Museum, along with major works on loan from other museums.

These and other exhibits involved dozens of connections with a wide range of MSU colleges and local organizations such as the Historical Society of Greater Lansing and the Prison Creative Arts Project in Ann Arbor.

At the same time, the museum has expanded its educational programs, inside and outside the university, to the point where they serve thousands of students a year, from K-12 to post-graduate level.

“Educational programs that reach underserved students throughout Michigan will continue,” Stoddart said. “Those are things the public doesn’t often see.”

Bridges said he hopes to provide a “steady hand in this transitional period” and “not only continue to maintain the relationships we have built over time, but break bread and forge new relationships.”

Sutton said Bridges is “not a placeholder.”

“It’s important to me that he does live here and his family is here,” Sutton said. “He understands what people are looking for, and he’s been a great listener throughout the time he’s been here.”

Bridges has lived with his family on the east side of Lansing since he arrived here six and a half years ago.

“In past situations, when we’ve had a gap, a need for an interim director, I’ve felt that it’s held up progress,” Sutton said. “Not this time. Steven has a vision that is both global and local. He’ll continue to look in both spaces for connections that fit that vision.”

While he plans to keep up his curating work, Bridges looks forward most to weaving the Broad more closely into MSU and the broader community.

“I find great joy in connecting with people and learning what they appreciate, and sometimes what they may not appreciate, about the work we’re doing,” Bridges said. “That’s work I would have done regardless of being interim director. There’s incredible opportunities for growth in the coming months and I look forward to all of it.”

A lasting legacy of Ramírez-Móntagut’s tenure is the Open Storage Project, a 4,000-square-foot space in the Broad’s lower level that will display 5,000 works from the museum’s permanent collection, formerly the Kresge Art Museum collection.

Bridges thanked Ramírez-Móntagut for “making that dream come into a reality.”

“For me, that responds meaningfully to one of our longer-standing issues, which is to have a more permanent place for our collection,” Bridges said. “Monica deserves the entire credit for it, and I was a huge supporter. Now we have the ability to carry it forward and make sure we do it right.”

Bridges hopes construction will begin in “a year to a year and a half” after a carefully considered design process.

In the meantime, the Broad’s 10th birthday blowout show, beginning Sept. 10, promises to be a spectacular parting gift from Ramírez-Móntagut. The exhibition will showcase a panoply of objects designed by the Broad Museum’s visionary architect, the late Zaha Hadid, from a prototype automobile to jewelry, clothing, furniture and other objects, with sketches, paintings and videos of designs and product concepts. The one-of-a-kind fusion of a museum building and its contents was co-curated by Ramírez-Móntagut, who is also an architect, and Woody Yao from Zaha Hadid Design.

A search committee for a permanent director will probably be formed in the fall, according to Stoddart.

Ross said he’d like to see a director “who comes with years of experience in the director’s role, who’s been at some well-known institutions, who knows what it takes to put a show together.”

He contrasted these criteria with former directors Michael Rush and Marc-Olivier Wahler, whose expertise he described as “very specific.” Both directors had strong backgrounds in contemporary art.

“I want to see someone who understands all the genres, from ancient antiquities to contemporary art created last week and emerging artists that are barely known,” Ross said.

“You hire a director based on the vision that you hold for the museum,” Stoddart said. “Our goal is for the Broad to be a community engaged institution, and that’s what we’ll be looking for, whether it’s someone coming from the region or someone from further away.”

It’s unlikely that the Broad will hire another high-concept contemporary art theoretician like Wahler, who hit town with a splashy, magic-themed exhibit when he took over the Broad but failed to deeply connect with MSU and the wider community.

In a June 8 story on Ramírez-Móntagut’s selection as director of the Parrish Art Museum, The New York Times’ Zachary Small pointed out that regional institutions like the Parrish have struggled to recruit and retain leadership in the pandemic era, as “visitors have come to expect their museums to act more like community centers, with a greater emphasis on local programming and representation.”

Stoddart said that’s part of a broader trend in the museum world.

“I’m seeing a shifting in the kinds of directors that museums are hiring,” Stoddart said. “They are looking for museums to really understand their connection to where they’re located.”

With his extensive local connections, Bridges is an obvious fit, but he hasn’t decided whether he’ll apply for the permanent director’s post.

“Of course, it’s on my mind, but at this point, I really can’t say,” he said. “I’m still grounding myself in the current moment we’re in, and there’s a lot of work to be done.”

Rewarding resolutions that won’t require a major commitment of time

From the motorcycle to the stage