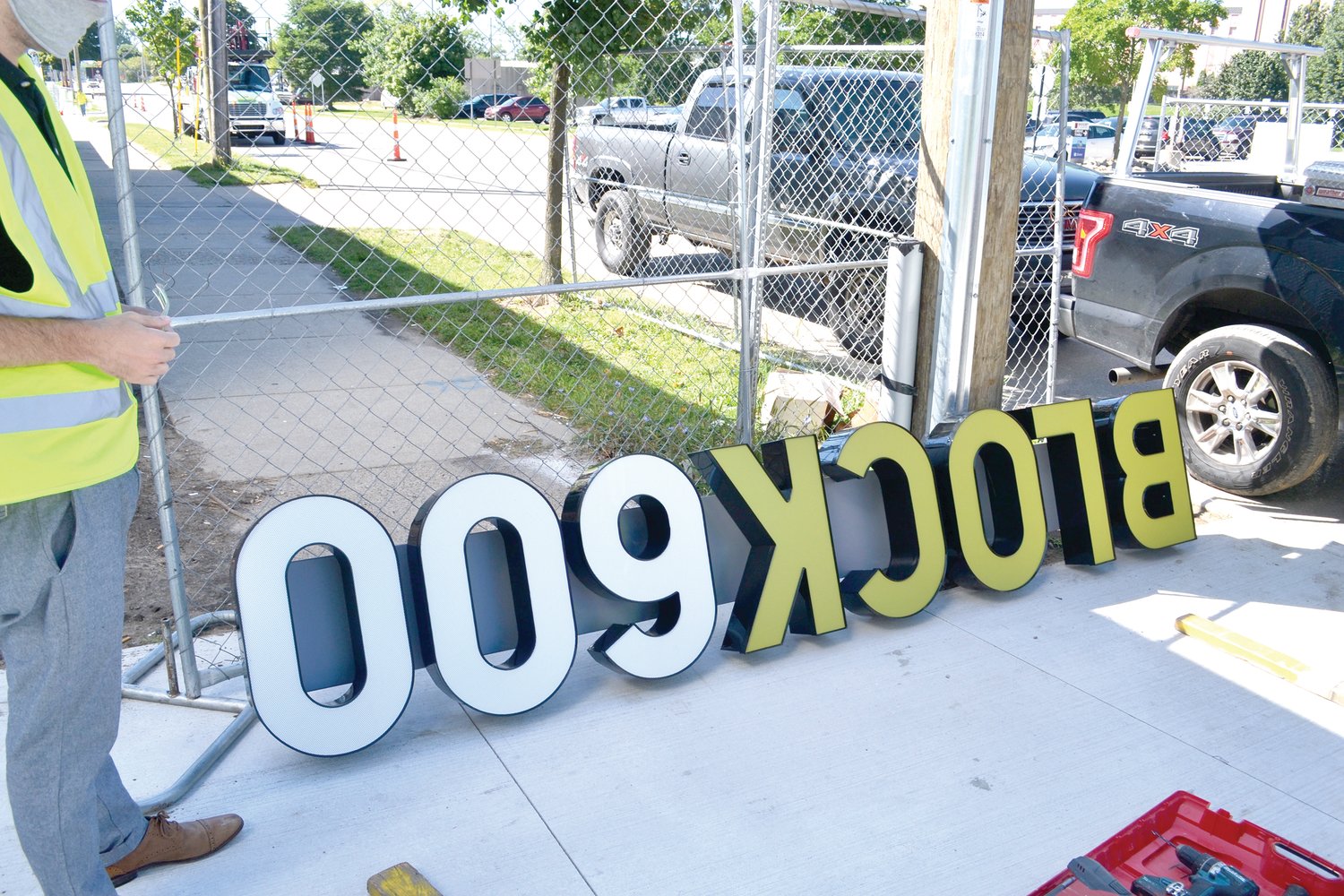 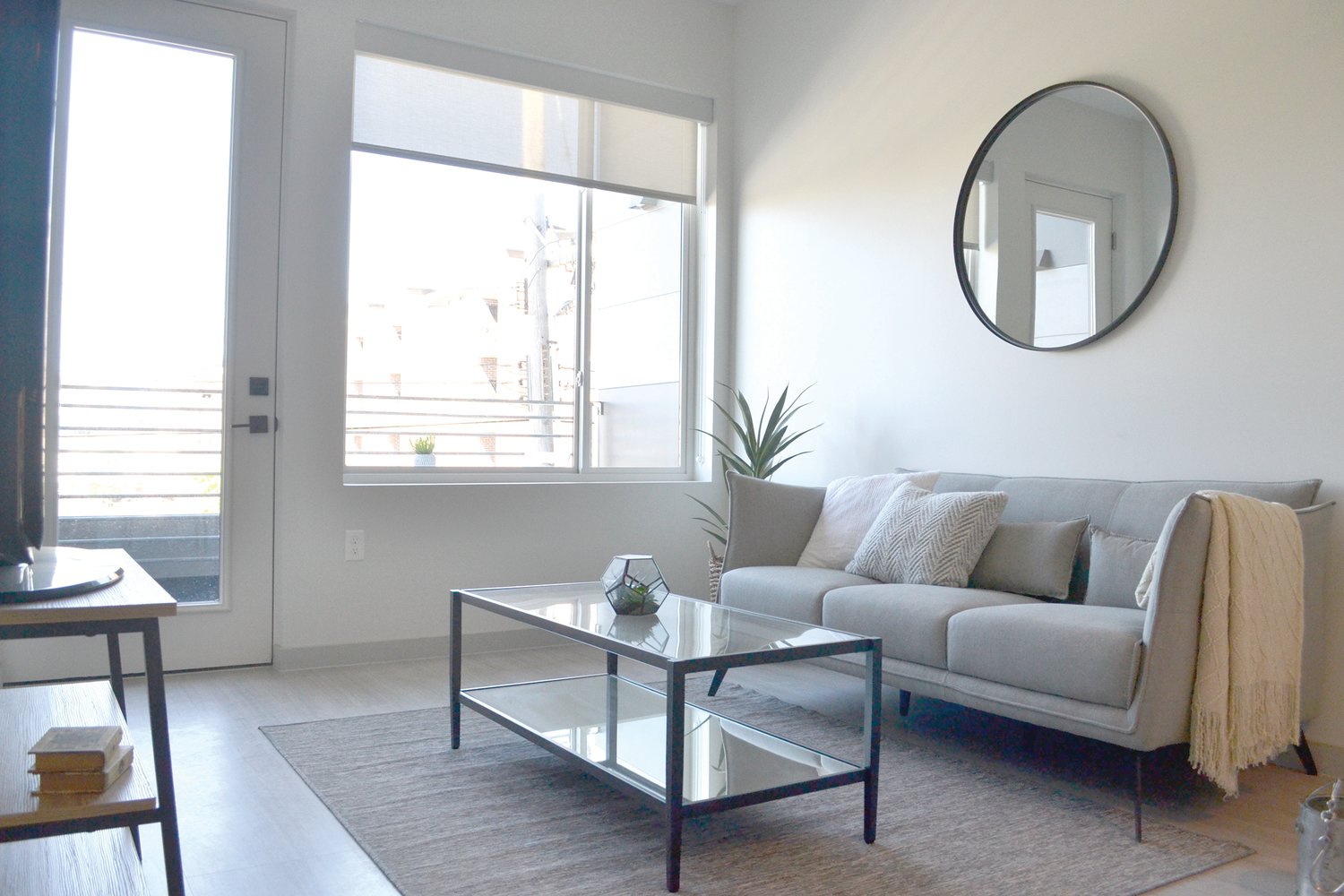 The living room opens onto a balcony with a western view of downtown.
Skyler Ashley 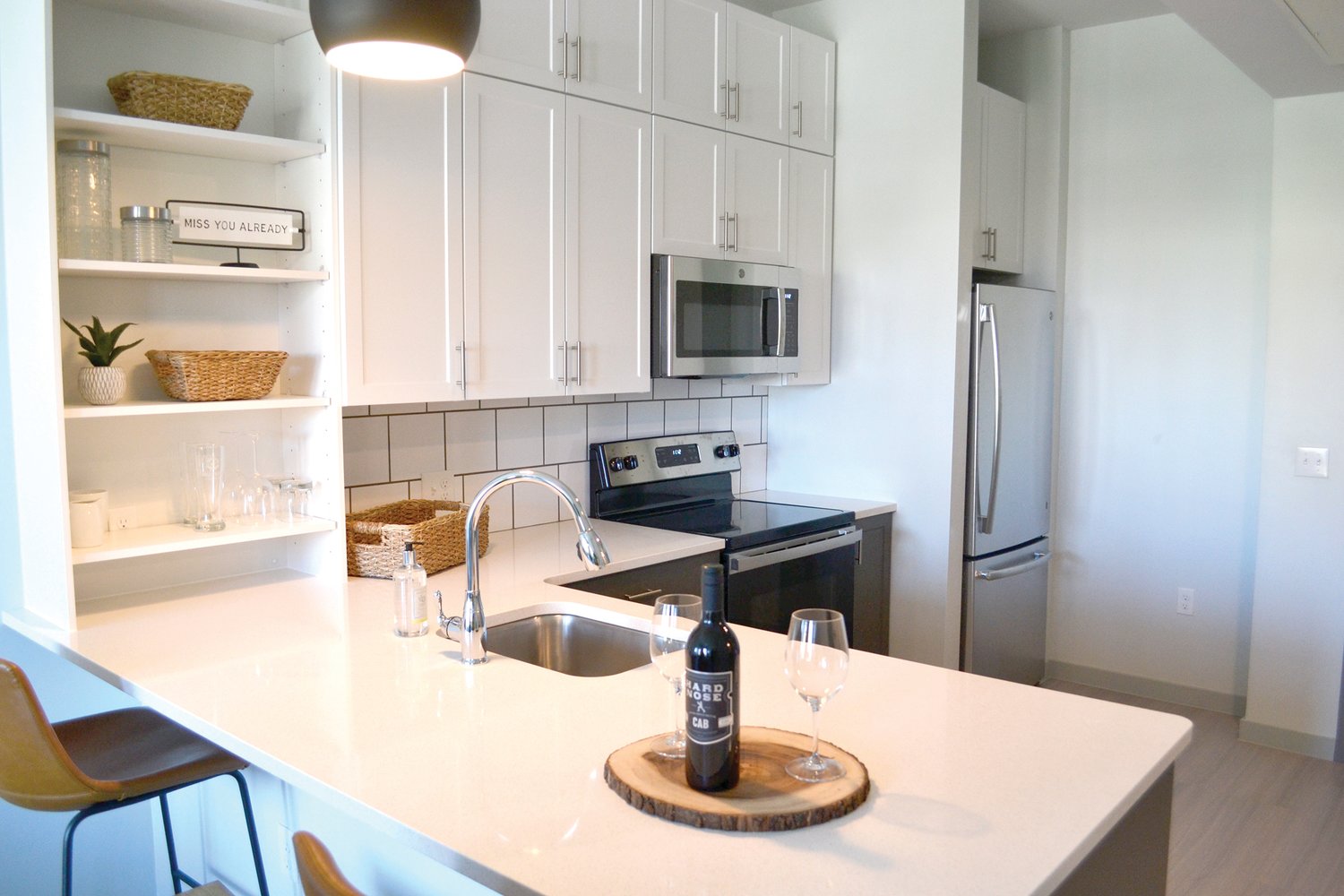 The kitchen of a model apartment in Block600.
Skyler Ashley 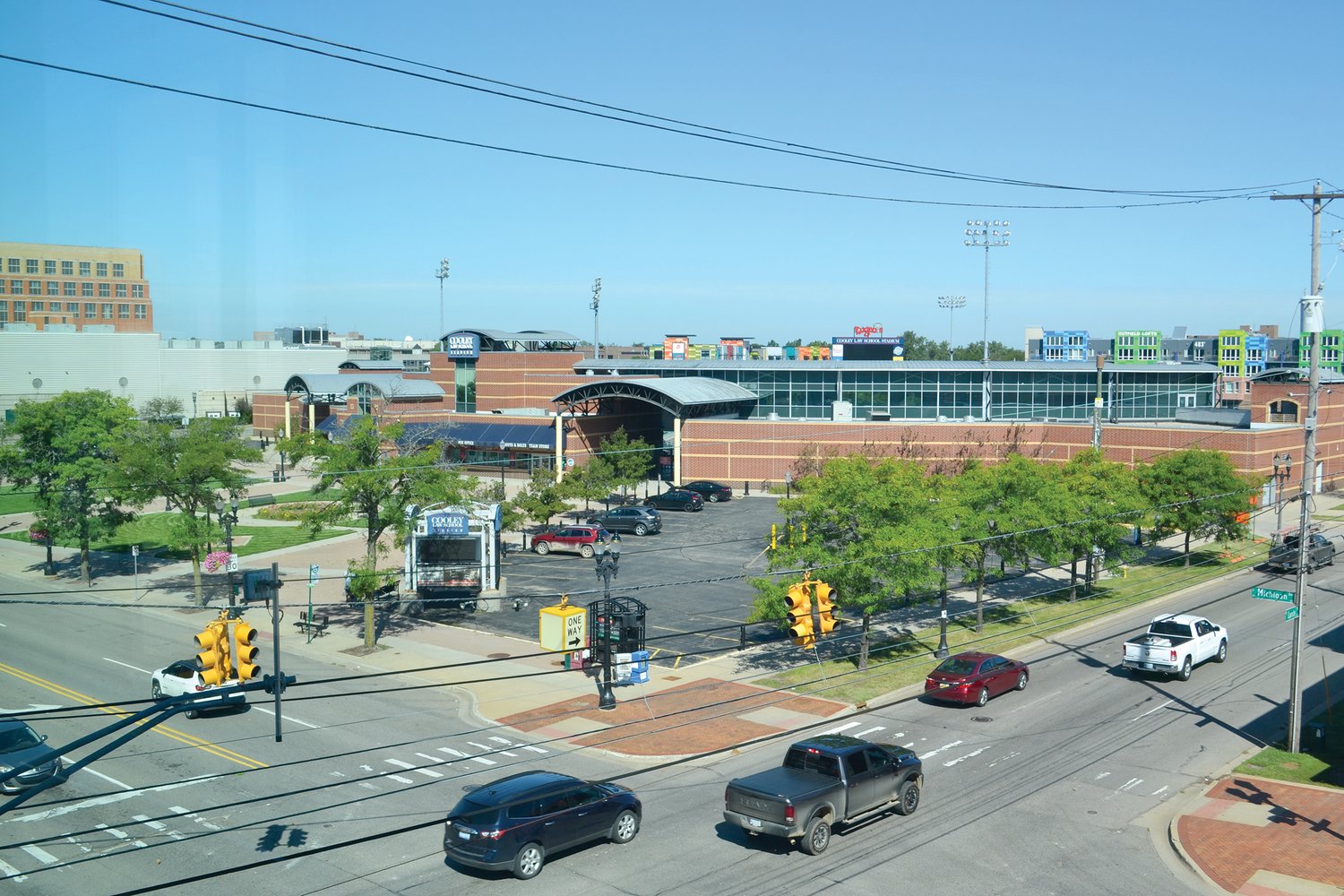 The view from one of the two two-bedroom apartments, which are the corner units at Michigan Avenue and Larch Street.
Skyler Ashley
Previous Next
Posted Friday, September 11, 2020 3:42 am
Kyle Kaminski

Forty apartments overlooking the Stadium District are available for lease as construction nears completion on a grocery store and the first hotel to come to downtown Lansing in two decades.

The BLOCK600 project, as it’s now officially branded, was billed last April as a “gamechanger” for the city by its developer, Pat Gillespie. Now, several months and the throes of a pandemic later, the project is nearing the finish line as contractors work to get things wrapped up before the winter months.

Only time will tell if the development will live up to its lofty expectations, but hopes are high after City Pulse took a tour of the unfinished project last week. A mix of studios and several one- and two-bedroom apartments (about a dozen already leased) are set to open in early October. The grocery store — a Meijer in a sleek, urban market format — is expected to follow soon after.

A Marriott Courtyard hotel attached at the eastern end is slated to open in January or February.

“We’re really happy with where we’re at,” Gillespie said. “To be shut down for eight weeks — because of the pandemic shutdown —put a little hiccup in our schedule, but we’ve managed to keep things on track. We’re excited to get it all open. With the landscaping and the signage, it’s all looking better than I thought it would be.”

Even the studio units, with just fewer than 500 square feet, offer some surprisingly spacious open floor plans at $870. Balconies and street views are reserved for larger units. One-bedrooms start at $1,150. Two-bedroom units are 1,150 square feet and start at $1,820.

A mirrored room is set to be filled with shared exercise equipment for tenants. Another room is filled with shelves for bike storage — an essential feature for quick downtown trips. A shared patio space will also offer room for residents to gather, socialize and drink on the second floor.

An alleyway built out back will also provide outdoor seating for residents and guests alike. And the most convenient feature? A staircase and elevator that lead directly down to the soon-to-open grocery.

While it’s technically a Meijer-branded store, don’t expect any traditional big-box vibes. It’ll be at least the third iteration of the chain’s “urban format” store in Michigan, which feels more like an indoors farmers market with fresh food and a major emphasis on locally sourced items.

Capital City Market will also still carry a traditional lineup of some Meijer-branded items, but it’s clearly designed to tailor to hip shoppers more likely to be found at places like Whole Foods.

Murals and historic photos of the city are scattered throughout the store. Bay doors along Michigan Avenue lead to an expansive produce section. A beer and wine section is adorned with signage from local breweries and distilleries. A keycard elevator leads to the apartments. (Meijer and Marriott did not allow photos.)

On the eastern side of the building, crews are also still hammering away at 122 hotel rooms. A parking lot out back will include 64 spaces for tenants and 122 spaces for the hotel. Another 100 spots will be available for grocery shoppers, who can have their passes validated at checkout. Another 12 metered parking spaces will also open on the southern side of Michigan Avenue.

The Gillespie Group bought out 21 separate parcels over four acres — including an old gas station and the old Brogan’s Tire & Auto Service — to make the project possible. Developers also secured more than $10 million in Brownfield tax-increment financing to bring it all together.

That plan was approved by the Lansing City Council in 2018. And officials at the Lansing Economic Area Partnership said additional steps — like approval from the state Department of Environmental Quality — have long been approved. Gillespie also said he signed a 20-year lease agreement with Meijer and also solidified a purchase agreement to sell the hotel portion.

Requests for tax incentives are typically a controversial hurdle for developers, but Gillespie pointed to extensive environmental contamination to justify them. Several petroleum tanks needed to be removed. The homes swallowed by the project were also filled with asbestos.

About 15 jobs are expected to be created at the grocery store along with a “fair amount” of staff to operate the hotel and to staff the apartment complex. Gillespie also followed through on a promise to use as much locally sourced labor as possible during the ongoing construction.

Visit block600lansing.com for more details or to apply for an apartment lease.