Appointed sheriff of Shiawassee Co. was convicted of drunk driving 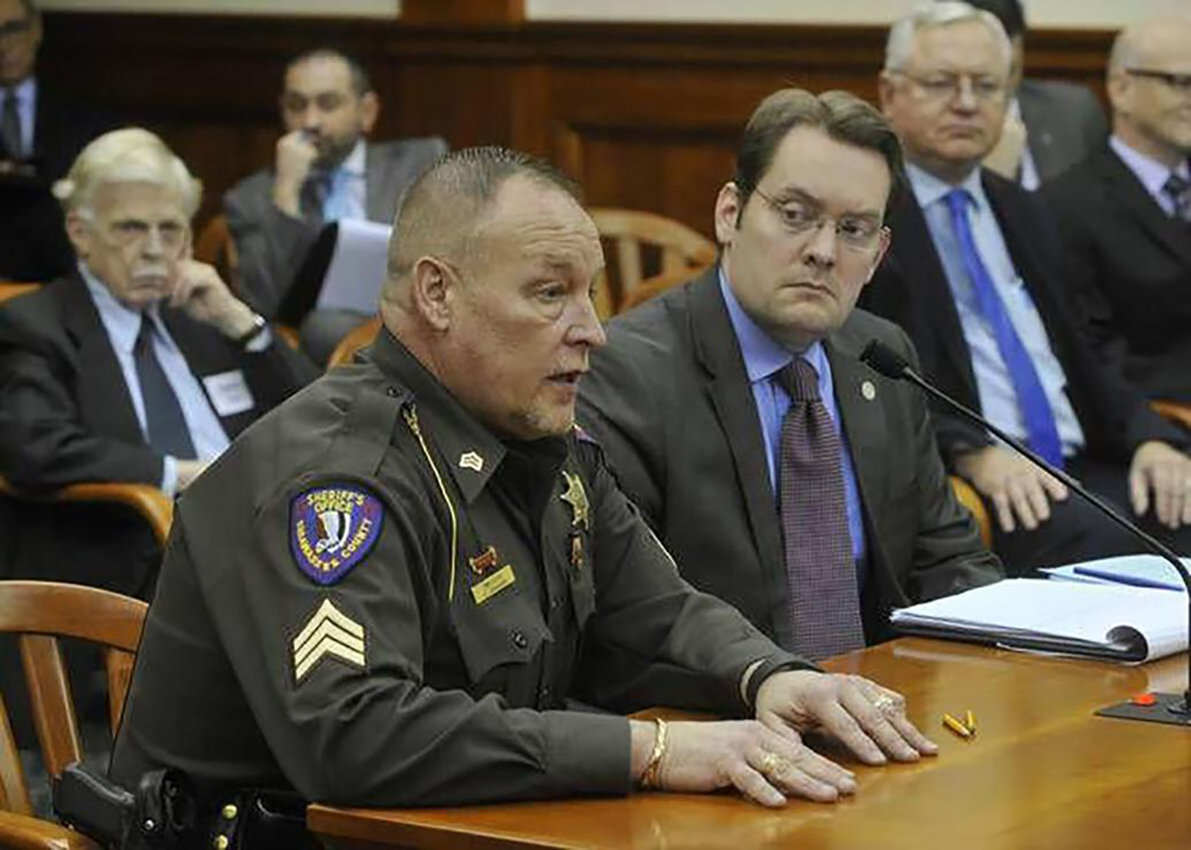 Shiawassee County Sheriff Doug Chapman, left, is shown testifying before the Michigan House Judiciary Committee in 2017, when he was a sergeant in the Sheriff’s Department. Seated to Chapman’s left is Rep. Ben Frederick, R-Owosso, whose term ended Jan. 1.
Photo courtesy of the (Owosso) Argus-Press
Posted Thursday, January 12, 2023 12:01 am
Todd Heywood and Berl Schwartz

(Correction: This story has been updated to correct an error in an earlier version that gave the wrong amount of the fine imposed on Shiawassee Sheriff Doug Chapman for a drunk-driving conviction in 2018. He was fined $150, not $685. With court costs, he was ordered to pay $685. )

The new sheriff of Shiawassee County was appointed to the position despite a drunk-driving conviction and without its disclosure during the selection process.

At least one member of the selection committee, Shiawassee County Clerk Caroline Wilson, was unaware of the arrest and conviction when she voted for Russ Chapman, she told City Pulse Tuesday. The other two members, county Prosecutor Scott Koerner and Probate Judge Thomas Dignan, did not return calls.

Chapman, 59, replaced Brian BeGole, who was elected to the state House of Representatives in November. Chapman will serve through 2024.

According to a Michigan State Police arrest report, troopers were dispatched to I-69 at M-71, which is the Durand Corunna exit, after midnight due to a vehicle blocking the entrance ramp. They found Chapman passed out at the wheel of a 2011 Chevrolet.

The report said that when asked how much he had had to drink, he replied, “Too much.” He refused to cooperate with troopers for a roadside sobriety test and was arrested, then taken to the Flint MSP Post, where he was tested. His first test registered .19 and second one a few minutes later .17. Under Michigan law, .08 is considered intoxicated.

Searching his vehicle, troopers found a silver .38 caliber revolver that was loaded with five hollow-point bullets, the report said. Troopers also found a .40 Glock, which is a semi-automatic pistol. It, too, was fully loaded with eight rounds of ammunition. However, no ammunition was chambered, meaning it could not have been fired without sliding ammunition into the chamber.

After his arrest, District judges Ward Clarkson and Terrance Dignan (a relative of the probate judge) and Shiawassee County Prosecutor Deanna Finnegan recused themselves, so the case was moved to Ingham County, where it was heard by 54-A District Judge Louise Alderson in Lansing.

In a plea deal with the Ingham County Prosecutor’s Office, the firearms possession charge was dismissed. Both weapons were returned to him.

For a first offense for driving while intoxicated with a blood alcohol test showing a level of .17 and above, the penalty under Michigan law includes up to a $700 fine and up to 180 days in jail.

Chapman was sentenced to a $150 fine, plus fees, for a total of $85, and nine months’ probation. The court record shows on May 7 that Alderson granted a motion to end his probation. Chapman retired from the Sheriff’s Department in 2020. But according to MLive, Chapman returned to work in court security at the request of then-Sheriff BeGole.

After BeGole was elected to the House on Nov. 8, the three-member panel was formed to choose his replacement, as mandated by state law.

In a public notice dated Nov. 28, the panel announced that it would convene Dec. 1 “to begin the process of filling the upcoming vacancy of the Shiawassee County Sheriff’s position.”

According to the appointment committee’s minutes, the group named Koerner as chair and established a timetable that set Dec. 9 as the application deadline and Dec. 13 to review applications for interviews on Dec. 20.

The panel said it was looking for “a strong history of law enforcement, proven leadership, overseeing budgeting and personnel, jail administration and procedures and Michigan Commission on Law Enforcement Standards (MCOLES) certification preferred.”

Three candidates applied. Besides Chapman, they were Joe Ibarra, an auxiliary officer with the Owosso Police Department for a decade, and Kevin Rathbun, who ran against BeGole for state representative in the GOP primary. Rathbun cited experience as a military police officer in Virginia.

However, their interviews never took place.

Asked why the panel decided, when it met again on Dec. 13, not to conduct interviews, Wilson, the county clerk, said that only Chapman had the experience they were looking for, so they chose to cut the process short.

Wilson also said that Dignan, the probate judge, sought to recuse himself at some point in the process, although she did not know why. But she said that Koerner, the chairman, said that was not permitted under the state statute. All three voted for Chapman.

Wilson said that while she was unaware of Chapman’s record, it would not have changed her vote.

“It was four years ago,” she said. “If it was a continuing problem, clearly we would have needed to assess it.”

Ibarra, one of the candidates, questioned the process.

“It’s like they make up the rules as they go, change them as they want to or need to at whim,” Ibarra said.

However, he added that “they did get advice from the county attorney that moving ahead with the appointment would not violate the Open Meetings Act” after the panel decided not to conduct interviews.

Lisa McGraw, an executive with the Michigan Press Association, still questioned the process, though.

“If I were a resident, I would feel well within the legal confines of the requirement of the Open Meetings Act to bring a lawsuit on this arguing the statutory committee on Dec. 13 violated the Open Meetings Act. I suspect I would win, but there is no case law to point at right now on this particular question,” McGraw added.

Chapman declined to be interviewed.

An MLive-Flint Journal story on Dec. 13 reported that Chapman said he was “surprised” by his appointment since he had expected a round of interviews.

The article said Chapman indicated he would run for the office when it is on the 2024 General Election ballot.

About the job, he said, “I’m excited. I feel that this is a huge responsibility. I love the people of this community and I’m going to do my best to make sure every individual in this county is safe and I’ll do my best as sheriff.”