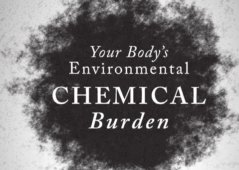 Have you looked under your sink lately? What about your laundry room or your medicine cabinet? What’s in those multitudinous sprays, creams and lotions could be a detriment to your health.

For example, Johnson & Johnson are on the hook for $4.7 billion in damages after a lawsuit found that their baby powder contributed to ovarian cancer found in 22 women.

Cindy Klement, an Ann Arbor health care practitioner and adjunct professor at Eastern Michigan University, has published “Your Body’s Environmental Chemical Burden” to help consumers navigate the tricky or even unpublished ingredients of the products we consume.

Take one product with these ingredients: sodium monoflourphosphate, dicalcium phosphate dehydrate, glycerin, sodium lauryl sulfate, cellulose, gum, flavor tetrasodium pyrophosphate and sodium saccharin. Should consumers be putting this in their mouth to brush their teeth?

Klement, who has worked for more than 40 years as a nutritionist, herbalist and integrative health specialist in Ann Arbor was inspired to write the book after she began researching a phrase she came across in her work.

“I attended a lecture where the speaker mentioned the body burden. At first, I thought it was referring to excess body weight or an emotional burden,” she said.

That was until she put the phrase into the search engines at Eastern Michigan and more than 420,000 research articles on the subject appeared. Today a quick search uncovers 180 million citations.

“I was scrolling through the results and added the search term 'environmental' and that’s when I really became alarmed,” she said.

The articles mostly referenced the possibility of chemicals in the body causing health problems.

Scientists have known for a long time about the impact on people that exposure to certain chemicals have — the impact of mercury, lead and benzene are the most obvious. Think about the phrase “mad hatter” or the pioneering work Rachel Carson work did on DDT.

These often work-related exposures are the most well known, but what about the chemicals we use every day to keep our hair in place, to eliminate wrinkles and to make our world smell better?

Do they have an impact on a person’s health? That’s the question Klement set out to answer when she took a simple blood and urine test to determine the toxic core effect of chemicals on her body.

She said she was 60 at the time and had been eating only organic food since 1979. Despite her healthy lifestyle she said there were some results that ranged in the highest percentiles.

The result is a 266-page book filled with ideas, citations, resource guides and websites where readers can take even a deeper dive into the effects of toxic exposure.

For example, readers can research products they have in their own homes or before they buy replacement products on the National Institute of Health website: hpd.nlm.nih.gov.

On the site, you can browse products by category such as pesticides, personal care and arts and crafts. For example a quick search of finger paint shows that “chronic inhalation has resulted in benign pneumoconiosis.”

There is also a website (www.ewg.org/skindeep) where consumers can learn more about the toxicity of products that are used on the skin such as sunscreen, perfume and makeup.

There are also numerous websites where consumers can download a phone app, which enables them to scan bar codes on products to see where they stand in relation to toxins in the products they use or are thinking about using.

The author remembers using the app while sitting on the floor of Whole Foods and scanning more than two dozen home cleaning products before she found one that met her requirements.

Klement said she is especially concerned about the millennial generation’s exposure to chemicals and their toxic buildup, which could be passed on to any children they may have.

She said her reason for focusing on millennials is “they came into the world with toxicants already in their system.”

“They have to detox before they have families,” Klement said. Otherwise, the umbilical cord acts as a conduit for chemicals into the baby’s blood. Recent research in this area found 287 chemicals in a sample group’s umbilical cord blood.

Klement said this toxic buildup, which can be transferred to the child, is contrasted with the baby boomer generation that came into the world with relatively few if any toxicants in their systems.

Klement said she is not afraid to be called a ‘quack’ for her beliefs.

“I know I will,” she said. “I started as an herbalist and was written up as doing witchcraft. There is nothing in the book I can’t prove,” Klement said.