Alleged Whitmer plotters had interactions, ties to other militias

Three of the accused were associated with other Michigan groups 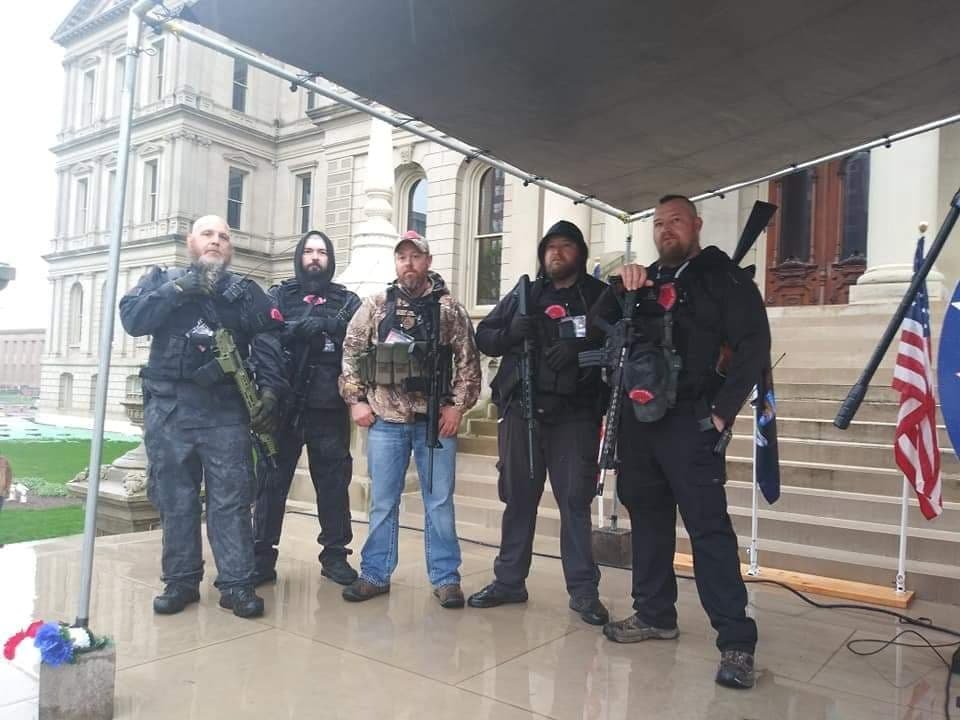 Five members of the Michigan Liberty Militia pose for a photo on the steps of the Capitol April 30 during protests against Gov. Gretchen Whitmer's lockdown orders. From left, MLM Commander Phil Robinson, two unidentified individuals, William "Bill" Null and Michael "Mike" Null, twin brothers from Plainwell and Shelbyville. The Nulls have been charged in the alleged plot against the governor.
Courtesy Michael Lackomar
Posted Friday, October 9, 2020 8:17 pm
STAFF

FRIDAY, Oct. 9 — While much of the focus of the allegations of a bizarre kidnapping plot involving the governor has been on the unknown group Wolverine Watchmen, at least three of the defendants in the plot had ties to other militia groups in Michigan.

The Nulls, 38, were often with Phil Robinson of the Michigan Liberty Militia. One of the twins was pictured standing in the balcony gallery of the state Senate during protests earlier this year. The protests were related to Gov. Gretchen Whitmer’s COVID-19 executive orders. They are pictured in black uniforms with the red insignia of the Michigan Liberty Militia clearly visible in the picture taken by a senator from her seat on the floor as well as in a photo provided to City Pulse taken by Lackomar that day.

“Bill always stuck very close to Phil (Robinson) and Mike would always kind of positioned himself on the peripheral almost like a look out,” Lackomar said.

Lackomar says he and his fellow militia members saw the Nulls and Robinson at various events this year.

“We just saw them at their events that were going on,” he says. He said they showed up at a Black Lives Matter event in Sterling Heights this summer.” The entire MLM showed up for that.”

Bellar showed up at events for the Southeast Michigan Volunteer Militia, Lackomar confirmed.

“Paul showed up to our group as a young kid, like 17, 18 years old, I think,” Lackamor said of Bellar, 21. The young man did several of the organization’s training events, but left “to become a firefighter.”

“And then he said he was joining the army and he disappeared for a while,” Lackamor said.

The leader of the Southeast Michigan Volunteer Militlia said he next saw Bellar with Michigan Liberty Militia members at the Capitol during an anti-lockdown protest April 30. That was the same day the Nulls were photographed in the Senate gallery with their weapons.

“I know of a couple of other people that are involved in that Wolverine group, that we have an issue with, and I'm not surprised from them,” he said. That included one individual who logged onto a message board and verbally assailed members, including Lackomar, for doing trainings and classes and not spending more time “in the field.”

“He harassed me because I showed up at a training with a $3,000 rifle and didn't shoot it,” Lackomar said of one person, whom he declined to identify other than to note the person was not one of the 13 charged by state or federal officials in the plot. “He called me an old lazy fat fuck and stuff like that.”

Lackomar eyes the allegations with suspicion, pointing to the arrests of members of the Hutaree Militia in 2010. The members were charged with weapons charges and sedition, but they were acquitted on the sedition charges.

Did group members of the Michigan Wolverine Watchmen have the capacity to launch the detailed kidnapping plan?

Lackomar’s answer: “The main group, I don't know what their capacity is. But some of the peripherals that they've pulled in are very capable.”