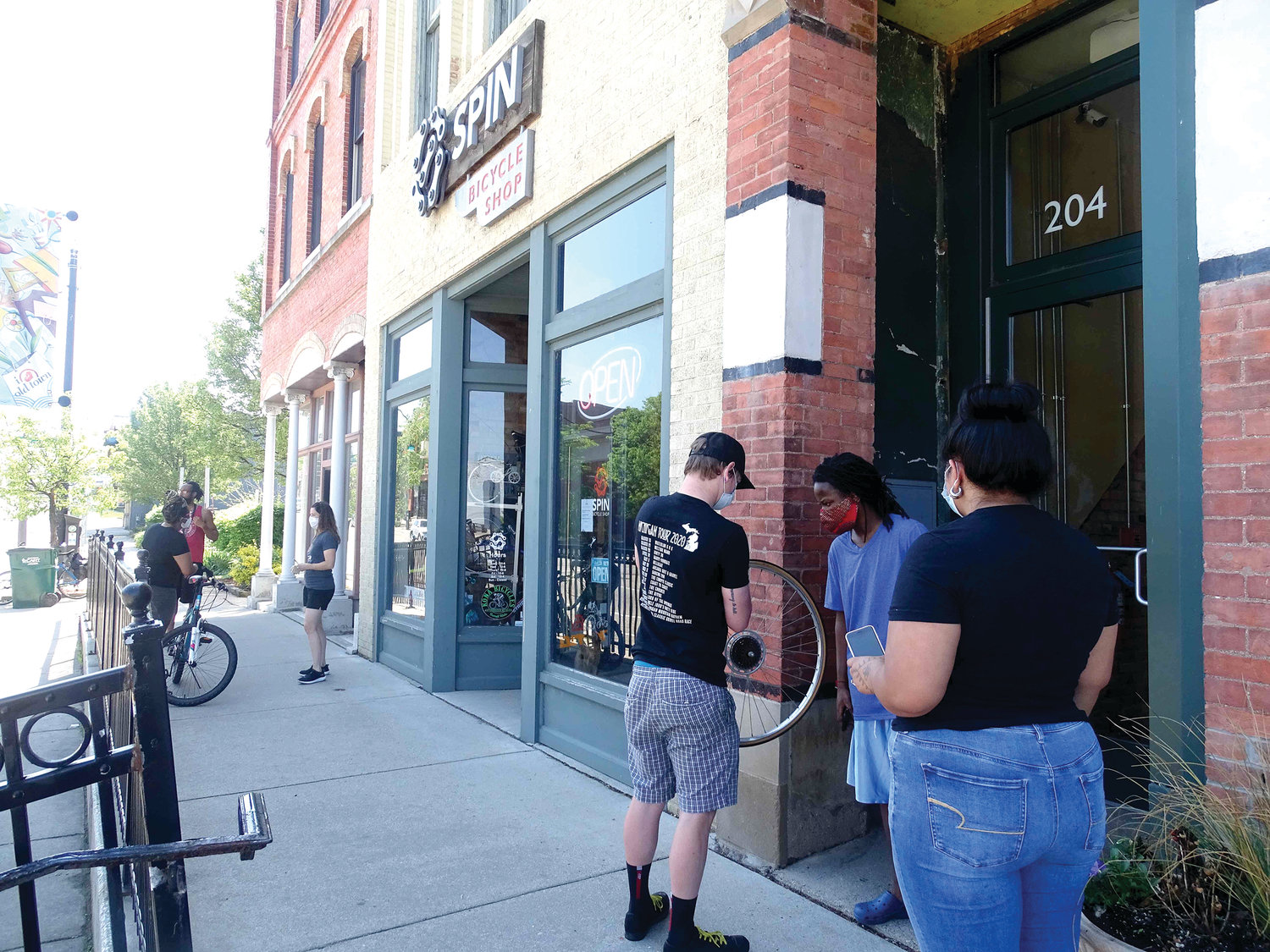 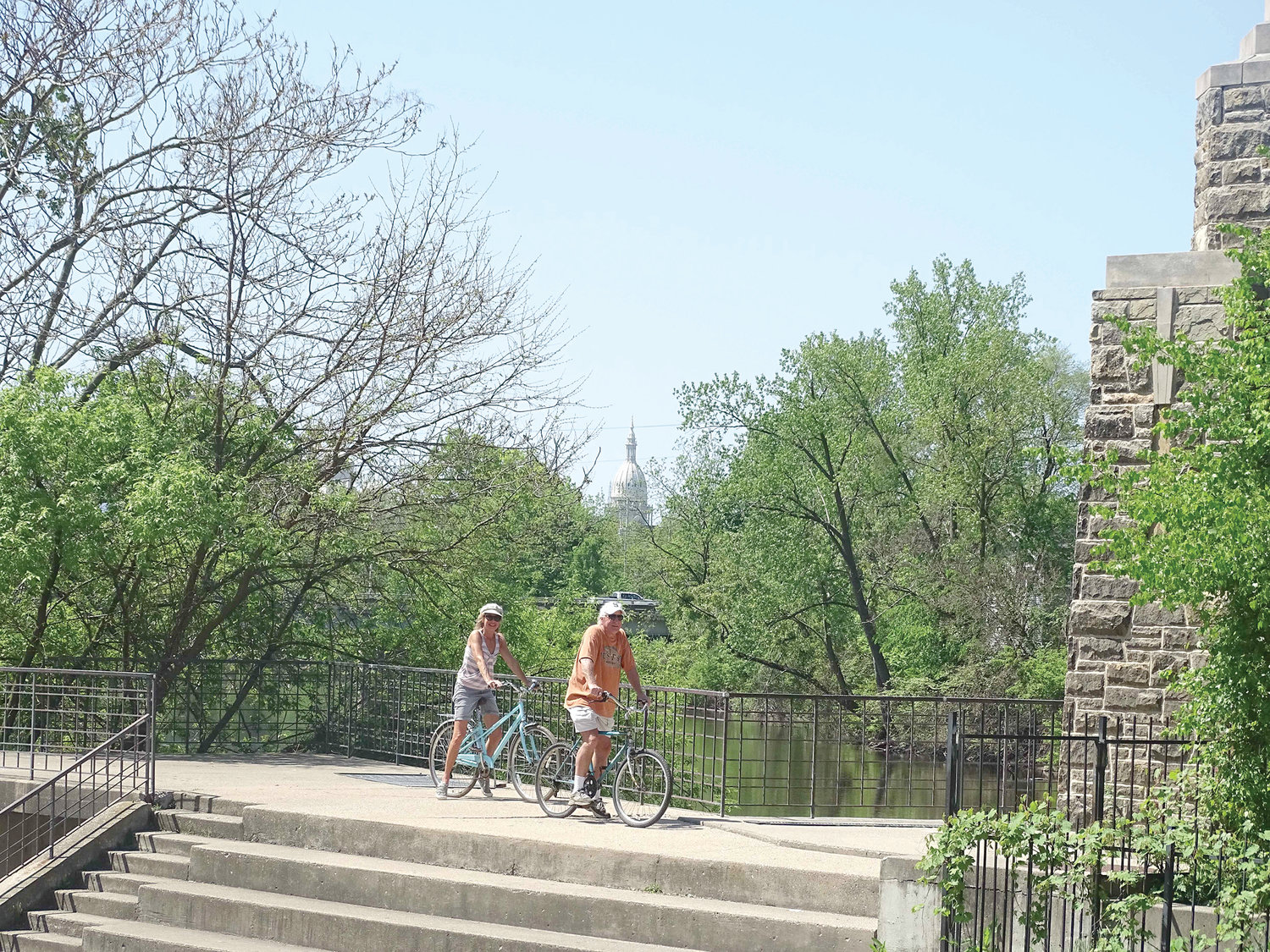 In mid-April, a few weeks into the quarantine era, a large man on a skinny bike wobbled along a downtown stretch of the Lansing River Trail with impressive dignity. He gracefully made the curve north of the Saginaw Street underpass, leaving room for a speedier biker heading south, and turned to me with a smile.

Nothing in this world combines exercise, diversion, travel, philosophy and safely fleeting human contact better than biking. It’s no wonder that this spring, a lot of people are rediscovering the bicycle as a glorious way to shake off the stink of quarantine.

Tuesday morning, a stone’s throw from the Lansing River Trail, knots of masked, socially distancing customers hovered around Spin Bicycle Shop in North Lansing, waiting on the sidewalk and in the street for service.

Co-owner Nicole Cottom said it’s like this at the shop all day.

“We have seen the most amazing increase in recreational cycling,” Cottom said. “Not necessarily people who want to go out and ride 50 miles at a time. They want to enjoy the River Trail, see things they haven’t seen before, ride along with their friends, just slow down and find a new joy. It’s really sad that we can’t sell them any bikes.”

Nationwide sales of bicycles, equipment and repair services nearly doubled compared to March of last year, according to a May 18 story in The New York Times.

The Times reported a “severe bicycle shortage” because of the surge in demand and disruptions to the global supply chain because of the coronavirus pandemic.

“All of the bicycles under $1,000 are sold out across the country,” Cottom said. “We’re having a very, very difficult time getting any bikes at all, and so are all the other shops in Lansing.”

As she talked, employees shuttled in and out the door, bringing out repaired bikes, poring over the proper fit or presenting parts for inspection.

“And the phones are constantly ringing because people are looking for bikes,” Cottom said. “They want to be safe, but it’s very difficult to sell a bike properly over the phone.”

The shop is almost on top of the River Trail, giving Cottom a front-row seat to the surge.

“The River Trail’s been a really important resource that’s been underutilized,” Cottom said. “Finally, it’s just wonderful to see it being used as it should have been used all along.”

New users are discovering the trail every day. On a Memorial Day weekend ride, an excited family zoomed over the boardwalk suspended over the Grand River next to the towering Ottawa Power Station.

“Daddy, this is exactly like Chicago!” one of the kids yelled — so loudly I could hear him from across the river, in Rotary Park.

But Lansing is even better than Chicago for bikers, especially if you’re a bit rusty. In an unhurried 45-minute ride, you can absorb an amazing variety of scenes and terrain, from downtown fireworks to owls hooting in the woods, but the vibe is laid back and the pace is relaxed.

Take the spine of the River Trail system, beginning at the Turner-Dodge mansion at the north end, curling south and east toward the campus of MSU. In less than an hour, the path thread through the vintage shops and rooftop gargoyles of Old Town into the heart of downtown, next to landmarks like the old power station, the ballpark and convention center and the city’s newest pride and joy, Rotary Park.

A bit further southeast, the river bends into the oldest section of trail, purchased by civic visionaries in the 1970s and 1980s who bought up riverfront easements in hopes the day would come when the Grand would be more than a backyard industrial dump. Judging by the modern-day traffic in bikes, walkers and kayaks along the Grand, that day has come.

Another bonus to biking in 2020 is that most of these older sections were repaved last year, thanks to a county trails and parks millage that passed in 2013 and again in 2019.

Pieced together over decades, the east-west heart of the River Trail system is a kind of miracle. Despite its central location and proximity to the river, there isn’t a single at-grade crossing from the Turner Dodge House all to Potter Park Zoo and the wooded area east of Aurelius Road, populated by herons, turtles and sycamores, and further east to the MSU campus.

A southern extension to Ingham County’s Hawk Island Park, about a half hour from the State Capitol, puts you in the company of owls, eagles, deer, mink, pileated woodpeckers and untold wildflowers. Right now, in late May, purple and lavender dames’ rocket flowers are shooting up everywhere, honeying the air.

Further south, the Hawk Island trail hooks up with Delhi Township’s Sycamore Creek Trail and takes you all the way to Holt’s wooded Valhalla Park, with only a few (regulated) at-grade crossings. Another, more workmanlike stretch of the Lansing River Trail zips along the city’s southern edge, follows a utility corridor parallel to Jolly Road, all the way to Davis Park on the southwest side of town.

On each ride this summer, the question will be, where to picnic next? Connecting the city’s parks and attractions is the prime directive of the trail system. Another key River Trail extension spikes due south along the Grand from downtown, through REO Town and the industrial heart of Lansing to stately Moores Park and the Eckert Station, with its hydroelectric dam, a favorite fishing hole. Off the trail, you can bike along shady Moores River Drive further west to Francis Park and the best sunset viewing in town.

Beyond Lansing, there are more gems to discover in the regional trail system, from the path that follows the old Interurban Railroad in Meridian Township to the splendidly resurfaced North Tier trails in East Lansing to the Hayhoe Trail in Mason. Thanks to the parks and trails millage, plans are underway for most of these trails to hook up with the Lansing River Trail, and with each other, and send more tendrils out to Lake Lansing and all the way to the state-girdling Lake Huron to Lake Michigan Trail via a hub in Stockbridge.

Another bonus of the coronavirus era is the reduced traffic on many area roads. Opportunities for long roadside rides, like the scenic trek north along Turner Street’s bike lane to DeWitt and beyond to St. Johns, await more intrepid bikers.

By the time the pandemic dies down and the bike supply replenishes, it’s likely that a lot of people will be incurably hooked.