A ‘caucus of one’

Lansing City Council steers toward unified front with one exception 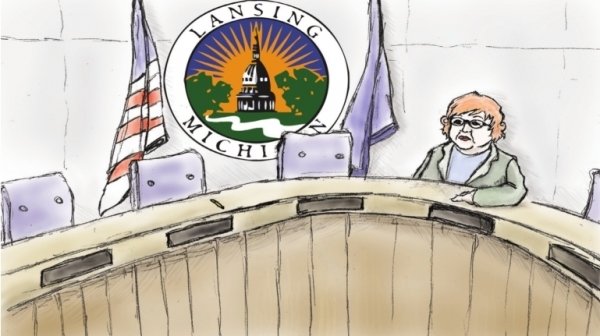 Posted Wednesday, June 18, 2014 12:00 am
BECKY McKENDRY
Something unusual is happening in the chambers of Lansing City Hall: Things are calm.

For the last several weeks, Council has essentially been in lock step with the exception of At-Large Councilwoman Carol Wood.

The results? Last month, the city budget passed with minimal squabbling, albeit the first without a deficit in nine years. The Lansing Police Department got the green light to move from its North Precinct location to the Hill Center on the city’s south side. Alcohol sales at the Hope Soccer Complex were approved. Council also approved the Outfield, a significant development project that will provide repairs and renovations to the Cooley Law School Stadium, alongside private apartment construction just beyond the outfield fence.

First Ward Councilwoman Jody Washington chalks up the progress to a shift in attitude.

“I have had issues with councilmembers but there’s been a calming of some folks,” she said. “I do see us as moving forward.”

Washington said councilmembers have matured in their relationships with one another. Just a few months ago, Councilmembers were at odds with each other over seating arrangements.

“It has been really difficult,” Washington said. “Some of us refuse to engage in things like that.”

Washington also said improved working relationships have helped blur the “factions” that have long plagued council business, with sides aligned against or with Mayor Virg Bernero. Everyone is on board with the idea of “Team Lansing,” made up of a post-faction Council and administration, she added.

As proof, she points to “a substantial attitude change” in relation to her working relationship with Bernero (any improvement in their relationship would have certainly been welcome, considering he once referred to her as former Councilman Eric Hewitt “in drag”).

“If I disagree now, I don’t feel like I’m being attacked,” Washington said.

“It wasn’t the right spirit before,” he said. “We’re not adversaries anymore.”

“This is my third term, and when mayors stay, they tend to get a majority,” he said. “The voters aren’t voting for gridlock. This isn’t Washington. We can’t afford gridlock at the city level.”

“Carol Wood is stuck in the same obstruction of muck,” he said. “Whatever it is, she’s against it.”

Although Wood has mostly stood alone in her recent votes — the exception being Washington voting alongside her against the police precinct move out of her ward — Wood said she doesn’t feel anything has changed within the Council chambers.

“I don’t think it’s much different from years past,” she said. “Things bubble to the surface and create differences of opinions and then it subsides.”

Cyclical as Council’s mood may be, there is no denying that Wood once enjoyed a more substantial backing of opinion when the “pro-Bernero” faction — Councilwomen Kathie Dunbar, Jessica Yorko and Tina Houghton — was the minority.

Wood doesn’t like acknowledging the deep separations of Council. Although she said she never believed in the idea of factions, she does feel alone sometimes in asking enough questions about proposals and plans— a recurring reason cited for her dissenting, and now symbolic, votes.

“Are there times up there when I’m not hearing from Councilmembers and I wish I was?” she said. “Yes, of course. We’re supposed to ask tough questions. To do less than that is not what we were elected to do.

“But people shouldn’t be labeled differently because of how they vote,” she added. “The idea that there are factions or divisions is perpetuated by the press. It’s incorrect.”

Looking forward, Brown Clarke said all Councilmembers have seemed committed to maintaining the positive, “palatable” difference in their working relationships. She said Council will be “definitely” going on a retreat next year to improve working relationships — they originally intended to go earlier this year after the seating chart squabble.

“When there are arguments or we chastise each other, we don’t do it publicly now,” she said. “We don’t wait until the cameras come on. That’s become the tone and the environment.”

“The administration is closer,” she added. “We’re getting information in a timelier fashion. We want to keep this up.”