What Wendy Sylvester-Rowan loves about art 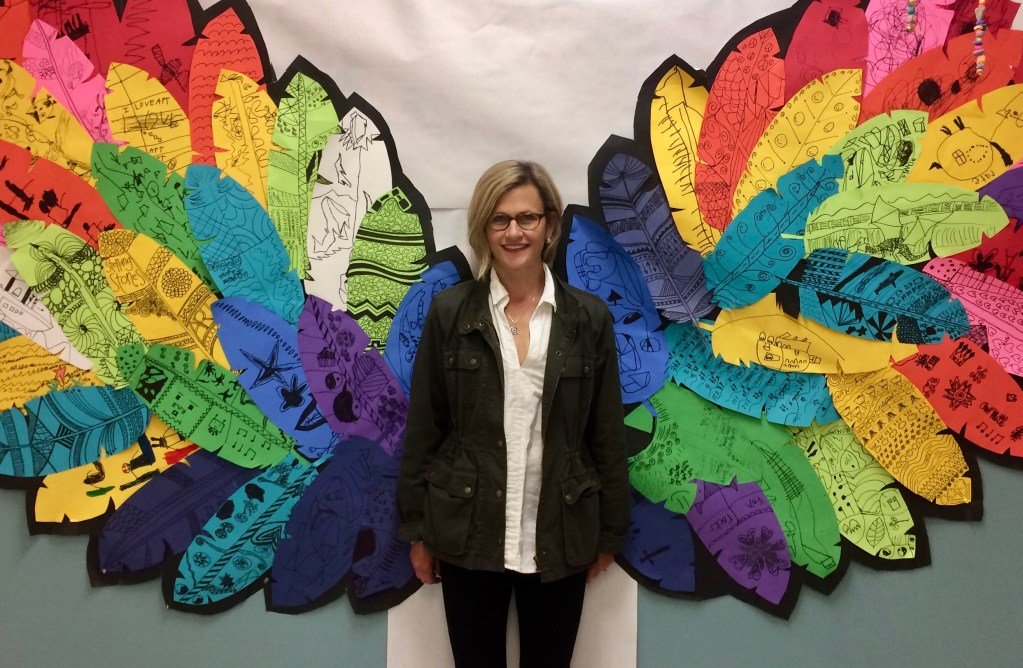 Wendy Sylvester-Rowan fell in love with art once she got her hands on a box of 64 Crayola crayons as a child.

“Art is something that connects all of us,” Rowan said. “It’s something that can provoke so many emotions and unify all of us. I find the arts to be very therapeutic, enlightening. It can be conscious-raising.”

She’s been putting that into practice as a member of the East Lansing Arts Commission for three years, including as chairwoman starting last year. And since she is also the arts programming specialist for the City of East Lansing, she may be the community’s most influential arts leader.

A Pennsylvania native, Sylvester-Rowan was raised outside of Philadelphia, where she grew a passion for both art and engaging with people. She pursued a degree in art education at Miami University in Ohio, where she met her husband, Jake. The pair moved to East Lansing when Jake began a program at Michigan State.

Sylvester-Rowan calls herself a “jack-of-all-trades.” In addition to her work for the city, she has been teaching art at Stepping Stones Montessori for over 10 years. Her two college-aged children attended school there.

“This just seemed like the next logical step,” Sylvester-Rowan said about her public role. “To be able to be a part of what is happening downtown, in respect to the arts, that’s why I joined.”

Art, she said, “can be something that really stirs you, which is something that I find has really enriched my life. And if I can help bring that to other people, I think that’s a wonderful cause.”

“Wendy has helped to nudge the board from a realm of ‘art appreciation,’ where the goal was to curate the city’s art collection, into an ‘artist forward’ direction,” Gregg said. “This arts commission is very interested in engaging the creative class in East Lansing, connecting with local artists and figuring out how to help them thrive.”

Sylvester-Rowan credits the city’s Percent for Art program for the commission’s budget. The groundbreaking ordinance, which went into effect in October 2014, requires any development in downtown East Lansing to put 1% of the budget (up to $25,000) towards the public art fund. A similar effort in Lansing failed when former Mayor Virg Bernero opposed imposing such a tax on developers.

“I would love to see more people applying for our cultural arts grants, and planning public arts events,” she said. “An era of ‘Yes! Let’s do that!’”

One collaborative project was the “Daytime. Nighttime. Anytime.” project with the city. The arts commission helped fund and also printed artwork from schools in East Lansing to hang in shops around town in an effort to help the businesses. Nineteen businesses participated, showcasing artwork from students in kindergarten through 12th grade from both public and private schools in the area.

Because of the pandemic and virtual learning, Sylvester-Rowan felt that students haven’t had the chance to show off their artwork lately. This project gave them the opportunity to not only show off students' artwork to their classmates and family, but to the public as well.

“It was a phenomenal thing for them to take pride in seeing their artwork in a public place, and it also brought community members downtown to hopefully patronize the businesses,” Sylvester-Rowan said. “When you have multiple entities working together for a common goal, to better the community, that really speaks to me.”

Another collaborative project Sylvester-Rowan took part in was called “Street Ghosts,” by artist Paolo Cirio, which went up last fall. The arts commission worked with the Michigan State University Museum to display images of people captured by Google Street View in the exact location they were taken.

Though some months are slower than other months, Sylvester-Rowan says that the commission is looking forward to the nicer weather so that the next project can get started: a mural installation on the side of an Albert Avenue parking garage by Detroit artist Ndubisi Okoye.

As she approaches the end of her tenure as chairwoman, Sylvester-Rowan believes art is the common ground of bringing together a community, especially during a time when people may feel disconnected from each other.

“Art is what makes life exciting. It doesn’t have to match your couch.”