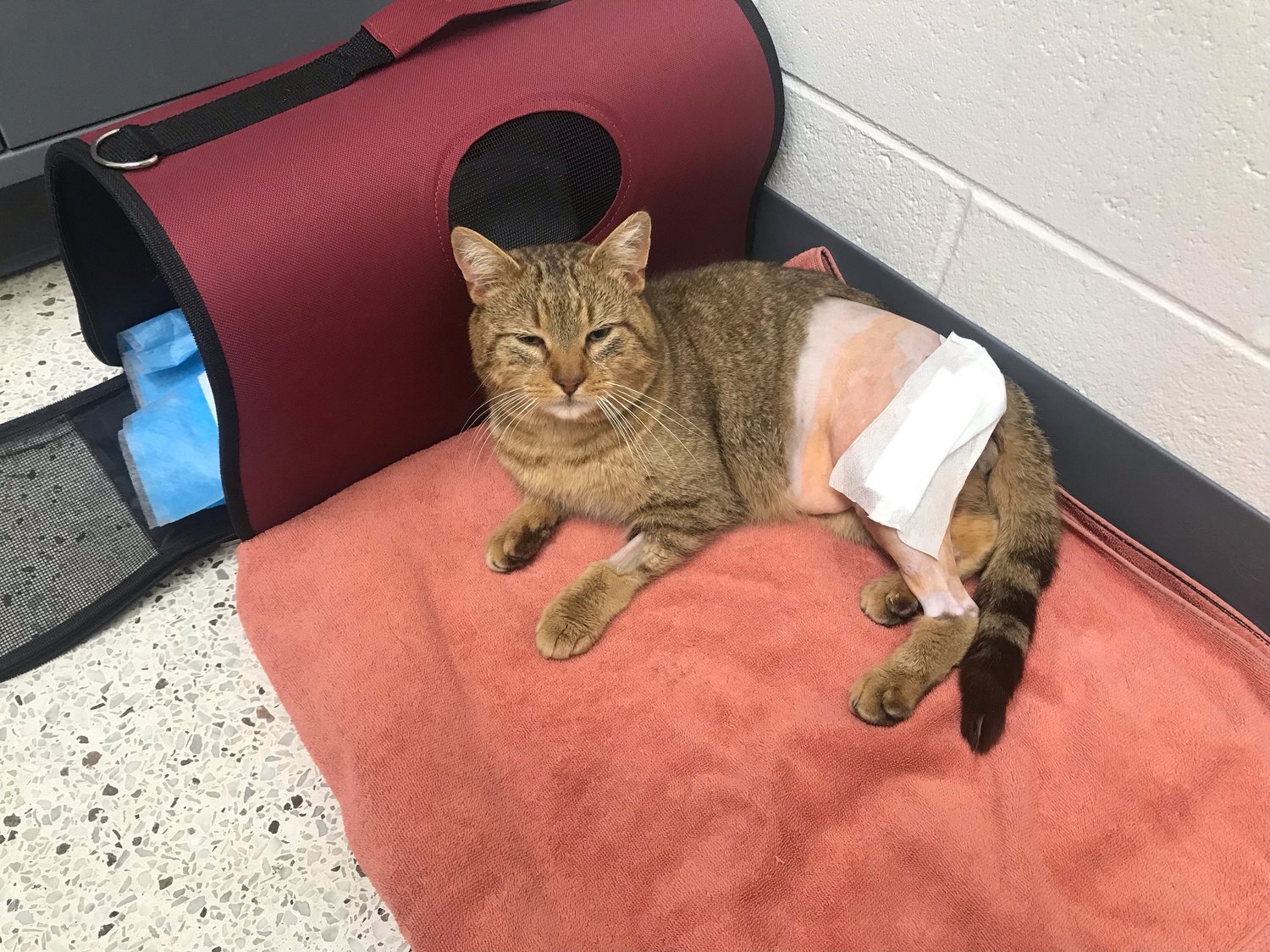 JR is still recovering from surgery after he took a bullet to the leg last week.
Courtesy
Posted Tuesday, April 26, 2022 1:22 pm
Kyle Kaminski

TUESDAY, April 26 — The first feline survivor of gun violence in Lansing has been discovered.

Eastsider Lori Kennedy said a stray cat named “JR,” whom she has cared for since the winter, was found injured from a bullet wound last week near her home in the Potter-Walsh Neighborhood. JR is now on the path to recovery after a weekend surgery, but the mystery remains: Who shot JR?

Kennedy said the stray cat first showed up on her porch on Lathrop Street on a cold February night. Since then, she has been putting out food and water and bonding with the feline. And last week — just before kitty dinnertime — she realized that her new friend was walking with a limp.

“I thought it was a bite wound on his leg,” Kennedy said. “I thought he must’ve been in a fight.”

Top cat doctors at Michigan State University’s Veterinary Medical Center in East Lansing quickly realized that JR was involved in a bit more than a catfight. At some point last week, he took a bullet — a real bullet — to the leg. Without surgery, he would’ve needed to have it amputated.

“He had a really bad fracture, and they gave me two options: Amputate it or do surgery,” Kennedy said.

Kennedy, who works as a schoolteacher in Grand Ledge, said the final bill was about $5,000.

“I just thought it was heartbreaking and didn’t want to see this animal suffer,” Kennedy explained. “I had been trying to find him a home. I would’ve taken him, but I already have three.”

The local cat, who didn’t have a real name before the incident, has since been dubbed JR after the popular 1980s advertising catchphrase “Who shot J.R.?” promoting the TV series "Dallas," a reference to the mystery surrounding a third-season murder attempt against villain J.R. Ewing — except this particular eastside story may have an even more heartwarming real life plotline.

Dr. Karen Perry, who performed the surgery at MSU’s veterinary clinic over the weekend, plans to personally adopt the cat later this afternoon, Kennedy said. It’s a happy ending for everyone.

“RJ is super sweet, loving and really laid back. Everyone fell in love with him,” Kennedy added.

Killing or torturing “companion animals,” including cats, is a felony punishable by 10 years in prison and a fine of up to $5,000 in Michigan. Kennedy said she hasn’t yet reported the incident to the Lansing Police Department or the Ingham County Animal Control. Animal Control Director Heidi Williams told City Pulse that her team will investigate the incident after a report is filed.

Williams said it may be “difficult” to crack the case, but recording the location of the shooting might serve as a clue in future investigations — especially if there’s a cat killer on the loose.

“This is definitely something that we would want to investigate,” Williams added.