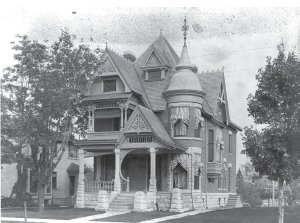 A photo of the Rogers-Carrier House from the turn of the 20th Century or earlier.
Courtesy of CADL Local History
Posted Wednesday, October 5, 2022 5:56 pm
Dawn Parker

In his career as an educator, Lansing Community College President Steve Robinson has been a great many things. One of them, though, has not been a historical preservationist — until now.

It’s a role he relishes learning, as the college begins an effort to properly restore the exterior of the Rogers-Carrier House at 528 N. Capitol Ave., also known as the “Moon House” in honor of architect Darius Moon, the self-taught genius whose works dot mid-Michigan. Last June the trustees approved an estimated $600,000 for the project.

Moon’s noteworthy commissions in Lansing include the Turner-Dodge House. Many of his other houses are long gone, notably the R.E. Olds mansion, which stood at 720 N. Washington Ave.

The project will also relocate an existing flue from an exterior window location through the roof.

The Rogers-Carrier House, built in 1891, is regarded as a prime example of the Queen Anne style of architecture. The style is identifiable by touches like gingerbread, curlicues and ornamental turrets.

Robinson said there used to be a building formerly housing the college’s boardroom between the Moon House and the adjacent Hermann House at 520 N. Capitol, which was restored by Robinson’s predecessor, Brent Knight, as the president’s residence. The two homes and the boardroom building between them jokingly got dubbed the Hermann Conference Center.

“As a college, we’ve really kept (the Moon House) as a historical landmark in the area,” David Siwik, an LCC history professor who has immersed himself in LCC’s backstory, said.

Several departmental offices were formerly lodged at the two houses.

The college has owned the Moon House since 1967 and used it briefly as a bookstore and as office space. Besides the Moon and Hermann houses, the college owns one more historic home, known as the Beck House and was the longtime home of the Michigan Sheriffs’ Association. The Beck House is across the street from the other two houses.

Siwik said that at the time the college purchased the Rogers-Carrier House, the neighborhood wasn’t the best.

“To have a house like that survive … there’s not a whole lot of homes nearby left like that,” Siwik said

While LCC isn’t using the house, the property has been scrupulously maintained.

The improvements would keep the house “in good repair,” Robinson said. The goal is forging partnerships with other area historic preservation groups.

“We’ve had very specific conversations with the Historical Society of Greater Lansing,” he said, with the objective of housing administrative offices and a small “pocket” museum with exhibition space.

It’s not clear how long it will take to complete the improvements, given the difficulty of locating artisans with the necessary skills. Robinson said he believes the work could be done within a year, but that will depend on the price of building supplies and the cost of construction.

Fundraising for work on the interior would be done by the Historical Society. “We haven’t gotten there yet,” Robinson said.

Society President Bill Castanier said the two groups have been meeting regularly over the past six to eight months.

The society would occupy the house as a tenant of sorts, Castanier said, noting they would renovate the ground floor to feature both office and exhibition space.

One part of the first floor would house a research center for the benefit of Lansing-area students. faculty and staff.

“That’s part of the relationship with LCC that everyone agrees is probably the best idea,” Castanier said.

He’s brim-full of exhibit ideas too, including the inaugural, which would detail ordinary Lansing-area residents’ origin stories. (Think about the PBS series “Finding Your Roots.”)

Such an exhibition would naturally include family heirlooms.

“If we talk to someone, we would ask them, ‘Did your family ever pass anything down to you that they had brought with them from wherever they came?’”

Historical Society members, he continued, would be able to work with students and help create projects that would be real-life challenges. Castanier has already been daydreaming about how the two groups could collaborate.

“They could do video. They could do audio,” he said. “We would hope to work with as many student groups as we could.”

In a career that spanned more than 60 years, Moon designed homes for some of Lansing’s best-known residents, including men’s clothing retailer Henry Kositchek and Edward D. Sparrow.

Robinson called Moon “an incredibly significant architect” for Lansing. As for the house, “there really isn’t a better example of that Queen Anne architecture anywhere in the city.”

Moon’s impact was felt all over metropolitan Lansing, including one home originally known as the Woodbury House, now the Howland House co-op at 415 M.A.C. Avenue in East Lansing.

Another Moon work, a two-story brick house, is near LCC’s West Campus entrance at Mt. Hope Road and Sanders Drive.

A recent tenant, Siwik said, was an architectural firm.

The college, Castanier said, has served as good stewards of the Moon House. Robinson related a story about the previous owners of the home, who decided that the distinctive “witch’s hat” turret was dated and unattractive.

Off to the dump the turret went, and what price it fetched the then-owners from the scrap metal dealer is unknown. Robinson picked up the story in the 1980s.

“Our welding students and faculty fabricated the one that’s up there now,” he said. “It’s a great story of the faculty and students at LCC taking ownership of that.”

How does the replacement compare? “They absolutely nailed it. It looks exactly like it did in the 19th century,” Robinson said.

“We’re really proud that we own it, and I think the collaboration with the Historical Society is a really natural fit.”