Lansing fire captain fired for harassment — then allowed to retire 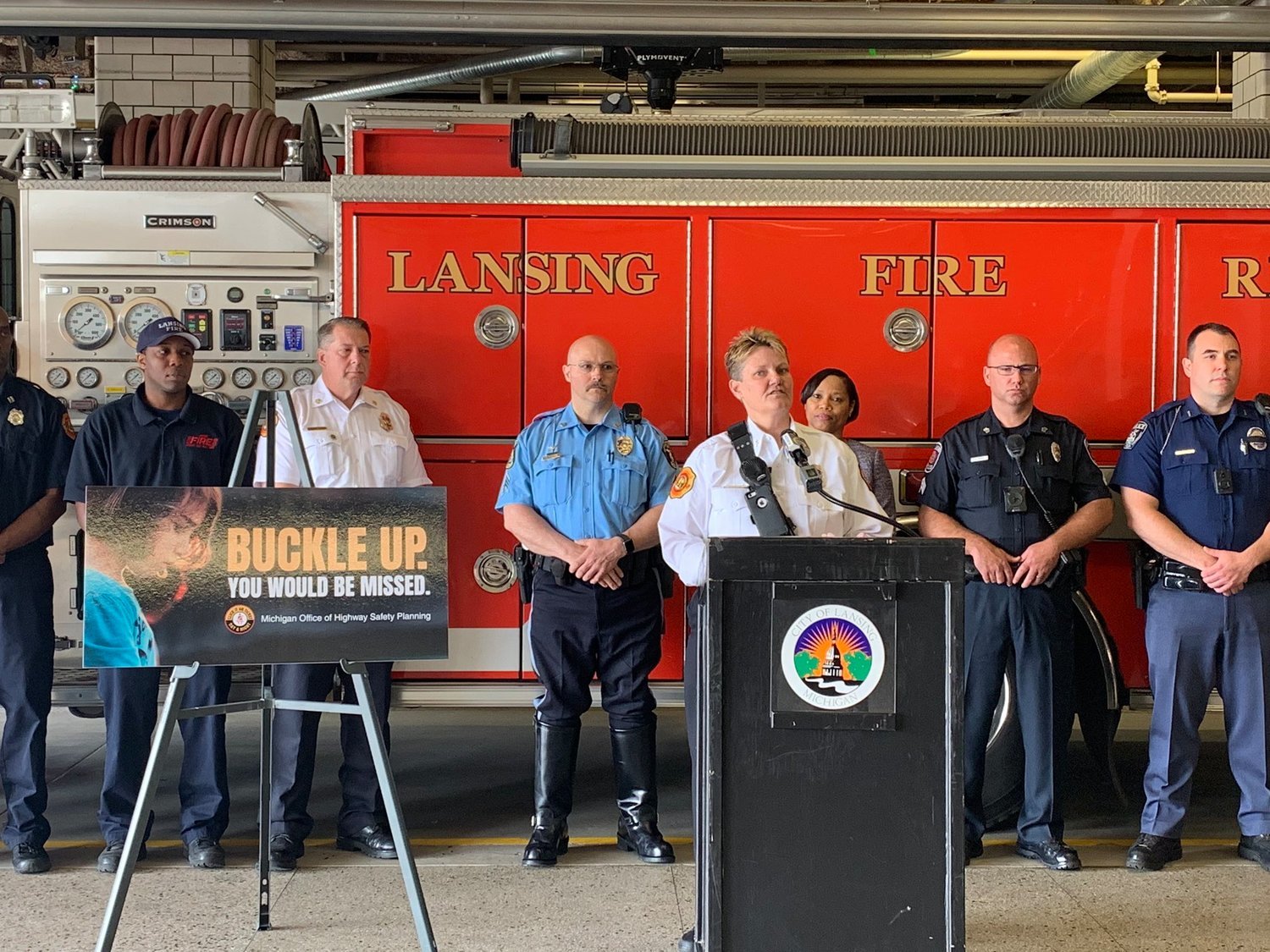 More than six months have passed since retired Lansing Fire Department Battalion Chief Shawn Deprez alleged to City Pulse that she had been sexually assaulted by a superior and subjected to unchecked homophobic and sexist harassment among her former colleagues.

And city records released this month help substantiate portions of her claims — including how former city officials failed to take action and allowed one of her alleged abusers to keep his job.

Deprez, 54, became the first woman in the Fire Department’s history to hold the rank of battalion chief in 2017, shattering a 160-year-old glass ceiling in the process. After more than 20 years working in Lansing, Deprez alleged last summer that widespread sexist and homophobic harassment — as well as a “middle-of-the-night” sexual assault at a fire station — had pushed her into an early retirement in 2019. Her claims were first published in City Pulse in July.

Afterward, Lansing Mayor Andy Schor promised responsive action and promptly committed to a “review” of those allegations. City Pulse also filed a public records request that sought to uncover all allegations made by Deprez, as well as records to show how they were handled.

City officials, in turn, billed City Pulse about $170. Delays followed delays. And all told, this writer spent about 200 days periodically pressuring Schor’s administration to step on the gas and fulfill the request. It finally arrived last week after Schor personally intervened— in the form of a nine-page document.

More than 600 pages of records, however, were withheld because city officials consider them to be “frank communications preliminary to a final agency or determination” — messages and notes between city officials that are best kept secret, according to the City Attorney’s Office.

And Schor is still keeping relatively tight-lipped about the accusations at the Fire Department.

“I reviewed several documents regarding that situation and had many conversations internally with human resources, our City Attorney’s Office and the fire chief,” Schor told City Pulse in a statement. “Because this is a personnel issue, I cannot comment on this individual case.”

Deprez told City Pulse last year that her old personnel file would be “thick” due to all of the complaints she filed — many of which were allegedly ignored or dismissed by the department’s top brass. She also alleged that she had been sexually assaulted by a superior at a fire station.

“I have the names. My personnel file will show all of the people who harassed me. More importantly, I was also sexually assaulted on the job,” Deprez said then.

She added: “It was a superior. It was in the middle of the night. Let’s just leave it at that.”

The records released last week by the city helped to substantiate portions of Deprez’ claims, but they also raised more questions — including over why a former captain could retire about four years ago after he was found by city officials to have sexually harassed and intimidated Deprez.

Among the nine pages released last week was a 2011 letter from former human resources director Terri Singleton that noted that former LFD Captain Jon Daniels was found to have verbally intimidated and embarrassed Deprez “on a daily basis” — even once ignoring her request for assistance at the scene of a fire. Those documents also showed that city officials had suspended and later fired Daniels that year for several policy violations, including breaking departmental rules on sexual harassment, discrimination and the handling of staff complaints.

The records provided to City Pulse did not include any reference to an alleged sexual assault.

Daniels, however, didn’t stay fired. City records showed that Daniels was allowed to return — even against the wishes of then-Fire Chief Tom Cochran — after he filed a union-related grievance and was offered a “last chance agreement” under former Mayor Virg Bernero’s administration, which brought him back as a low-ranking engineer ineligible for any promotions.

The only discipline that stuck: A mandatory training on sexual harassment and discrimination.

Daniels was able to retire in 2015. He still collects a gross yearly pension of about $61,000. Attempts to interview Daniels for this story were unsuccessful. He initially said that he would meet to talk on Friday evening, but then he backed out on Monday after he hired a lawyer.

“Since there is no lawsuit against the city, I am not willing to meet with you,” Daniels said. “I’ve been retired for six years now. I’ve moved on from her false allegations against me and quite frankly, this is not something that is worthwhile to me. I’ve moved on and this isn’t worth it.”

Cochran said last week that he wanted Daniels to be fired to “send a clear message” that harassment wouldn’t be tolerated at the Fire Department. After union officials got involved, however, Daniels was demoted and allowed to return to work, Cochran said.

“From what I remember, the administration and the union allowed Daniels to come back under a last-chance sort of agreement. He was busted down to the rank of engineer,” Cochran said. “It was really difficult to get anyone to step forward in that investigation, but it was my clear recommendation to fire Daniels — and I honestly don’t know what more I could’ve done.”

Cochran added: “I wanted to make a statement that this type of behavior wasn’t to be tolerated. His last-chance, return-to-work agreement wasn’t my decision. That was above my pay grade as chief. He was a good firefighter. He did his job well, but he obviously had some issues.”

Cochran remembered Deprez (then Shawn Meyers) complaining about Daniels’ alleged sexual harassment, but never any mention that she was sexually assaulted by anyone, he explained.

“There were rumors, but it was difficult to get anyone to step forward to tell me what had actually happened — including Ms. Meyers,” Cochran recalled. “I don’t recall anything about a sexual assault. If I had known that Ms. Meyers was sexually assaulted, I would’ve contacted police.”

In addition to the harassment, Deprez also alleged that top brass failed to acknowledge her “ongoing battle for men to be held accountable for their actions” despite “begging and pleading” for help from the city’s Human Resources Department. As a result, she said she spent $97,000 to buy out early retirement credits “because no one cared or did anything to stop the abuse.”

Cochran added: “If that is the case, I’d be shocked if the city didn’t do a formal investigation. Those are some serious charges and I would think the city would call in the Police Department, the Michigan State Police — some outside entity to come in and investigate that allegation.”

Cochran retired in 2012 and went on to become a state representative. And while he cautioned that he doesn’t necessarily remember all of the finer details, he insisted that he did “all he could” to hold staff accountable for allegations of sexual harassment and discrimination against Deprez.

“I wanted him fired. I recommended that he be fired,” he said. “The rest was out of my hands.”

Collective bargaining agreements with the firefighters union spell out a grievance process for any employee who disagrees with disciplinary action — including the potential for outside arbitration. Daniels’ return-to-work agreement was handled entirely in-house, city officials said.

Calls to the International Association of Firefighters Local No. 421 were not returned. Bernero, who was in his second term as mayor at the time, said he had “no recollection” of the issue.

Deprez said she took a job at LFD in 1995 and was sexually assaulted as a newbie firefighter. She told City Pulse in July that she had contemplated filing a lawsuit against the city over the alleged abuse, but noted that she only spoke up last year to bring about “internal change.”

“I can also name former chiefs and others who have gone on to become politicians,” Deprez said. “We’re talking about high-ranking members of Local 421 and the MSU firefighters’ union. These people don’t want me talking about this. They should all have reasons to be fearful.”

Deprez added: “I was abused and harassed for being a lesbian female. Until my final day, I was treated poorly by men at the Lansing Fire Department. I was even harassed by other females, and not one person was brave enough to take a stand and hold themselves responsible for the hate they allowed to happen that damn near destroyed me. I’ve begged and pleaded for help from HR and many of Lansing’s fire chiefs, and no one stopped the harassment of lesbians.”

Her claims were also corroborated by other former female Fire Department employees.

In part because of the harassment, Deprez said she checked herself into a hospital and was diagnosed with post-traumatic stress disorder. She said speaking out last year was part of that healing process, though she also added: “I still suffer everyday. LFD literally broke me.”

“People need to know that it’s not a safe place to be,” Deprez said. “I think right now, the only thing I’m looking for is to shed some light on the blatant harassment that was allowed to take place. The Lansing Fire Department has truly been out of control for many, many years.”

Deprez told City Pulse that she planned to reveal more details about her allegations after she hired an attorney. No lawsuits have been filed. Deprez also hasn’t returned subsequent calls.

Her allegations of discrimination, however, are also far from the first to be levied against the Fire Department. Several current and former Black staffers are still pushing forward this year with lawsuits against Schor and the city that allege discrimination and race-based retaliation.

Schor has also since recognized and apologized for alleged racism at the Fire Department in an audio from 2019 that was leaked to City Pulse: “If I said that there are no racial issues within the Fire Department, it may have been something that I said earlier on because there are. I know there are. I’ve had folks talk to me. There definitely are. I know there have been in the past.”

Though Schor wouldn’t comment on Deprez’ claims, he added: “I will not tolerate discrimination or sexual harassment. Every allegation will be taken seriously and investigated thoroughly, and we will take action when there is evidence of wrongdoing. We have acted several times while I have been mayor with everything from discipline to termination, and that practice will continue.”

Schor couldn’t cite any policy changes that would prevent the same scenario from repeating itself at the Fire Department, though he insisted he has “zero tolerance” for sexual harassment.

Fire departments nationwide have long struggled to attract minority applicants. According to the U.S. Census Bureau, more than 95% of all firefighters are men and 85% of them are white. In Lansing, that makeup is 94% men, 70% white, according to records provided by Schor’s office.

Withholding records about alleged misconduct of its first responders is a familiar ball game for Schor’s administration. It’s the same legal tactic that was used in 2020 when the city flatly refused to release hundreds of records on internal investigations of alleged police misconduct.

Like then, City Pulse plans to file an appeal with the City Council for additional documentation. Newly selected Council President Adam Hussain will then decide whether they’re released.