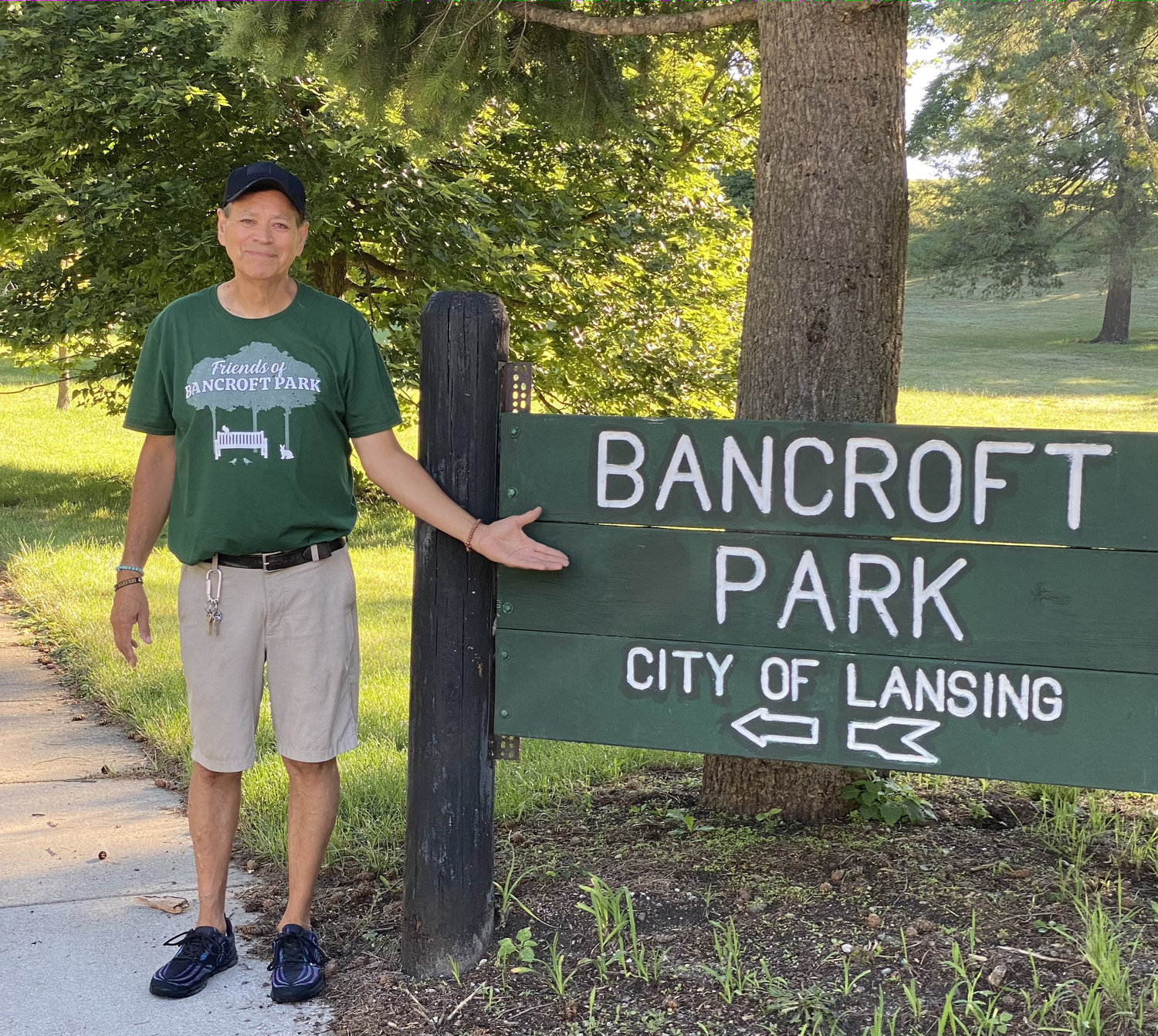 Glenn Lopez is the president of the Friends of Bancroft Park, which is next to Groesbeck Golf Course. “We don’t want a driving range,” he says.
Berl Schwartz, City Pulse 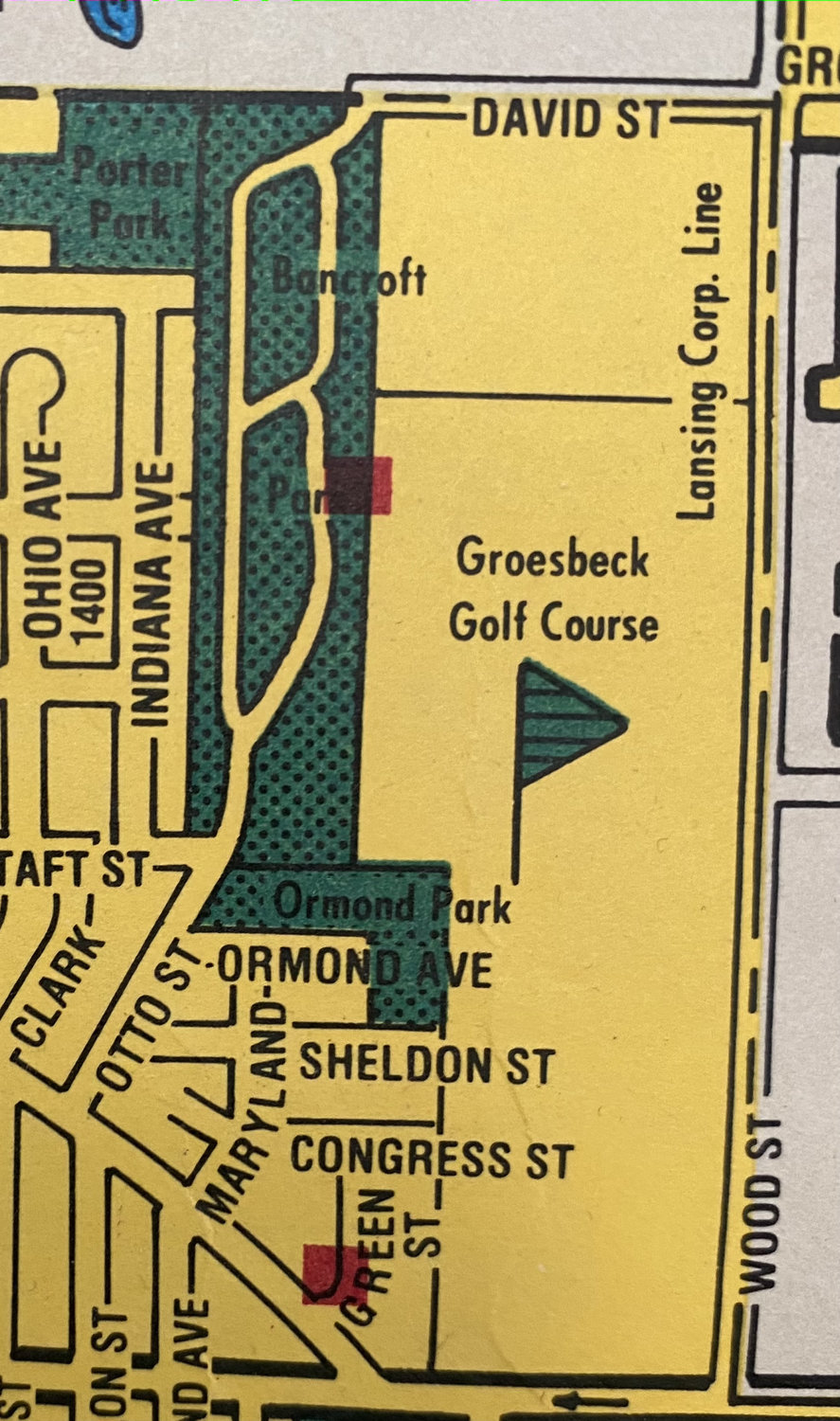 An older map of Greater Lansing shows Bancroft Park, on Lansing’s north side, whose entrance is from Otto Street off of Cesar Chavez Avenue. Adjacent Ormond Park is smaller now because of a new entrance on the southern end of Groesbeck Golf Course.
Posted Thursday, August 18, 2022 12:00 am

A 1920 clipping of the Lansing State Journal, unearthed by local history buff Tim Bowman, reported that the Lansing Park and Cemetery Commission had named the park in honor of Mrs. May M. Bancroft, who had sold the land to the city, and her son, H. Lee Bancroft, the city’s first parks and forestry superintendent. When he was appointed in 1913, Lansing had just two parks totaling 50 acres. When he retired 43 years later, it had grown to 1,500 acres, including Groesbeck Golf Course. ”
Berl Schwartz and Todd Heywood

Bancroft Park, in north Lansing, is 41.77 mostly wooded acres of mature oak, maple and basswood trees. It is part of the Mason Esker, which, as a sign in the park explains, is a “linear, winding ridge formed of sediments deposited in the bed of a stream that flowed upon, within, or underneath a glacier.” That stream stretched almost to Mason. Glaciers came and went, with the last one believed to have melted 15,000 years ago, leaving behind deposits of sediments at various places along the stream’s route. “Bancroft Park is one of the few remaining segments of the esker,” the sign says.

A 1920 clipping of the Lansing State Journal, unearthed by local history buff Tim Bowman, reported that the Lansing Park and Cemetery Commission had named the park in honor of Mrs. May M. Bancroft, who had sold the land to the city, and her son, H. Lee Bancroft, the city’s first parks and forestry superintendent. When he was appointed in 1913, Lansing had just two parks totaling 50 acres. When he retired 43 years later, it had grown to 1,500 acres, including Groesbeck Golf Course.

Bancroft Park features a paved loop for walking, jogging and cycling. Counting the walk around the adjacent Groesbeck Drain Park just north of Bancroft Park, the path is 1.4 miles.

Along the way, visitors will see among and between the trees some backyards in the working-class neighborhood on the park’s west side, an occasional bench, ponds, a playground, a basketball court, a few barbeque grills, two wooden observation decks, ducks and geese, now and then a deer and, more rarely, a fox, and, along the east side of the path beyond a chain-link fence, the greens and fairways of Groesbeck Golf Course.

What you do not see in Bancroft Park are many people at any hour.

It wasn’t always so. Glenn Lopez remembers in his youth when Bancroft Park was bustling with baseball, tobogganing and, most of all, ice skating. You can still make out what appears to have once been a baseball diamond at one end of several acres of grass in the park’s largest open area. Two bare soccer goals stand in the field.

“That was the warming center,” Lopez, 69, said, pointing to a small brick building. “That’s where I got hot chocolate.”

Lopez is president of the Friends of Bancroft Park. He wants the bustle back. He calls the park a “hidden gem.” He’d love to see more activity there, he said.

But he’s worried that the gem is going to be tarnished by the installation of a “limited flight driving range.” That’s how an idea for the park was described in the minutes of the April board meeting of the Lansing Entertainment & Public Facilities Authority, which operates Groesbeck Golf Course.

Scott Keith, who heads LEPFA, steers clear of calling it a driving range. It’s “someplace to practice and warm up” before playing a round at Groesbeck.

Keith has his eye on the clearing where Lopez played ball and skated. It’s where the road into the park from Otto Street ends in a paved lot with 14 parking spots and where the looping walking trail through the park begins.

“It’s extremely early on,” said Keith about the concept. He’s hoping to sign a contract soon with a local consultant, Allen Belyea, a grad of Everett High School and Michigan State University who works for Albanese & Lutzke, an international golf course design firm. Scott said Belyea grew up in the Groesbeck area and has played at the golf course many times. He estimated the consultation fee at $25,000 and said it would be spread out over two years, an indication that no decision on a driving range is imminent. Belyea’s marching orders will be to look for a “practice area in close proximity” to Groesbeck where golfers can warm up, Scott said, but “It can’t be too far away,” lest golfers cool off.

Bancroft Park fits the proximity bill to a tee. The site Keith is eyeing is just a good smack with a driver from the golf course.

A practice area was the No. 1 desire Groesbeck golfers expressed when LEPFA asked them what would make the course more appealing. LEPFA asked because it is looking for ways to generate more revenue, which a limited driving range could do.

Under LEPFA, which took over management of Groesbeck from the Parks Department five years ago, the city subsidy for Lansing’s only golf course has dropped dramatically from $400,000 to $500,000 a year to $100,000, Keith said.

Being a relatively COVID proof activity, golf at Groesbeck peaked during the pandemic and has been leveling off as the virus has waned, Keith pointed out. Thus, LEPFA has been strategizing ways to continue reducing the subsidy. One idea is the limited driving range.

Bancroft Park is an obvious choice. Besides being close, it has electricity to power golf-ball vending machines and it has restrooms on the side of the same building where Lopez drank hot chocolate. To protect trail users, Keith said golfers would be required to use so-called limited distance balls. Netting would also be necessary, he added. But he does not foresee much more change, such as lights or a path from the golf course to the driving range.

Keith is well aware the group, whose Facebook page says it has 346 members, is dead set against a driving range of any sort. If indeed the consultant recommends putting the range in the park, then Keith is hoping to convince them doing so would be a “win-win.”

“This could be a positive thing for the park and the golf course and the youth,” he said. “There’s a lack of opportunity for youth to get engaged in golf.” Indeed, Lansing’s public high schools don’t have golf teams. “Practice is a great way to get kids involved. You just hit the ball and not worry about a score or all the etiquette” that shooting a round of golf entails. It’s a relatively expensive sport because of the cost of clubs, but Keith said the city Parks and Recreation Department could seek grants to help pay for equipment for youth.

Keith stressed that “everybody’s got similar goals” when it comes to the park, and indeed Lopez emphasized that his goal is to bring kids back to the park. But he wants it to be through recreational programs. “We have it in other parts of the city,” he said, recalling again the year-round programs the Parks Department once provided in Bancroft Park. “Why can’t we get it back right here?”

Parks Director Brett Kaschinske said he is willing to discuss ways to bring recreational opportunities to Bancroft Park. He knows and highly respects Lopez, a retired classroom paraprofessional in the Lansing School District, who has worked in parks and rec youth programs for decades. Kaschinske professes neutrality on the issue of a driving range. He wants to see the consultant’s study before he offers an opinion.

Like Lopez, Brian Daniels, the Lansing City Councilmember whose ward includes the park would like to see more park activities. “Let’s come up with a list of things we want to do at the park,” Daniels said, “and bring it to Brett and make sure the space is used.”

But such a list would not include a driving range, Daniels said, despite reports to the contrary on where he stands. In April, Keith told LEPFA’s board that Daniels was “supportive” of a driving range. Daniels said Keith took what he said out of context. “He said he wants to put in a driving range near Groesbeck. I said that’s great. I want to hear more about it.”

Daniels said he won’t support it in Bancroft Park “in any way.”

“People have made it very clear” they don’t want it, “and I’m a representative of the people.”

Daniels, who was appointed to the Council this year to fill a vacancy, then criticized his opponent for the 1st Ward seat in the Nov. 8 general election, Ryan Kost, whom he said “has continued” to say that Daniels supports a driving range.

Kost, who serves on the board of Friends of Bancroft Park, said he is “not sure why Daniels is slinging mud. I don’t think I’ve ever said he supports it, but I repeated what’s on the Friends page,” which is that Daniels supports the idea according to Keith.

Kost said he’s “absolutely against” the range idea in the park. “I can’t see any way this would benefit the citizens when you can go any day and see people walking their dogs or with kids or jogging.”

He also criticized Keith. “I’ve talked to Scott Keith. He’s not very interested in working with the Friends group.”

Keith has not yet met with the Friends group. He said he wants to wait till he has some “meat” — something concrete to tell them based on the consultant’s study.

Ultimately, if LEPFA does settle on Bancroft Park as the best location, the issue will land in Mayor Andy Schor’s lap. Schor is aware of the issue.

“I want to hear the opinions of the neighbors in the area and the feasibility of even doing something like this,” he said by text message Friday. “Bancroft is a big park and could offer many amenities for the community, but I don’t want to lose any of the benefits for the neighbors, so I want to see any feasibility study and hear the opinions of those that live in the area and use the park.”

Schor is well familiar with what a fight over a park can be like. One of the last acts by his predecessor, Virg Bernero, was to put an entrance to the golf course through 8.2-acre Ormond Park off what was then Grand River Avenue, since renamed Cesar Chavez Avenue. Bernero said it was part of a plan to make the course profitable by making it more accessible. Ormand Park denizens sued.

Schor inherited the suit when he took office in 2018. He kept a campaign promise to install new playground equipment in what was left of the park. Under Schor, the city settled the suit for $10,000, but the fight left some residents bitter. “The park was destroyed,” Peter Wood, who helped lead the fight, told the Journal in 2019.  “The whole character of the park was destroyed.”

Clearly, from his statement, Schor wants to avoid embittering Bancroft Park area residents. Bancroft Park is five times bigger, and the driving range idea is not comparable to gutting a park for a paved road. But it would change the park experience to some extent for those who enjoy it for its serenity in a setting that after all dates back to the last Ice Age.

“We have a history of piecemealing stuff,” he said. “If we make it a range, what’s next?”