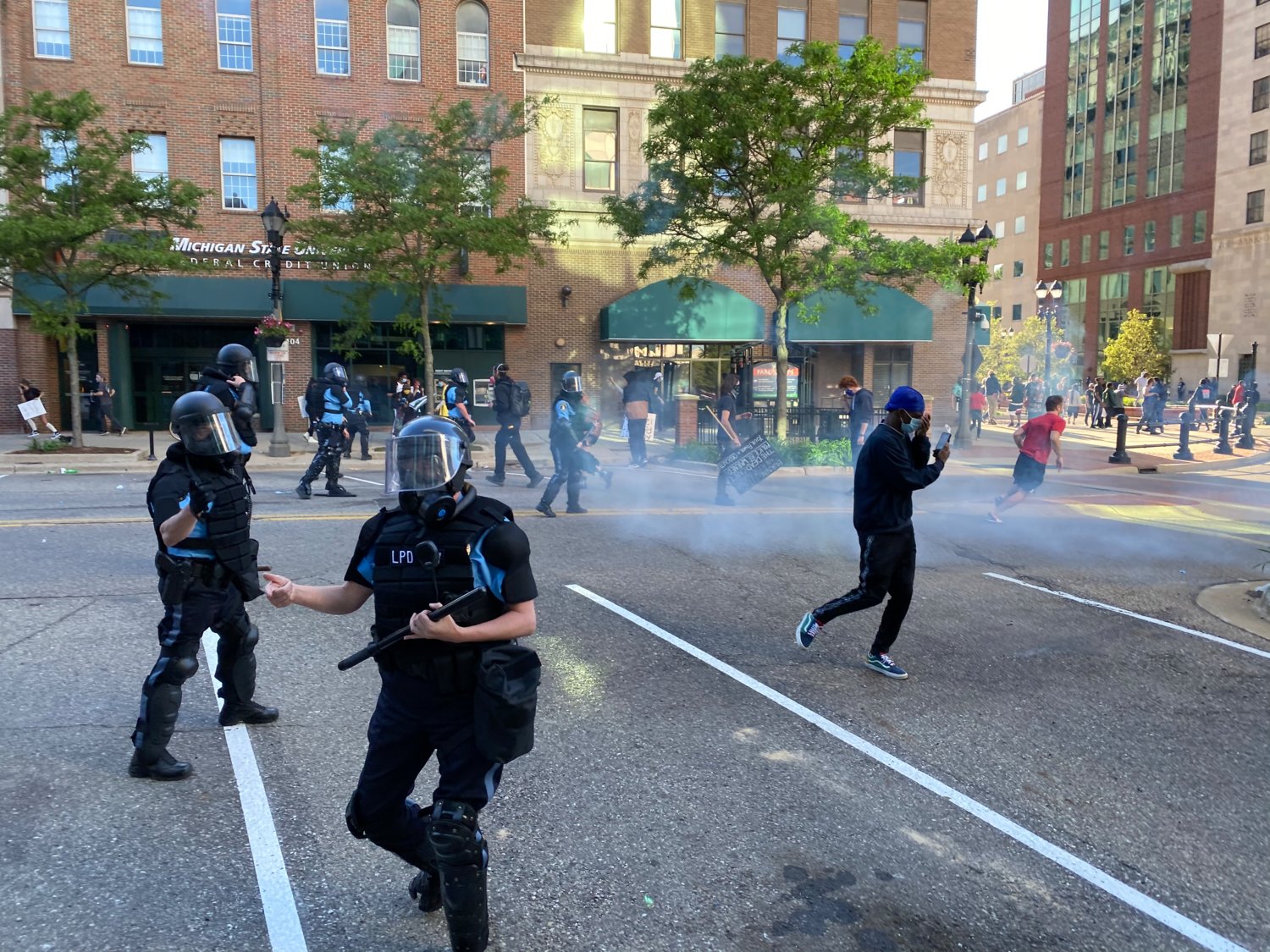 This story was updated to accurately reflect that the Lansing Police Department and at least one other unnamed police agency — but not the Michigan State Police — had deployed tear gas on Sunday. It has also been updated to remove an attribution to a police spokesperson.

THURSDAY, June 4 — There seems to be some dispute surrounding what irritating gas was lobbed toward protesters Sunday night in Lansing.

Was it actually tear gas? Or was it — as Lansing Mayor Andy Schor prefers to call it — pepper spray? The Lansing Police Department uses the term “chemical agents.” But a spokesman for the department has set the record straight: Tear gas is just another common word for chemical agents. It's all semantics.

LPD warned and released a chemical agent which was a ‘CS’ gas, said LPD spokesman Bob Merritt. “Keep in mind, all types of chemical agents are commonly called tear gas. Each affects a person’s eyes. It’s common for agencies to state ‘chemical agents’ when referring to tear gas.”

Multiple police agencies, including the Lansing Police Department, deployed chemical agents on Sunday, Merritt said. LPD tossed chlorobenzylidene malonitrile, a powder that chemically forms with a solvent into a gas to irritate mucous membranes in the eyes, nose, mouth and lungs.

OC spray, another other type of crowd control that police have weaponized, uses oleoresin capsicum — oil taken from the placenta near the stem of the pepper that typically comes in a spray. LPD did not use any pepper-based products. Both are still commonly labeled as tear gas.

And while the chemical compound changes, the effects are exactly the same: burning, watery eyes, difficulty breathing, chest pain, excessive saliva and skin irritation — an effective tactic for clearing out a city block after a car was flipped and burned on Washington Square.

Schor, in an interview with City Pulse after the demonstration, said he prefers using the term “pepper spray” to refer to the LPD’s CS gas, claiming there was a technical difference to that and tear gas. President Donald Trump has also demanded media outlets stop using “tear gas.”

Cops (and apparently mayors) shy away from calling their crowd-dispersing chemical tools “tear gas” because it can evoke images of police gassing citizens or war zones. But giving those weapons antiseptic names does not change reality on the ground, the Associated Press reports.

Federal institutions — like the Centers for Disease Control and Prevention — list tear gas as the common term for riot-control agents, regardless of whether it’s actually labeled CS or OC gas. Whether the common or formal term is used, the effects on people are the same, AP reports.

There’s also still some dispute over whether LPD officers actually warned those protesting police brutality on Sunday in the wake of George Floyd’s killing that tear gas (by any name) would be used. Our reporters didn’t hear them, and neither did dozens more who have recounted the recent demonstrations on social media.

Calls have since been made to defund the Police Department and for Schor to resign over the perceived heavy-handedness on Sunday, as well as Schor’s alleged failure to connect with the local black community on important issues like racial equity and discriminatory police tactics.