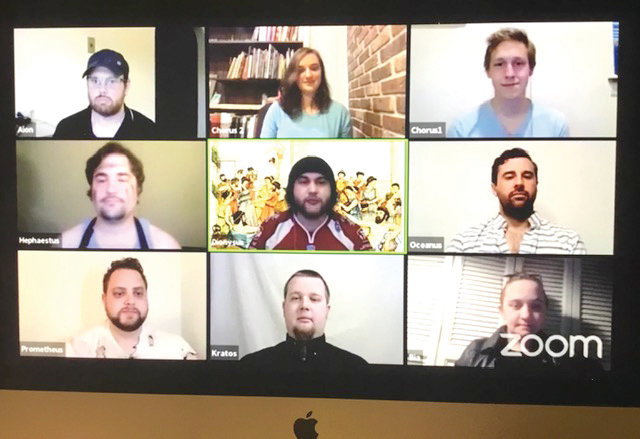 If the Curtainless Theatre was a musical group, it wouldn’t play simple pop or three-chord rock ‘n’ roll. The theatrical company would surely perform only abstract jazz or classical symphonies. I admire that it doesn’t take an easy path.

The troupe that moved from East Lansing’s Hannah Center, to Lansing’s Sycamore Creek Church, and now to online shows, is known for performing only complicated Shakespeare tragedies. For an indefinite time, the Curtainless Theatre is providing a virtual reading of  “Prometheus Bound,” by Aeschylus — the possible creator of tragedies.

The Greek classic is easily available on the Curtainless Theatre’s Facebook page.  A link on the site allows for PayPal donations.

A Shakespeare script from the late 1500s and early 1600s or translated Greek dialogue from 430 B.C. isn’t meant for modern audiences with short attention spans or a disdain for highbrow, outdated discourse. And the appeal of “Prometheus Bound” can be even harder to appreciate when viewed with the limitations of Zoom.

Like Prometheus’ stubbornness to defy Zeus, the Curtainless Theatre bravely recorded a cast of seven courageous actors reading part of the multilayered play. Without auditions, director Dale Wayne Williams chose trusted actors he worked with before.  They rehearsed three times before their live broadcast on May 8.

A mighty Kameron Going shoulders the role of Prometheus and much of the focus in the tragedy about power, freedom of thought and the importance of pity. Wearing a tattered shirt symbolizing being doomed to be chained to a rock by Zeus, Going gives a heroic reading.

The rest of the cast read principal roles and contribute the voice of the obligatory Greek chorus known as the “Oceanids.”

Robert Mueller is an expressive Hermes who brazenly serves Zeus. Ellie Weise as “Io,” offers dramatic and persuasive speech as a god who struggles with her own sufferings.

All actors — including Tim Edinger, Chris Didur, Monica Holland, and Joe Clark — offer clear enunciation, smooth deliveries of antiquated text and the ability to interact with others while separated. A memorable scene is when Weise manages all that while also reacting to stinging insects sent by Zeus.

Balance issues, visual inconsistencies and uneven settings are expected when trying out a new medium. Williams’ brief narration interruptions with loud music or sound effects are especially awkward. Anyone who has used Zoom can appreciate how difficult it can be to have a perfect chat. To create a flawless, multiple reading of Greek Antiquity Theater lasting about 70 minutes is a daunting task.

I remember how daunting it was to read “Prometheus Bound” in high school.  It was easier being able to listen to the script in the comfort of my home. And this time, I didn’t have to fear a test at the end of the story.

Check it out at: facebook.com/curtainlesstheatrelansing