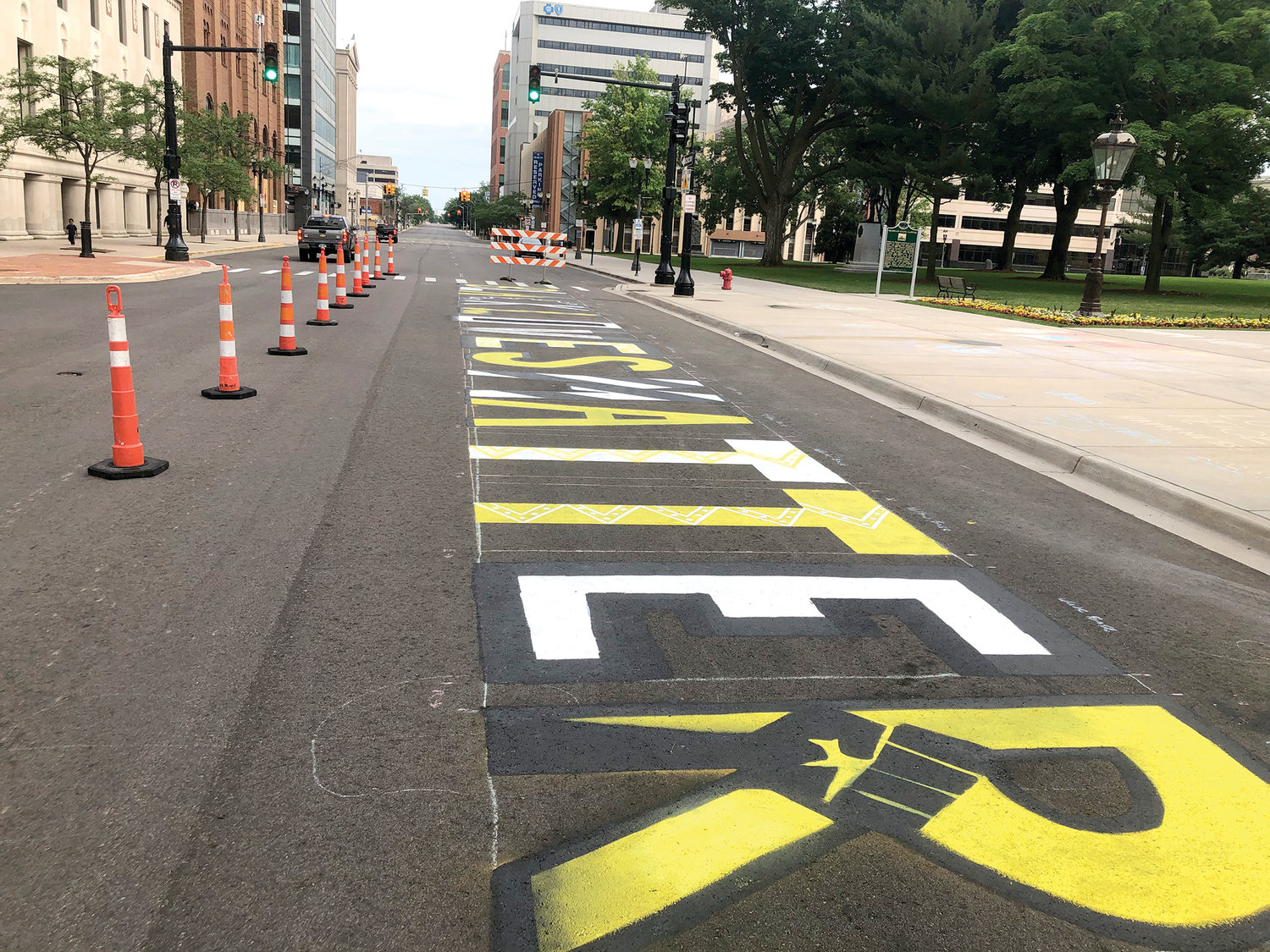 A BLACK LIVES MATTER mural in front of the Capitol.
Cole Tunningley
Posted Tuesday, May 3, 2022 10:18 am
Kyle Kaminski

TUESDAY, May 3 — The Lansing chapter of Black Lives Matter is expected to gather at the Ingham County Jail in Mason at 3 p.m. today to demand the immediate release of the man who was shot and injured last week by two East Lansing Police Department officers near the Meijer on Lake Lansing Road.

A press release distributed last night by BLM identified the man as DeAnthony VanAtten. Individuals saying they were family members also identified him as such at a meeting of the East Lansing Independent Police Oversight Commission last week. Authorities so far have declined to identify the man shot in East Lansing last Monday as a Michigan State Police investigation continues, other than to say he  was 20 and from  Lansing and  that he was released from a hospital yesterday and lodged at the jail on an unrelated warrant for a probation violation.

“Black Lives Matter Lansing will join the family in solidarity to announce our demands,” according to the press release. Among them: 1.) Release VanAtten; 2.) Release the names of the officers; 3.) Release unedited video footage and 911 call; 4.) Fire cops; 5.) Prosecute cops.

A caller reportedly told police that at about 6:30 p.m.  April 25 that a man had pocketed a gun from inside his car and entered the store. After being chased out by police, the officers “encountered the subject and shots were fired,” according to authorities.

The man was reportedly hospitalized in “stable” condition after the shooting. BLM officials labeled his continued detainment following the shooting last week as a ‘kidnapping’ and also alleged that Sparrow Hospital staff had prohibited him from contacting his family.

Several agencies crowded the parking lot into the night. Both cops had less than three years of experience on the job, have not been named and remain on paid leave amid an investigation.

The  press release from BLM contends the man was unarmed and “running away” from those police officers when he was shot. Authorities haven’t yet released their own official narrative.

“Shopping while Black is not a crime. A false report was called in and ended with a young Black man being shackled to a bed at Sparrow Hospital with 2 bullets still in his body. Running from the police because you are in fear is not a crime, nor is it legal to shoot civilians like an animal,” according to the BLM press release that announced the upcoming “press conference” at the jail.

The release repeats unverified witness reports that the two cops “shot a total of 11 rounds in a parking lot full of people instead of going on a foot chase.” The East Lansing Independent Police Oversight Commission voted last week to request video footage be released by Thursday.

Police Chief Kim Johnson has told reporters that he is unable to discuss all the details — including the officers’ names — while the probe continues. The incident reportedly marks the first time East Lansing cops have shot someone in the department’s 100-plus-year history and is “one of the biggest challenges that we’ve ever faced,” Johnson told local news outlets last week.

Officials at BLM are also leaning on the recent incident to renew calls to “defund the police.”

“No life is safe from an institution that began as a slave patrol and now operates as a militarized force that is above the law,” the press release reads. “We demand answers and we demand the officers be held accountable. Cops shooting Black people are not isolated incidents.”