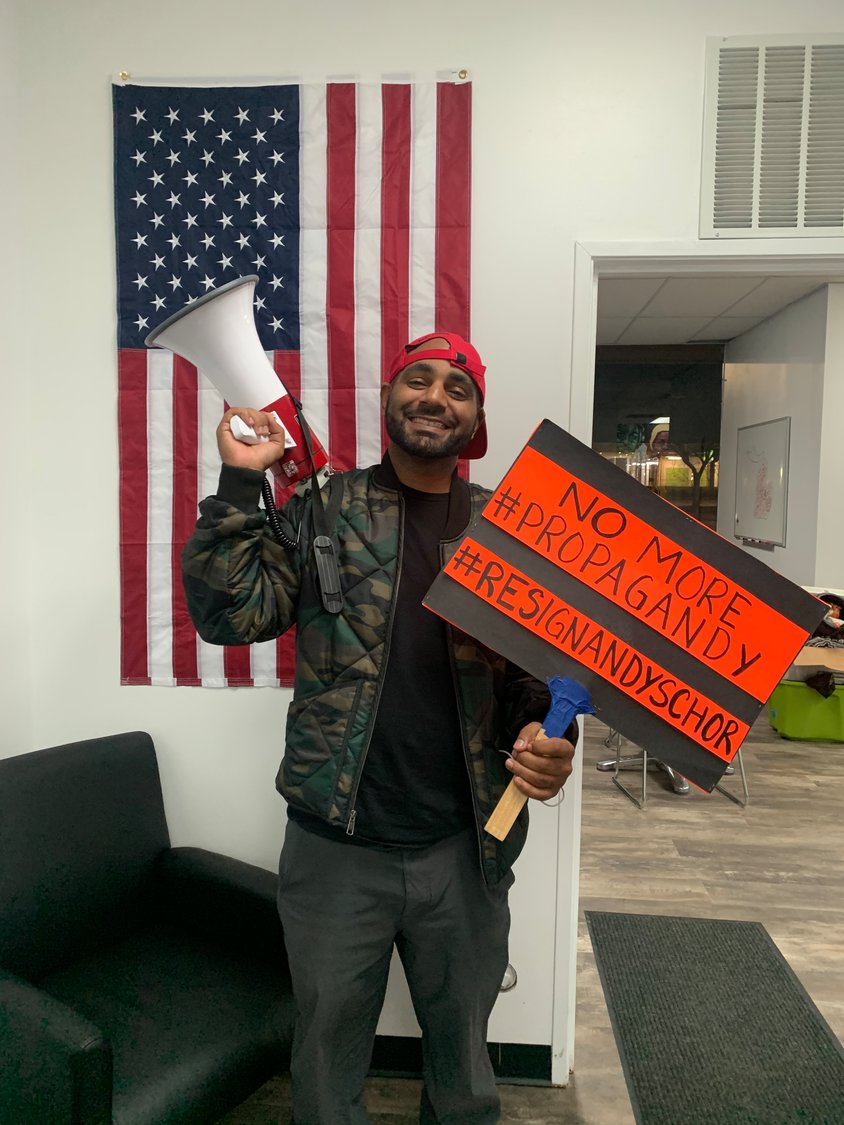 (This story was updated to include additional information at 6:31 p.m.)

WEDNESDAY, Feb. 17 — The co-leader of the Lansing chapter of the Black Lives Matter movement was fired this week from the Lansing Fire Department after he shared Lansing Police Chief Daryl Green’s cell phone number with thousands of people on Facebook.

Lansing firefighter and activist Michael Lynn Jr. last month urged his social media followers to call Green on his city-issued cell phone and “let him know how we feel” about a controversial Facebook post from LPD that paid respects to a police dog that was killed in action in 1999.

That since-deleted Facebook post from LPD offered high honors for the dog but repeatedly referred to Aldric “AJ” McKinstry Jr. — who shot and killed the dog before officers shot him 18 times — as “the subject.” Lynn was close friends with McKinstry and refers to him as his brother.

As a result of the disclosure, city officials said Green was inundated with calls and was forced to change his number “at a time emotions were running high” in the city. Changing numbers also “compromised the operational efficiency of the Lansing Police Department,” officials alleged.

Lynn said he was accused of violating multiple Fire Department policies at a subsequent “kangaroo-court-style” disciplinary hearing last week. And today, it led to his firing.

"This was a malicious use of information gained that is directly related to his position as a City of Lansing employee,” it reads. “I view his intentional actions as harassing and meant to harm me, my family, and the City of Lansing. Lynn has used his speech in a way to endanger others in the community and further obstruct the police department in its public safety and reform efforts.”

Lynn said he only shared Green’s number in an effort to have the department’s Facebook post removed and to “stop the harm” it was doing to the community. And Lynn got what he wanted. Green — in consultation with Mayor Andy Schor — had the post removed a few days later.

Lynn also said Green gave him the number with no conditions about whether it could be shared.

"This is pure retaliation,” Lynn said in a statement. “They cite in my termination letter that I am the driving force behind the community being upset with the Lansing Police Department, and that is simply not true. We are lucky to live in a community that is well-informed and holds its government responsible for its shortcomings, and the City's attempt to blame me for the community's dissatisfaction with its repeated failures is an insult to the citizens of Lansing.”

Lynn — who is also suing the city for racial discrimination — said today’s decision to terminate his employment ultimately has “little effect” on his day-to-day life. He said he hasn’t worked there in any formal capacity for nearly a year and has been on unpaid sick leave tied to a disputed case of post -traumatic stress disorder since last May.

Human Resources Director Linda Sanchez-Gazella had also denied Lynn’s request — which cited the Americans with Disabilities Act — to attend last week’s disciplinary hearing virtually. In emails, she insisted he attend in-person or submit evidence in his defense in writing by Monday.

Lynn told officials that he was out of town traveling for health reasons, as prescribed by his doctor. Sanchez-Gazella emphasized that Lynn’s “alleged” and “disputed” medical condition wasn’t enough to outweigh the need for “confidentiality” during the disciplinary proceedings.

“This administration's unwillingness to hold themselves accountable is reprehensible,” Lynn added. “This is the outcome they have been searching for since I started my employment with the City of Lansing, but I will not stop my fight to hold them accountable to our community."

Lynn has also insisted that Green’s work-issued cell-phone number was “public information” even though it is not publicly listed on the city’s website. Local news outlets and members of the public have been asked to first interact with a public information officer in order to contact Green. City Pulse has also never been given direct access to Green’s city-issued cell phone.

Lynn further argued that every conversation he has had with Green has been “on a personal level” — not tied to his employment with the city. Screenshots shared with City Pulse showed the two frequently discussed city-related issues, mostly in Lynn’s role as a community activist.

Green was also a guest on a segment of Lynn’s online talkshow, “Merica 20 to Life.”

“You can help me change policies and certainly I can do that if I have the public driving me to make those changes. I can say ‘Hey. This is what the community wants.’ And we can move forward,” Green told Lynn when he appeared on the show last year. “Participation is important.”

Lynn said he expects the decision to fire him today will lead to more litigation against the city.