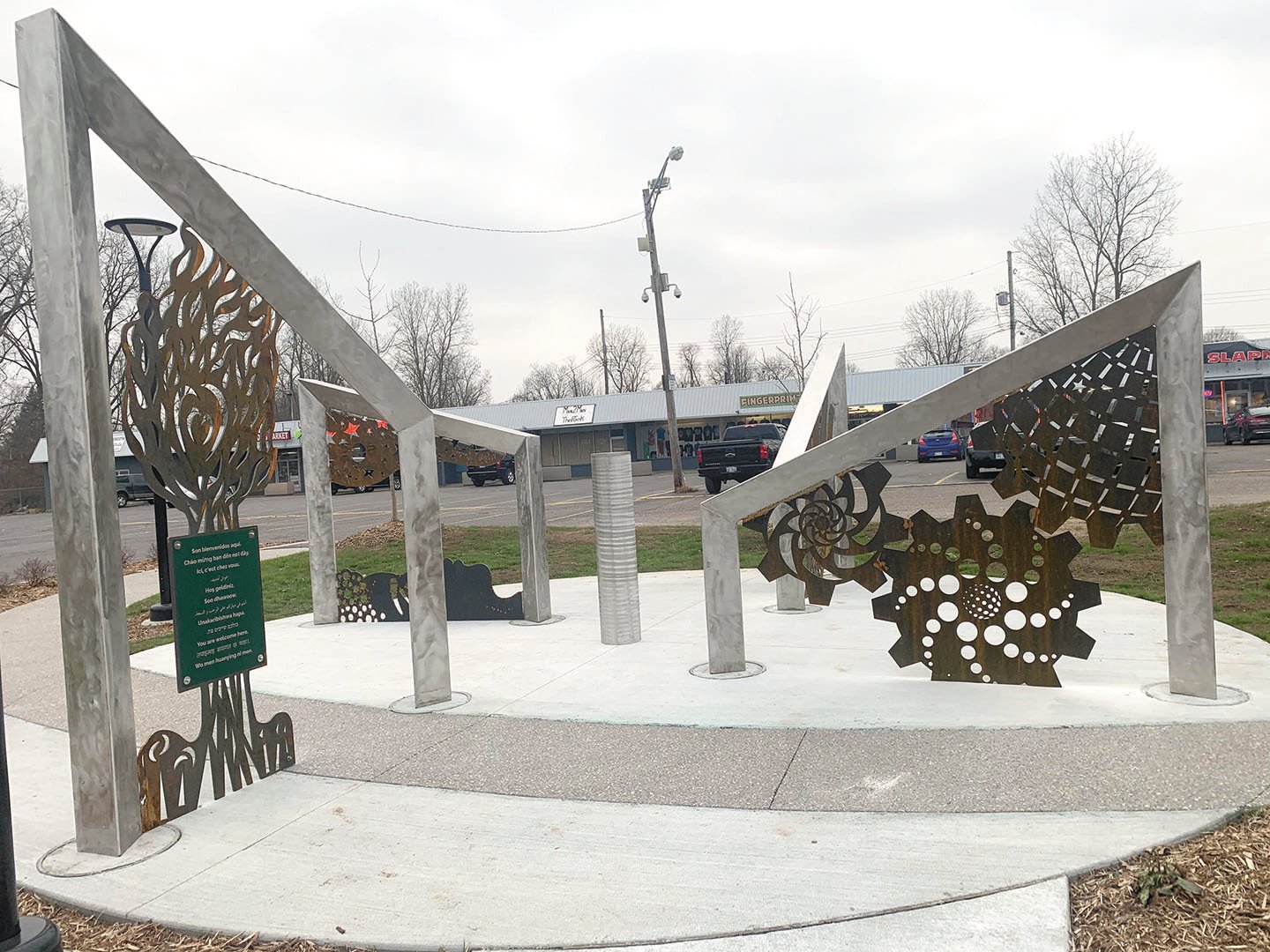 Encompass Lansing, designed by David Such and Fred Hammond, is installed on the corner of Pleasant Grove and Holmes roads.
Kyle Kaminski/City Pulse
Posted Thursday, December 10, 2020 10:06 am
SKYLER ASHLEY

Beginning life in 2017 as a proposal by At-Large City Councilwoman Kathie Dunbar that received a $75,000 grant by the Lansing Economic Area Partnership and the Arts Council of Greater Lansing, the Southwest Lansing Arts Impact Project is finally coming to life.

Located at the corner of Pleasant Grove and Holmes roads, the centerpiece of the project, which also includes space for a town square, is a sculpture designed and built by Lansing artists David Such and Fred Hammond. The sculpture, named “Encompass Lansing,” consists of four panels that form a compass shape. Each individual panel is adorned with unique visual elements that represent different aspects of the Southwest Lansing community. Discussions between Such and Hammond with local community members formulated the design. One panel features the phrase “You Are Welcome Here,” written in 12 different languages to celebrate the diversity of the area’s population, while another panel adorned with gears represents Southwest Lansing’s industrious spirit and work ethic. The other two panels include a hand to visualize families and a person gazing at the sky to represent the hopes of the city.

“I listened to what they thought about their neighborhood and what the art should represent,” Such said. “Based on what they told me, I made some preliminary drawings and we came together again at a second meeting and I was given the go-ahead.”

Such and Hammond have been friends for many years and have collaborated on numerous projects. Such’s expertise saw him handling the design, while Hammond managed the technical aspects and the engineering. Alro Steel cut the metal used in the sculpture, and it was assembled over the course of three months in Hammond’s shop in Old Town.

“Between David’s creative skills and my technical skills, we make a perfect match and work together really well,” Hammond said. “It was a lot of hard labor. We left at the end of the day sweating.”

But there was an immense amount of community groundwork that went into the formation of the placemaking project beyond just the initial grant from LEAP and the Arts Council. To actually install the sculpture and begin work on the town square, the property at the corner of Pleasant Grove and Holmes Road had to be purchased. The particular location was chosen because it’s the geographic center of the southwestern Lansing region. Much of the fundraising effort was pulled off by South West Action Group, a local nonprofit formed by Southwest Lansing community members.

“We recognized that in order to have the greatest impact in southwestern Lansing, we had to organize as a group and become a nonprofit organization,” said Rachelle White, president of the Southwest Action Group. “We realized that the property to be used, where it would have the greatest impact, would be unused parking space that was deteriorating.”

The nonprofit pulled together enough donations from the local community to purchase the space where the sculpture and town square were ultimately installed.

City Councilman Adam Hussain said another vital component in the long process of ultimately bringing the project to fruition goes back to the Southwest Lansing Initiative in 2016. The initiative, which was backed by a $50,000 grant from the Michigan Economic Development Corp., resulted in an economic action plan that identified placemaking and public art as imperative to creating progress in the future development of Southwest Lansing. Public art projects like “Encompass Lansing” are important for building pride within a community, Hussain said.

“We knew that we wanted public art. Folks were supportive of that effort,” Hussain said. “We brought hundreds of people together to talk about who we are as a people in South Lansing. Those efforts in 2016 and 2017 are where it all began. Now, people can point to the installation itself and say, ‘I took part in that; I helped planned that.’”