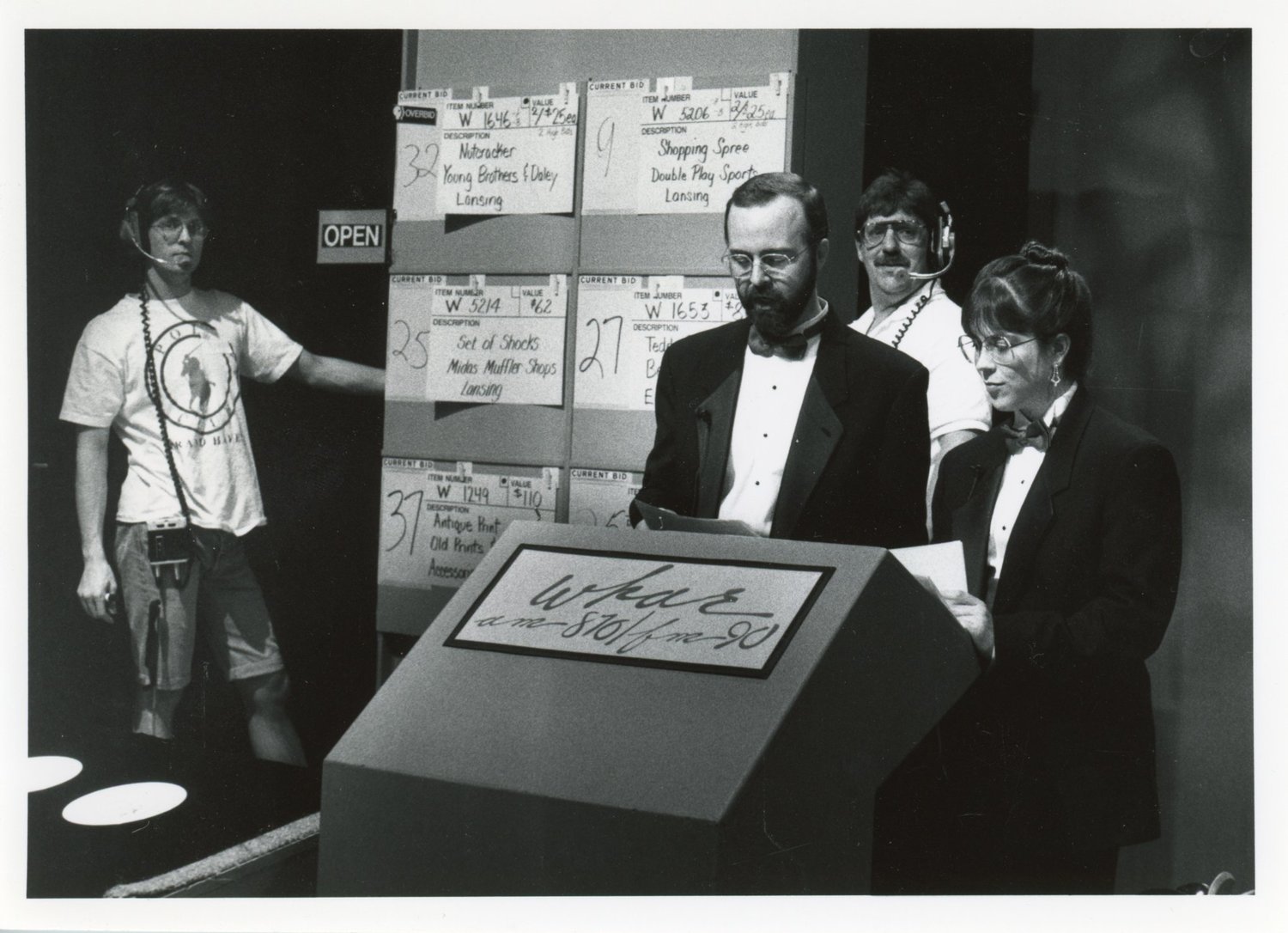 In celebration of this milestone, the station hosts an open house to mark its centennial on Saturday at the WKAR studios, on the second floor of MSU’s Communication Arts and Sciences building.
Courtesy of WKAR
Posted Thursday, August 18, 2022 12:00 am

In celebration of this milestone, the station hosts an open house to mark its centennial on Saturday at the WKAR studios, on the second floor of MSU’s Communication Arts and Sciences building. ”
100 Years WKAR: A Century of Service
404 Wilson Road
East Lansing, MI

It was an experiment that nearly torpedoed the infant radio station before it could grow to maturity, much less mark a “Century of Service.”

As WKAR interim general manager Shawn Turner recalled, a group of World War I vets were “testing” some military surplus broadcast equipment. They didn’t think anyone could hear them, but their chatter unknowingly went out over a 15-mile radius.

“The dialogue was … somewhat irreverent,” Turner said. This outraged some at the then-Michigan Agricultural College, and the “Radio Club” soon faced being disbanded. Fortunately, cooler heads prevailed.

“There were visionary leaders here at MSU who recognized the technology had immense potential value to the community,” Turner said.

By Aug. 18. 1922, the fledgling station officially signed on the airwaves for the first time — making this a banner year for WKAR.

“I find it fascinating because it almost never happened,” Turner said. “There were just a few individuals here, that incident notwithstanding, who said, ‘We have something here we can use to serve the community.’ That’s how it all started.”

In celebration of this milestone, the station hosts an open house to mark its centennial on Saturday at the WKAR studios, on the second floor of MSU’s Communication Arts and Sciences building.

Visitors will get a glimpse into the inner workings of the WKAR television, radio and digital studios and see where the next generation of the station is headed.

That next era might include Turner, who comes to his current position with an atypical background — including 21 years in the Marine Corps and a job as the deputy White House press secretary for national security.

Turner’s wife, Monique Mitchell Turner, is an MSU grad who chairs the communications department in the College of Communication Arts and Sciences.

“I remember it so vividly,” he recalled. “26 years ago, on our second date, I asked her what her dream job was, just making conversation. She said someday I’d like to go back to MSU and be the chair of the COM department there.”

As for Shawn Turner, the native of inner-city Cincinnati said he didn’t have much while growing up, so access to public media helped expand his horizons.

“It really helped me open my eyes to the world.”

And then there’s WKAR.

“This station and the people here are focused on what it means to go out and be a part of the community, more so than any other station I’ve been associated with,” Turner said.

At the event, dubbed “100 Years —WKAR: A Century of Service,” fans of local on-air staff can put faces to the voices that keep them company throughout the day. And some of those voices have been around for decades.

Jody Knol, the classical host, began at WKAR as a student in early 1982. The Grand Rapids native studied music and theater at Calvin College before transferring to MSU. Much like WKAR’s genesis, his foray into radio was by chance.

One summer night, Knol was working at a restaurant in Grand Rapids. WOOD-TV anchor Jay Johnson was dining alone, and it happened to be a slow evening. The pair had time to chat. By coincidence, Johnson had worked at WKAR as a student employee.

“He said, ‘Do you like music?’ Yes, I do,’” replied Knol, a one-time music major. Johnson then encouraged Knol to apply at WKAR radio “because they were always looking for students who could talk about music on the air.”

Johnson left his business card with the hostess on the way out, with a note on the back addressed to WKAR’s then-program director: “Hal Prentice: Give this guy a job. He knows music,” Knol fondly recalled.

Since then, the station has undergone many operational changes over the years. From reel-to-reel tape machines and vinyl, the standard in Knol’s early years, to today when music is often loaded from a computer hard drive. Though, one thing that has not changed over the last 100 years is the connection with listeners. Through both good times and rough times.

“I remember after 9/11 we were not doing classical music for several days because it was wall-to-wall NPR coverage,” Knol recalled. “When we went back on the air, we just had to gently ease back into that and be sensitive to how people were thinking.

“I do think the station is a community bond that a lot of people feel,” he added. “Whether they’re in mid-Michigan or beyond now (listening via web stream), there’s comfort in hearing local commentary and listening to music together in a shared experience. That’s what makes (WKAR) different than a SiriusXM radio.”

That international bond also flourishes with online listeners all over the world. Knol said WKAR was one of the first public radio stations with a web stream launched more than 20 years ago. From its humble genesis — an accidental live broadcast during the WWI era — to listeners now tuning in worldwide, WKAR’s journey is one of continual evolution.

“We’re finding more and more MSU alumni around the world are enjoying listening to the station because it brings them back to their roots of studying at MSU,” Knol said. “They want to know what the temperature is here.”