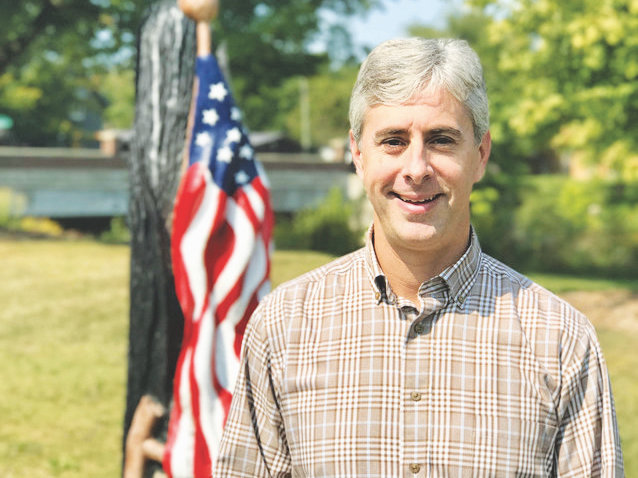 Greg Talberg, who was recalled from his seat on the Williamston schools board over the district’s pro-trans rights policy, applauded the ACLU of Michigan for intervening on behalf of LGBTS students.
Courtesy Photo
Posted Thursday, July 18, 2019 9:58 am
Chris Gray

A federal magistrate judge granted the ACLU of Michigan the authority to intervene on behalf of the Williamston High School Gay-Straight Alliance in their lawsuit with a fundamentalist Christian group, in a key legal victory for LGBTQ youth.

Jay Kaplan at the ACLU said his organization plans to ask the judge to dismiss the suit from David Kallman, the senior legal counsel for the Great Lakes Justice Center, a right-wing legal group based in Delta Township that’s opposed to LGBTQ rights.

Kallman had sued the Williamston School District to overturn its anti-bullying and non-discrimination policy, which gives trans students the ability to use the bathroom that matches their gender identity. But Kaplan says the lawsuit lacks merit and its proponents have not been harmed by the school’s policy nor had their privacy or their freedom of religion infringed.

“Members of the district are entitled to their religious beliefs, but it doesn’t give them a blanket veto on school policy,” Kaplan said. “We don’t believe there’s a stated claim on which relief may be granted.”

Kaplan said resolution in the case had been glacial. The lawsuit was first filed in early 2018, and they still had not gone into discovery or other legal fact-finding phases that set the evidence on which Federal District Judge Paul L. Maloney, a Bush appointee, would weigh.

The Great Lakes Justice Center is nominally backing a small group of parents opposed to the district’s policy toward trans students, but the group regularly intervenes to push a right-wing agenda on social issues.

In addition to fighting to block progress on LGBTQ rights in Michigan, the Great Lakes Justice Center filed an amicus brief in support of President Trump’s ban on entry from several Muslim countries. The center also opposes abortion rights and roots its positions on carefully selected Bible verses.

The lawsuit states that plaintiffs “do not oppose or demean any person for who they truly are as a person” but “sincerely believe the Bible teaches that human beings were created male and female and that gender is neither fluid nor a social construct. Plaintiffs sincerely believe that a person’s sex is established by the Creator with its own nature, essential properties, and purpose.” The lawsuit accuses the school district of wanting to “indoctrinate students into believing that alternative sexual lifestyles are approved by all and to shame and blame those who believe it is wrong and immoral.”

Talberg, a civics teacher at Howell Public Schools with two daughters in Williamston schools, said the idea for the policy came not from the board members but from Williamston Community Schools students, who were surveyed and reported that stronger, more specific policies protecting LGBTQ students from harassment and discrimination were needed.

“The statistics are really, really clear that the numbers of LGBTQ youth at risk are much higher than other students. Everyone knows that they are more at risk of terrible things that happen to kids,” such as suicide, drug abuse and running away from home, said Talberg. “Any support that our kids can get, I appreciate it as a parent in the district.”

Talberg said he had also taught trans students at Howell High School, increasing his awareness of their concerns. Howell has anti-discrimination policies but no specific policies on gender identity, putting students at the discretion of the teacher and school officials.

Talberg was recalled by just 58 votes and replaced on the board by Karen Potter, but just a one-vote difference on the board has not been enough to make it change its policy. Gov. Gretchen Whitmer recognized Talberg’s pioneering spirit in education by naming him to the Governor’s Educator Advisory Council in May.

The schools had been nudged toward more progressive policies for LGBTQ youth by President Obama — a federal position that the current education secretary, Betsy DeVos, reversed, and court battles over legal protections for gay and transgender people are ongoing. How all of those legal battles will shake out is still unknown. “I didn’t think it’s fair for these kids to tell them they should just wait,” said Talberg.