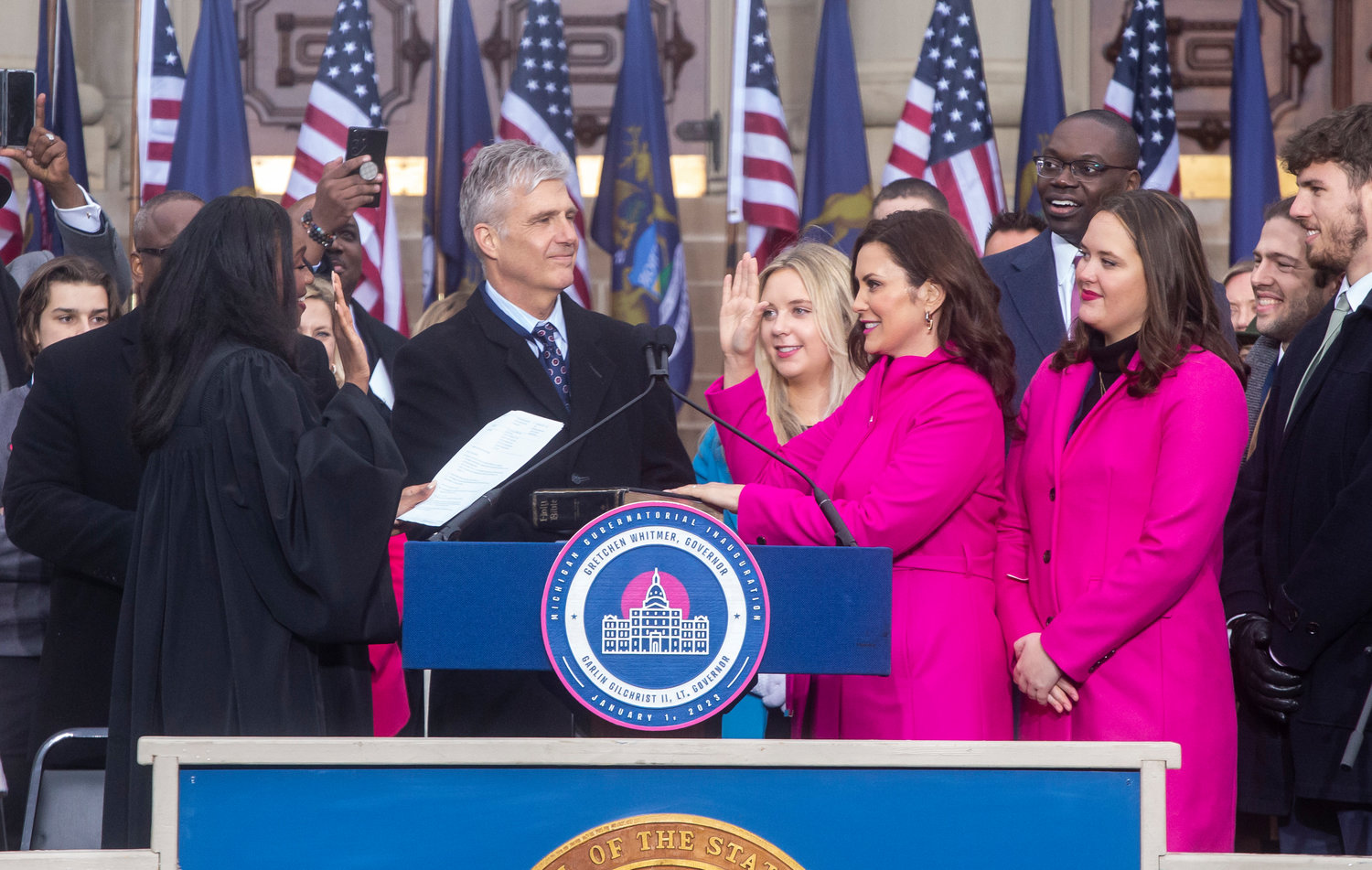 Gov. Gretchen Whitmer as she was being sworn in at her second inauguration two weeks ago at the Capitol.
Roxanne Frith for City Pulse
Posted Monday, January 23, 2023 5:30 am
Andrew Roth

When Gov. Gretchen Whitmer delivers her fifth State of the State address Wednesday — the first she’ll hold in person since 2020 —she will do so as the first governor to speak in front of a Democratic Legislature in 40 years.

Whitmer, a Democrat, could propose a litany of new, sweeping legislative priorities, seeking a more productive second term with a Legislature that is more inclined to work toward achieving her policy goals.

But some failed proposals from Whitmer’s first four addresses could get a second chance under Lansing’s new partisan makeup.

“It’s been a very different past four years, where you’ve seen the governor lay out a vision and propose initiatives that, then, the Legislature doesn’t support,” said Sen. Mallory McMorrow, D-Royal Oak, the majority whip.

McMorrow pointed to policies like expanded access to child care and reducing the Black maternal mortality rate as issues where “a lot of things have been put forward as great visions that we’ve never had the chance to legislate on.”

Lt. Gov. Garlin Gilchrist referred to the first bills introduced in the Senate this year that would repeal Michigan’s so-called pension tax and expand the working families tax credit.

“These are things that we talked about in past State of the States, talked about in the past budgets and introduced as recommendations for past budgets,” Gilchrist said. “The opportunity to get that done now is more real than it’s been in the last four years because we have Democratic leadership in both legislative chambers.”

Gilchrist said that while he feels the Whitmer administration successfully navigated the challenges of governing with a Republican majority, passage of the new Senate bills would show that it can enact more of its agenda now.

“We’re going to build on that foundation, but I do think that there is going to be more possible,” Gilchrist said. “The repeal of the retirement tax and the working families tax credit being increased are going to be the clearest and quickest concrete evidence of that.”

Gilchrist said he is certain that Whitmer will talk about those policies during her speech.

“That’s going to be a key priority for us, right out of the gate,” Gilchrist said.

Gilchrist said that the administration’s overall vision remains the same,” but added that in some cases Democrats may be able to go farther than the governor had proposed when there was a Republican majority.

“Our hope is that the opportunity that the voters gave us is that we will be able to do more and go further than previously,” Gilchrist said. “That’s saying a lot, because we did a lot and went pretty far, even in the last four years,” referencing issues like education and economic development.

At a press conference, Nesbitt and Hall said Republicans would oppose attempts to repeal a law that automatically triggers an income tax cut if tax revenues exceed the rate of inflation. The rate would drop. from 4.25% to about 4.05%.

Whitmer’s administration has suggested lawmakers could revise the automatic trigger to account for the impact of the pandemic and the possibility that the state may head into a mild recession.

“We must commit that we will allow the people in Michigan to get this income tax cut,” Hall said.

However, Democratic legislators have not indicated if they would support halting the income tax drop.