‘West Side Story’ hits the streets of downtown Lansing 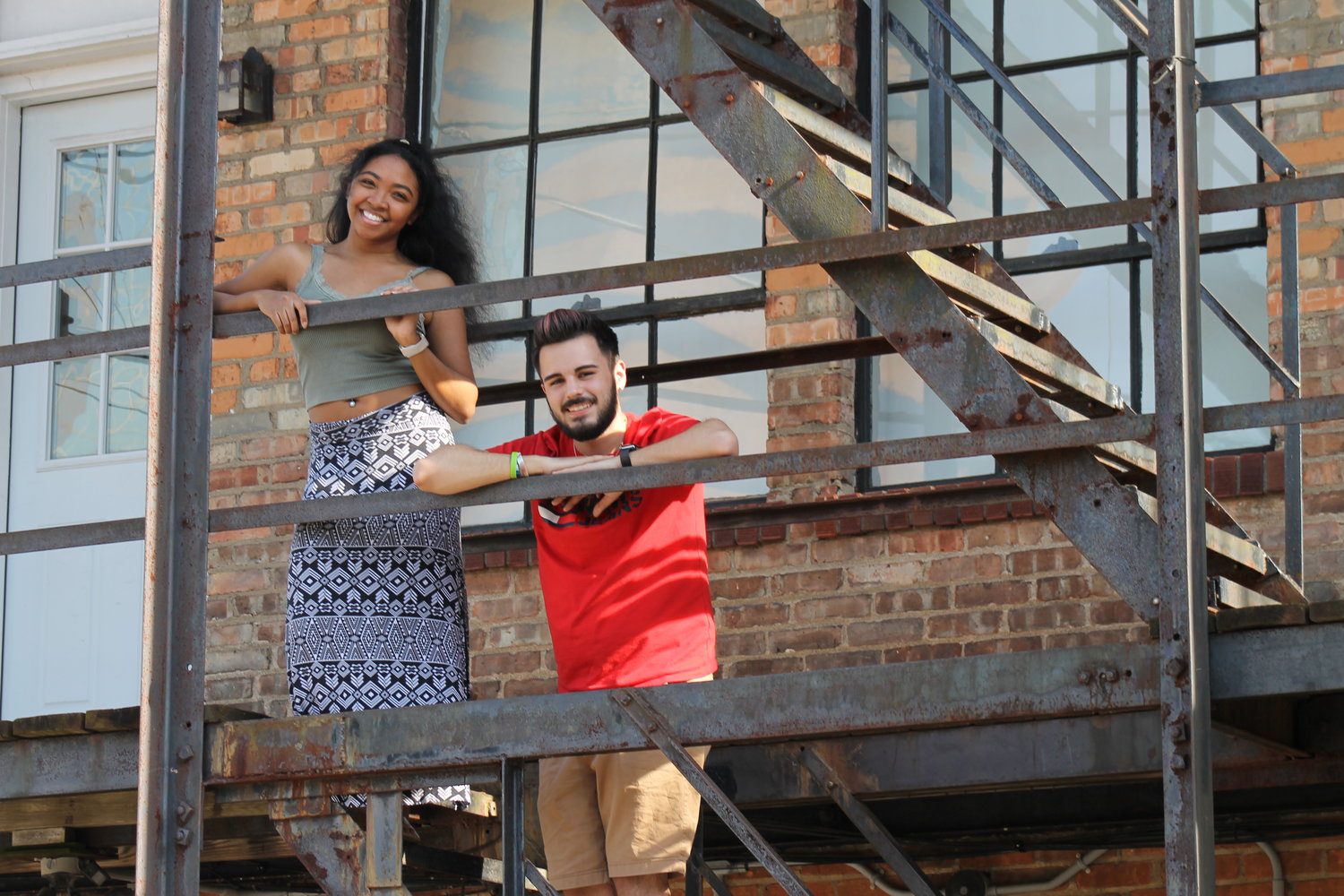 Tianna Leon, who portrays Anita in “West Side Story,” and Carlos Lenz, who plays one of the Shark gang members, on the fire escape where the show will be performed outdoors at 310 S. Grand Ave. It’s located across from the Michigan Department of Health and Human Services.
Todd Heywood 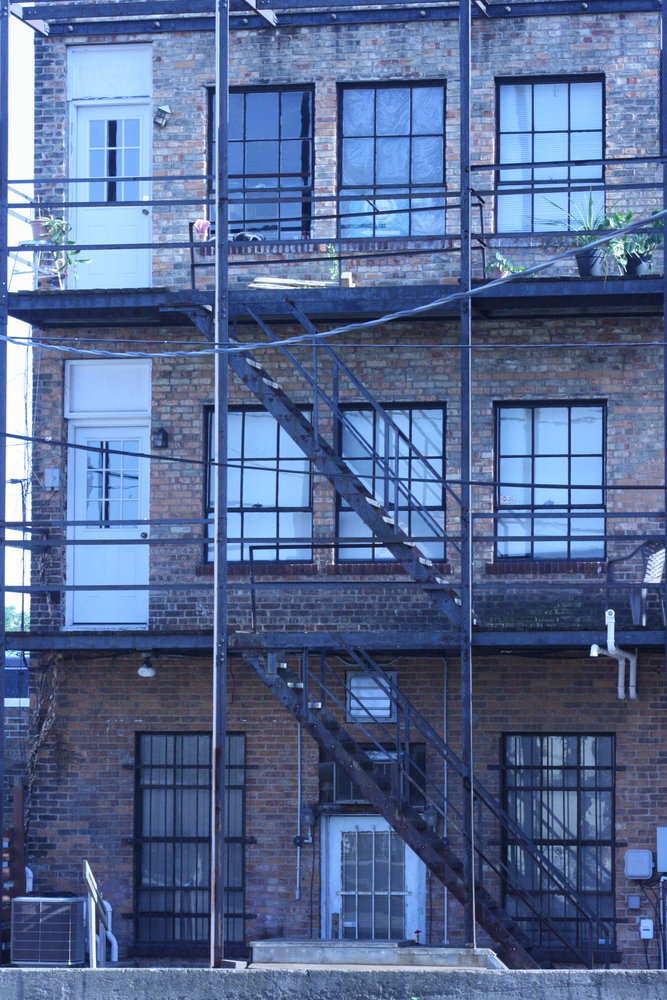 Welcome to Behind the Curtain, a new monthly feature spotlighting the local theater community.

Longtime Lansing community theater maven Linda Granger has led the ragtag Starlight Dinner Theater since 2005. Over the years, she’s steadily delivered longtime audience favorites, including a laundry list of outstanding comedies, like last month’s “Harvey.” But this month, she’s taking her vision of producing modern classics in a new direction and an unlikely location. She’s producing and directing the classic musical “West Side Story” on the streets of downtown Lansing.

The show will happen on the back of 310 S. Grand Ave., a building near the CATA bus station. The unique performance space is located across from the Michigan Department of Health and Human Services building at Grand and Kalamazoo Street. This allows actors to use the already existing building features, like a fire escape, for the performance. The established infrastructure, along with a set of scaffolding, adds not only more levels to the set, but a fitting realness to the production.

Granger said her sister, Lori Arendsen, is developing the choreography. Both women first saw the show in downtown Lansing in 1974 and again in 1978 when it was performed outside near Lansing Community College. It hooked both of them.

“West Side Story, a retelling of “Romeo and Juliet” with New York street gangs, debuted on Broadway in 1957 with the score by Leonard Bernstein and the words by newcomer Stephen Sondheim. It was turned into a successful film in 1961.

Stephen Spielberg directed and released a movie version of the musical last year. The version featured a script by Tony Award-winning playwright Tony Kushner, but the script and film were widely panned as feeding into, rather than challenging, the racial stereotyping and overall racism of the show.

Granger said she reached out to local schools, and Lansing community theater and Latinx groups to ensure she effectively represented The Sharks, the Latinx gang. She said she is proud to introduce Lansing theater-goers to a new group of actors of color, most of whom are Latinx.

Tianna Leon, 28, spent her youth moving from community to community as a child of a military family. Even with the frequent relocations, she discovered a love for performance while attending high school in Utah. A decade later, she’s returning to the stage here in Lansing.

Leon, who works with the maternal and child health division at the Ingham County Health Department, was cast as Anita, the sarcastic and bossy recent immigrant from Puerto Rico. She plays a protective sisterly role to Maria, the female romantic lead character in the show.

“She’s trying to fit into this world she’s just immigrated to,” Leon said of her character. “As someone who moved around a lot, I understand that.”

As for doing the iconic musical outdoors behind the Edge Partnerships building in downtown, she said that was part of the draw for auditioning. That outdoor space, she said, will add to the realism and story telling.

“I think it will really pull people into the story,” she said.

As a person of color, she said she walked away from theater for nearly a decade. The departure was, in part, because she felt she was not being afforded the experience in playing roles not traditionally seen as characters of color.

“Are they looking for somebody who looks like me to be in these roles? Because I have never seen anyone that looks like me in these roles,” she said of the auditioning process. “I really like the idea that I can show others who look like me that we can make a name for ourselves in the theater. That we can be seen, instead of invisible.”

The Lansing theater community has been much less judgmental and supportive, she said, than her previous experiences. In fact, she said, her Riverwalk Theater cast mates directed her to the production. Working in this “West Side Story” production, she said it’s been “surreal” to see other people of color on the stage and having fun.

Joining Leon in the show is Carlos Lenz, 22, an LCC theater program graduate. He works at Quality Dairy and you might recognize him as a featured employee on QD marketing materials. He laughs about being in a musical, noting he never thought of himself as a singer or dancer.

He said shifting his theater education to online was one of the most difficult things he’d experienced, but fought through it. He found out about “West Side Story” from a co-worker at another job and called Granger.

“It feels different,” he said. “We don’t just have people pretending to be Latino.”

While he is Latino, he said he was adopted and didn’t really begin to explore his roots until his senior year at Holt High School.

“I don’t feel isolated,” he said of being in a multiracial production, adding that he is thrilled about performing under the sky.

“The location is perfect,” he said. “I have never done a show where it was so right on. This is not a stage. It was never meant to be a stage, it’s a parking lot. We’re making a space.”

The show was made possible by a partnership with Downtown Lansing, Inc. and a mini-grant from the Arts Council of Greater Lansing and the Michigan Arts and Culture Council. A rain date is set June 27, if weather causes a cancellation.

“Tracy Jones”: Williamston Theater, May 21-June 19, williamstontheatre.org. This comedy follows the attempts by Tracy Jones to find connection in an isolated world. Tracy has invited every woman named Tracy Jones she can find to a meet and greet. Directed by Tony Caselli.

“Fun Home”: Peppermint Creek, June 2-12, peppermintcreek.org. With the sudden death of Alison’s father, she takes a deep dive into his story and her own. It’s a story about love, family, secrets and acceptance. Directed by Mary Job.

“The Realistic Joneses”: Over the Ledge Theater, CANCELED, overtheledge.org This show, which was supposed to run June 2-12, has been canceled. The city of Grand Ledge has red tagged the venue because of safety concerns.

“The Revolutionists”: Riverwalk Theater, June 9-19, riverwalktheatre.com. This comedy introduces the audience to four “beautiful badass women” who are beheaded during the French Revolution. Directed by Tom Ferris.