We olive a good burger 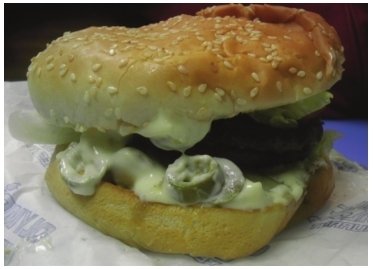 Posted Wednesday, February 13, 2013 12:00 am
Allan I. Ross
Of the many things Michigan is famous for — the Great Lakes, Motown music, Madonna — some things tend to fly under the national radar and remain (mostly) local secrets — the Sleeping Bear Dunes, Mackinac Island, Bruce Campbell. You may be surprised to find out that the subject of this month’s Food Fight is one of these Michigan originals: olive burgers. That’s right: chopped green olives stirred into mayo and slathered on a burger started right here in the Mitten. And according to one of the restaurants on our tour, they started at that particular establishment.

We narrowed the list of the area’s best olive burgers down to seven restaurants, based on an informal online poll through City Pulse’s Facebook page. Our team then spent one whole night driving around town, divvying up a burger at each place and ranking it in an utterly subjective and entirely unscientific fashion. The burgers were graded from 1 to 10 in six sections, with those scores averaged together to get an overall rating. Each part of the burger was graded separately (patty, bun, olive sauce, toppings) as well as the cost per portion and an unspecified X-factor category, which either hurt or helped the score based on that judge’s overall perception.

And yeah, we understood the futility of undertaking a project like olive burgers. There’s not a lot of middle ground — you either love ‘em or you hate ‘em. Kind of like Kid Rock, another Michigan original. What is it about our state that creates such a dichotomy in our collective taste?

Out of the more than 50 people who weighed in on our Facebook page, more than a quarter suggested Kewpee’s as the best in town. We’re not sure if this was out of nostalgia or if the downtown staple recently changed its recipe, but we certainly didn’t find this to be the case at all. The olive sauce was “barely perceptible,” the bun was deemed “too plain” and the patty reminded one of us of “a middle school cafeteria burger.” One of our judges found the sauce had “a nice tang,” however, and we all found the Swiss cheese “really worked” in tandem with the sauce. We went with the “colossal” size, which didn’t seem enough for the $8. And bad news: no sides. Kewpee’s, 118 S. Washington Square, Lansing, (517) 482-8049.

When we called ahead to make sure they had olive burgers on the menu, we were told on the phone: “Sure do — best olive burgers in town.” That may not have been the case, but it certainly was decent. For $4.51, it was declared a “good cost for an acceptable burger,” but some of us found it “overcooked” and the patty “under-seasoned.” It was utterly conventional across the board otherwise, with nothing objectionable standing out — the words “fair,” “average” and “typical” popped up a few times. Alas, none of us used the word “best.” LeRoy’s, 1526 S. Cedar St., Lansing, (517) 482-0184.

This “solid, no-frills burger” has the “olive-iest” sauce in town, for which it earned high marks from all our judges. One of our judges thoroughly enjoyed the “backyard barbecue taste,” but another thought it was “on the bland side.” The scoop-shape of the sauce was a little off-putting; the mini-dome on top of the burger just looked weird. And come on, Peanut Barrel, can you abolish the “two Long Island maximum” rule already? Some of us can handle it. Peanut Barrel, 521 E. Grand River Ave., East Lansing, (517) 351-0608.

Leo’s was one of only two places, besides Peanut Barrel, to take a temperature on the burger. We ordered ours medium rare, and it came out just the way we liked it — warm, but still a little pink in the middle. The “tender,” “well-seasoned” patty had the “best texture” and was called out for its freshness across the board. The sauce had a “good mayo-to-olive ratio” and the “slightly buttered” “grilled sesame” bun was nice. It did come with fries, possibly the reason it was one of the more expensive burgers of the night ($9.74), which we agreed was worth it. Leo’s Outpost, 600 S. Pennsylvania Ave., Lansing, (517) 367-7755.

For a place that’s built its reputation on having the best burgers in town, well, they’re not too far off base. The patty was thick and juicy, the toasted sesame seed bun was a nice touch, and the “dynamite” olive sauce had chopped onions in it — a welcome twist on the traditional mayo-and-olive recipe. Basically, “a solid olive burger, but nothing really special stands out.” The big scoop here was our waitress’s confirmation that Bonnie’s is being sold soon, possibly as early as the end of the month. Whether it’s actually closing remains to be seen. Bonnie’s Place, 415 E. Saginaw St., Lansing, (517) 482-4404.

It’s always difficult to pull off a true surprise Food Fight at an establishment — the whole “four to six people sharing one dish” thing tends to raise a few eyebrows. So, inevitably, when we ordered our olive burger and sat down to dig in, owner Mike Alexander stopped by to see what we were up to. We admitted our mission, and he surprised us with the little tidbit that his father, Jimmy — a Greek immigrant and the founder of “Ollie Bro” (as some of our judges have lovingly nicknamed the place) — was the inventor of the olive burger. Alexander even said he had photographic evidence (and the trademark) to prove it: A menu from 1967, but we didn’t stick around to see it. We did, however, enjoy the “soft, thick” patty with “olives that were gushing off the side” and the best price in town: $3.09 for a double. We all enjoyed the sesame seed bun as well as the fresh lettuce and tomato. The sauce itself was unremarkable, “pretty classic,” but we’ll definitely be back — if, for no other reason, to see that menu. That’s history, folks. Olympic Broil, 1320 N. Grand River Ave., Lansing (517) 485-8584.

Full disclosure: This place was already a favorite for one of the judges. He showed us that the best way to order an olive burger is taking one of Harry’s Greek Burgers (which is stuffed with olives, feta cheese and sundried tomatoes and topped with tzatziki sauce) and add olive sauce to it. Opa! The best olive burger in town, and our judges couldn’t stop raving. “Olive sauce and tzatziki are a deadly combo.” “Stuffed with deliciousness.” “Too much awesomeness to deny.” “Great, spongy sesame seed bun holds it together perfectly.” Yeah, it was a special order, which could be considered cheating, but when you stumble on something great, how can you not share it with the world? Ladies and gentlemen, we humbly submit Lansing’s best-kept secret. Harry’s Place, 404 N. Verlinden Ave., Lansing, (517) 484-9661.

We had also planned to visit Center Stage in Lansing Township, a place none of us had previously visited, but we had a bad surprise. We even called ahead to make sure they served olive burgers and to find out what time the kitchen was open until (yes, and 11 p.m., respectively), but when we showed up at 10:30 p.m., they were closed. This would have been the first time any of us would have dined there, based on three shout-outs to the place on our Facebook wall, but pulling the ol’ early close earned no new fans that day.

If you’d like to weigh in with your own choices or rip any of ours to shreds, email us at food@lansingcitypulse.com.

Flash in the pan: The lovage is real: Celery on steroids