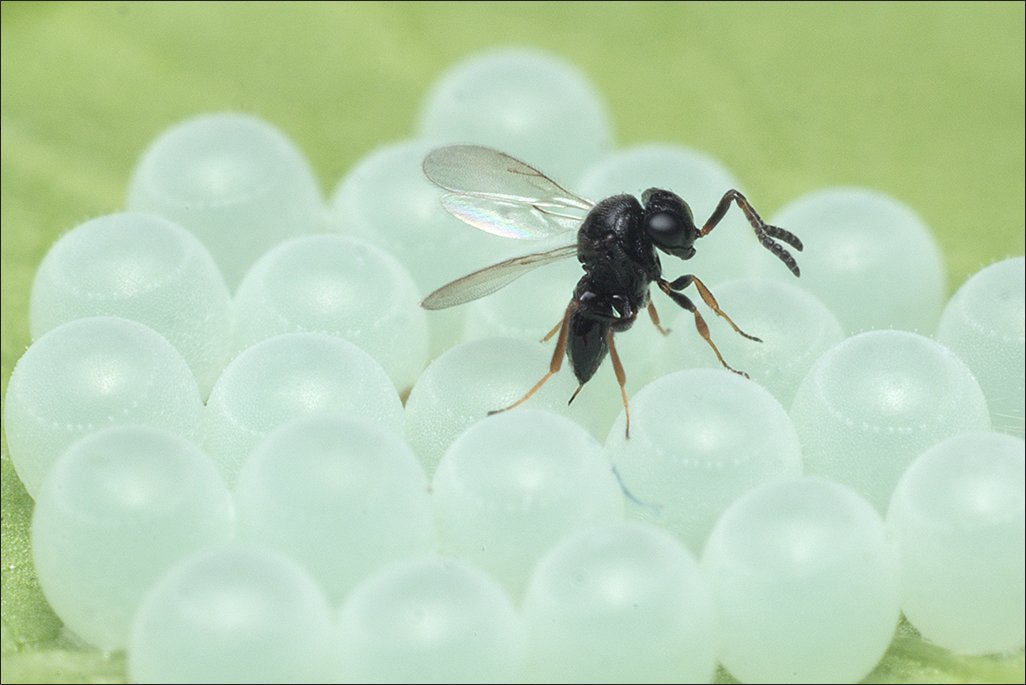 LANSING — Sometimes you have to fight invasive species with outside help.

At least that’s the idea behind raising and releasing the non-native samurai wasps into Michigan’s environment to battle the brown marmorated stink bug. The program was allowed in Michigan only after the 2018 discovery that the southeast Asian wasp was already within the state’s borders.

“States that find it can start their rearing program to boost their numbers,” said Marianna Szucs, a professor of entomology at Michigan State University whose lab is raising samurai wasps. Her group released 4,000 adult wasps and 88 egg masses this summer near Grand Rapids.

The brown marmorated stink bug is a costly nuisance around the Great Lakes. It causes “severe agricultural and nuisance problems” in Michigan, New York and Pennsylvania, according to an initiative funded by several federal agencies. They damage crops and infest homes and businesses in the fall and winter.

Illinois, Indiana, Minnesota, Ohio and Wisconsin have “recurring populations at or below economically damaging levels.”

In the mid-Atlantic states, where brown marmorated stink bugs have been established longer, one particularly large outbreak ruined 90% of some peach farmers’ crop. In 2010, that region reported $37 million in damages to fruit.

The arrival of the samurai wasp may help Michigan avoid such significant losses, Szucs said.

The wasp, no larger than a sesame seed, lays its eggs inside of stink bug eggs. The growing wasp embryos consume the stink bug embryos. When the eggs hatch, samurai wasps emerge, Szucs said.

And, regardless of release program, the wasps will spread on their own. Releasing them only speeds their spread and that of stink bug population control.

It’s most accurate to call the samurai wasp a non-native species and the brown marmorated stink bug an invasive species. Non-native species only become invasive when they reach high densities and start causing economic or other harmful effects, Szucs said.

In and around Maryland, where the first samurai wasp was discovered in 2014, brown marmorated stink bug populations seem to have decreased, said Paula Shrewsbury, a professor of entomology at the University of Maryland.

In the years around 2010, she and her colleagues were inundated with worried phone calls and emails about brown marmorated stink bugs. In recent years, she said, more people are asking, “Where are the stink bugs?”

The apparent decrease is likely due in part to the samurai wasp population growing there since it arrived in 2014 and native parasitic wasps that can attack brown marmorated stink bug eggs. Even with the discovery that native wasps can infest brown marmorated stink bug eggs, it can still be worth the trouble of raising and releasing samurai wasps. Stink bugs can be that damaging, Shrewsbury said.

Other countries are more aggressive with samurai wasp programs.

Canada is paving the way to move samurai wasps from British Columbia to other provinces where it hasn’t yet been found, Szucs said. New Zealand preemptively approved samurai wasp releases, after intercepting brown marmorated stink bugs at its borders several times.

“Most countries came to the conclusion that brown marmorated stink bugs can be such a huge problem and the samurai wasp can be such an effective biocontrol agent that it’s worth the risk,” Szucs said.

Her program constantly monitors the risks, though lab trials suggest that damaging unintended consequences are unlikely.

Brown marmorated stink bugs are versatile pests and can feed on over 300 plants: “almost anything that produces fruit, pods, or nuts,” according to a document published by Michigan State’s College of Agriculture and Natural Resources.

Traps are turning up fewer stink bugs this year: an average of seven to last year’s 12, according to Michigan State researchers.

The difference is likely due to a cool, wet spring and not the early returns on samurai wasp releases. Any wasp effect in reining in the stink bug population likely won’t be seen until their populations grow for several years, Szucs said.

Even then, samurai wasps will never entirely eliminate brown marmorated stink bugs from their new home in Michigan.

“With biological control the aim is not eradication. So even if the wasps will be super- effective, it just means they reduced the stink bug populations to a much lower level,” Szucs said.

But in some ways biological control is preferable to other forms of stink bug management.

“Biological control is the only long-term solution to them because [brown marmorated stink bugs] have a huge host range. They can feed on hundreds of plants,” Szucs said. They don’t only exist on economically valuable plants that people protect with pesticides. They live on plenty of plants that aren’t sprayed.

Samurai wasps, on the other hand, can follow stink bugs wherever they go.

“They can control them on the landscape level,” Szucs said.

Andrew Blok is a reporter for Great Lakes Echo