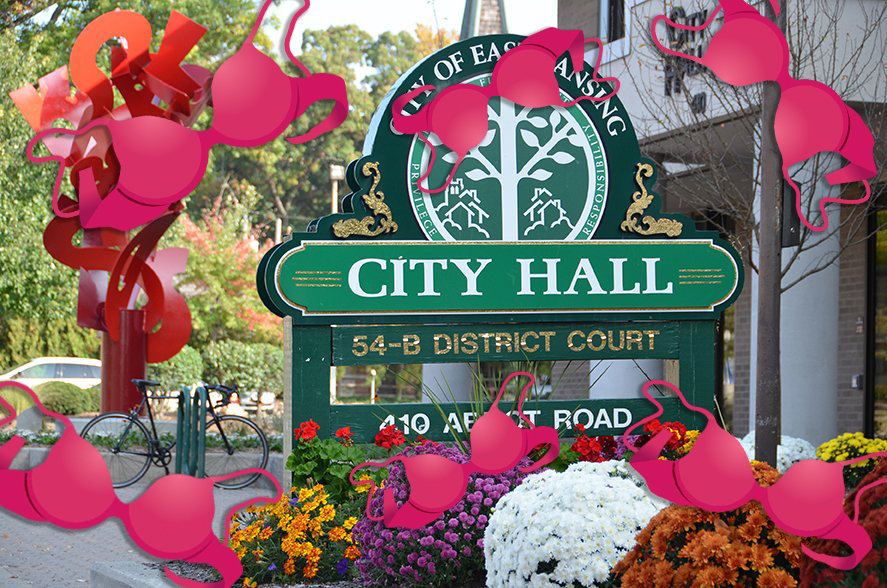 THURSDAY, Dec. 3 — The nipple has been set free in the city of East Lansing.

City ordinances in East Lansing have long described “disorderly conduct” to include the willful public exposure of “buttocks or genitalia” — as well as the female breast. But as of this week, bare breasts are no longer a crime. City Council members said the change was about equality.

“In East Lansing, you’re not going to be arrested or charged over doing something that a man can do but a woman cannot do,” explained Mayor Aaron Stephens. “It cleaned up the books.”

The Council voted 5-0 on Tuesday to unanimously amend portions of its disorderly conduct laws, in part by removing a clause that specifically prohibited women from exposing their breasts. The idea: ensure women aren’t unfairly charged with crimes that men cannot commit.

“There’s a huge double standard in regards to men’s and women’s bodies,” said Councilwoman Jessy Gregg. “Some people might not be ready for that and consider it inappropriate, but we’re headed this way as a society in realizing that we can’t enforce a law that only affects women.”

Gregg and Stephens confirmed that toplessness alone can no longer elicit criminal charges. And while it was among the more provocative changes, it wasn’t the only local legal adjustment.

Stephens said the revisions are part of much broader efforts to amend city statutes, reform policies and procedures at the Police Department and ensure equitable laws for local residents.

Other changes included removing the ability for people to be arrested simply for taunting or chanting at the police. Stephens said that particular change was about promoting free speech.

The Council, in tandem with the city’s Human Rights Commission, also removed portions of previously “prohibited acts,” including clauses that had made it illegal to wear gas masks to avoid the effects of riot control agents, as well as ambiguous and historically racist “jostling” charges.

She asked: “Sure, spitting on the sidewalk is still pretty gross, but is it really criminal behavior?”

“It’s important to make sure that our laws are in line with what our goals are now,” Stephens explained, noting that recent changes to the disorderly conduct statute have been under review since spring. “It makes it a lot more difficult for a person to be prosecuted on these charges.”

Officials were careful to note that disorderly conduct charges can still be sought; The criteria has just been broadened a bit to focus on those who are actually creating problems. Other city laws may also still prohibit some of the conduct that was omitted from disorderly conduct statutes.

Gregg said the city’s ongoing efforts to revise its criminal statutes were triggered largely by two recent instances of alleged excessive force among its police officers. Though one accused officer was cleared of wrongdoing in a Michigan State Police investigation earlier this year, the Council is still committed to ensuring that local residents are treated fairly by their local cops.

City officials will next tackle revisions to the city’s policies surrounding police use of force while continuing to form plans for a more meaningful, citizen-oriented police oversight committee. Two social workers were also recently hired to be embedded directly within the Police Department.

The incremental nature of the changes may prove essential to driving forward meaningful public safety reforms in East Lansing. Radical reform — especially when it involves controversial topics like police reform — can often taste better by the spoonful, Gregg explained.

“I know Councilman Brandon Betz, for example, also had some seriously aggressive goals in Lansing. In East Lansing, we sort of took the opposite tactic. We’re starting with small changes and ensuring they make the impact that we’re intended they have for our residents. This is certainly not the end. I’d really consider it more of a beginning to a very long, ongoing process.”

Eyesore of the Week: Aug. 3rd

The news outlet, known to many as ELi, suspended publishing news in May.