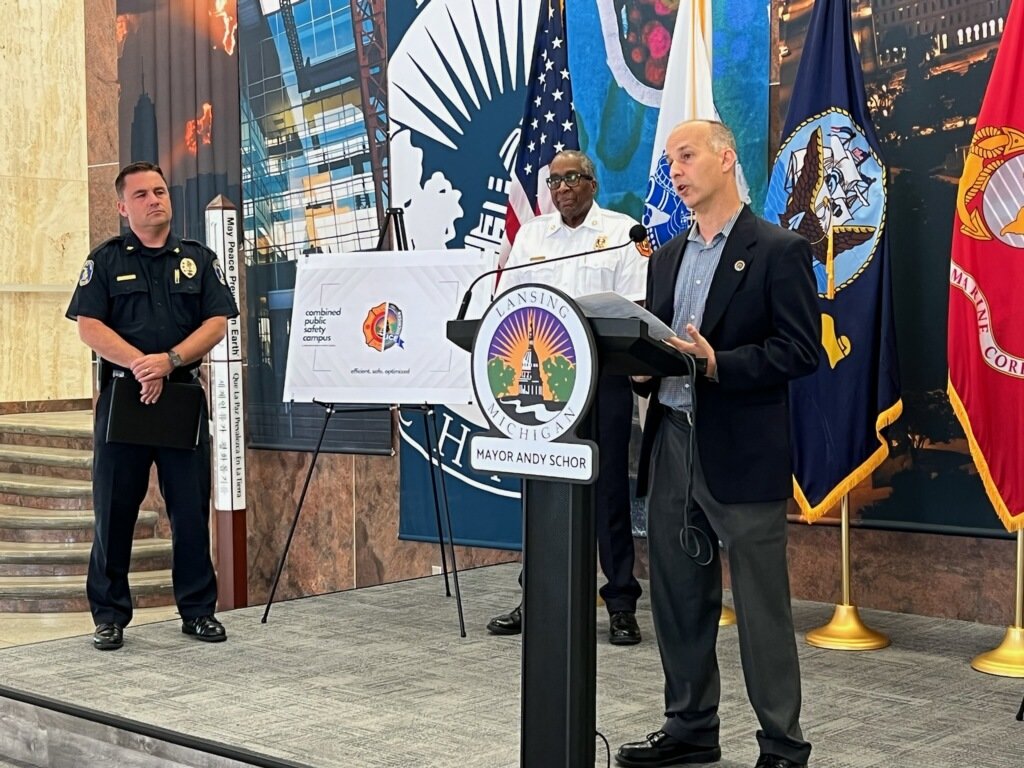 One of Lansing Mayor Andy Schor’s first acts in office in 2018 was to pull the plug on his predecessor’s plan to move to a new city hall because it didn’t include a home for the police or the courts.

His argument was it wasn’t fiscally prudent.

Now, with a big reelection win under his belt, he’s rolled out a proposal that would cost $175 million and would burden residents for 30 years with a 3.9 mill property tax increase. That’s $153 more a year on the average, $76,600 house.

Most of the money would go to build a facility to house the Police Department and lock up and the Fire Department administrative offices The rest would be used to refurbish the city’s fire stations.

And the plan is really only part one. If voters approve it, it would clear the way for finally selling the current City Hall and moving city offices elsewhere: price tag unknown.

Before that can happen, Schor first has to convince a supermajority of the City Council to put his proposal on the ballot. Schor is aiming for the General Election on Nov. 8.

Former Council President Peter Spadafore is predicting Schor can get the six votes. But he is not putting his political neck on the line to support it.

“I will vote to put it on the ballot,” said Spadafore, an at-large member. “I will work, as a citizen not from the elected position, to pass it.”

“I will vote for it,” she said. “But that is only because I think it is needed. But the plan leaves a lot of unknowns for the city.”

First Ward Councilmember Brian Daniels said he will vote in favor as well.

Among the unknowns? What is the future of the 1958 City Hall complex, which hosts the administration, Council and courts as well as the Police Department leadership and some operations and the lock up.

In an interview with City Pulse, Schor called the combined public safety and courts building phase one in the process of exiting the current City Hall complex. It houses administrative offices and the Council offices and chambers, the City Clerk’s Office, 54-A District Court and the Lansing Police Department administration and jail.

Previous Mayor Virg Bernero tried to get a deal on City Hall with a Chicago developer as he was leaving office. The Chicago developer wanted to turn City Hall into a hotel and eatery. City Hall operations were to move to the former Lansing State Journal building at Lenawee Street and Grand Avenue. But the plan lackednd a home for police, fire and the courts. Particularly problematic was what to do with the city’s jail needs.

Both Schor and Bernero attempted to negotiate deals with Ingham County Sheriff Scott Wriggelsworth to send Lansing arrestees to the county jail in Mason, Bernero lobbied to place a new county jail in Lansing, which Wriggelsworth rejected. There were also discussions about combining the Lansing and East Lansing lock-up facilities. But no deal arose.

With no plan for the lock up, the Chicago deal died in 2018 after Schor took office and scuttled it.

“We had the fire chief and the police chief in, doing a presentation before,” Daniels said, referring to a June 13 briefing by the mayor and his team. “They had pictures and explanations as to what was needed and why. None of that was presented last night. The voters need to see those pictures, to understand what is going on.”

With the nation facing inflation and other economic woes, Steve Japinga of the Lansing Regional Chamber of Commerce said the business group was still trying to land on a stance for the increase.

“That’s something we’re concerned about,” he said. “Usually Lansing voters are very willing to approve millages, but I think they may be coming up against a wall and may just vote down the proposal because they don’t see a reason for a tax increase. They see it as an unneeded cost.”

The economic woes are not the only thing that may hamper the plan. Daniels, the First Ward Councilmember, said he was “disappointed” in the mayor’s presentation at Council Monday night.

Schor said he has not had any polling done on the proposal, and acknowledged the economic woes are a concern.

But he was undaunted.

“It’s time. This has been put off too long,” Schor said. “If we wait, the costs are only going to increase and so will the proposed bond costs.”

Spadafore concurred with that assessment, noting the city is spending $500,000 a year on maintenance for City Hall, and that is barely keeping the building operational. This year, a large tank of water used for cooling the building burst and flooded two floors.

Also supporting the needs are two independent studies Schor commissioned to review the Fire and Police departments. Both found significant issues in their facilities, as well as policy concerns.

The September 2021 Police audit found the downtown police facilities suffered from leaking ceilings, poor heating and cooling operations in the lock up and potential fire hazards. In the Wise Road facility, the report identified a lack of security barriers. In sum, the report called conditions a “suboptimal” message to residents.

Concerns about the condition of the city’s lock up date back to a space utilization study from 2016, where significant safety issues were identified.

The city learned this month that the city’s Fire Department facilities are also in need of upgrades. Among the concerns: non-gender segregated bathroom and sleeping areas, workout equipment in the sleeping quarters of some firehouses, and some firehouses having garage doors too small to accommodate modern fire vehicles.

Under Schor’s proposal, some of the firehouses will receive upgrades and at least one station will be replaced altogether. Fire administration, currently housed in Fire Station #1 at Shiawassee Street and Grand Avenue, would be moved to the new facility, freeing up living space there.

Spitzley, whose son is a Lansing firefighter, said she has toured the police and fire facilities and completely agrees with the need to upgrade them immediately. In fact, she said, she made updating the public safety facilities a key platform issue in her unsuccessful bid to challenge Schor for the Mayor’s Office last summer.

“Would I prefer a full plan for the future of the City Hall buildings?” she asked. “Yes, I would. But I think this is just too important to pass up.”