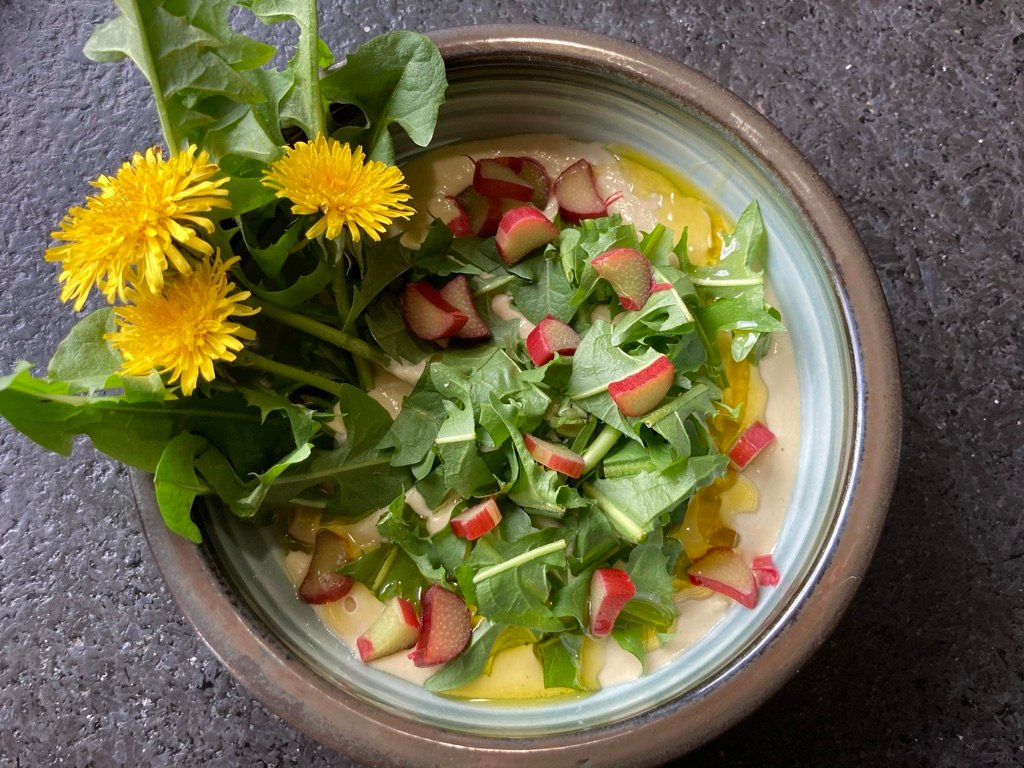 This feral salad contains many strong flavors, highlighted by bitter dandelions and the floral acidity of the rhubarb.
Courtesy
Posted Thursday, May 12, 2022 12:00 am
ARI LeVAUX

If you know any rhubarb recipes that call for less than a cup of sugar, you are a statistical anomaly. It’s understandable, given the culinary perfection made possible by the combination of rhubarb and strawberries — with or without pie crust.

The tart, juicy stalk of the rhubarb plant creates such an indisputably glorious flavor in concert with berries, fruit and sugar, what could possibly be gained by doing anything else? A lot, it turns out, as rhubarb can be used in savory ways, too. Its acidity can replace lemon or vinegar in soup, can act like a tomato in salad or something exotic in curry. Just remember to stick to the stalks and avoid the leaves, which have toxic levels of oxalic acid and are considered inedible.

The rhubarb in my neighborhood began growing about a month ago. I ushered in the season with a sour stew of lamb, potatoes, onions, carrots, celery and garlic. The tang of the rhubarb took the place of a glass of wine that I might otherwise have poured into the soup pot. Then, I made a rhubarb-based sauce in which I sautéed sliced rhubarb with onions and garlic and then pureed it. The flavor of that savory rhubarb sauce was similar to that of the applesauce one might enjoy on a pork chop. But of all of the savory ways I’ve prepared rhubarb, hummus is the best.

Rhubarb comes from Tibet, whence it spread north and east. Marco Polo brought some plants back to Europe from northern China and the descendants of these plants eventually made their way across the pond to the New World. Before it was everyone’s favorite substrate for vanilla ice cream, rhubarb was used medicinally in treating a variety of ailments. During the heyday of the Silk Road, dried rhubarb root was so prized that it could be more expensive than cinnamon, saffron or even opium. Today, modern science is vindicating many of the old medicinal uses for rhubarb. Compounds extracted from rhubarb are being used in chemotherapy and to treat Alzheimer’s disease. It’s also a powerful antimicrobial and antioxidant.

As rhubarb became established and widespread, its price came down. But the price of sugar remained high, so not much rhubarb got eaten until sugar became less expensive in the late 1800s. To this day, rhubarb is still sometimes called a pie plant. When rhubarb arrived from Europe, it’s thought to have first taken hold in Maine, an appropriately cantankerous place for this sour plant. It spread across the northern half of the country, establishing itself wherever there was a winter cold snap. Rhubarb has a way of finding neglected corners of gardens and alleyways, where it can live in peaceful obscurity. Thanks to this hearty, independent streak, people discover, adopt or otherwise inherit rhubarb more often than they plant it. But if you can’t find enough, or any, rhubarb growing in your neighborhood, you can probably pick up some baby plants at the farmers market. And now is a great time to plant it.

I make my rhubarb hummus thin enough to use as a dressing for a strong-flavored salad, such as with dandelion leaves or other wild greens. It’s a bitter, earthy way to usher in the new season in the spirit of a “spring tonic.” Back in the pioneering homesteader times, families would prepare a spring tonic at the end of a long winter. It was made of fresh plants and whatever else they could scrounge from the springtime landscape, to get a dose of nutrients and stimulate the digestive system. Rhubarb, rich in vitamins and minerals, was a popular ingredient in many spring tonics. Dandelion — another nutritious early riser — was also a popular spring tonic ingredient.

You might think that dandelions are too bitter for your tender sensibilities, but my rhubarb hummus will change that. Creamy, nutty and tangy, it smothers the dandelions to the point where their flavor is not overwhelming. Indeed, dandelion never tasted so mild-mannered. And some tart, juicy slices of rhubarb sprinkled on top play the role of early-season tomatoes.

This feral salad contains many strong flavors, highlighted by bitter dandelions and the floral acidity of the rhubarb. In addition to making dandelions edible to those who might otherwise find them too strong, this hummus also does a lovely job saucing up meat, pasta and vegetable dishes.

1 16-ounce can of garbanzo beans, or about a cup and a half of soaked garbanzos

For serving: fresh dandelion greens — flowers, stalks and roots too, if you wish — and more chopped rhubarb.

Add the hummus ingredients to the blender and blend until they are smooth. If the blender won’t make a proper vortex, add liquid from the garbanzo can or cooking pot. Adding all of the liquid in a can, about a cup, will make a thinner hummus fit to dress a salad like we’re making today.  For a hummus to use as a dip, add less water, which will make a thicker hummus.

To make the salad, toss the chopped dandelion greens with the hummus and scatter with chopped rhubarb. Drizzle with olive oil and serve.

Birria tacos are everywhere in Lansing. These are some of the best

Hakurei: The caviar of turnips