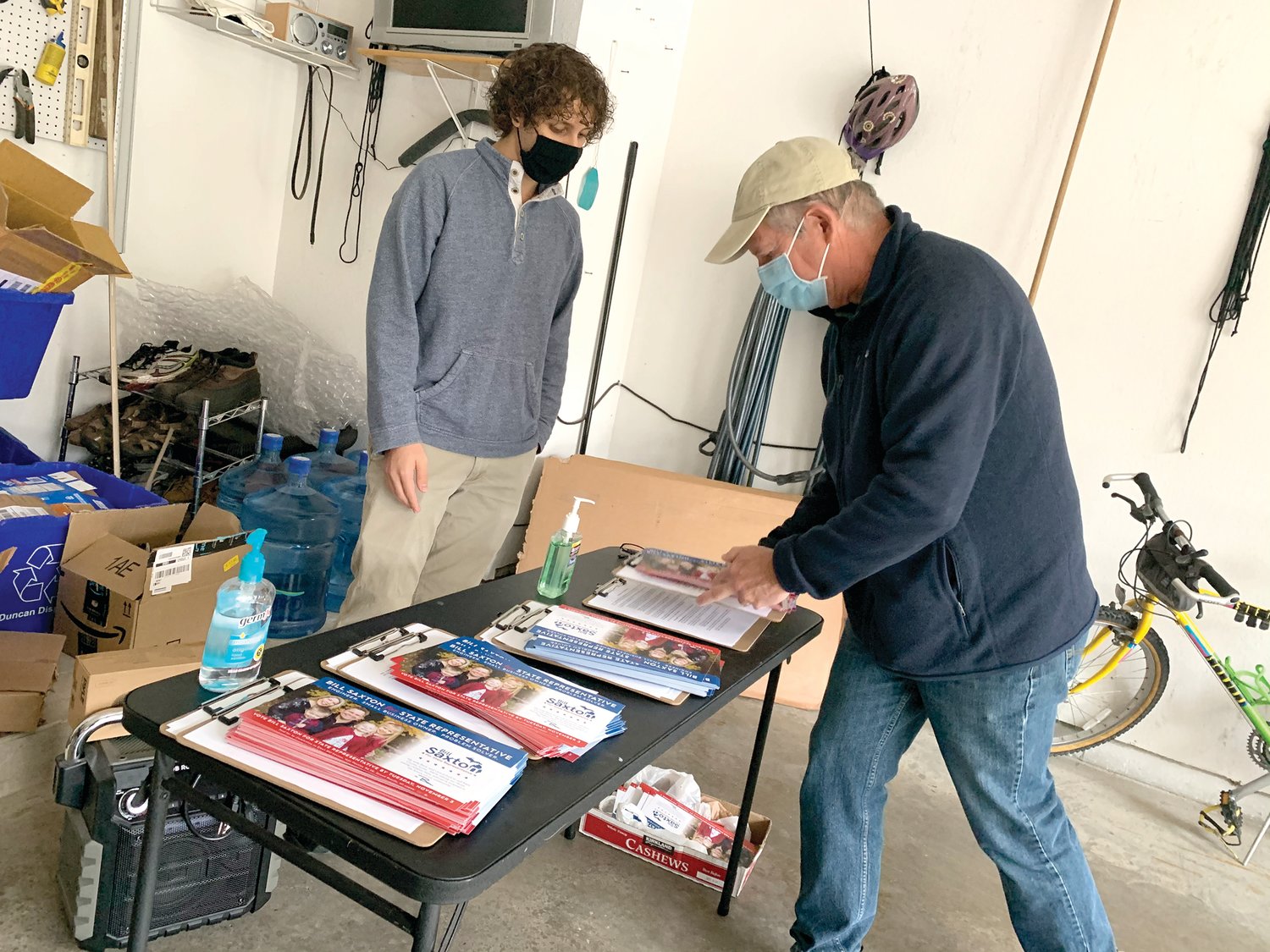 This is the fifth part in a six-part series reporting on the presidential campaign in Michigan in different locations across the state. This series is paid for by contributions from you to the

Behind the main roads, political yard signs have been interchanged for posh Halloween decorations. Plastic skeletons drinking imaginary tea from the porch and inflated tarantulas exist freely as a “Trump 2020 — No More Bullshit” flag hangs from a distant tree.

“They just want their low taxes, they want their schools to be good and they kind of want to be left alone and (free) to do their own thing,” Saxton said. “I would love to have more diversity in our area and be a little bit more welcoming to non-Caucasian families. That’s just the way the demographics are particularly in the suburbs and particularly in West Michigan in general.”

Saxton is competing against Republican newcomer Bryan Posthumus, a partner at the West Michigan Hopyards and the son of former Lt. Gov. Dick Posthumus, most recently ex-Gov. Rick Snyder’s chief of staff.

Saxton’s campaign committee raised $37,200 more than Posthumus since the primary and he feels great about that.

The Posthumus name is so strong. The candidate’s sister is the Kent County clerk.

They still feel the countywide candidates and local candidates like Posthumus should be fine, even if Democrat Joe Biden wins Kent County.

“Bryan Posthumus is a fantastic candidate who is working extremely hard and comes from a long lineage in the district,” he said. “I expect Bryan will win. I don’t see that part of Kent County swinging blue any time soon.”

But if projections are right and a record 5.9 to 6 million Michiganders show up to vote come Nov. 3, another longtime Kent County political consultant said, “A lot of things people never thought about becomes possible.”

The pro-life, pro-gun issues that voters tended to gravitate to in the northern Kent County suburban paradises of Rockford and Plainfield Township are being replaced by the more apolitical PFAS That’s the “forever chemicals” that contaminated the drinking water in hundreds of homes out here.

Of course, that’s not always the case.

At the first household Saxton visited that morning, a middle-aged woman described herself as a not-so-enthusiastic Republican. She said she didn’t vote for Donald Trump in Fall 2016 and can’t bring herself to vote for Biden because of “abortion and gay marriage.”

Stacie Newman, the marketing manager for a West Michigan paving contractor, said she is sure that if a same-sex couple moved into her Rockford neighborhood that people would freak out.

“The people who have graduated from here or who have lived here most of their adult life gravitate toward each other,” Newmann said. “As far as West Michigan is concerned — yes, it is very segregated. People in the different districts do have different ideas. They’re strong, very opinionated and are set one-way-or-another.”

Newmann is employed by a company that organizes events for Unlock Michigan and her oldest daughter attended slumber parties hosted by members of the DeVos dynasty — the clan that produced the Amway multi-level marketing company and Republican U.S. Secretary of Education Betsy DeVos.

“I feel that the government has become a way of life for some of these politicians. It’s their bread and butter. They need you to think what they think because that’s how they get paid,” Newmann said. “All of this is nonsense. Just get down to the point. What is your plan? Quit threatening me -- quit threatening my way of life.”

Stephanie Rossman, who’s now lived in this suburban wonderland for eight years, said Rockford is being driven by “hatred for each other and hostility.”

The single mother said she grew up being told that Rockford was very affluent and glued together by “cookie-cutter everything.”

“Over the last few years, it has changed. (It) is not nice, it is not quiet and quaint, it is not help-thy-neighbor —it is hostile. It is mean,” Rossman said. “Rockford is nothing but optics — it’s all smoke and mirrors, 100%.”

The members of Rossman’s page are now more centered on fulfilling their Election Day vices with posts like “Roses are red, Kamala’s not black, Joe’s in the basement and Hunter’s on crack” and “I think Biden is worthless as tits on a boar hog.”

However, Rossman said she doesn’t know what Rockford’s political identity is because she doesn’t necessarily care.

Rossman said she has an eighth grader who missed the first three weeks of school because he cannot comprehend digitized learning and she works too much to sit down at the computer with him.

Additionally, she built a $350,000 home across the street from a Wolverine World Wide dumpsite for their PFAS contamination. Local issues affect her greatly, but Rossman explained that she isn’t going to choose a champion anytime soon.

However, Saxton canvassers like Joan Long and Pei-Lan Tsou of Plainfield Township allowed that after Trump’s presidential victory in 2016, they owe it to themselves and their community to never vote Republican again.

“I’m a woman, I’m a person of color, I’m an immigrant, I’m a scientist. What reason do I have to vote Republican ever again in my life?” said Tsou, an associate professor at Grand Valley State University.

Once a left-leaning split-ticket voter, Tsou suggests that reactions toward the Trump rhetoric have cleaved their suburban harmony — residents are either red, blue or likely to hop into either-or at the last moment.

Long said that down her street, a neighbor has cocooned himself with MAGA flags and firearms. Although it makes her uncomfortable, Long knows that he’s preparing for their suburban snow globe to crack and burst.

“I retired in January of 2020 and everybody would ask me what I am going to do in retirement and I said, ‘My first 11 months is going to be everything I can to change the current administration,” she said.