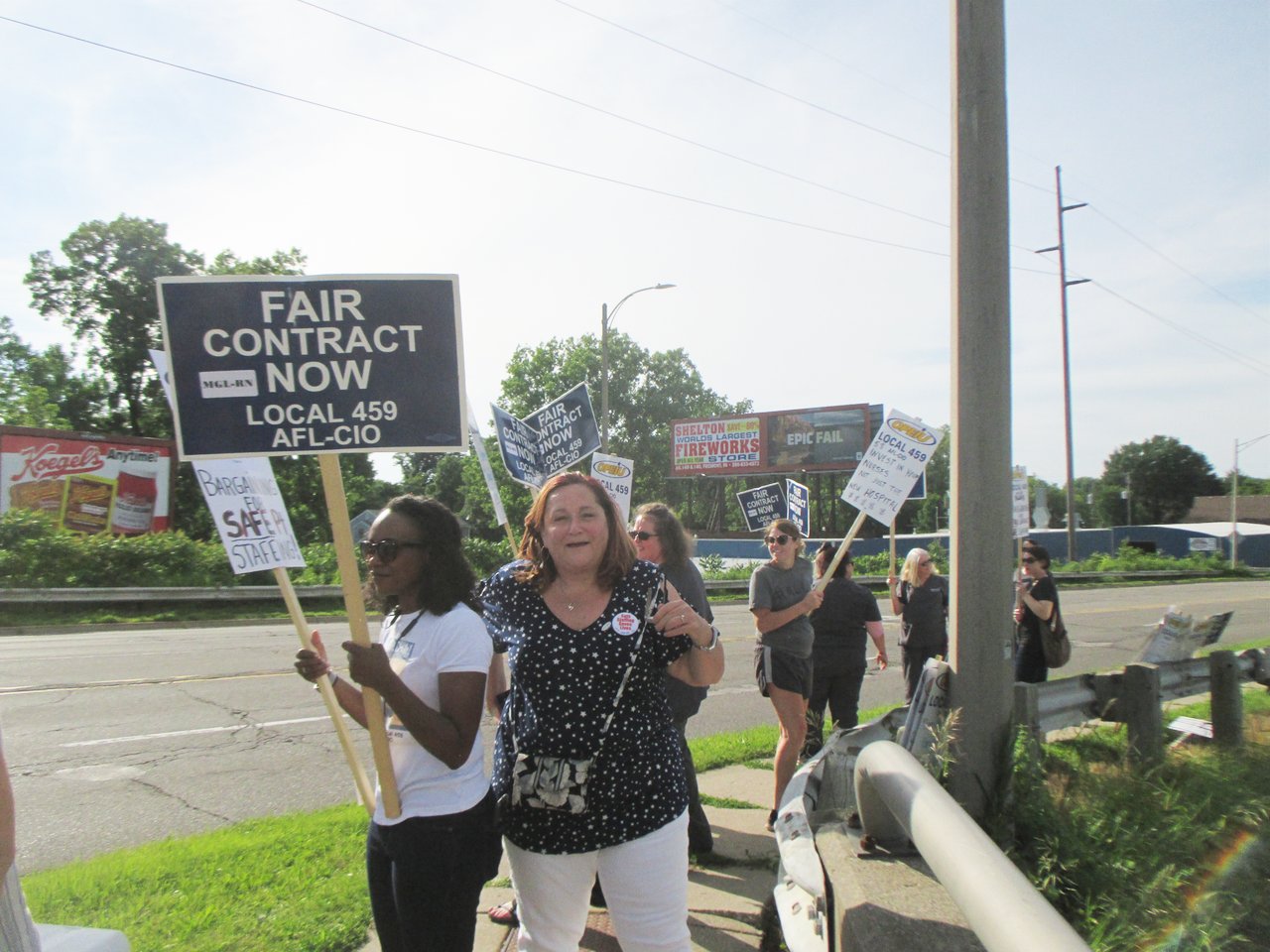 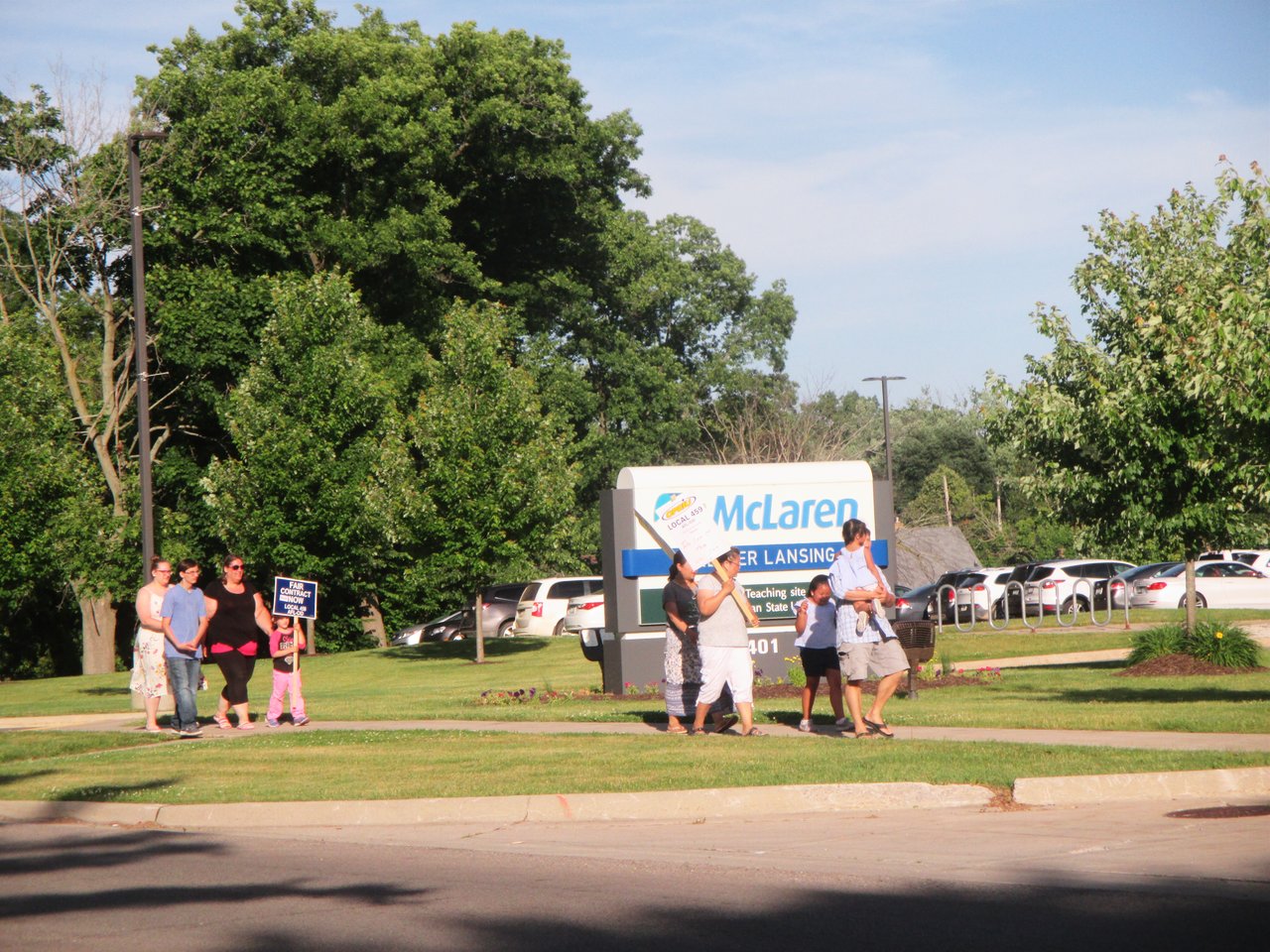 Nurses and their families march outside McLaren hospital on Greenlawn Avenue to draw attention to their lack of contract, short staffing and long hours.
Chris Gray 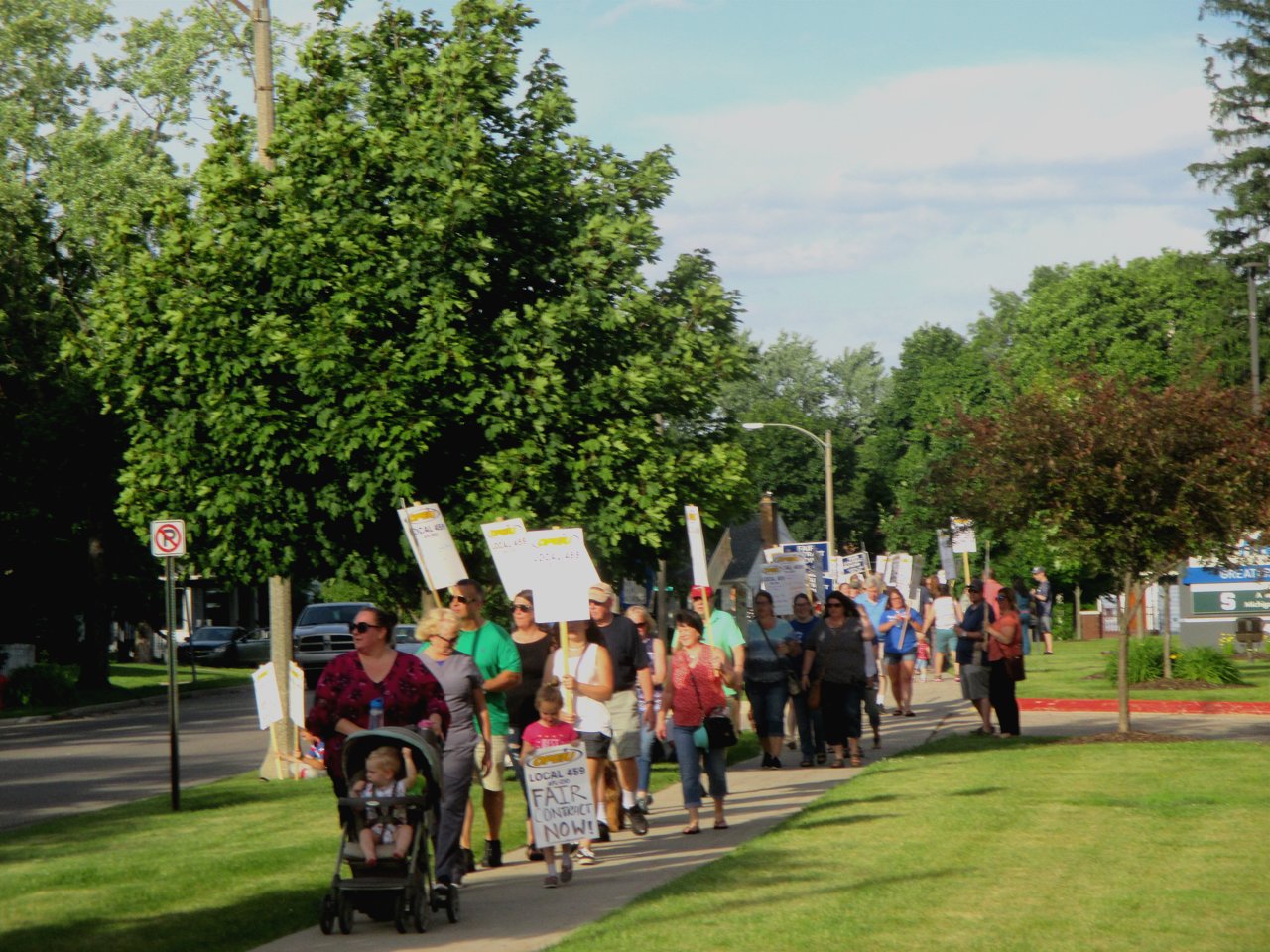 THURSDAY, June 27 — The nurses could be heard yesterday at the top of the hill from McLaren Orthopedic Hospital, from the sound of passing cars blaring their horns on Pennsylvania Avenue.

About 20 nurses rallied with picket signs at the smaller McLaren speciality hospital and another 100 crowded the sidewalk on Greenlawn Avenue in front of the larger hospital a mile and a half away.

The picket was not a strike but a reminder to the community that they’ve been working without a contract for almost a year. Their representatives say not enough nurses are staffed at any one time and the ones that are working are being forced to pull too much overtime.

While they’re on-board with three 12-hour shifts a week, many of the nurses are being told to come in on their days off or pull 16-hour days.

“Studies show that after 10 hours, your cognitive skills are compromised,” said Julie Murray, a registered nurse and the chief union steward for the Office & Professional Employees International Union Local 459. Her union represents about 1100 hospital workers, including 460 nurses. “The nurses are just plain tired, and they don’t have time to spend with their families.”

In addition to the conflict over staffing hours, the tiny 1% to 2% annual raises they’re being offered will not cover the cost of a new healthcare package where the nurses will have to shoulder a deductible and copayments to use the services at McLaren and other healthcare providers as patients.

In a statement, hospital officials said: “McLaren is committed to working with the union to reach a fair and competitive contract for the nurses.”

McLaren CEO and President Philip Incarnati is one of the top-ten highest paid executives of any nonprofit hospital system in the country, raking in just shy of $7 million a year, according to Becker’s Hospital Review. In 2015, City Pulse reported that Incarnati made 180 times as much money as his average worker.

The McLaren nurses struck for three weeks in 2005 to win assurances that a certain number of nurses would be staffed at all times based on the number of patients. But as hospitals have  worked to shorten stays for patients, the ones who remain concentrated at hospitals need greater care than the average patient 14 years ago.

Union officials said they have no intention of striking this time, but they are trying to avoid the impasse of their last contract negotiations, where they went three years without an agreement before reaching a deal in 2015. “A strike is difficult on the nurses and the hospital and the community,” said Sharon Taylor, president of OPEIU Local 459.

The goal of the picket is to inform the greater Lansing community that the people who take care of their loved ones have been working without a contract since September and have not yet been offered a deal they think is fair. With public pressure, they believe McLaren will come to the table with a deal they can agree upon.

Last year, McLaren broke ground on a new hospital near Michigan State University that will consolidate operations for the two aging facilities on Lansing’s south side. The new hospital should be ready in 2021.

Union Representative Jeffrey Fleming was quick to embrace the new hospital project but said the hospital had labor needs to meet as well. “Half a billion for a new hospital is a great investment but they also need to invest in the people who provide the care,” he said.

This story has been updated.