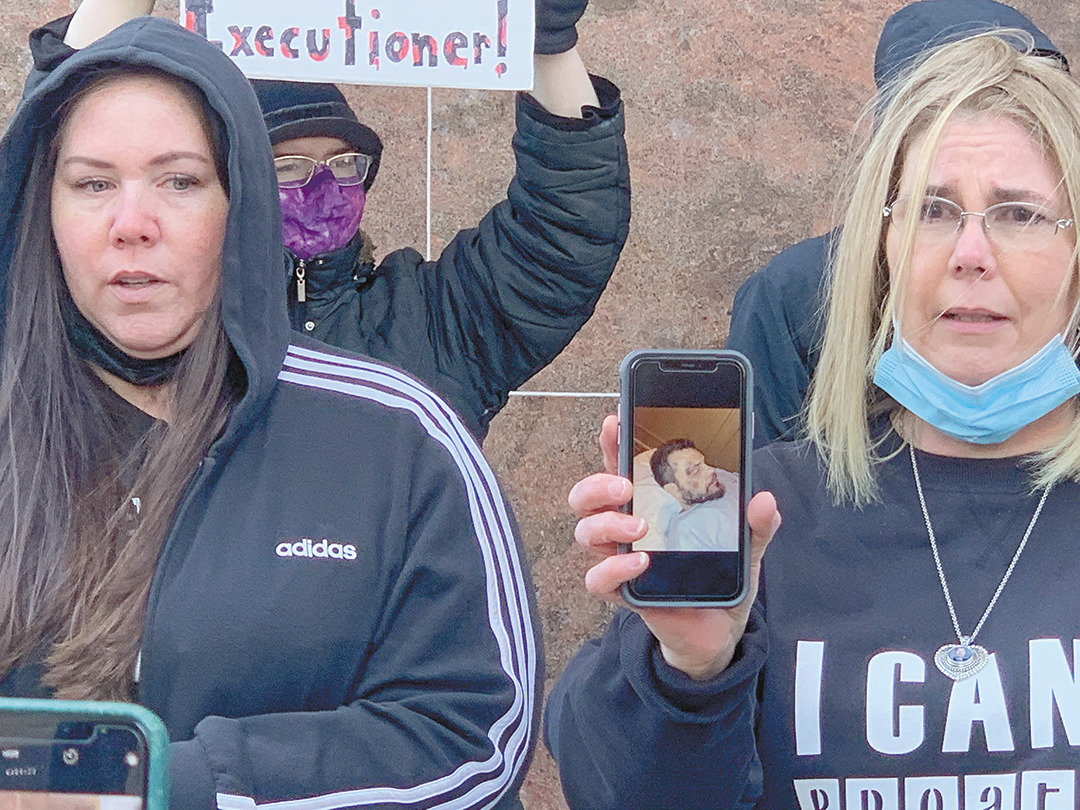 Two of Anthony Hulon’s sisters, among other family members and friends, joined a demonstration at the Lansing Police Department on Friday. One showed an image of Hulon’s bruised face after his violent death beneath Lansing City Hall last April.
Kyle Kaminski/City Pulse
Posted Thursday, March 4, 2021 12:15 am
KYLE KAMINSKI

Nearly one year has passed since Anthony Hulon was choked to death by four police officers beneath Lansing City Hall. And 10 floors up, Mayor Andy Schor is still keeping quiet amid a lawsuit and possible criminal charges against his police officers.

Video footage released by attorneys late last year shows Hulon, 54, of Lansing, being escorted by four Lansing Police Department officers into a small cell at the city’s lockup below City Hall at about 1:04 a.m. April 11, 2020. After a brief struggle with officers, Hulon was pronounced dead about an hour later.

Over the last several months, family and friends of Hulon — as well as local news outlets — said they have only been stonewalled by Schor’s administration in their search for details about the incident. Schor and Police Chief Daryl Green have refused to release videos, reports or sit down for interviews on the topic.

Medical reports list Hulon’s cause of death as a homicide — specifically by asphyxiation. Video footage shows four officers taking turns pinning Hulon to the ground inside his cell as he repeatedly shouts his last words: “I can’t breathe.”

But Schor’s administration is staying silent as the case remains under review by Attorney General Dana Nessel’s office, which could decide whether the cops — who have since returned to work — will face criminal charges for Hulon’s death.

A spokeswoman for Nessel’s office told City Pulse this week that a criminal investigation into the incident, which has spanned at least the last four months, is expected to wrap up this month — with “something” expected by March 31.

In the meantime, all four officers involved are still working in the lockup. And while unrest continues to build over unanswered questions, Schor and his administration are erring on the side of legal caution rather than transparency.

“You know we can’t comment on active litigation,” a city spokeswoman said, referring City Pulse to a statement released last year after the lawsuit was filed.

A protest formed at the Lansing Police Department on Friday afternoon, organized in part by the Metro Lansing Poor People’s Campaign and Hulon’s sister, Heather Hulon, who broke into tears while demanding justice be served.

“It shouldn’t have happened. He came in here on a Friday, and he should’ve been able to walk out on a Monday,” Heather Hulon said. “They need to be held accountable. They need to be fired. They need to have charges brought against them. If there are no consequences for their crimes, they’ll continue to do them.”

Several people brought megaphones and signs to the rally with phrases like “Justice 4 Anthony” and “LPD murdered Anthony Hulon,” as well as a boombox that blasted songs like “Fuck the Police” for a few hours on Friday afternoon.

“Something needs to change. People need to wake up. We need to fight, and we need to fight together to get the laws changed,” Heather Hulon said. “We can’t get answers. I should be grieving for my brother. I shouldn’t be playing detective.”

Green initially said the police officers involved were placed on a paid leave during an internal investigation. The city, however, maintains no record of an internal probe. Instead, officials passed the case to the Michigan State Police for Nessel’s office to decide whether the officers will face charges. Those police officers are back on the job.

Department policies call for cops to remain on leave until the review for potential criminal charges is complete. It’s unclear why they were put back on duty before that external investigation finished. Schor and Green won’t answer questions.

Those policies also encourage transparency, including a public release of information. The city only notified the public that Hulon died from ambiguous “medical complications” in a press release last year. It also failed to mention that officers were involved in Hulon’s death at all, much less as the direct cause of it.

The Police Department also crossed its own internal policies by failing to release the names of the deceased or the officers involved. Those details — as well as videos and police reports — were only made available through Hulon’s attorneys.

“They will be held accountable for the murder in their jail last year,” said Tobias Webb, a representative of the Poor People’s Campaign, on Friday afternoon. “We have the whole street filled up with cars, just trying to build accountability and to demand justice. There is just no trust with the police in Lansing anymore.”

A longstanding records request for emails between city officials about Hulon’s death was filed last year by City Pulse and was ignored by the City Attorney’s Office until this week. The response is also heavily redacted, in part because the emails included information shielded under claims of attorney-client privilege.

In response to a notification about Hulon’s death, diversity consultant Teresa Bingman wrote back to Green, pledging her support to the Police Department.

“No weapon formed against you shall prosper,” she responded to Green’s email.

“I just want to let you know that we all hear you on the Council. We see you. We hear you. We’re following very closely, and we hope that you get answers and that justice is served, however that may be,” Jackson announced. “I hope justice is served. And never give up looking for the answers that you’re looking for.”

A 30-page complaint filed last year in the Western District of Michigan alleges that the officers involved not only wrongfully killed Hulon, but “conspired to distort and conceal the actual facts and circumstances regarding his death.” It also alleges that cops failed to give adequate and timely lifesaving measures in jail.

Video footage also shows that the four officers involved had repeatedly ignored automated defibrillator alerts designed to notify them to give rescue breaths after several failed attempts at CPR. Green won’t speak publicly about those policies.

Instead, a mayoral spokeswoman responded to questions with a dated statement from Schor and Green that states “Mayor Schor has no further comment.” It also expressed Schor’s willingness to close the lockup “as soon as there is a feasible option.” Those plans haven’t publicly evolved at all over the last several months.

The fatal risk of prolonged restraint, however, is something cops have been alerted to nationwide — particularly following George Floyd’s killing in Minneapolis last year, two months after Hulon was killed. Like Hulon, Floyd’s death certificate also listed “positional asphyxia” as the cause of his death.

Schor posted to Facebook before the circumstances of Hulon’s death were made public, then expressing support for Minneapolis Mayor Jacob Frey’s decision to fire the officers involved and to formally charge them criminally for Floyd’s death.

“May justice be served for the family, friends and community,” Schor wrote.

Green also told City Pulse more than a month after Hulon’s death that he didn’t think George Floyd would have died in Lansing. Local officers would know better, he explained — entirely failing to mention that Hulon died a similar death in April.

Many local activists, including Councilman Brandon Betz, former Mayor Virg Bernero and several others tied to the Black Lives Matter movement have since billed the lack of transparency in Schor’s administration — among other leadership issues — as reason enough for the mayor to immediately resign.

“It has been months, almost a year, of digging, playing detective and trying to find these answers for ourselves with no help from the city at all,” Heather Hulon said. “We are on our own. His life mattered to us, his family and his friends who loved him. These police officers need to be held accountable for what they’ve done.”

Court records show the wrongful death litigation filed against the city is in mediation with no public hearings scheduled in the near future. Check back with lansingcitypulse.com for continued coverage as the situation develops.