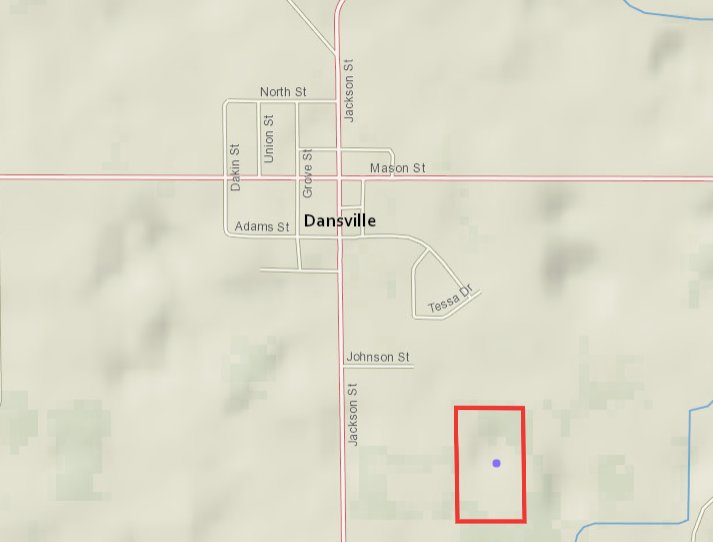 A 23-acre parcel of village-owned land southeast of Dansville was sold for $34,500 over the summer.
Courtesy
Posted Wednesday, January 12, 2022 6:00 pm
Kyle Kaminski

WEDNESDAY, Jan. 12 — Some Dansville residents have raised ethical concerns after the Village Council voted over the summer to quietly sell a parcel of village-owned land to a village official without ever having appraised the property, collected bids or even publicly posted it for sale.

Meeting minutes show that the Dansville Village Council voted unanimously in July to sell 23 acres of vacant agricultural land to Village Treasurer Kelen Gailey for $34,500. Village President Mike Stolz said that the land was never listed for sale and that bids were never collected. He also confirmed that the village never had the land appraised to determine a fair market value.

Still, the Council voted unanimously to sell the land without much discussion, Stolz said. And despite raising eyebrows over the lack of public notice, he insisted taxpayers got a fair shake.

“I guess the Council felt it was a good deal because they voted on it,” Stolz said. “Do I see any type of conflict with the process that went through our legal advice? No. I see no conflict here.”

Stolz said the landlocked property — which is essentially a vacant field — had been owned by the village since 1975. It was sold, in part, because it served no purpose for the village, he said. And because the village has no ordinances or formal written policies or procedures for selling taxpayer-owned property, Stolz said he was comfortable with the private nature of the sale. He also said that an attorney contracted by the village had approved of the legality of the maneuver.

An attorney representing the village called City Pulse, presumably to defend the legality of the property sale, though he refused to provide any statements or answer questions on the record.

Several amendments to the state’s General Law Village Act in 1998 laid out the methods in which villages (like Dansville) can sell its property — either publicly or privately. The term “public sale” is not defined in the act, but has been found to be synonymous with “public auction,” the Michigan Supreme Court has held. The Michigan Municipal League has also published a bulletin on municipal land sales that offers guidance to villages on how to properly sell property.

Federal court decisions cited in that one-pager noted that the Michigan attorney general has defined  a public sale of village property as one that “all persons shall have the right to come in and bid” and “that notice shall be given publicly at which all bids are invited.” The Municipal League has also published draft ordinances that require certain transparent procedures for real estate deals — including requirements for public notices, proper appraisals and a full review of sealed bids.

In 1974, it also became possible to sell village-owned real estate at a private sale “if pursuant to an ordinance. Amendments shifted that section to allow them “if authorized by an ordinance.” Dansville doesn’t publish its local ordinances online, but Stolz insists that no such ordinance exists. He also noted that he “can’t agree or disagree” on whether the sale was a legal one.

But since there is no ordinance regarding village property sales in Dansville, Stolz maintains that the village should be free to sell off its land in whatever fashion the Council deems fit — regardless of whether there’s an appearance of conflicting interests involving village staff.

Village Councilman Gary Barth declined to comment, except to note that he also thought the sale represented a “good deal” for village residents. Councilwoman Karen Ceccanese said she was comfortable with the sale because there were few other uses for the landlocked parcel and Gailey was the only person to have expressed any interest in buying the plot from the village.

“It just wasn’t being used. Our president was in favor of it, so we voted for it,” she explained.

Councilwoman Jane Kirby told City Pulse that she couldn’t explain exactly why she voted for the sale over the summer, only noting: “If I had known what I was doing, I wouldn’t have done it.”

Village meeting minutes don’t elaborate on exactly what Gailey intends to do with the property, though nobody in the village of Dansville, including Gailey, lives more than a mile from the land.

Former City Council President Carole Colburn, however, said that the private nature of the sale is “far from” standard municipal procedure — even for a small village like Dansville. She recalled two other property sales since 1998 that both involved notices, listings, appraisals and bidding.

“We always made sure people were informed. These properties were always appraised. They were always posted. It’s common sense,” she said. “This is definitely not the usual procedure.”

Without an actual appraisal, determining the fair market value of the parcel is challenging, she said. Property listings in the area this week showed a much smaller, three-acre agricultural lot available for $26,000. Another nearby three-acre lot, though not landlocked, was listed for $49,500 — or about $16,500 per acre, 10 times pricier than Gailey’s rate of $1,500 per acre.

Colburn took concerns about the property sale to Attorney General Dana Nessel in early August, according to emails provided to City Pulse this week by a spokeswoman for Nessel’s office.

“Is it legal to sell property this way? If it is indeed illegal, what can be done about it?” she asked.

Division Chief Jessica McGivney replied in December, though without any legal determinations. She noted that the AG’s office is prohibited from providing specific legal advice to private citizens and noted that Nessel does not supervise local units of government or their land sales.

“If you have evidence of a crime that has been committed, you may submit that evidence to the county sheriff or the county where you believe the criminal activity occurred,” McGivney wrote, noting that concerns about municipal spending can also be reported to the state Department of Treasury, which may refer the findings of any resulting audits for possible criminal prosecution.

In response to City Pulse, Nessel’s office again declined to weigh in on the legality of the sale.

“This department does not supervise local units of government and therefore it would not be appropriate to weigh in on local governing conduct,” a spokeswoman said, also deferring to the Michigan Municipal League for more details on what is considered “appropriate conduct.”

Colburn said she never filed a police report. Calls to a spokesman for the Michigan Municipal League, of which the village of Dansville is listed a member, were not returned for this story.