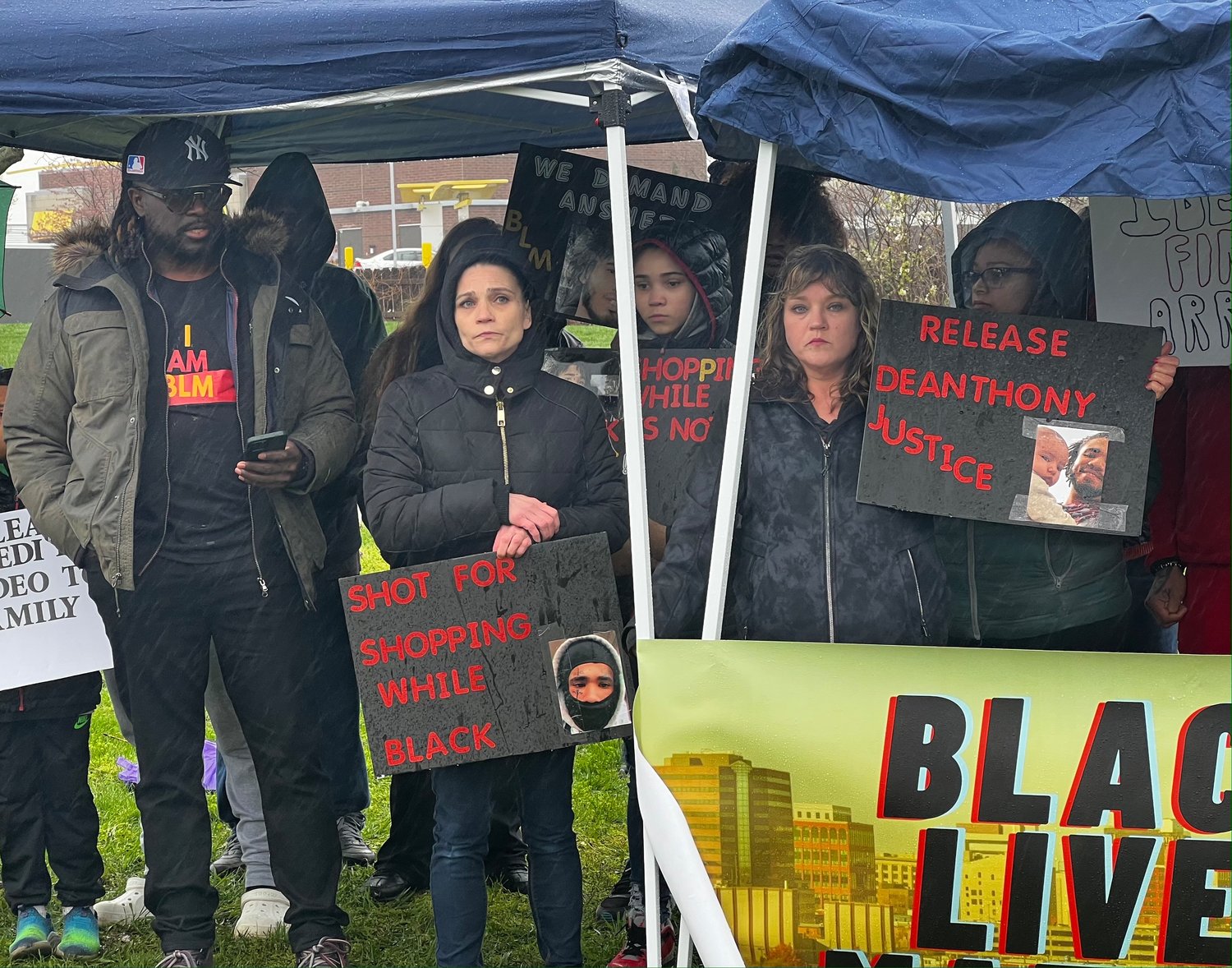 DeAnthony VanAtten’s mother, Burnette VanAtten (second from the left) joined a Black Lives Matter protest at the Ingham County Jail to demand that both officers who shot her son be fired.
City Pulse/Kyle Kaminski 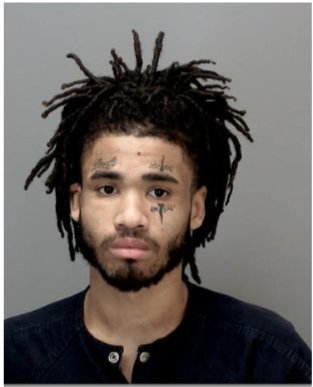 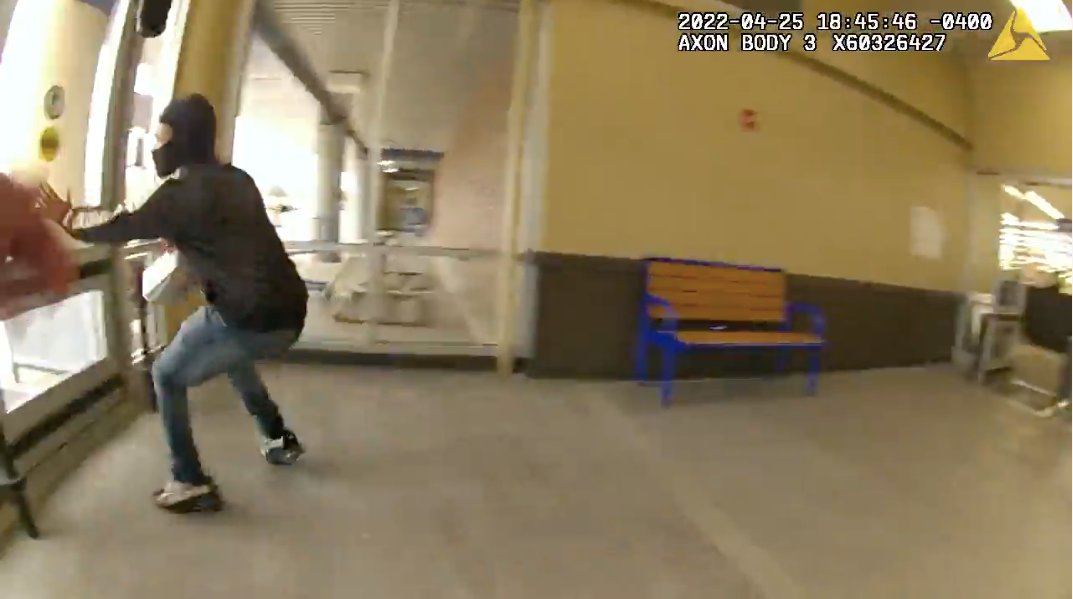 Body camera footage shows VanAtten running away from an officer near the front entrance.
Courtesy 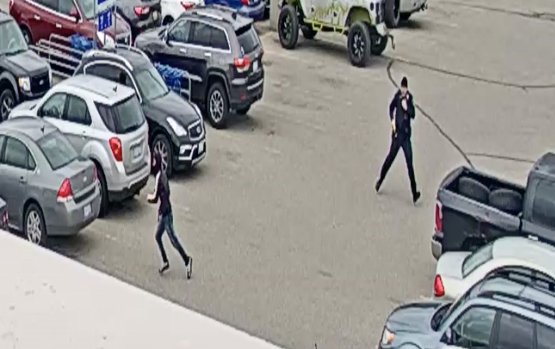 Surveillance footage shows VanAtten with a small, unidentifiable object in his hand.
Courtesy 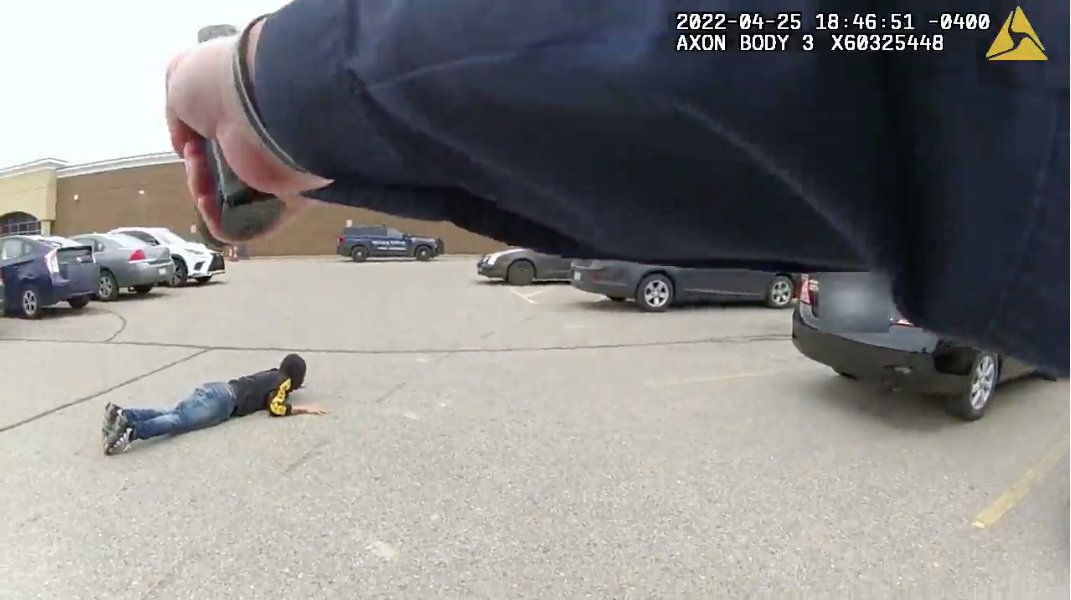 Body camera footage shows VanAtten collapsed on the pavement after being shot by officers.
Courtesy 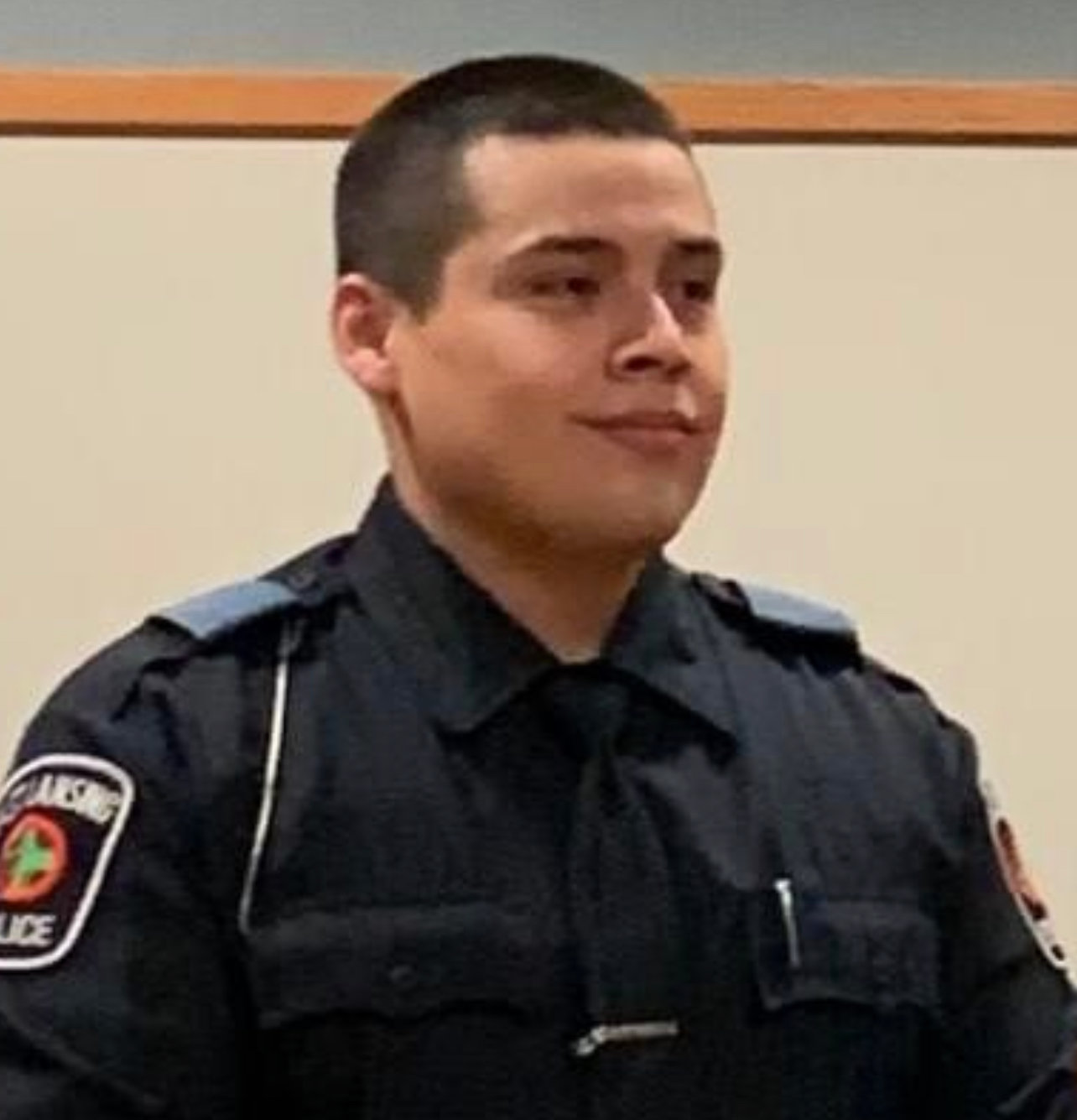 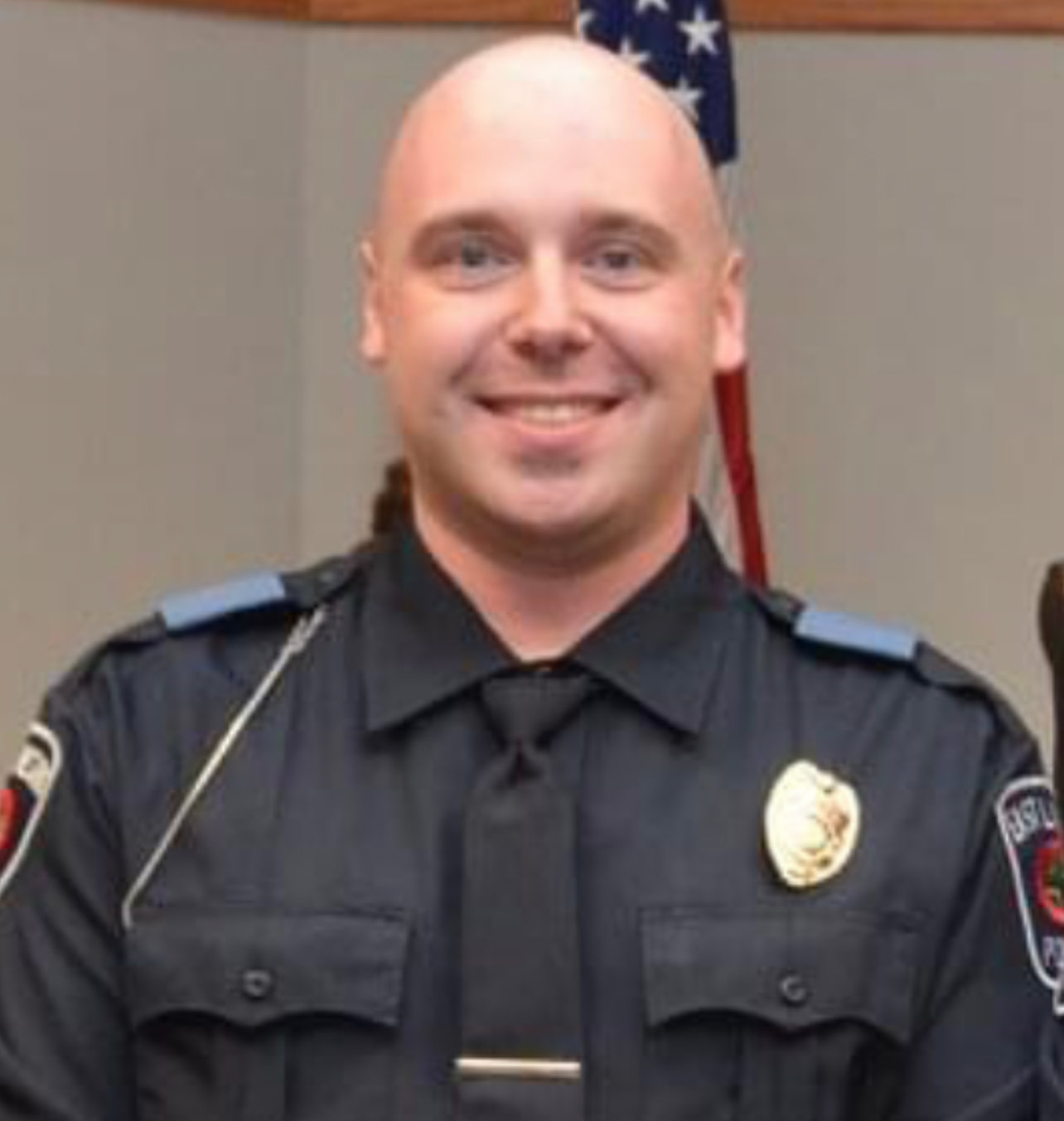 Two rookie officers at the East Lansing Police Department are on paid leave after they shot eight rounds at a 20-year-old Lansing man who was reportedly seen with a pistol while he fled authorities in the parking lot of the Lake Lansing Road Meijer in East Lansing on April 25.

Records released this week by the East Lansing Independent Police Oversight Commission identified officers Jose Viera and Jim Menser as the two cops who shot and injured DeAnthony Thomas-Scott VanAtten, a Black man who was seen on video running away from four ELPD officers who responded to the grocery store in response to a still-unreleased 911 call.

This week, VanAtten is reportedly recovering from two bullet wounds at home while his mother is joining forces with local activists to demand “justice” in the wake of another controversial police shooting of a Black man in Michigan — this time in East Lansing. Among his family’s top demands: Fire both Viera and Menser, and prosecute them for their roles in her son’s shooting.

Meanwhile, Viera’s attorney is arguing that the cops will soon be “cleared” of all wrongdoing, and VanAtten has since been released from custody and has not been charged with a crime.

Many details are still scarce while the State Police investigates and decides whether to request criminal charges against VanAtten, Viera or Menser — or perhaps all three. The case will be referred to Michigan Attorney General Dana Nessel’s office for a final decision. East Lansing Police Chief Kim Johnson has also vowed to review all of his department’s relevant policies to help turn the city’s first officer-involved shooting into a learning experience for law enforcement.

In the meantime, here’s everything we know — and some lingering questions that remain:

VanAtten parked a silver Chevy Equinox at Meijer at 6:34 p.m. Security footage showed him exit an SUV wearing a black ski mask and sprint through the parking lot toward the store before he returns to the vehicle, reaches inside and then runs back toward the western grocery entrance.

Two minutes later, an unidentified woman called 911 to report that she had just seen a masked Black man pocket a gun from his SUV and head inside Meijer. Ingham County dispatchers relayed the message (and VanAtten’s description) to officers as a “weapons complaint,” also noting: “He’s not threatening anybody with it.” Audio of the original call has not been released.

The first two officers arrived on scene at 6:43 p.m. and went inside to look for a suspect. At least two other officers were close behind, still in the parking lot. At a press conference last week, Johnson declined to specify why four separate officers were called to the store that evening or elaborate on what specific sort of criminal behavior may have been under investigation there.

Within one minute of entering the west entrance, one of the first two officers on the scene looked across the checkout lanes and appeared to spot VanAtten near the eastern entrance. Both of the cops can be seen running in body camera footage, presumably toward VanAtten.

Interior security footage of VanAtten and two officers entering the store exists, but it hasn’t been publicly released. City officials ignored a request from City Pulse this week for an explanation. The Police Oversight Commission has requested that footage be released by Friday (May 13.)

Before the two officers inside could catch up, VanAtten appeared to dart out the east entrance.

The only footage of VanAtten inside the store (via body camera) shows a third officer pointing a stun gun at him in the small lobby area between the automatic doors. That cop also gave VanAtten the first audible verbal command of the day: “Hey, let me see your fucking hands.”

With a plastic shopping bag in his right hand, VanAtten ignored the directive and pushed open the front door with his empty left hand before sprinting west through the crowded parking lot.

Both Viera and Menser can be heard telling him to stop and threatening to shoot him with a stun gun while chasing him across the parking lot. ELPD Officer Jeff Horn was also identified as another officer who displayed his weapon at the scene. A fourth officer has not been identified.

“Get on the ground. Get on the fucking ground. You’re going to get tased,” one cop shouted.

About a minute into the pursuit, one officer — still running several yards ahead of the others — can be heard on tape claiming to have seen VanAtten pull out a pistol as he turned back east.

A simultaneous “shots fired” call was reported over the radio to dispatchers at 6:46 p.m.

Because of the chest line positioning of the officer’s body camera, VanAtten was not visible on the body camera footage when the first two shots were fired. Parking lot surveillance footage showed a small metallic object in VanAtten’s hand, but it’s not readily identifiable as a gun.

After being alerted to the presence of a gun, a second officer who was still following close behind took cover behind a nearby vehicle, steadied his aim and then fired six more shots at VanAtten — who appeared to be unarmed — as he made his way into the officer’s sightline.

After being shot, VanAtten stumbled and fell to the ground. He shouted: “I can’t breathe.” His girlfriend was also seen on video frantically screaming at officers with their 8-month-old child in tow. Her most repeated phrase of the evening: “You just shot him for no fucking reason.”

After cuffing VanAtten, the officers quickly shifted their abrasive tone, repeatedly calling him “buddy” while they patched up his wounds. One officer used his belt as a tourniquet while the others started searching the scene for the gun that was reportedly seen in VanAtten’s hand.

All told, VanAtten was shot twice — once in the abdomen and once in the right leg. It’s unclear which of the eight shots from either Viera or Menser made contact, or where exactly the other six bullets may have landed in the parking lot. No additional injuries were reported at the scene.

About two minutes later, one of the officers can be seen retrieving a gun from beneath a nearby parked car where VanAtten was also seen crouching on video footage during the pursuit. The East Lansing Fire Department arrived at 6:52 p.m. to take VanAtten to Sparrow Hospital.

While at the hospital, the State Police decided to detain VanAtten on an unrelated probation violation warrant tied to an outstanding Ingham County criminal case, county prosecutors said. A spokesman for the State Police has declined to answer questions about the situation.

Because of VanAtten’s age, the Holmes Youthful Trainee Act ensures that portions of his criminal record will remain sealed indefinitely from public view — including the details and circumstances surrounding his latest detainment at the county jail, county officials explained.

Individuals licensed to carry concealed pistols in Michigan are only legally prohibited from carrying them in certain locations. Grocery stores like Meijer are not on that list of “prohibited premises.” Private property owners can still prohibit firearms from being carried on their premises regardless of whether the weapon is concealed. Violators can face trespass charges.

County Sheriff Scott Wriggelsworth said his deputies “took over guard” of VanAtten at Sparrow Hospital on April 28 after being notified of his unrelated probation violation. No records of that probation violation exist in public court records. The Michigan State Police also indicated that VanAtten was out on bond on another unrelated and sealed criminal case during the shooting.

VanAtten was “medically cleared” to leave the hospital and taken to the county jail at 11:37 a.m. on May 2 — almost one full week after he was shot by the cops. He was arraigned on his unrelated probation violation on May 4 and released later that afternoon, Wriggelsworth said.

The Michigan State Police have not released additional information about the incident. Most local elected officials are keeping their personal opinions to themselves as the probe continues.

The East Lansing Police Oversight Commission spent about three hours on Monday crafting a series of questions for city officials and the Michigan State Police regarding the shooting and the subsequent investigatory process. Many answers are due back before the end of the month.

Visit cityofeastlansing.com/videorelease to watch the publicly released video footage. Those experiencing trauma related to the incident can access mental health resources by calling 211.