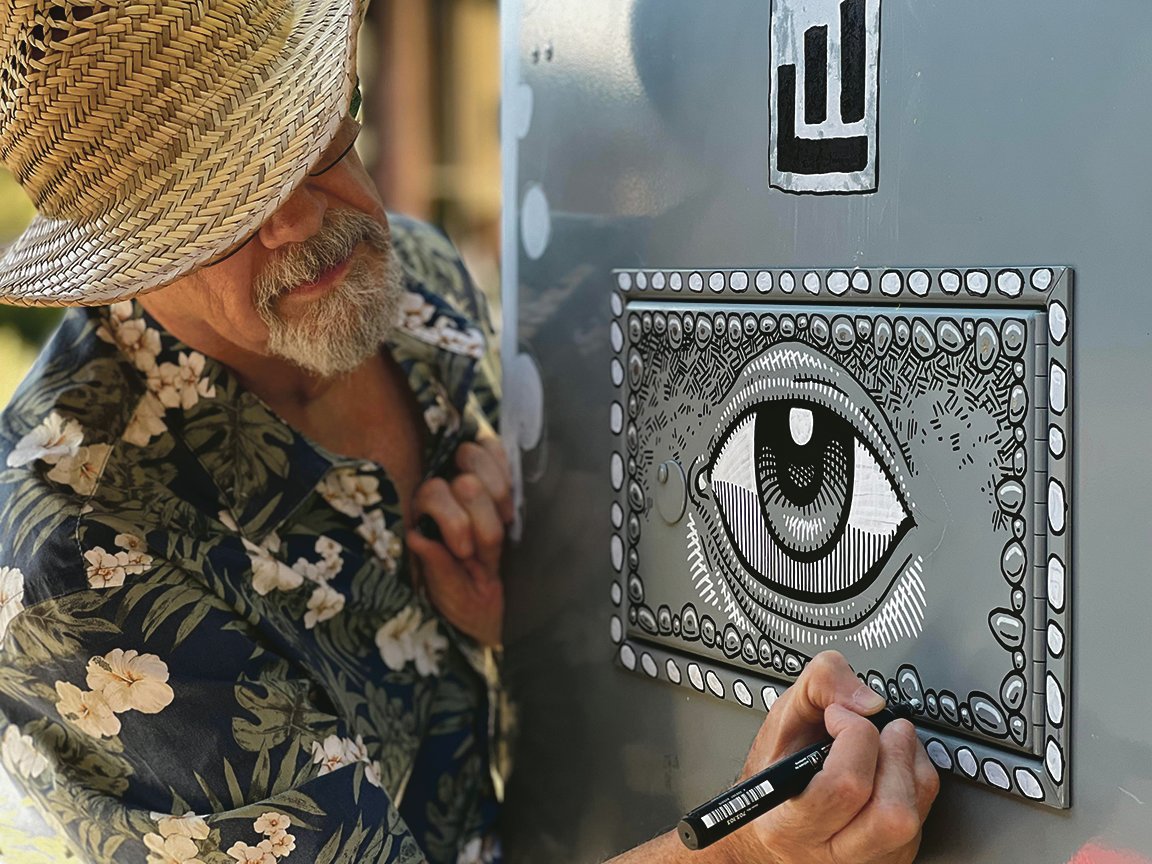 Dennis Preston collaborated with Marcus Cottom and Paul Vetne on a traffic box across from the Capitol. Preston said the project allowed him to “let loose.”
Courtesy 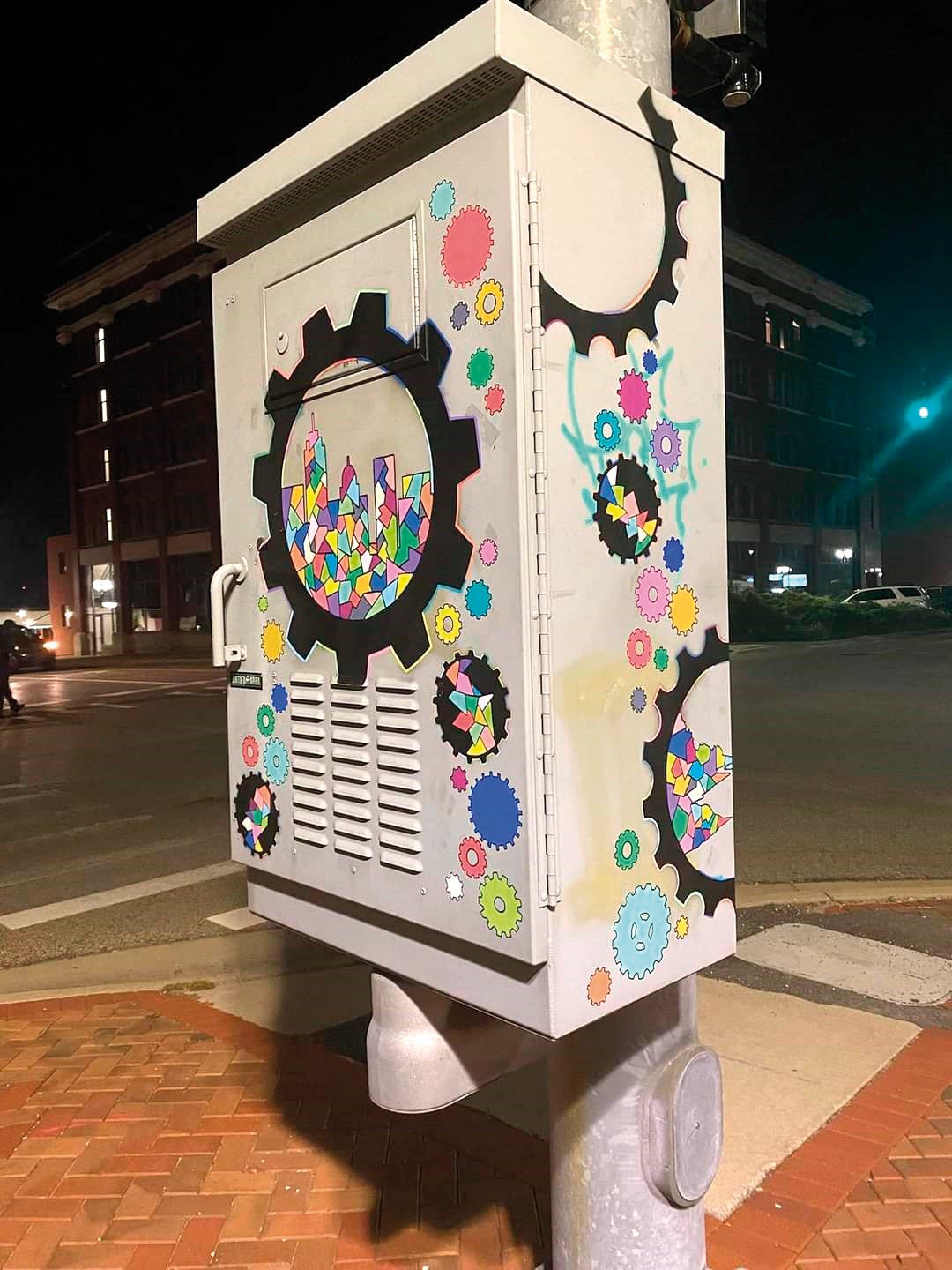 Chances are, most have never looked twice at a nondescript traffic signal control box, but thanks to imaginative artists, locals are now doing double-takes at intersections.

More than 20 Greater Lansing area artists have given these previously blank, gray “canvases” across the downtown corridor a colorful makeover.

The project was a vision of the Design and Public Spaces Committee for Downtown Lansing Inc., formerly headed by the late Brandon Navin of the Artist’s Umbrella.

Julie Reinhardt, DLI director of community development, and Bob Rose developed the concept and implemented the project. Rose, an advocate, artist and volunteer, said he enjoys and champions creating art in a public setting.

While some of the artists were recruited, Rose said others asked to help makeover the 12 traffic boxes. Each spot alongside Washington Square and Grand and Capitol avenues saw two to three artists participating, some collaborating for the first time.

Rose, Genevieve Richardson, Susan Krans, Stephanie Vasko and Michelle Gregory worked together to create a mini-gallery of sorts with the boxes. The loose theme was “love letters to Lansing,” an effort to develop a welcoming and vibrant atmosphere in Lansing. “This project is touching everyone who visits, works, or lives downtown. That’s a lot of folks seeing works of art daily,” Rose said.

For help on the mission, Rose said he contacted local illustrator, caricaturist and musician Dennis Preston, who was instrumental in spreading the word of the project to other artists in the Lansing community. Preston spent a few weeks working alongside fellow artists Paul Vetne and Marcus Cottom on their box in front of City Hall.

“Our styles are similar,” Preston said. “We all know each other, have drawn together before, and even had joint shows at art galleries. We were the ones chosen to spearhead the project and to have our art showcased on the box across from the Capitol building.”

Although Preston has worked on public art projects before, including murals inside long-defunct retail shops like Sounds & Diversions and Free Spirit back in the ’60s and ’70s, he’s always happy to see Lansing getting more art. “There’s room for it,” he said. “Some of the murals that have gone up over the last few years are amazing.”

Preston said the project was a lot of work but also fun. He could “let loose with something” on the box — such as an eyeball, robot head and Lansing logos.

"There was some confusion, but it has all been resolved,” Reinhardt said. “The artist community came out in droves to participate in this project. Word spread like wildfire,” particularly because Preston was involved. “It happened so quickly a few of the normal approval processes required by the city were skipped.  Downtown Lansing Inc. has since worked with the city to rectify this and, while the proper steps should and will be followed in the future, the city is thrilled that so many amazing artists have beautified our Downtown.”

After local artist Sarah Hillman heard about the project from Preston, she partnered up with her sister, Rebecca-Lynn Douglas, and worked once a week for the past three weeks to complete their box on the corner of Washington Square and Kalamazoo, near Strange Matter Coffee and Thai Village.

Hillman said there were not a lot of restrictions or rules for the project — just keep it positive. Nothing political or derogatory.

“We were just encouraged to make it eye-catching, uplifting and interesting,” said Hillman, who along with her sister, put silhouettes of different parts of the city into gears. The work was inspired by Douglas’s tattoo honoring her REO Town neighborhood.

“We were standing at the box talking about making the silhouettes pop and noticed the tire cover on the back of her car,” Hillman recalled. “Rebecca is a giant dinosaur nerd and has this super colorful geometric graphic of dinosaurs on her tire cover, which sparked the idea for something geometric and colorful.

“The stained-glass look was a natural evolution of that,” she added. “And, as one guy pointed out to us last week, it's reminiscent of peace, which is something everyone wants for their city.”

Hillman said locals passing by were overwhelmingly supportive and inspiring. “People yell encouraging things from their cars as they drive by or stop at the light right there,” she said. “Sometimes people walk up to see what we’re doing and give their opinions on the work.”

Getting these works created was a true passion project not only for  organizers but also for the creators. The artists essentially volunteered their time and talent for the project.

“We aren’t being paid for this,” Hillman said. “Downtown Lansing Inc. has said they will refund artists up to $100 for supplies, as long as we provide receipts for our purchases. I'm really grateful for this because Posca Pens aren’t cheap. I blew almost the entire $100 budget on Posca Pens alone at Odd Nodd Art Supply in Old Town.”

“I don’t mind the idea of sometimes giving some of my time and effort to make the place where I live better,” she added. “It’s a way to give something back to your community and has the added benefit of being enjoyable to do — never a bad combo. Anything that makes the place we live more beautiful, more colorful or more interesting is a good thing. The fact that so many of them are done by local artists and as collaborative projects makes it even more wonderful.”