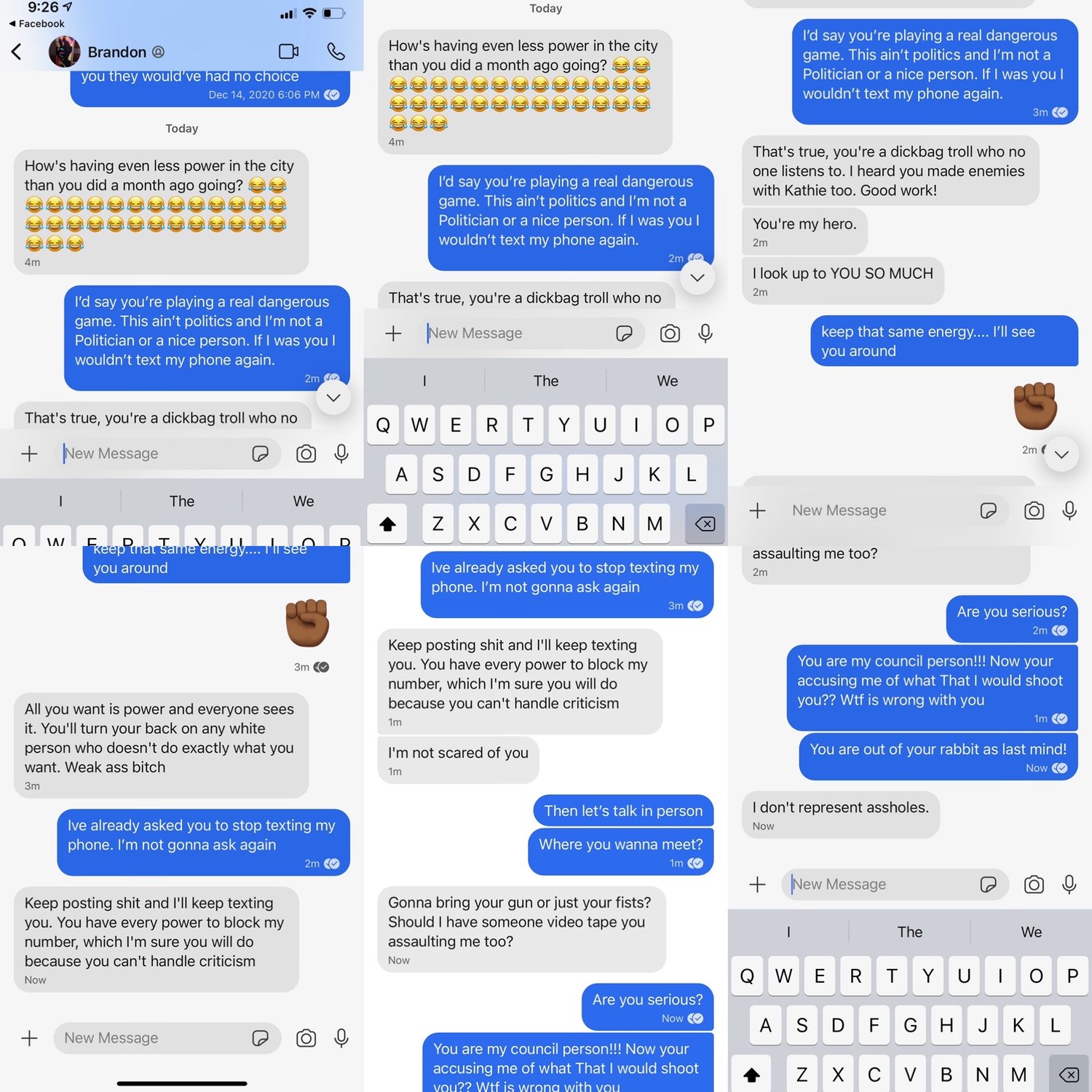 THURSDAY, Feb. 4 — A series of profane text messages from a Lansing City Councilman show that he goaded a Black activist into an argument, calling him a “weak ass bitch” and a “dickbag troll.”

First Ward Councilman Brandon Betz sent messages via Facebook to firefighter and activist Michael Lynn Jr. last night after Mayor Andy Schor’s annual State of the City address, according to screenshots of the conversation shared and verified with City Pulse.

“How’s having even less power in the city than you did a month ago going,” Betz asked Lynn.

Betz this month backed away from pursuing a vote of no confidence against Schor. His initial text to Lynn was a jab that implied Lynn had lost support amid a yearlong campaign against the mayor in which both Lynn and Betz have repeatedly called for Schor to resign, Lynn explained.

“I’d say you’re playing a real dangerous game. This ain’t politics and I’m not a politician or a nice person,” Lynn wrote back to Betz in response. “If I was you, I wouldn’t text my phone again.”

But Betz didn’t stop. Screenshots show Betz continued to belittle Lynn — calling him a “dickbag troll who no one listens to” as well as a “weak ass bitch” who only wanted more political clout.

“All you want is power and everyone sees it. You’ll turn your back on any white person who doesn’t do exactly what you want. Weak ass bitch,” Betz wrote. “I’m not scared of you.”

Lynn suggested that he and Betz meet to “talk” in person. Betz then replied to Lynn: “Gonna bring your gun or just your fists? Should I have someone video tape you assaulting me too?”

“I don’t represent assholes,” Betz wrote at the end of the text message exchange.

Betz — once a vocal critic of Schor — has changed his tune in recent weeks, especially after he joined him and Council President Peter Spadafore in cutting the line for their COVID-19 shots.

In response to that incident, Lynn labeled Betz as “useless” and urged him to resign this week.

Betz also applauded Schor Wednesday for the “tone and tenor” of his speech. And while the two “remain diametrically opposed on many issues,” Betz said he was willing to work with Schor — just months after he sent an open letter to Schor that asked him to resign as mayor.

“I’m concerned for him. He needs help. I’ve seen this type of behavior before,” Lynn told City Pulse “He’s obviously having some type of crisis. But it’s scary as a Black man. The way he was talking to me made me feel like he was trying to goat me into a fight. I’ve seen this before.”

Betz said today that his language was “unprofessional” and claimed he only wrote the messages in response to Lynn “threatening physical harm against me and my family multiple times.” Betz said that Lynn has been “wildly abusive” to him. The texts were a “brash decision.”

“Context is important here if you want to get the story right. Although what I said to Mr. Lynn was unprofessional, the texts came as a conclusion to a conversation that had been ongoing.”

Betz also said Black Lives Matter activists — including Lynn — have repeatedly pressured him to pursue a “no confidence” vote against Schor, but no other Council members would support it.

“What was a one-way relationship turned into Black Lives Matter and specifically Mike Lynn claiming that I was a white supremacist for not doing the work for them,” Betz said. “Although I had sacrificed my political career for this cause, they turned on me and began harassing me both privately and publicly. I am human and do not take threats against me or my family lightly.”

Lynn said he never threatened or intended harm to Betz or his family, claiming that yesterday’s text message exchange was the first time the two have spoken directly since at mid-December.