Getting back to the wild side 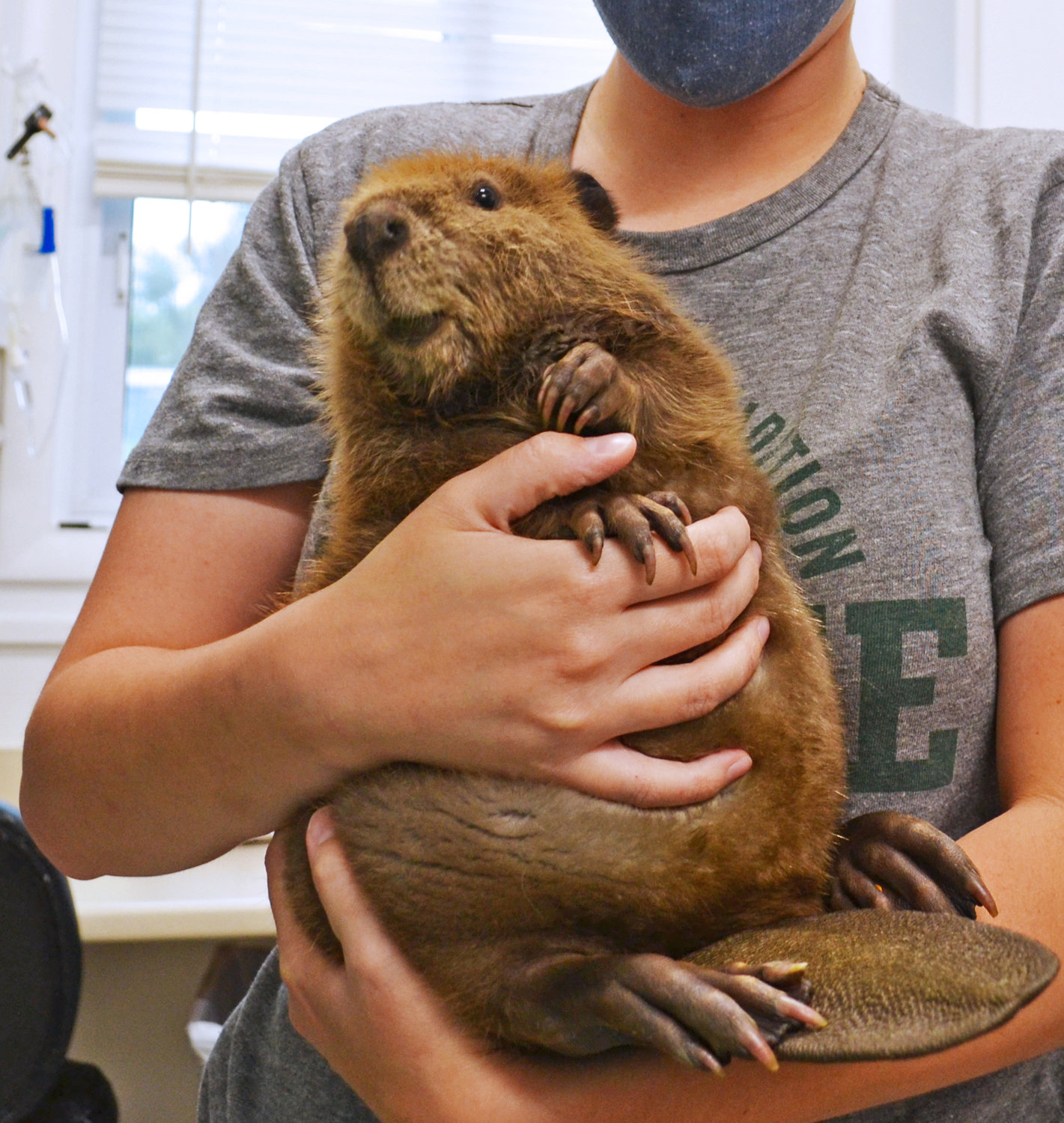 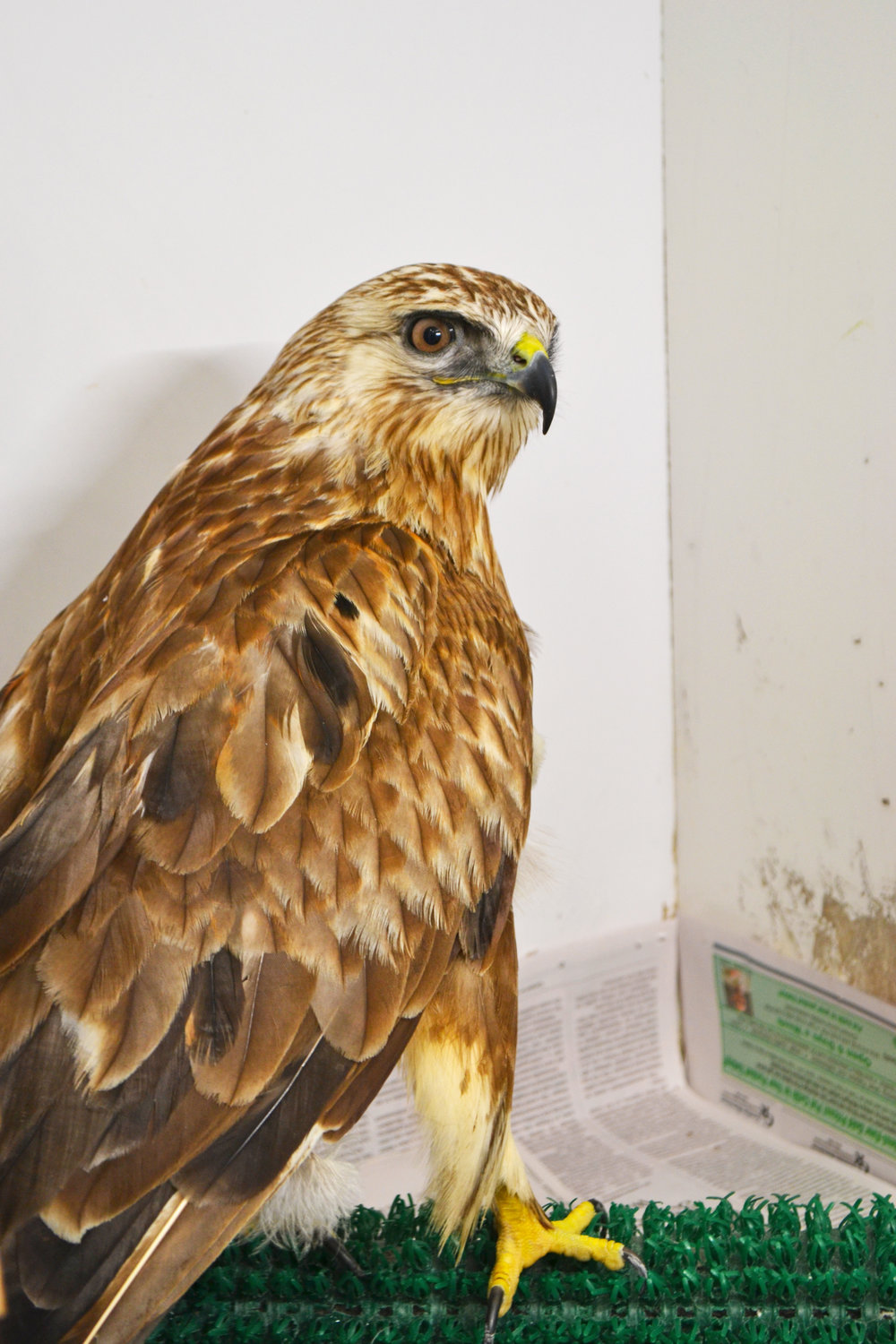 Toffee, a flightless rough-legged hawk, is non-releasable. She will eventually leave Wildside and became part of an educational program at a different animal center.
Courtesy 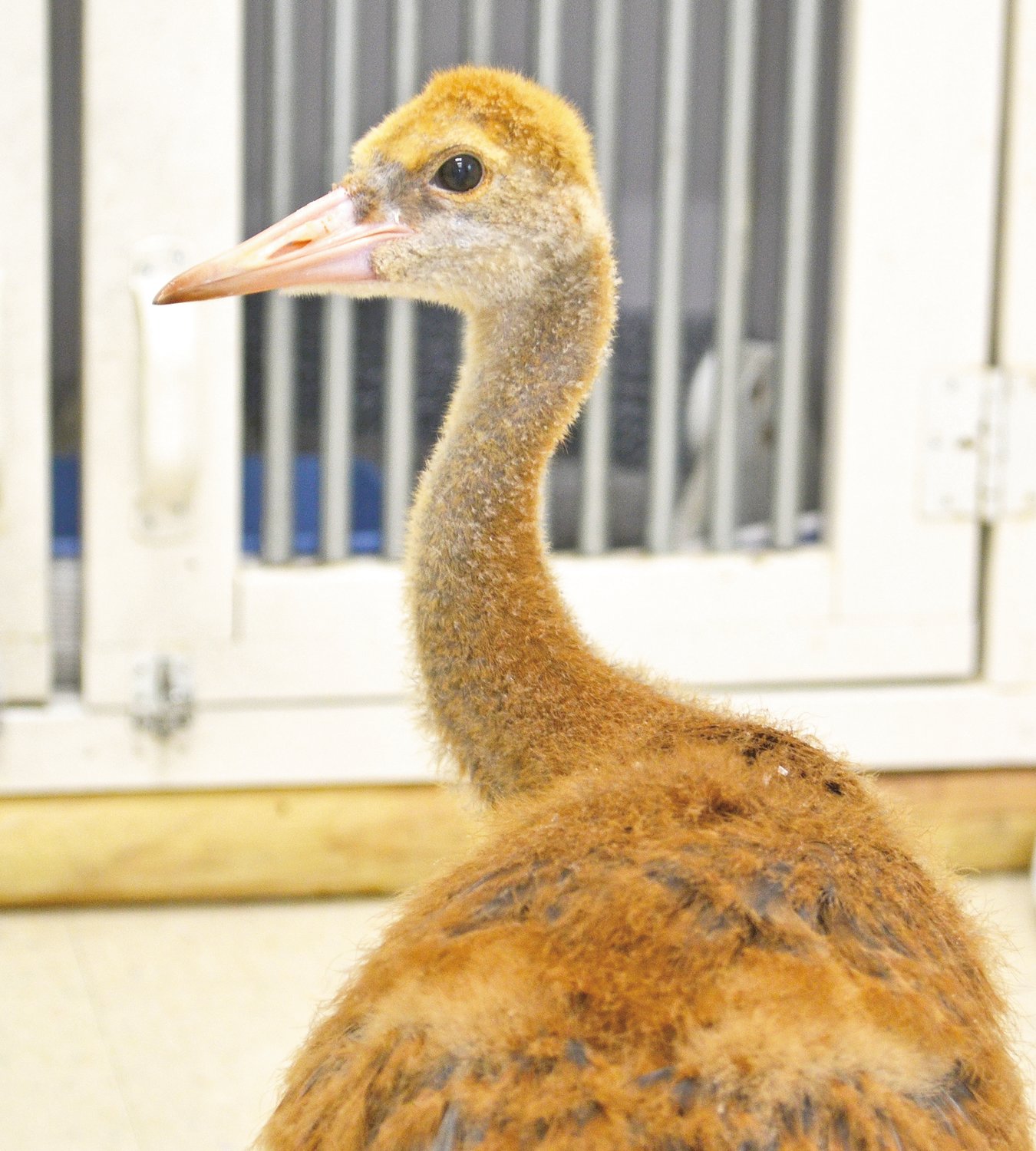 A recovering sandhill crane that was brought into Wildside with two fractured legs. Its next destination is Howell Nature Center.
Skyler Ashley/City Pulse 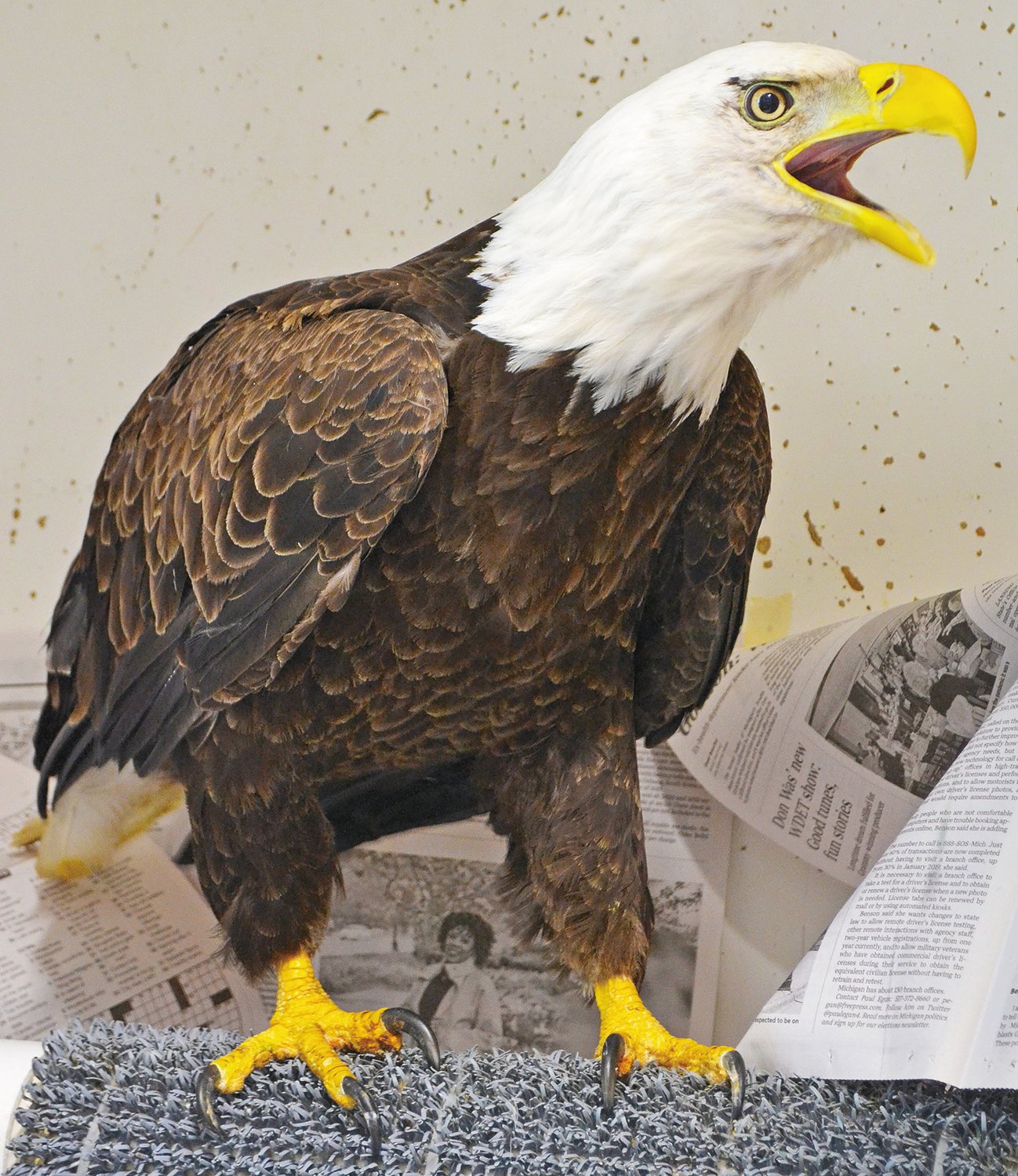 Lincoln the bald eagle. He is in Wildside for lead poisoning. He receives a medicine injection twice daily. After his recovery, he will be released into the wild.
Skyler Ashley/City Pulse 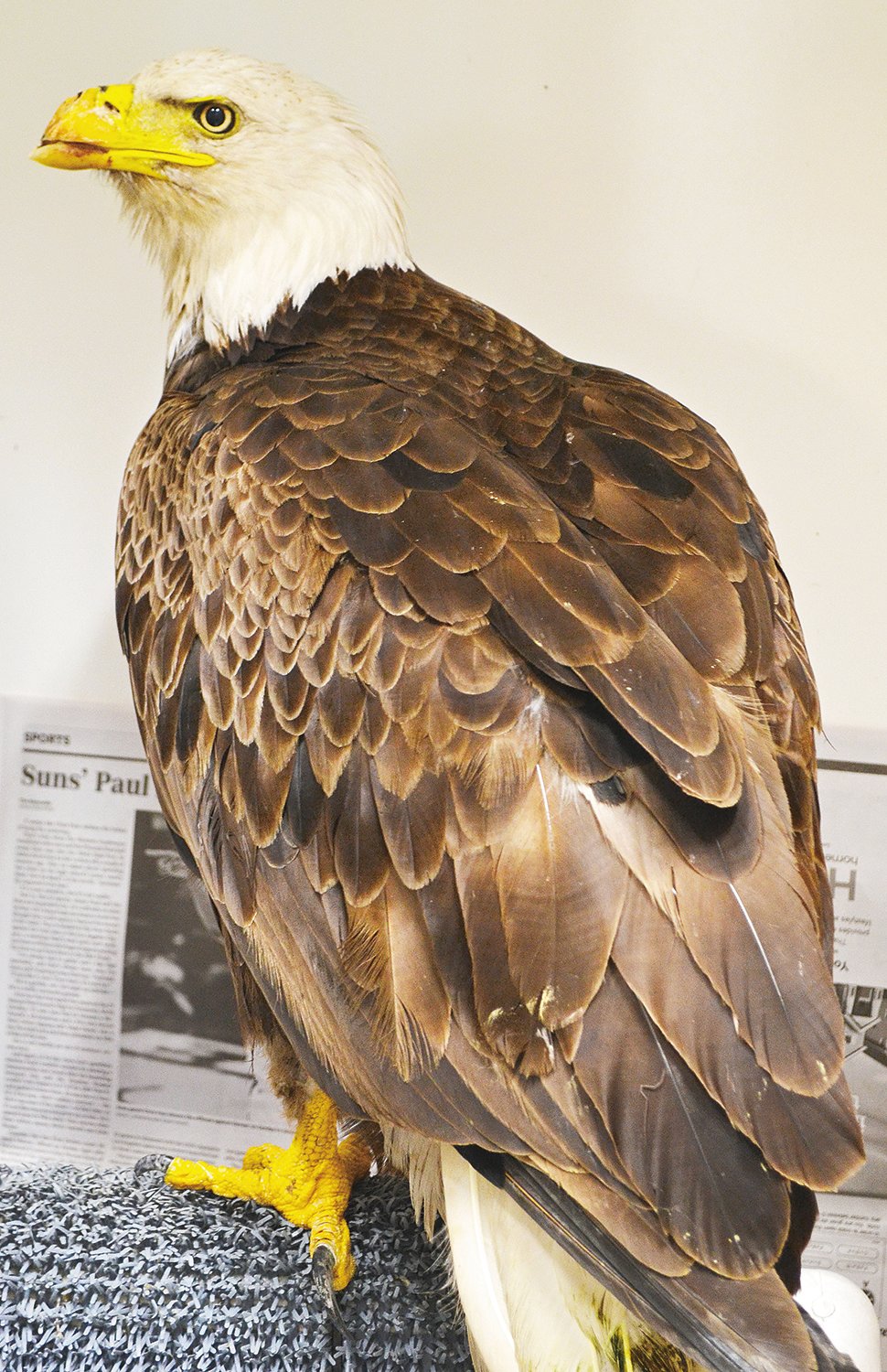 Hope the bald eagle was brought into Wildside because of an injured beak. Once its beak regrows long enough she will be released.
Skyler Ashley/City Pulse 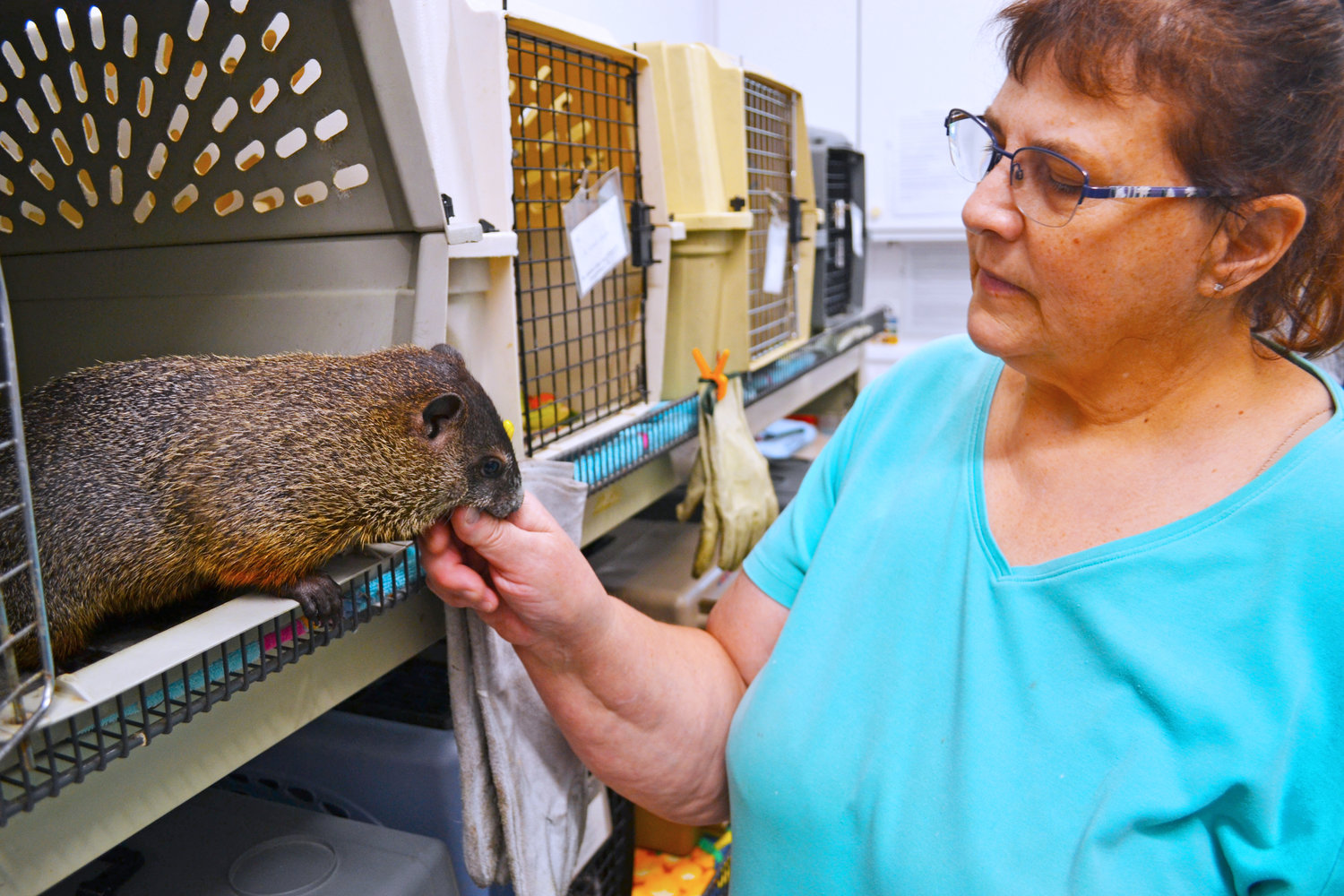 Wildside founder and director Louise Sagaert with a woodchuck that is being prepared for life back in the wild.
Skyler Ashley/City Pulse 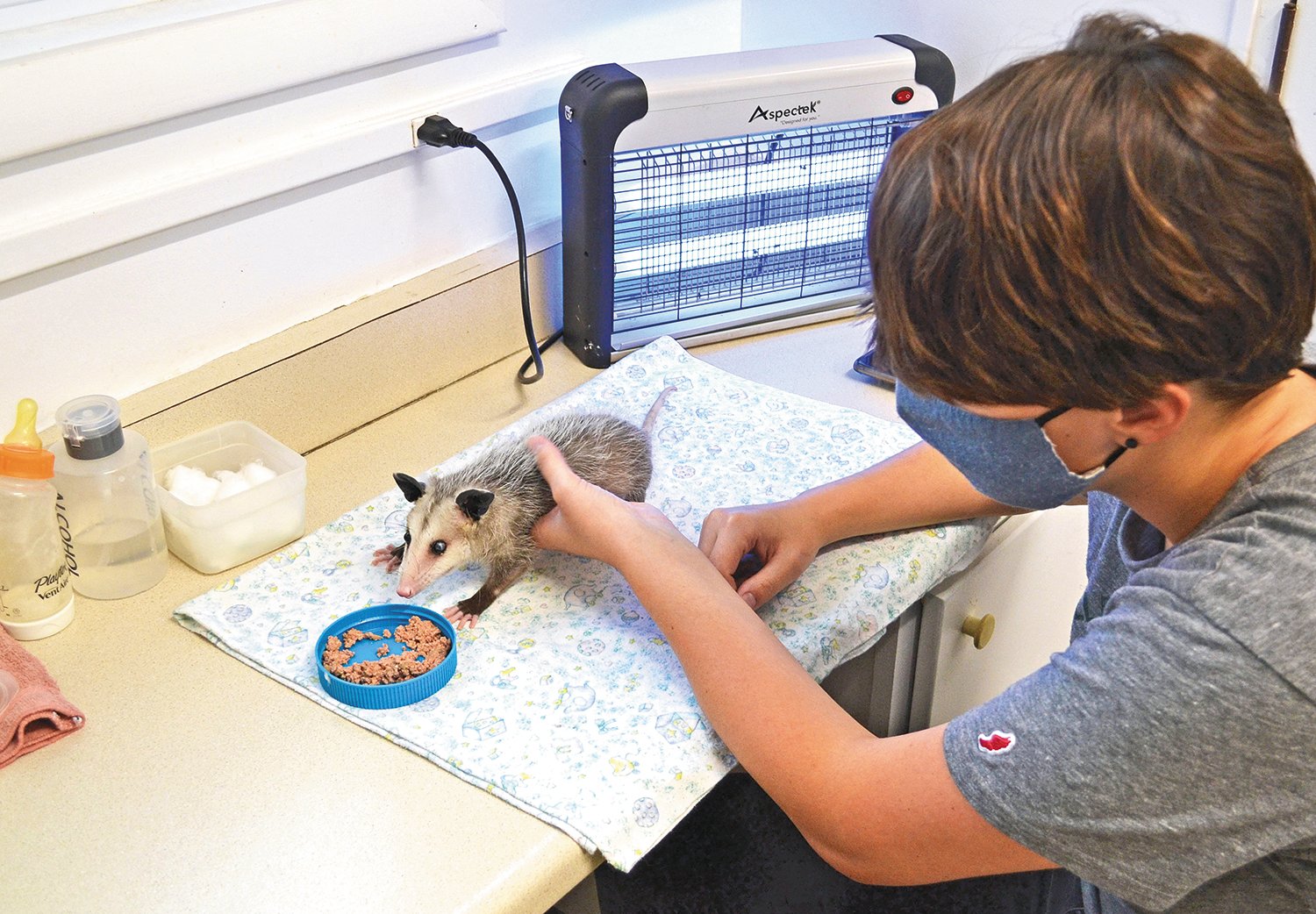 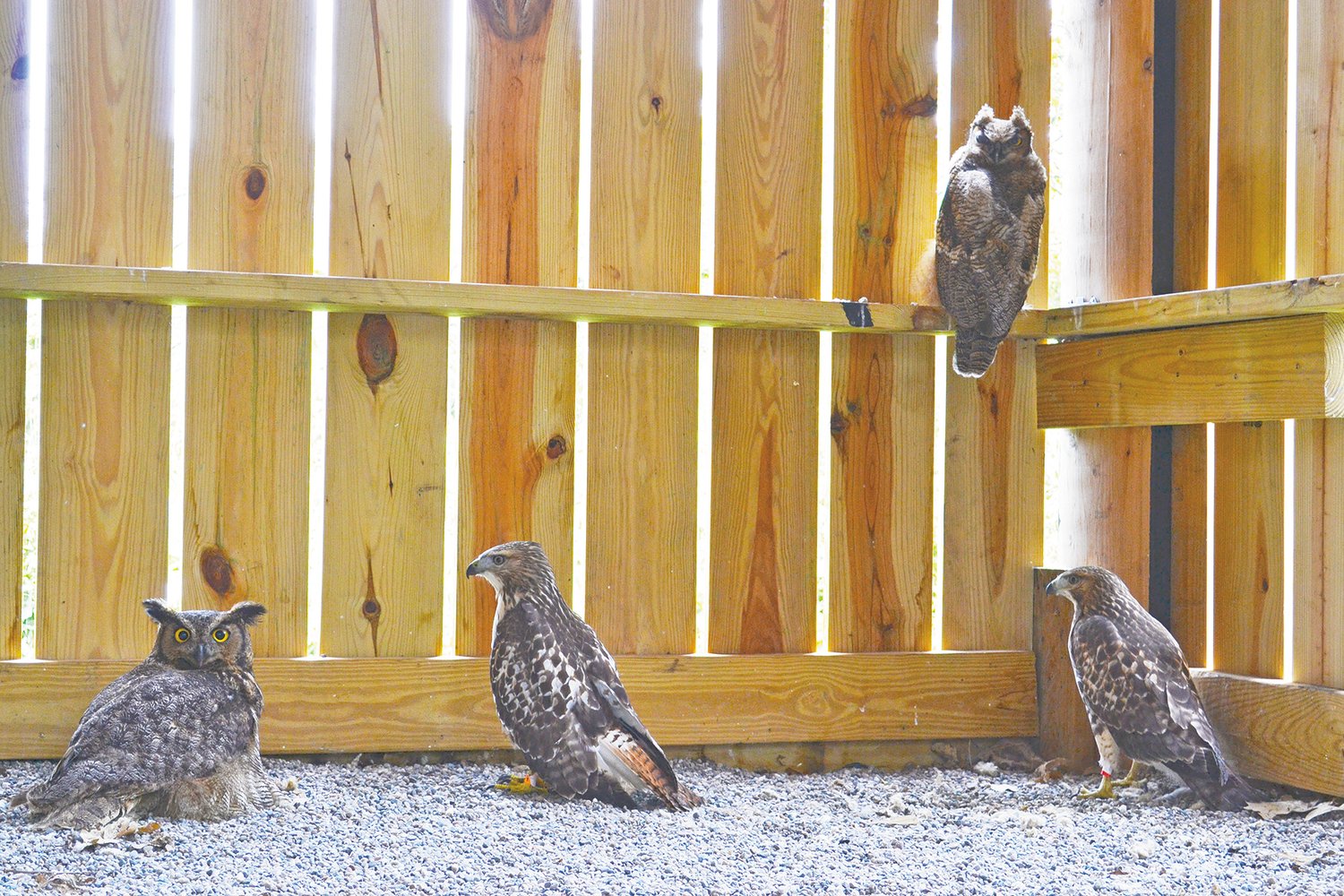 Wildside Rehabiliation and Education Center has a massive flight cage on its property that houses large birds including falcons, hawks, owls and eagles.
Skyler Ashley/City Pulse 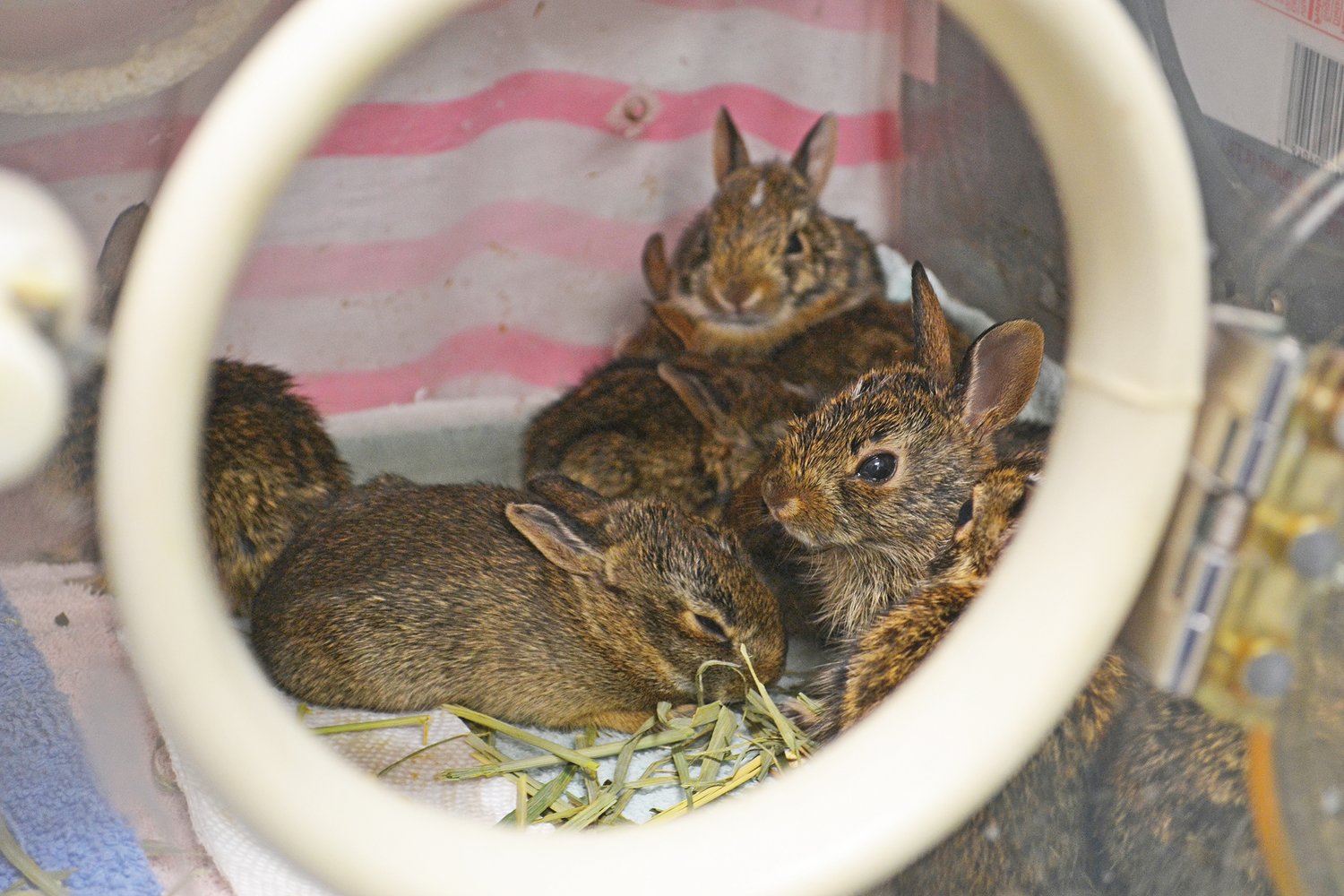 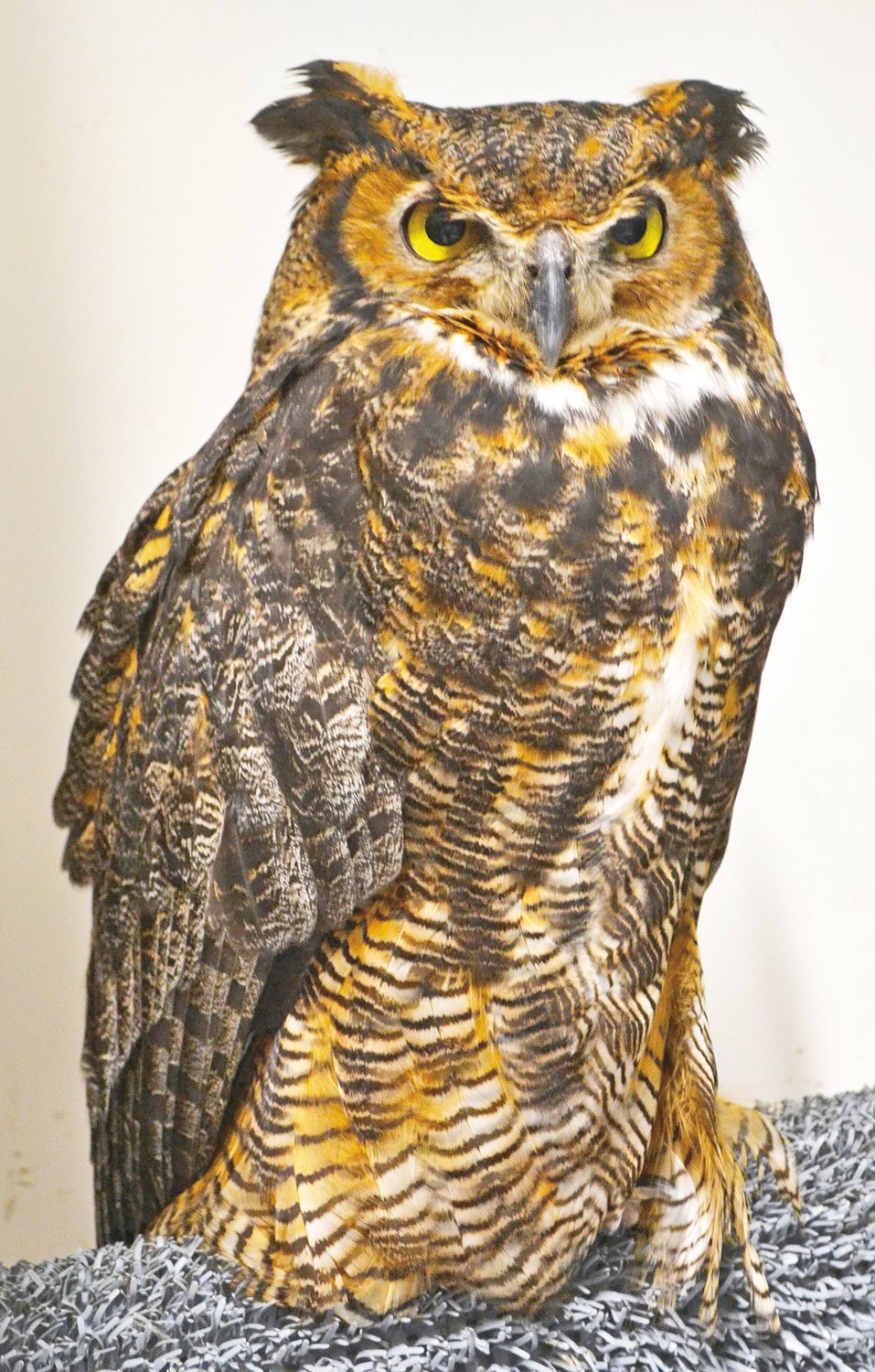 From the tiniest of baby rabbits to the fiercest of bald eagles, any wild animal out there, no matter its position on the food chain, can become prone to a life-threatening injury. Unfortunate critters that wind up with a fractured leg or a broken wing have a friend in Louise Sagaert, founder and director of Wildside Rehabilitation and Education Center, an organization that has been nursing injured animals back to health since 1995.

Sagaert, 57, fell in love with animals from a young age, growing up in a household packed with cute pets. Throughout her childhood in Grosse Pointe, Sagaert seemed to always find herself nurturing a wounded animal in need.

“I was always the kid that picked up baby squirrels or found the baby bird that was hurt. I’d take them home and try to nurse them back to health. I went to the veterinarians to figure out what to do. Most of the time it wouldn’t turn out well and I would cry,” Sagaert said.

Sagaert’s first visit to a volunteer-run animal rehabilitation center was 32 years ago. She visited Critter Alley in Grand Ledge with her sister and immediately found herself positively enchanted. One trip is all it took for Sagaert to know precisely what she wanted to do with the rest of her life.

“I fell in love the first day I was there. It was my thing. I knew it was what I was destined to do,” Sagaert said.

Though her sister stopped volunteering at Critter Alley after three months, Sagaert pressed on, becoming volunteer coordinator and eventually assistant director. Several years later, she knew it was time for her to open her own rehabilitation center.

After gathering enough funding, Sagaert purchased the house and property in 1995 that still houses Wildside. At first, Sagaert had just a few volunteers working with her who tagged along from Critter Alley. Wildside’s original clinic consisted of a single room that had no air conditioning or running water, just some shelves and a workbench.

Sagaert began to slowly upgrade the space, and the experience she gained at Critter Alley gave her the proper know-how for all of the necessary equipment and tools a proper animal rehabilitation center requires. Sagaert’s Critter Alley experience also came in handy handling all of the paperwork with the state.

“We needed kennels; we needed an inspection from the Department of Natural Resources; I had to get my own permit from the U.S. Fish and Wildlife Service, and I had to get the paperwork for a 501c3 — it was a lot of work,” Sagaert said. “I moved in the beginning of September and was open by October.”

Due to its humble size, Wildside initially tended only to squirrels and songbirds, with the occasional bird and larger animals such as opossums and woodchucks popping up. Word of mouth, trips to local schools and media promotion helped Wildside grow exponentially. Wildside also saw an influx of people bringing in animals after Critter Alley closed its doors in 2001. In its first year of operation, Wildside tended to only 300 animals. In 2020, Wildside’s busiest year to date, it took care of 2,500.

“People didn’t know we were here. We started getting some newspaper articles, and I would do programs at schools. People started to recognize that there was another facility in the area,” Sagaert said. “Every year we grow in the number of hours volunteers spend and the number of interns we have.”

Wildside, which boasts more than 40 regular volunteers and several interns from colleges like Michigan State University, operates using a robust process. First, the center is contacted by somebody who has located an injured animal. If it’s an animal Wildside accepts, the caller is then informed of how to bring the animal in for treatment. Then, a volunteer admits the animal and it is given an exam, which determines vital issues such as what kind of medication is necessary, what wound management it needs and what sort of feeding schedule the animal should be placed on. Animals are kept at Wildside up to 180 days. A stay longer than 180 days requires additional approval from the U.S. Fish and Wildlife Services.

“If they’re here for a short time and we can put them back where they came from, especially adult animals, that’s always best. If it’s a young animal, they don’t have a home. We find the appropriate habitat and release them there,” Sagaert said.

Emma McGeath, 21, spends most of her days helping out at the rehabilitation center. Several months into her internship at Wildside, she plans to one day pursue a career in veterinary science. McGeath can be found tending to animals such as beavers, woodchucks, opossums and other animals. McGeath also assists in managing Wildside’s massive flight cage, which houses larger birds, including hawks, falcons and owls.

“When I first came here, we had an influx of baby animals. I spent all day feeding babies. Now that baby season has calmed down, I spend most of my time cleaning cages and giving animals their medicine. There’s also a lot of dishes and laundry,” McGeath said. “I want to go into the veterinary field, and I love the wildlife experience here.”

If Wildside is contacted about an animal it does not rehabilitate, such as a raccoon, it will use its connections with the vast network of rehabilitation centers across the country to find the injured animal the help it needs. It’s Sagaert’s policy to never turn down an animal that she can help.

“If an animal needs help, I am going to find help for it. If I can’t take it, I will find help somewhere else,” she said.

While Wildside has expanded greatly over the years, building a massive flight cage for its larger birds in 2019, it still remains independent and funded entirely by contributions from sponsors and independent donors, including one anonymous philanthropist who recently donated $15,000. Sagaert also chips in money she earns from her other full-time job as a special education teacher at Eaton Rapids High School.

Sagaert may one day retire. But like some of her colleagues who have run animal rehabilitation centers well into their 80s, she’s not going anywhere yet.

“There’s people in their 80s that are still out there catching eagles. I hope I can do it then,” Sagaert. “You don’t go on vacation when you have a job like this. Unless there’s somebody here that can be you, which is really hard.”

To learn more about Wildside Rehabilitation and Education Center and how you can help out, visit:  Facebook.com/WildsideRehab or WildSideMI.Wordpress.com