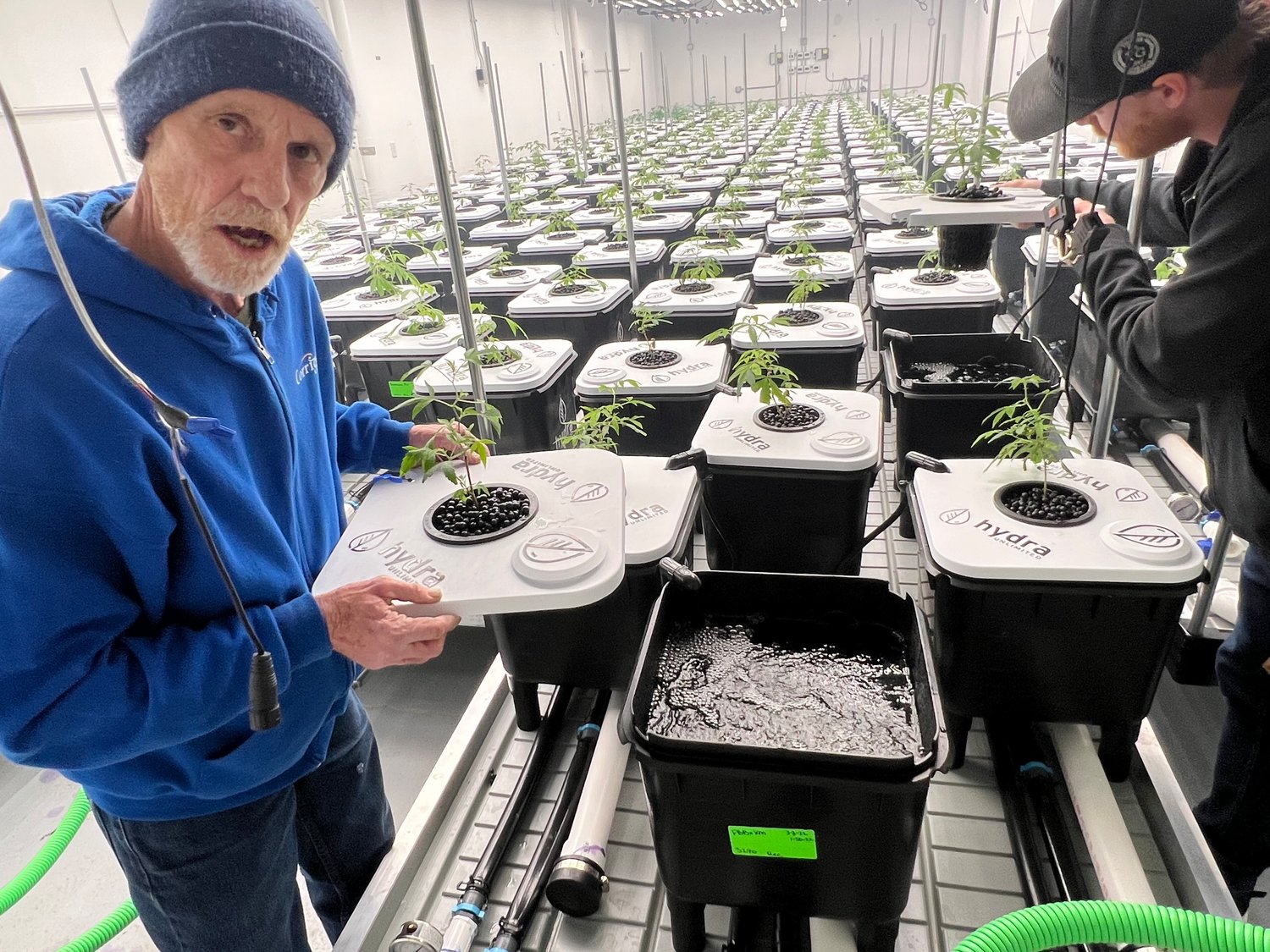 By now, just about every stoner has heard of hydroponics: the remarkable dirtless growing system that uses nutrients infused directly into water to replace the need for traditional soils.

As indoor marijuana cultivation took off in the ‘80s, hydroponics became the go-to method for pot farmers who wanted more control over the nutrients that flowed to their precious bud gardens — which allowed for more consistency from harvest to harvest and, of course, much danker weed.

Lesser known in the cannabis space, however, is the ancient agricultural technique of aquaponics. In fact, there’s believed to be only one weed growing operation that’s using the system in Michigan — and it’s right here in southwest Lansing: Thumb Genetics.

After getting an early start in the industry as medical marijuana caregivers, Lloyd Owens and his son Jack Owens (along with a few other friends and family members) started the company in 2017 with the goal of finding a cheaper, environmentally friendly way to grow weed. And only about a year after their first harvest, they’ve already declared their mission accomplished.

“We’ve built a system that can produce a gram of marijuana at about 50% less than the national average cost,” Lloyd Owens said. “We cut electricity costs. We cut labor costs. We’ve almost completely eliminated costs for fertilizers and nutrients. The goal was to take the costs out of production. That’s what we wanted, and that’s what we’ve done. We’ve proven this system.”

The grow operation is housed inside a hulking 43,000-square-foot industrial building just south of REO Town on S. Washington Avenue, tucked behind the Quality Dairy headquarters.

Like hydroponics, aquaponics also doesn’t involve the use of soil. Hundreds of plants at Thumb Genetics, accordingly, are planted in pots filled with plastic beads with roots dangling in water. But instead of dumping jugs of fertilizers and blowing through hundreds of gallons of water for every crop, the Owens and their 10-person pot farming team are using another nutrient source.

Alongside rows and rows (and more rows) of marijuana, several large tanks filled with hundreds of Nile Tilapia are bubbling away inside the building — and their excrement is all that’s needed to keep essential nutrients feeding the water supply. From there, tanks of microbes — some of which are filled with snails, nematodes and earthworms — help convert the ammonia from the fish feces into nitrates, which then flows directly to the marijuana roots for essential nitrogen.

The water then recycles its way back around to the fish and the ecosphere keeps on spinning indefinitely. The same 10,000 gallons of water has been recirculating there now for two years.

Sustainability is a key aspect of the operation — and it helps shave down costs too. With the state’s pot prices plummeting to all-time lows, that’ll be important for survival, Owens explained.

Thousands of dollars in synthetic chemicals and artificial nutrients typically required of more traditional agricultural techniques, instead, have been replaced with $80 a month in fish food.

“It saves costs, but we did this because we wanted a more environmentally sound production, too,” Lloyd Owens said. “If I flow all these chemicals through my plants like a regular grow, the water is just thrown away. Our sanitary systems are not designed to handle those chemicals.”

With their first harvest last February, still only a fraction of their leased space was actually being used for cultivation with three flowering rooms last week. The Owens are looking for investors to help fund their buildout plans — an additional 10 flowering rooms — before the end of the year.

Even then, however, the hardest workers at the company may still be the tilapia — a breed picked for its hardness and ability to live up to a decade. With age, they’ll stop pooping so much and need to be replaced. At that point, they’ll all be donated to a food bank for local families.

“It’s the gift that keeps on giving,” Jack Owens joked during a tour of the building last week.

The FDA doesn’t hand out certified organic labels for marijuana products, but the in-house ecosystem over at Thumb Genetics may be about as close as it gets to being all-natural. And it all makes for some pretty dank bud. Thumb Genetics products aren’t widely available in Greater Lansing, though I managed to find a $45 eighth of Kush Mints at Edgewood Wellness last week.

It was a tad dry, yet smooth, pleasantly minty and made for a wonderfully uplifting sort of high.

Watch those shelves — the Owens said they plan to have two dozen other strains available locally soon, including Acai Runtz, Blueberry Headband, Lemon Skunk and Superglue.

Check out more pictures of Thumb Genetics on Instagram at instagram.com/thumbgenetics.

Kyle Kaminski is City Pulse’s managing editor and a cannabis enthusiast who has been smoking marijuana just about daily for the last decade. Editor & Publisher Magazine has also labeled him as “arguably, the state’s authority on everything you need to know about cannabis.”