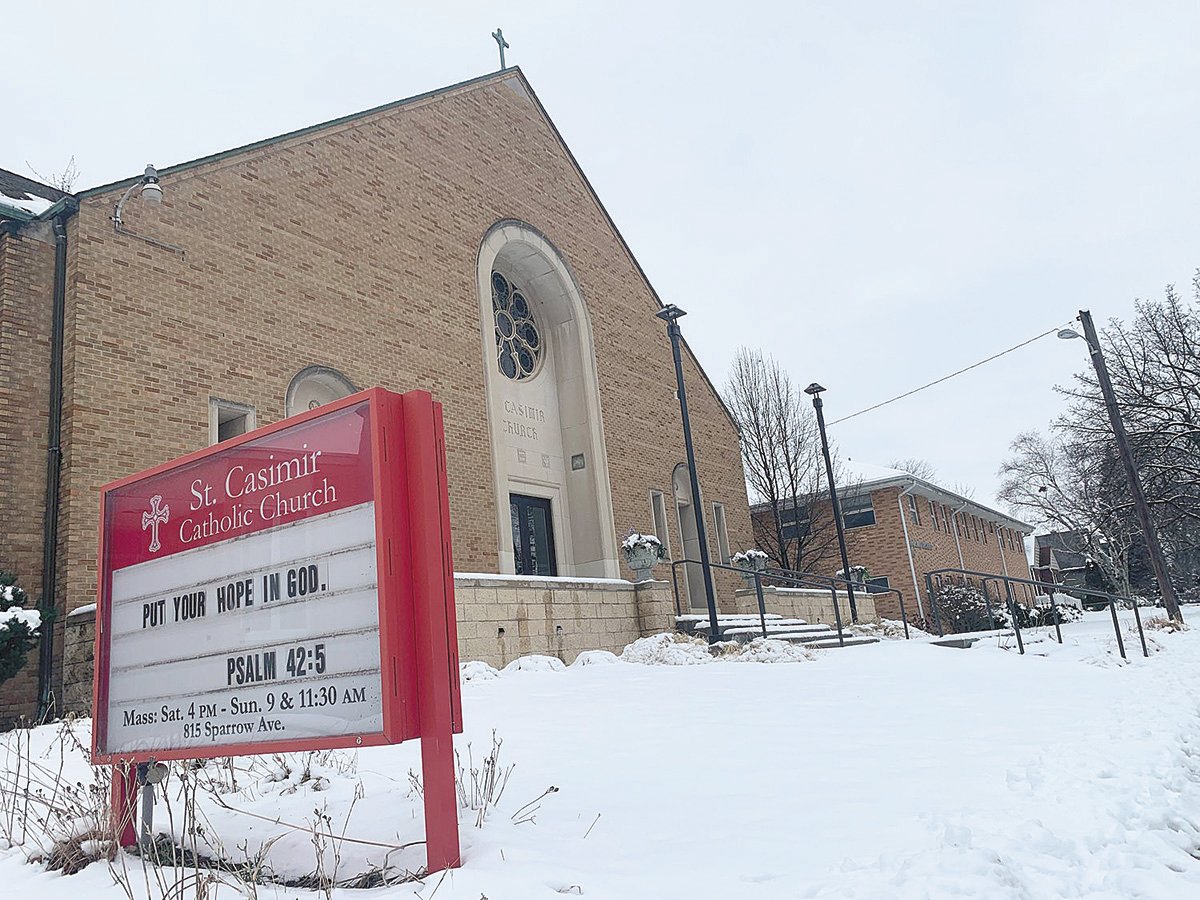 Child and Family Services wants to buy the old St. Casimir Catholic Church, on Sparrow Avenue, to use as a counseling center, but the Catholic Diocese of Lansing is seeking discriminatory restrictions on its use.
Kyle Kaminski/City Pulse
Posted Wednesday, May 12, 2021 12:00 am

Any deed of sale includes a fairly predictable list of potential activities which the Catholic Church would deem unsuitable for a former place of worship including, for example, a strip club, a pornography store, a euthanasia clinic, or a place where gender “transitioning” or “reassignment” procedures are facilitated or promoted.”
— David Kerr, Lansing Catholic Diocese spokesman
TODD HEYWOOD

Proposed property deed restrictions discriminating against transgender people, among others, could derail early plans for a local nonprofit to purchase and renovate the shuttered St. Casimir Catholic Church and Parish in Lansing.

Child and Family Charities announced plans this year to purchase the three-acre parcel on Sparrow Avenue after the church closed last summer. The city’s Planning Commission and the City Council have since greenlit the nonprofit’s plans to renovate the campus and open a new headquarters for counseling operations, a community center and an emergency youth shelter.

Those plans hit a snag this week, however, after the Catholic Diocese of Lansing proposed a set of strict limits on the property that would forever prohibit the property from being use for, among other things, supportive services for transgender people or birth control distribution. Those restrictions, called a covenant, would be attached to the former church site indefinitely.

Child and Family Charities CEO Julie Thomasma said Monday that her organization had not yet discussed the proposal with church. Those property sale negotiations are still ongoing.

Thomasma declined to comment on the substance of the proposed property restrictions but noted that Child and Family Charities is committed to living its “values and mission” —  including being “an inclusive” and “very welcoming” agency for any person in need of its assistance.

The agency, located in Delhi Township, has been pursuing the former St. Casimir property since last year. Its plans include relocating counseling services to southwest Lansing and opening a youth center for up to 14 local children experiencing homelessness.

“Whenever the Catholic Church sells any place of worship there are always stipulations included in the deed of sale preventing that sacred building being subsequently used for purposes contrary to the ethical standards of the Catholic Church — this is a long-established, widely accepted, and, until now, unremarkable practice that, we would contend is both reasonable and legal,” Kerr said.

Added Kerr: “The addition of a clause on gender ‘transitioning’ or ‘reassignment’ procedures is a more recent addition to such deed restrictions. I’m not sure what other diocese in Michigan or elsewhere in the United States are doing but, I suspect, they too are responding in similar fashion as new ethical issues rise to prominence within contemporary society.”

The diocese announced a new policy on gender identity Jan. 15 that requires a rejection of “gender theories” and strict adherence to recognizing only the “God-given biological sex.” It also calls for counseling services provided by Christian counselors with a “correct” understanding of that belief. The church also flatly rejected the use of medical interventions for transgender people, including puberty blockers and other medically necessary transition-related care.

“Enforcement of the restriction on gender transitioning activities and gender reassignment, which are promoted, advocated or encouraged, would go against Lansing’s HRO” — Human Rights Ordinance — “as well Michigan civil rights laws, as interpreted by the Michigan Civil Rights Commission in 2018, that transgender people are protected against discrimination in public accommodations under the category of sex,” said Jay Kaplan, staff attorney for the ACLU of Michigan’s LGBT Project.

That opinion was supported by Lansing City Council President Peter Spadafore, who said the “disappointing” proposed deed restrictions could harm youth who are already at higher risk.

City Attorney Jim Smiertka said the city’s ordinance is unlikely to provide relief, but he noted a new property owner who doubts the legality of a deed restriction can “ignore” it, triggering a court battle that would weigh the seller’s First Amendment rights with the buyer’s property rights.

Race- and religion-based covenants on property deeds have a sordid history in Michigan. While the Fair Housing Act made such restrictions illegal, many of them remain on the books and on properties throughout the state. State Rep. Sarah Anthony introduced legislation in February that would allow those illegal property deed covenants to be eliminated statewide.

Anthony was “concerned” about the proposed restrictions at the former St. Casimir property.

“It shows that we have some work to do to make sure we are an inclusive community,” she said.

The proposed restriction on promoting or distributing contraception could also have a significant impact on sexually transmitted infection rates in the county’s youth population, Vail added. Despite the pandemic, Gonorrhea rates increased locally and statewide over the last year.

For Vail, the issue is about the “right” to access healthcare. Additionally, she said that prohibiting one location from providing specific care needs — such as counseling or condoms — could create additional barriers to care, increasing the likelihood that those needs won’t be met.

Mayor Andy Schor said he was “disappointed” in the restrictions after his administration had worked to repurpose the property. He also called on the church to “reconsider” the proposal.

“Our social service agencies work with everyone that comes to them, and this would be an excellent re-use of this empty space,” Schor said.

City Councilwoman and mayoral candidate Patricia Spitzley called the proposed covenants “disappointing” and noted the nefarious use of such restrictions in the past to harm minorities.

“This proposal serves a critical need in our community and we must stand against any action that seeks to derail it,” Spitzley said.

Councilwoman and mayoral candidate Kathie Dunbar took no position and suggested City Pulse call neighborhood leaders. Dunbar is the executive director of the South Lansing Community Development Association, which is headquartered in St. Casimir. She was also the lead sponsor of the human rights ordinance that bans discrimination on the basis of sexual orientation and gender identity.

Vicki Levengood, a spokeswoman for the Michigan Department of Civil Rights, also confirmed that state civil rights laws and the 2018 interpretative statement on LGBTQ discrimination applies to real estate transactions. Because the agency may field a complaint on the proposed deed restrictions, however, she declined to elaborate further on the legal issues at play.