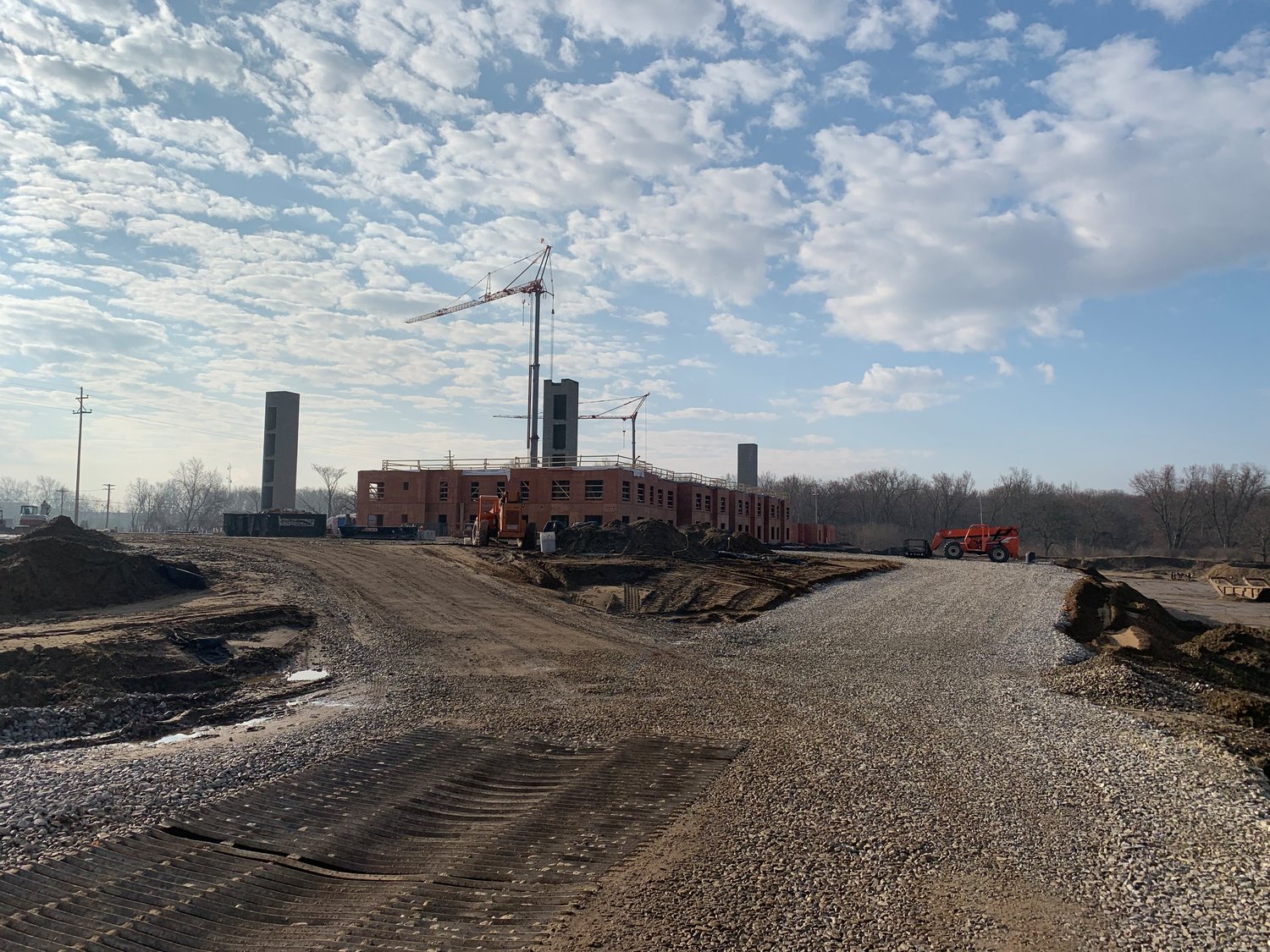 TUESDAY, March 24 —Developers of the former Red Cedar Golf Course still plan to push forward with their project as early as next month, despite being turned down for tax incentives from the state of Michigan.

That reverses a decision the developers announced last week that they would halt their project after the Michigan Strategic Fund rejected a multi-million-dollar tax increment financing package to help support construction on the property.

Christopher Stralkowski, Red Cedar project manager for Continental Ferguson LLC, said Monday construction will move forward with a “private investment” of nearly $275 million. He declined to say whether his company would seek additional tax incentives, including the possibility of a third attempt to secure state financing.

Regardless, it appears construction there — or anywhere else in the state — has been halted until at least April 13 under Whitmer’s recent “Stay Home, Stay Safe” executive order that mandates nonessential employees work from home. A list of essential employees that can continue to report to work doesn’t appear to include builders.

“This has always been a privately financed project,” Stralkowski told City Pulse without further explanation.

Continental Ferguson was formed by Frank Kass, a Columbus, Ohio, developer who specializes in student housing, and Joel Ferguson, a Lansing developer and a trustee at Michigan State University.

In a statement released on Monday, Stralkowski said his company remains committed to Lansing and will continue to “work with all stakeholders” to make the project successful. He touted the project’s ability to create over 1,000 jobs and create an estimated $500 million economic ripple effect in Lansing over the next 30 years.

Rejected plans to prop up the nearly $275-million superdevelopment with tax incentives didn’t include enough information or comport with Michigan Strategic Fund guidelines and would not result in “overall increased economic opportunity for the region,” according to officials at the Michigan Economic Development Corp.

Funding for the plan was shot down by the Michigan Strategic Fund Board 8-2 with one abstention last week. While developers can submit another plan, they previously planned to pull the plug on the project altogether.

“We’ve been funding this internally and frankly, I’m out of money. We’re going to have to close the site down. It’s as simple as that,” Kass told the Michigan Strategic Fund board last week before the recent plan rejection.

Lansing Mayor Andy Schor was uncertain whether the developers would make another attempt to secure state financing, but said officials at the Lansing Economic Area Partnership are actively exploring the concept. It’s also unclear whether the project will actually be able to move forward without that financial support from the state.

“We’ll take a look and see if there are other things that can be changed,” Schor said. “I think we’ll be having a conversation with MEDC to see what changes could be made to make them more comfortable with the plan. We’re still expecting the same project: The hotels, the mixed-use and everything else. We’re counting on it.”

In turning down tax incentives for the project last month, the MEDC noted the project, in its initial form, did not meet “core strategic priorities” — like greater access to affordable or low-income housing, revitalizing or stimulating development in downtown areas or the creation of a long-term, net economic benefit in Lansing.

Using that feedback, developers — in tandem with the Lansing Economic Area Partnership — submitted a revised plan for tax incentives that was reviewed by the Strategic Fund Board at its remote meeting last week. The result: A major strike two for the developers as they head back to the drawing board for more adjustments.

“It is difficult to evaluate the ability of this project to attract talent, provide greater access to necessary housing, or create long-term, net economic benefits that are key elements of the state’s economic development priorities,” according to an MEDC recommendation that was sent to the Strategic Fund Board before the plan was rejected.

Continental-Ferguson LLC broke ground on the project last October after the Lansing City Council approved a development plan and tax incentives to get the redevelopment started last April. Construction was ongoing on Monday afternoon as dozens of contractors worked to construct a third floor to one of the buildings on site.

Kass told MEDC the project would generate $100 million in new property taxes and bring in more than $10 million in hotel room revenue annually — a boon that he contended would spread across the rest of the region. The project was also slated to provide construction companies up $120 million by the time it was finished.

Plans apparently still call for the vacant parcel to be transformed into market-rate and student housing, a hotel, a senior care facility, an amphitheater and various retail and restaurant space. Developers said the project would create about 400 full-time jobs by the time it opened in 2023, even without the state’s financial endorsement.

Schor said the city will not be on the hook for any of those construction costs should the development fizzle out.

But without support from the MEDC, millions of dollars that could have been captured as part of a tax-increment financing plan to construct the project could no longer be available for developers to spend. Based on Stralkowski’s statement, it now appears developers plan to fill the gap with their own “private” investment.

Calls to Ferguson, Kass and other officials at LEAP were not returned.

The initial plans called for only $177 million in private investment alongside a 30-year Brownfield plan that would have covered about $97 million in infrastructure and soil cleanup from years of chemical treatment at the golf course. Bonds backed by the developers were set to be repaid through eventual property taxes on the site.

Local support for the project’s rejected proposal included $64.9 million in local property tax captures and $278,965 from the Lansing Board of Water & Light to remove an electrical substation on the property. State officials ultimately found a lack of clarity on the financial need and various inconsistencies with state priorities.

Ingham County Drain Commissioner Pat Lindemann said the project will likely move forward regardless. Without it, local residents and businesses will be forced to eat an estimated $4.4 million drainage assessment that would have otherwise been covered by the developers for ongoing work to improve the Montgomery Drain.

Lindemann said the development will increase property values and that a $2 million amphitheater planned for the site is essentially “a gift” to the city of Lansing. And “millions of dollars” in new sidewalks, curbs and gutters wrapped into the project would need to be funded elsewhere should the development ever fall by the wayside.

“There’s no way this isn’t going forward,” Lindemann added. “I think they’ll be revising a plan and resubmitting it to MEDC, though I don’t know what was wrong with the first one. I just can’t understand how anyone wouldn’t see economic development with a project of this size. This is a big deal for the region.”

Schor — after the rejection this month — said developers did “everything” possible to move the project forward to “greatly help the economy as we go into a recession.” He labeled the recent state rejection as  “mind-boggling”

“It is inconceivable to me that the MEDC staff would recommend rejection when this could cost the state nothing due to being a capture of future taxes, and no upfront dollars have been requested from the state,” Schor said in a statement. “The MEDC staff recommendation is resulting in layoffs in our local building trades.”

As the now-settled development agreement shifted in 2018, at least half of the Lansing City Council had also leaned against the project, criticizing the spread of student housing and the layout of its apartment units. Others fumed over what they claimed to be an unnecessary use of eventual tax dollars to support construction.

Student housing was a sticking point for the MEDC as well. State officials, in their rejection, noted that student units consumed more than 60% of the project, making it “impossible” to determine developers’ return on investment and their financial need, also noting that those amenities didn’t warrant limited state incentives.

City Council President Peter Spadafore objected to the proposal, but the Council approved the project 7-1 last April. He’s optimistic about the plan, but questioned the necessity of incentives should it still move forward.

“It certainly makes me question the claims that absent brownfield, the project wasn’t viable,” Spadafore added.

City Pulse needs your support now more than ever. Advertising — almost all our revenue —  has fallen sharply because of closures due to the coronavirus. Our staff is working seven days a week to help keep you informed. Please do what you can at this time to contribute to the City Pulse Fund. All donations are tax-deductible.