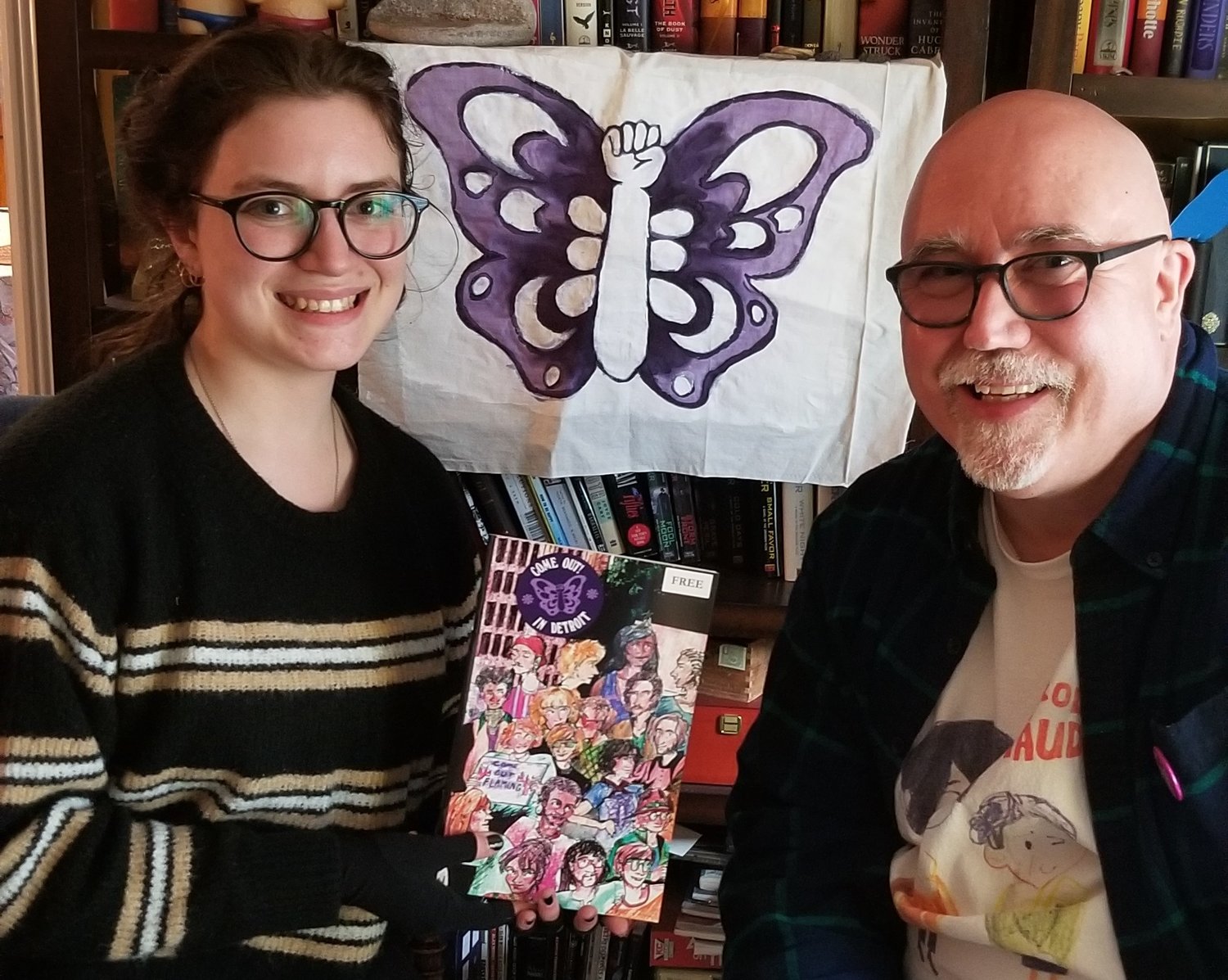 Isabel Clare Paul and Tim Retzloff with “Come Out! In Detroit,” a comic book they co-authored that commemorates the first gay pride march in Michigan 50 years ago.
Courtesy 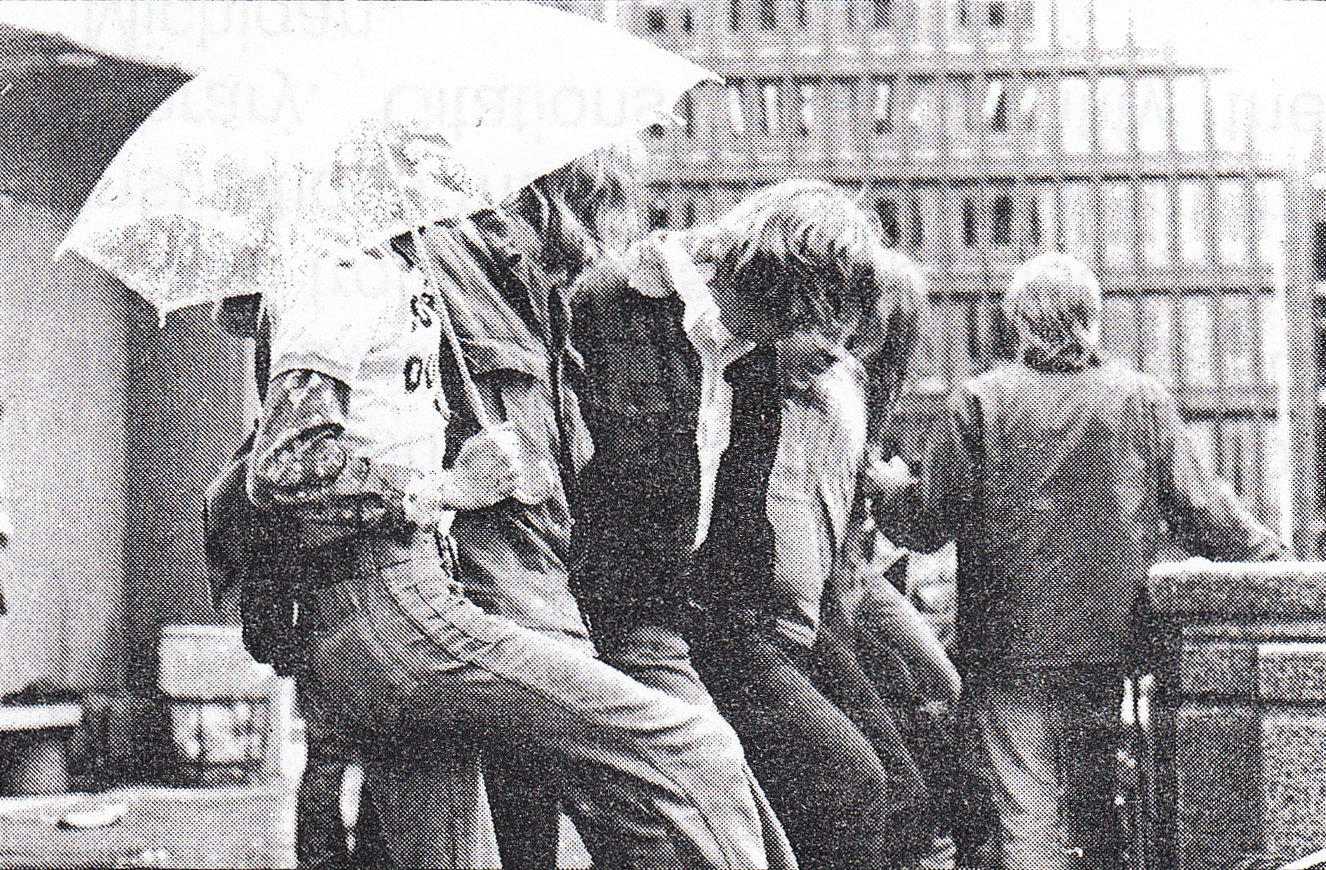 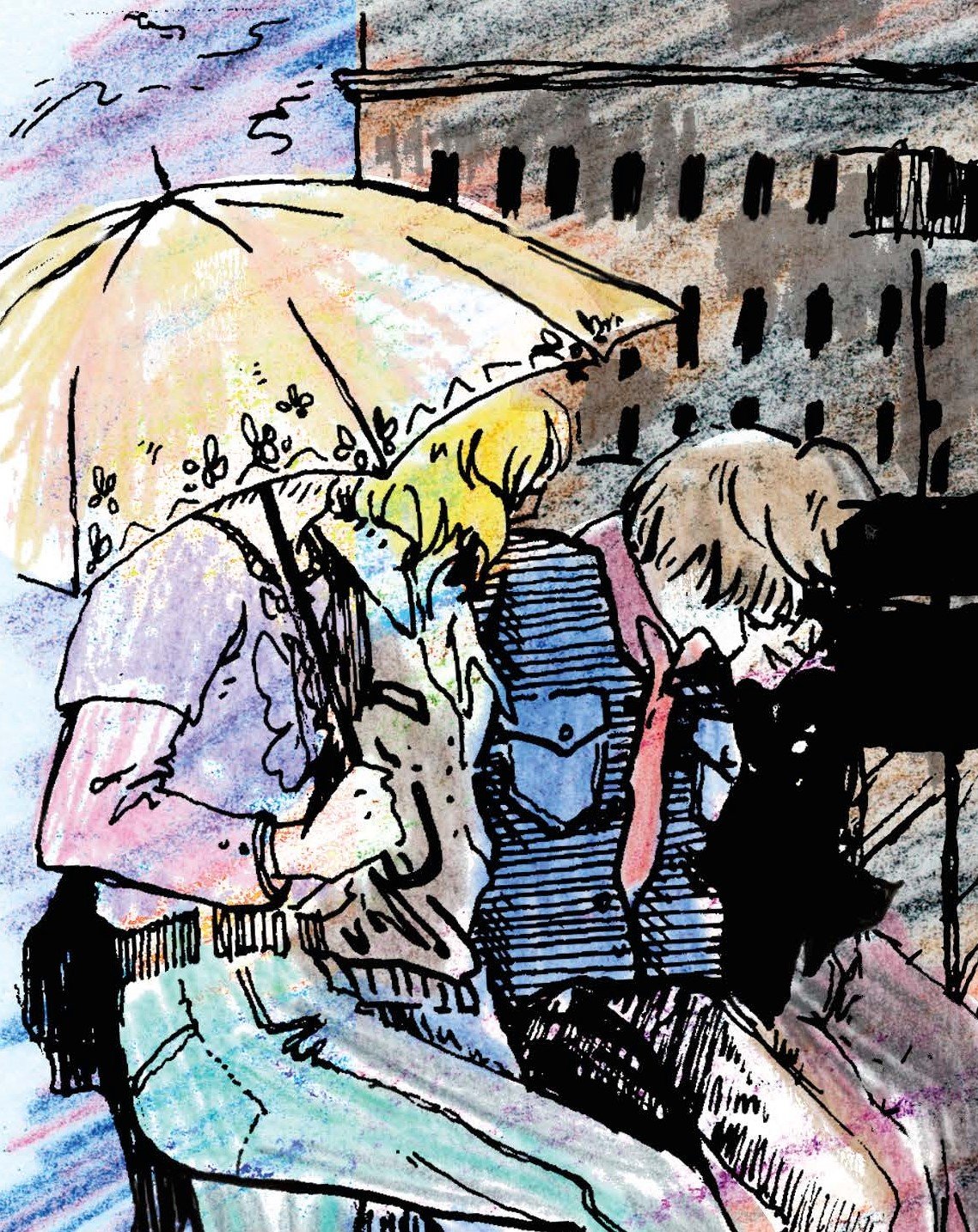 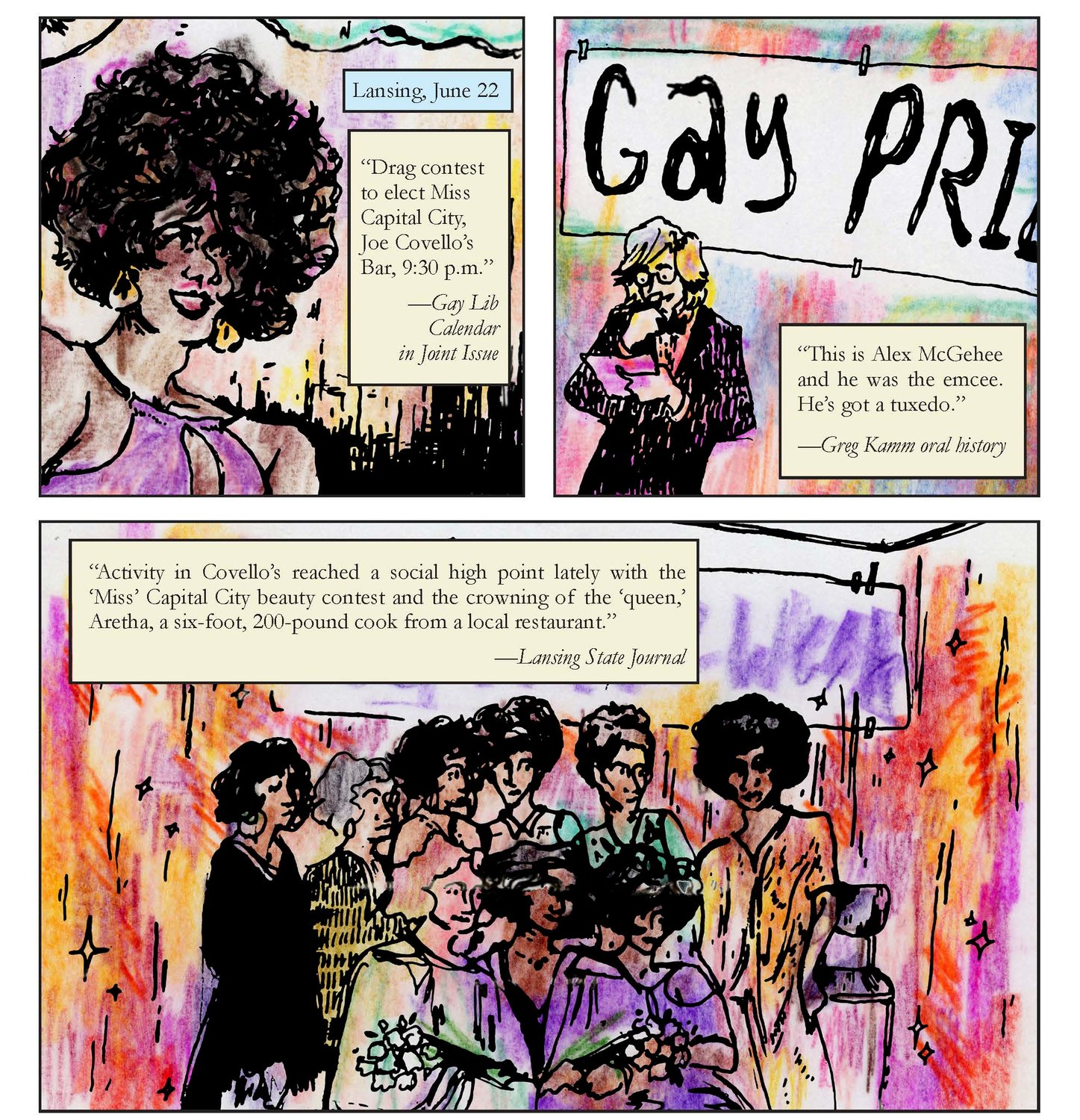 Isabel Clare Paul rendering of Miss Capital City pageant at Joe Covellos, a gay club on Michigan Avenue until it was torn down down in the 1990s for urban renewal. From Page 5 pf Come Out! In Detroit.
Posted Thursday, June 9, 2022 12:00 am
Coming Out! In Lansing

Some stories are best told from below the ankle.

In his zeal to learn as much as possible about the march, historian Tim Retzloff wrote to a participant, Dan Shafarman, hoping for some photos or an eyewitness account.

“I did go to Detroit in June ’72 for the express purpose of attending the Pride Parade,” Shafarman wrote back. “However, I ended up in bed with Richard Meador and we somehow managed to miss all the events.”

Feet, marching or otherwise engaged, are a running theme throughout the story.

Ypsilanti artist Isabel Clare Paul shows the diverse assemblage from street level, as a jaywalking sparrow would see it.

“I wanted to show the 6-inch stiletto heels, the work boots, the Converses, the casual shoes, the drama versus the practical,” Paul said.

You get the feeling Paul could draw “War and Peace” by just following the feet, but she does a lot more than that in a free, 28-page comic that is being distributed at Pride events in Lansing and across the state this summer.

“Come Out! In Detroit” is a panoramic view of a life-affirming day, a beautiful, messy, grassroots awakening of pride fueled by anger and protest.

The 1972 march assembled a diverse, statewide community that was just beginning to coalesce into a potent cultural and political movement. There were students and auto workers, young and old people, Black and white people, “short hairs, masculine men, feminine men, frail women, strong women, bisexuals, transsexuals, female impersonators and sex changes,” according to a press account Retzloff quotes in the book.

“The organizers kept touting it as the first one, but I knew there were earlier ones,” he said.

Retzloff, an adjunct history professor at Michigan State University, has studied the LGBTQ+ community for decades, first as an amateur, and later as an independent scholar. He even talked with some of the organizers and participants of the 1972 Detroit march as part of his dissertation research.

“Christopher Street Detroit ’72” was named after the 1969 Stonewall Uprising, when police raided the Stonewall Inn, a gay club in Greenwich Village in New York, setting off six days of protests and resistance that energized the gay rights movement.

“I knew this event took place, and that it was important, but people didn’t know about it,” Retzloff said.

But he didn’t want to write another scholarly article for a tiny audience. He’d been involved in newspaper and magazine articles, panel discussions and radio shows over the years, and he knew they all had brief lifespans. A documentary film would take too long and be too expensive to make.

It struck Retzloff that a free comic book with wide distribution could have broad appeal and staying power without sacrificing scholarly integrity.

Like most American kids, Retzloff, 58, was seduced at an early age by the visual appeal of comics. As a youngster, he repeatedly checked “The Art of Walt Disney,” a “big giant doorstop of a book,” out of the local library, piling up dozens of overdue notices.

“It shows how enthralling all of that work was,” he said.

In junior high school, he created “Captain Vos,” a satirical comic book about a real teacher endowed with super powers.

“Maus,” Art Spiegelman’s seminal graphic novel about the Holocaust, hit Retzloff at just the right time, when he was in his 20s, along with the grim “Dark Knight” run of “Batman.”

Retzloff had built up formidable expertise as a historian and scholar, including a doctorate in history at Yale, but when it came to drawing, he was strictly a stick-figure man.

Fortunately, he knew a baby named Isabel Clare Paul, who called him “Uncle Timmy” as a kid and started drawing almost before she could walk.

“I’ve known Isabel since she was born, through her parents,” Retzloff said. “She grew up and became a lovely young lesbian.”

Paul, who is in her 20s,  up in Michigan and graduated from Detroit’s College for Creative Studies in 2020.

“There’s never been a time in my life when I wasn’t drawing,” she said.

She admired the Gothic ink drawings of Edward Gorey and fell in love wit the sharp wit and concise line work of comic artist Alison Bechdel, creator of the strip “Dykes to Watch Out For” and the graphic memoirs “Are You My Mother?” and “Fun Home.”

“Seeing her ink style, and she was so involved with being out as a lesbian — I just wanted to be her when I grew up,” Paul said.

“My husband and I went to her first student show,” Retzloff said. “Her talent blew me away.”

Retzloff asked Paul if she’d be interested in drawing a “four- or five-page comic” about the 1972 march.

Like Alison Bechdel, Paul prefers to stick to line drawings, but Paul and Retzloff knew color would be a powerful tool for attracting readers, especially in a documentary project.

From a stained-glass window in a church to a package of hot dogs on a grill, Paul’s soulful, tie-dyed, rainbow-colored images bring Retzloff’s text to vivid life.

She worked mainly from black and white photos and “blurry Polaroids” gathered by Retzloff from eyewitnesses and archives at MSU, the University of Michigan and Wayne State University.

“I wanted to make sure these photos come alive and vibrant, while also being nostalgic for the 1970s — purples and tans and browns and greens,” Paul said.

She soaked MSU’s Beaumont Tower, where MSU students gathered the day before the Detroit march, in a prismatic bath of sunset hues.

“My brother went to MSU, so I knew what Beaumont Tower looks like, but I wanted to make it a little more surreal and a little more fun,” she said.

In the final pages, Paul’s color palette flips from oily slicks of urban atmosphere to bright greens, yellows and browns for a picnic at Palmer Park the day following the march.

Paul donated her original art, “with my ink stains and scratched-out panels,” to the MSU Library, in addition to the final renderings.

The art can be viewed through August at the Stephen O. Murray and Keelung Hong Special Collections at MSU, along with materials from MSU LGBTQ+ activists who helped plan the 1972 Detroit march.

Paul had fun making the jump to color, but drawing portraits of real people made her a little bit nervous.

“A lot of the portraits went through four or five renditions, changing the shape of their nose or changing their glasses to make it more accurate,” she said.

A highlight of the book is a moving speech by Jim Toy, a pioneering gay rights activist who co-authored the Ann Arbor City Council’s “Lesbian-Gay Pride Week Proclamation” in 1972 — the first such official proclamation by a governing body in the United States, according to Retzloff.

Paul wanted to meet Toy in person and talk about the comic, but Toy died Jan. 1.

For Retzloff and Paul, the project took on an enhanced appeal as the pandemic dragged into spring 2021.

“Early on, you were reading about people who are exposed, and 21 days later, they’re gone,” Retzloff said. “It’s a possibility I hadn’t experienced since I was in my 20s, and HIV and AIDS were a huge part of being a gay young man. I thought, ‘OK, what do I want to leave?’”

“It was almost a lifeline to something positive to think about,” Paul said.

The upcoming 50th anniversary of the march was another incentive.

“As a culture, we embrace history through anniversaries, and it didn’t seem like this should pass by without being acknowledged,” Retzloff said.

Aside from dates and places, every line of text is sourced from a personal interview, oral history or another primary source.

“Not a lot of comics I know of have ‘works cited’ pages,” Retzloff said.

When accounts contradict each other, Retzloff lets the contradiction hang there and bear witness to the messiness of history. Various sources report that the march drew “more than 200,” “over 300,” and “about 400.” The march’s striking logo — a raised fist with butterfly wings, rendered in lavender — was designed by either Susan Swope or Jay Manning, depending on whom you ask.

The script Retzloff sent to Paul for illustration grew to 20 pages, then 24, and, finally, 27. Support for the ever-expanding project came from private donors, a $15,000 grant from Michigan Humanities, and a $6,000 GoFundMe campaign.

Even with 27 pages to work with, deciding what to include, what to emphasize and what to leave out was not always easy.

There were some things Retzloff and Paul had to deal with, one way or another. Although the march was positive and peaceful, every contemporary news story highlighted one embarrassing incident. A car with four drag queens sitting on the hood suddenly came to a stop, sending three of them to the pavement.

No one was hurt, but the clip appeared repeatedly on TV.

“We couldn’t ignore that, but we didn’t want to buy into that being the punch line,” Retzloff said.

In the final comic, the drag queens are only seen in mid-ride, looking poised and queenly. After they fall off the car, the emphasis switches to a snooping TV reporter with a bulky camera on his shoulder, intent on capturing the spill.

Many such decisions had to be made as Paul and Retzloff Zoomed and emailed their ideas back and forth.

“Tim and I struggled with the line between being factual and historical but still being colorful, interesting and engaging,” Paul said.

Retzloff always hoped “Come Out! In Detroit” would cross over to traditional comic book fans, but he had his doubts.

About half of the 23,000 copies printed will be handed out at Motor City Pride in Detroit, Ferndale Pride, Michigan Pride in Lansing, Ann Arbor Pride and Hotter Than July in Detroit, the oldest running African-American U.S. Pride celebration.

However, Retzloff and Paul are also taking the book to comic book stores and comic conventions, where most visitors are not part of the LGBTQ+ community.

“Tim was worried that it’s a niche project and nobody would be interested,” Paul said. “But I was confident the whole time that a wide variety of people would go for it.”

It was her first time working a table at a big comic convention, and she didn’t know what to expect.

“This very straight, heterosexual, cisgender comic book collector-looking kind of guy — very gruff — came up to me and said, ‘You drew this?’” she recalled.

She told him about the project, unsure of the reaction it would bring.

“OK, I’m going to take one and add it to my collection,” he told her. “Then I’m taking another and giving it to my Aunt Diane, because this is about her people.”

Overall, Paul was pleased at the welcome the book received at the Comic Con.

“It’s a story they’ve never heard before, which it the whole point of it,” she said.  “It’s a new kind of project. People are excited to add it to their collection and see that it gets preserved with the Marvels.”

In a way, “Come Out! In Detroit” is a traditional comic book after all. With a diverse, far-flung cast of characters who set aside their differences to assemble in a big city and fight for justice, it runs rainbows around any Justice League or Avengers saga ever told.