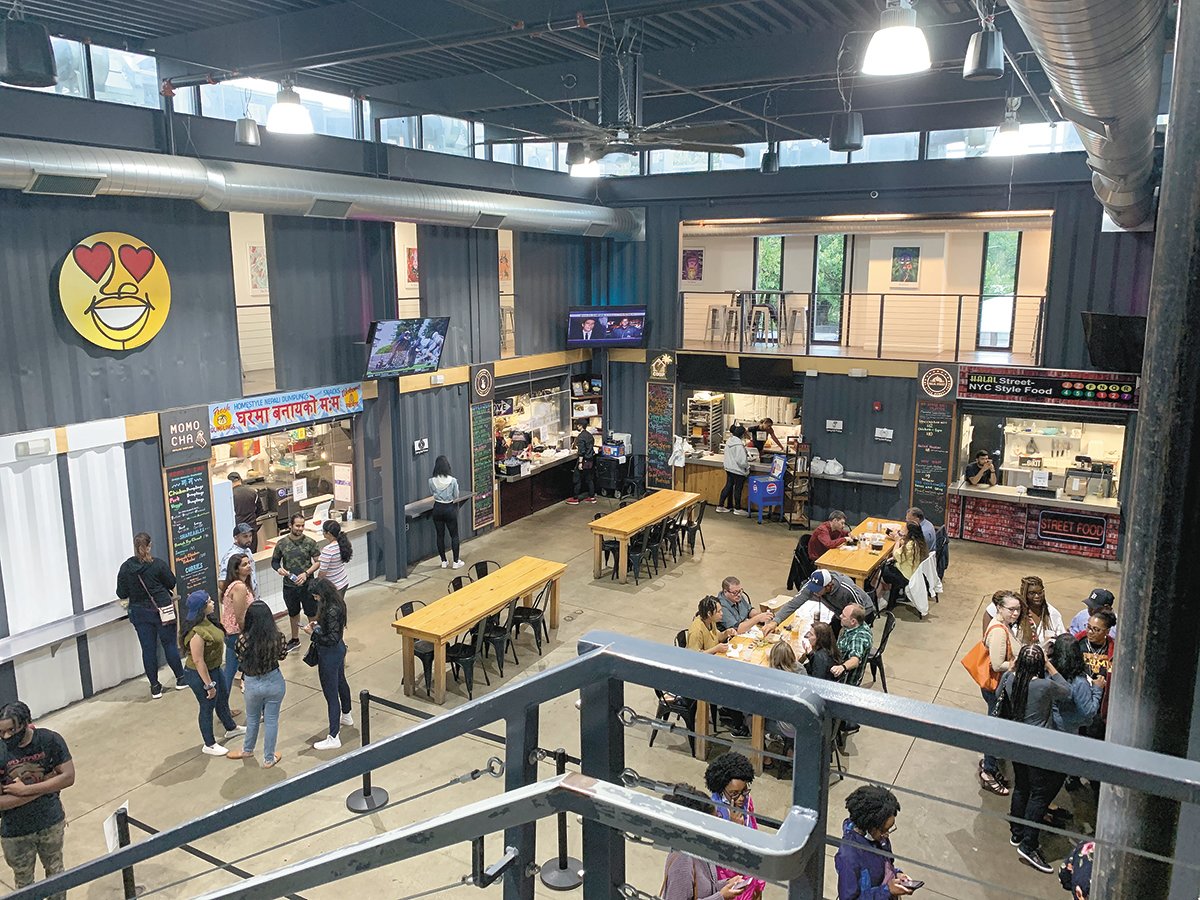 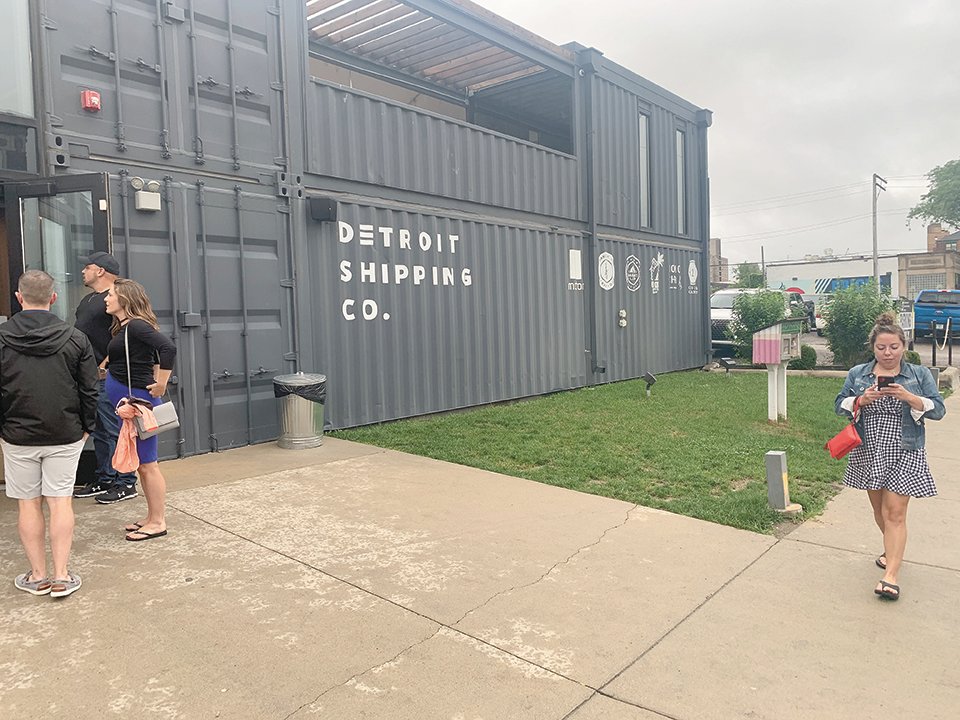 Crowds line up at the door at the Detroit Shipping Co.
Kyle Kaminski/City Pulse
Posted Wednesday, July 21, 2021 12:00 am
KYLE KAMINSKI

The Detroit Shipping Co. was bustling.

Even as heavy rains flooded the city on a gloomy July Friday afternoon, diverse crowds still lined up at the door to mingle at the open-air bar. The back patio was packed. Couples of all ages were enjoying date night. Families and friends were coming together for coffee, craft beers and cocktails. An eclectic blend of food vendors was busy churning out orders — turning an otherwise barren stretch of urban decay near downtown Detroit into a lively weekend hotspot.

With any luck, Detroit Rising Development CEO Jon Hartzell hopes to bring some of that success to Lansing’s downtown riverfront by transforming the old City Market building into the Lansing Shuffleboard & Social Club, a $3.2 million renovation inspired by his work in Detroit.

“In the ‘90s and early 2000s, people were content sitting at a bar, listening to loud music with their Miller Lite and maybe ordering a Labatt Blue for something exotic. That has all changed,” Hartzell said. “People want a more curated experience. When they go out, they want a lot of touch points. They want something hands on and accessible. They want an experience.”

That “experience” in Lansing is set to include six shuffleboard courts, seven food vendors, two full service bars, live entertainment space, a podcast studio and an art gallery. Hartzell plans to begin renovations next month and be ready to open — with a fresh paint job — by the spring.

The City Council approved a 40-year lease agreement on the property last fall. A liquor license was transferred there this month. All financing has since been secured. Hartzell said his team is just putting the final touches on the design before crews can start working later this summer.

“We’re still in line to open next spring. Now we’re just dealing with construction and bidding — which can be the scariest part of the whole project. Prices are just kind of wacky right now,” Hartzell added. “Building costs are up like 40%. It’s shocking. We’re actually now having to make decisions on whether we need to eliminate some items or move it to a second phase.”

The Lansing Shuffleboard & Social Club won’t be an exact replica of the Detroit Shipping Co. regardless of how the construction plans shift over the next month, Hartzell said this week.

The Detroit location was assembled entirely from old shipping containers in 2018. The Lansing project is only a renovation of the existing City Market building that follows the same general business model — plus a few shuffleboard courts and an emphasis on Lansing-area vendors.

In Detroit, customers wait to be seated like any other restaurant. But that’s where the normal dining experience ends. From there, guests can meander over to the walk-up bar and stroll around the outdoor mezzanine with a $7 beer or a $9 cocktail. There’s also a stage for live music, an upstairs coffee shop area, a rented podcast studio and a Detroit-themed gift shop.

The ground floor features six food-truck style eateries surrounding a large indoor dining hall and outdoor beer garden. The parking lot is also filled with tents that have been open all winter long. Orders are placed online and then ferried to tables like a delivery from GrubHub or UberEats.

The hardest part was waiting 20 minutes for a table — and also deciding on what to order.

There were deliciously spicy crab rangoons at Bangkok 96 Street Food; Nepalese dumplings from Momo Cha; Caribbean fusion at COOP; Brujo Tacos & Tapas; and some mouthwatering New York City vendor-style dishes from Halal Street. Some vendors headed to the Lansing development may be imported from Detroit, but Hartzell also wants to bring in local cuisines.

The cavernous pole barn that once housed the City Market and the Waterfront Bar & Grill will be spliced up into a lounge area, a food hall and several miniature kitchens, renderings showed. Bar-height tables will also be scattered throughout the facility for leaning and sipping on drinks.

The number of shuffleboard courts or the size of the 9,000-square-foot mezzanine may shrink as building material prices soar. The same $3.2 million renovation plan announced last year is now estimated to cost nearly $4.5 million. It’s a hiccup for Hartzell’s construction team, but still the Lansing Shuffleboard & Social Club is “one of the easier” projects in his portfolio, he said.

The plan, regardless of its size, is also the same: reactivate the historically unsuccessful property as a cultural hub and upscale foodie destination for the entire Greater Lansing region. No tenants for the Lansing project have been decided, but Hartzell said options are endless.

“We try to build space around the people to try to grow the community together,” Hartzell said.

Applications for food vendors are being accepted for the project now at lansingshuffle.com.

The Shuffleboard Club is the first project for Detroit Rising outside of metro Detroit. Hartzell said city officials recruited him for the project, but he was ultimately swayed into building it because of the recent economic growth in Lansing — particularly the “vibrancy” of the Stadium District.

Construction plans also include opening up the wall facing the river with garage-style doors to enable easy access to Rotary Park and adding more windows to take advantage of sunset river views. The team also wants a racially diverse staff and varied ethnic foods with “approachable” prices. This reporter was able to order four dishes in Detroit last weekend for under $30.

Shuffleboard may be considered a pastime for geezers, particularly for its popularity on cruise ships and in retirement homes, but Hartzell said the concept is less about the game itself and more about simply giving patrons something to do that is easy to learn — even while drunk.

“Ignore the activity. Ask what people want when they go out,” Hartzell explained. “Nobody wants to get all bloated on a big meal. They want entertainment, and it’s really an approachable game. In one hand, you have a beer. In another, you’re pushing a stick. It’s casual. Walk in. Explore. Spend an hour playing shuffleboard. You can take your mother, your sister and your wife.”

The website for the Shuffleboard Club puts it simply: “This ain’t your granddad’s shuffleboard.”

Under Detroit Rising’s lease agreement on the city-owned property, the Lansing Shuffleboard & Social Club could inhabit the space through 2060 and pay a total of about $1.6 million in rent. The last tenant, Waterfront Bar & Grill, paid about $72,000 annually before it was evicted — a theoretical loss of $1.28 million over 40 years.

City officials said the reduced rental rate was justified because the city plans to save about $80,000 annually in maintenance and utility costs that it has paid for the last several years. Detroit Rising won’t require those subsidies. So, instead of losing out on $8,000 annually during the Waterfront’s time at the City Market, city officials expect to bring in at least $24,000 annually through the lease. The deal also requires that space be saved for “community programming.”

Mayor Andy Schor said Detroit Rising has also been “very active” in furthering relationships with local vendors and other organizations that could eventually move into the renovated space.