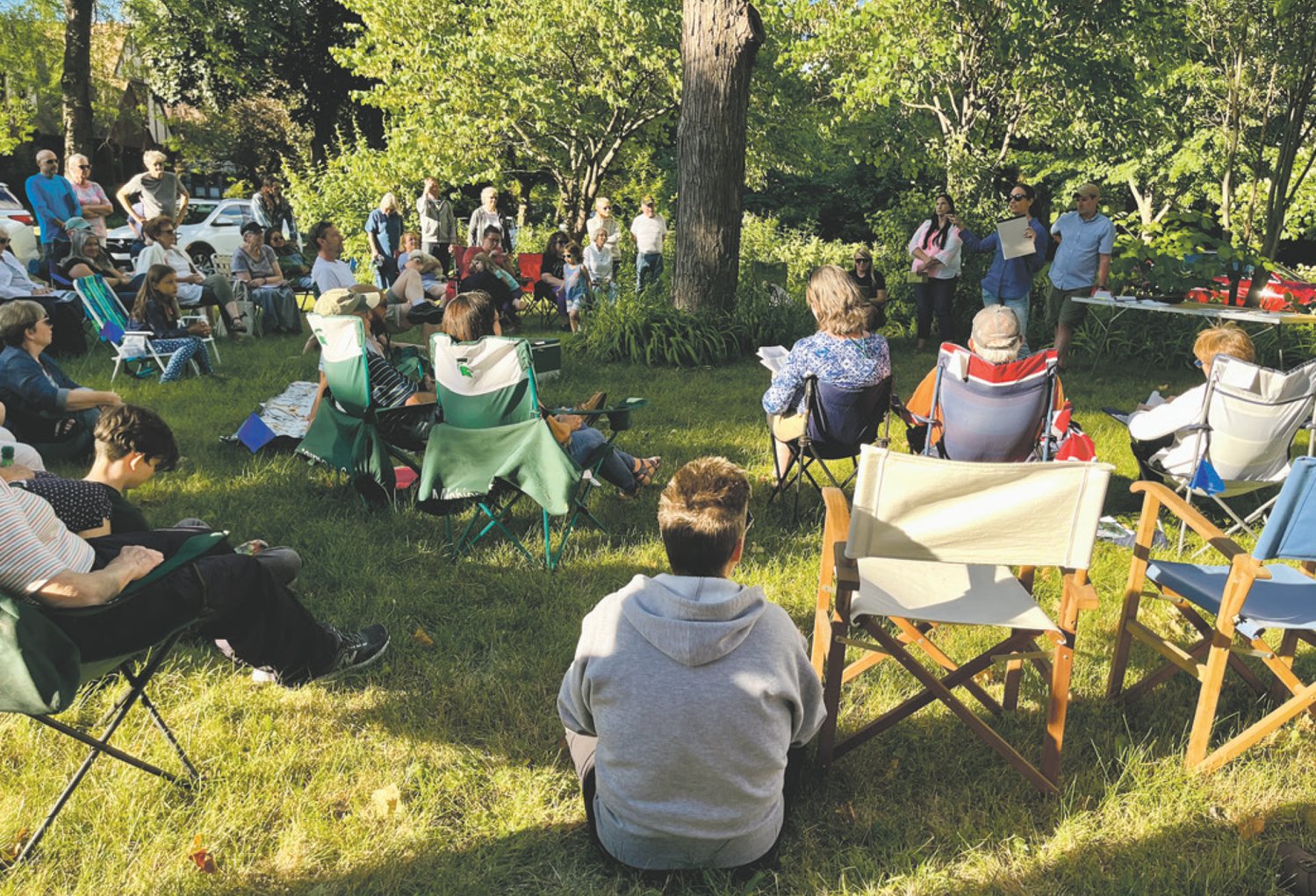 Residents gather in a traffic circle in the Westside Neighborhood Monday evening (June 27) to discuss concerns about how the city’s Combined Sewer Overflow Project might affect their beloved islands.
Dawn Parker for City Pulse 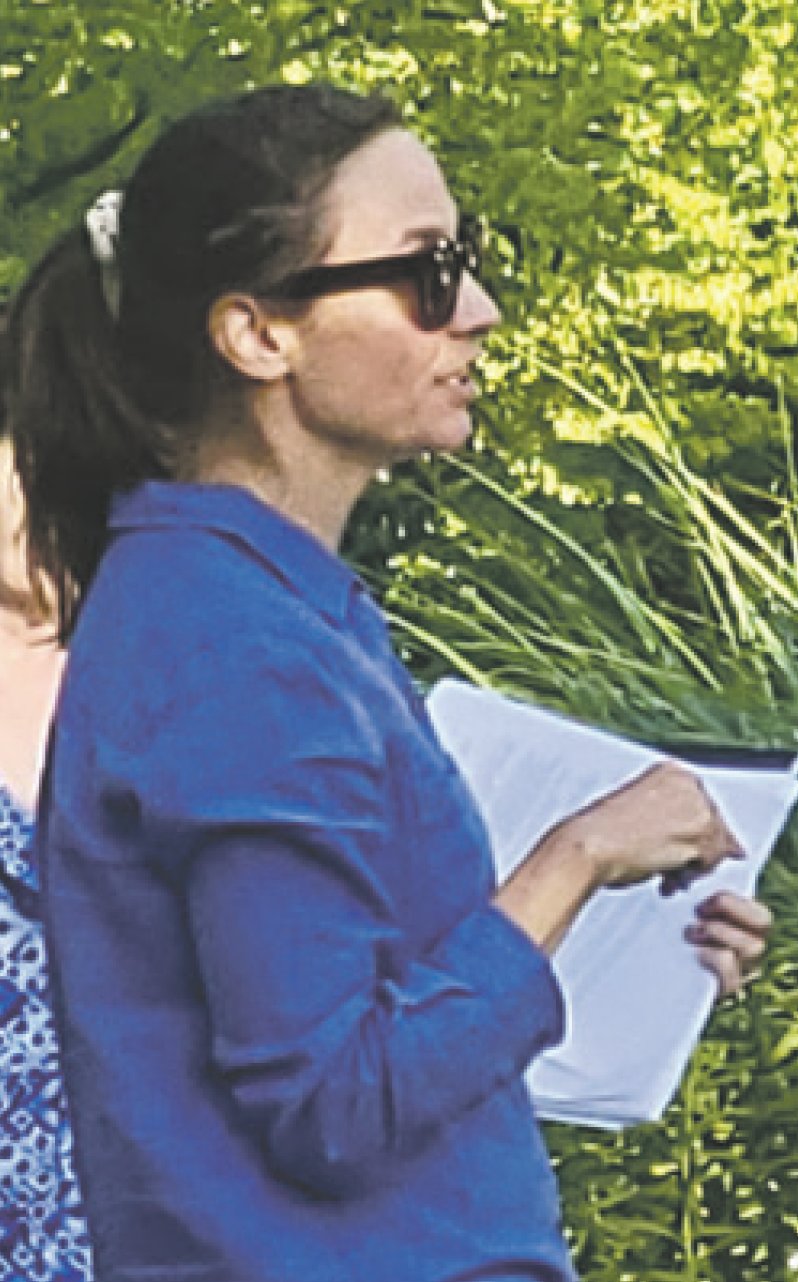 Work would not begin until late next year at the very earliest and would likely start on the east side of Martin Luther King Jr. Boulevard before jumping to the west side of the road in 2024.  ”
Dawn Parker

The Westside Neighborhood is an urban jewel of towering trees, century-old houses and lush flowerbeds.

Residents speak fondly of the traffic islands that dot the streets, comparing them to miniature parks. They do much of the planting and maintenance themselves.

Their love for the place some have lived for decades is prompting them to speak out, fearing their beloved oases will be casualties of the city’s ongoing Combined Sewer Overflow project.

City officials say they’re listening to what residents want, and by no means has a final decision been reached.

A letter dated June 8 and addressed to property owners outlines the goal of the project: new water main, new roadway pavement, new concrete curb and gutter and a new sewer.

The letter goes on to discuss “minor roadway adjustments” for “improvement of traffic flow and safety.” The goal is maintaining “most of the existing features and general character of the neighborhood.” Greenspace would be increased through “reducing the amount of roadway pavement.”

Residents also say they are concerned about the speed of traffic using the neighborhood to avoid congestion on adjacent streets.

One proposal coming from the city is to remove the traffic islands and replace them with small roundabouts and other traffic-management features.

Speeding vehicles aren’t the only issue, said Chris Kolbe, a Westside Neighborhood resident of 30 years who has lived in his home for more than 20 years.

“We also have streets right now that are just full of potholes, everywhere.” The city, he said, “isn’t really doing much of anything about that.”

If the streetscape must change, Kolbe said most residents would prefer there be minimal alteration.

“Everyone living here is aware and likes the way it looks right now. They don’t feel it’s necessary to make any changes. But if there are going to be changes, we would like them to be the same as they are with as little change as possible. That’s the way this neighborhood was designed over 100 years ago.”

The challenge now, Kolbe continued, is to influence city officials before a design is finalized.

Andy Kilpatrick, director of the city’s Public Service Department, said while work must continue on the federally mandated combined sewer overflow project, which has been under way for several years already, no final decisions have been made, and Kilpatrick stressed the city is more than willing to hear residents’ concerns.

City officials aren’t the experts of their neighborhood, he continued — the residents are.

A final design would not be arrived at until sometime this fall, Kilpatrick said, and would only be reached through a process that would include public meetings with residents.

Work would not begin until late next year at the very earliest and would likely start on the east side of Martin Luther King Jr. Boulevard before jumping to the west side of the road in 2024.

In the Westside Neighborhood, Kilpatrick said the sewer lines — many of which date from the 1950s or earlier —are at different depths below the street. And it’s not just about going straight down, Kilpatrick added, you also must go out the same distance in each direction.

Depending on where the lines are, that could affect the entire street.

When the project is completed, according to documents on the city’s website, more than 1.65 billion gallons of raw sewage will have been kept out of the Grand River and ultimately also out of Lake Michigan.

Frei looked out her window on a recent Thursday evening to see a young couple enjoying a picnic supper on one of the islands. Such sights are a common occurrence, Frei said.

The city’s letter to residents mentioned “upgrades,” which Frei said residents have been told would improve traffic flow and safety and increase green space.

One proposal from the city, Frei said, takes out trees and replaces them with pavement or grass. To her, that’s not an ideal solution.

Resident Hillery Glasby said while many residents support the CSO project, it’s the proposed removal of the islands that has them concerned.

“We have some really old and beautiful trees that many of us look forward to seeing bloom throughout the spring. They offer us shade in the summer,” she said.

“These are spaces that we look at and enjoy, and see other people, children and pets enjoying every day.”