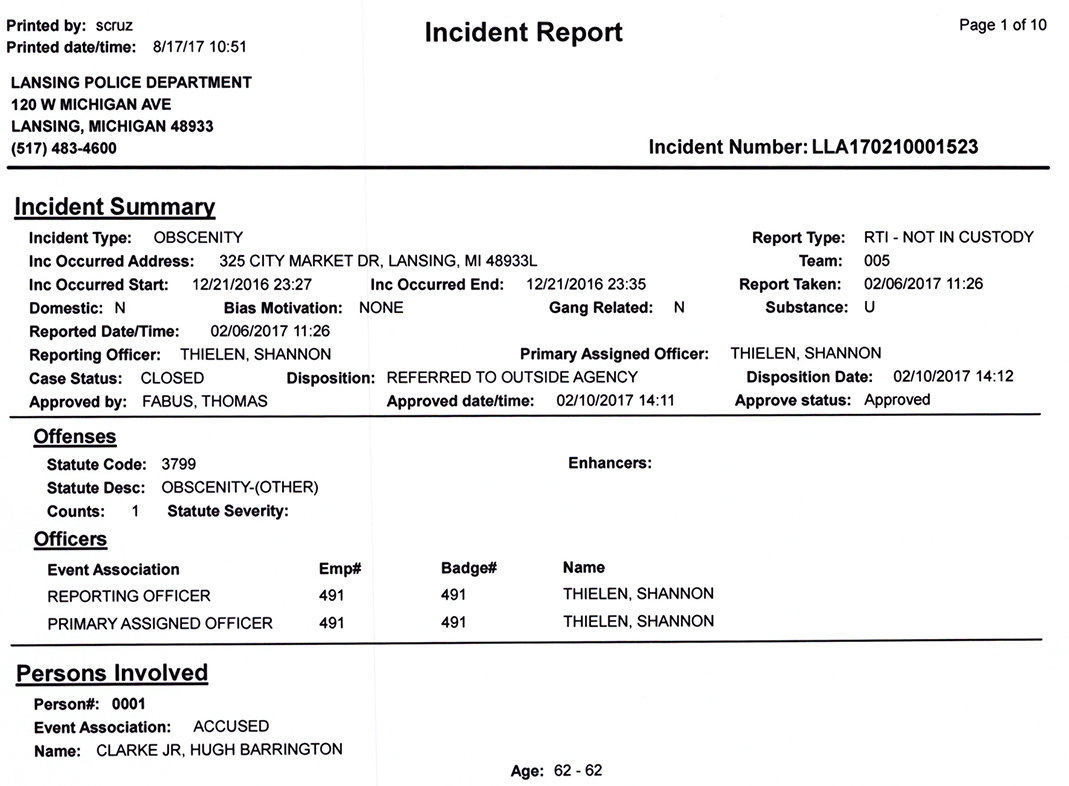 The opening page of the Lansing Police Incident Report, which alleges 54-A District Judge Hugh B. Clarke Jr. engaged in sex in the bathroom of the Lansing City Market with a woman who worked for attorney Edwar Zeineh. City Pulse received the report from the City Attorney’s Office in June after filing a Freedom of Information Act request. After learning the investigation into the alleged incident was no longer active, City Pulse asked for and received a second, less redacted version.
Lansing Police Department 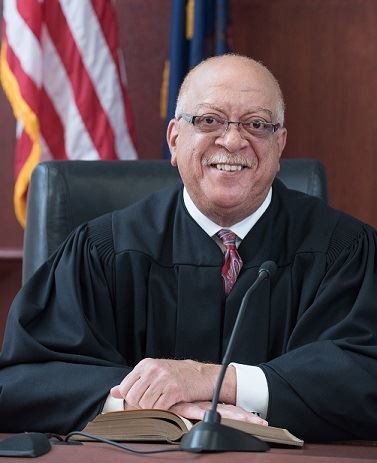 The allegations are so pulpy, the reports sound more like a gritty drama than real life.

“I think it’s pretty fucked-up I had to suck his dick in order to keep my job,” a witness reportedly overheard a woman say in the bathroom of the Lansing City Market.

Two witnesses reportedly identified the man in that liaison as retiring 54-A District Judge Hugh Clarke Jr. The woman, witnesses said they were told, was speaking to Lansing attorney Edwar Zeineh — and she was Zeineh’s employee.

City Pulse has obtained a police report through a Freedom of Information Act request containing the two witness statements, which allege Clarke had a drunken sexual encounter in a bathroom stall near the Waterfront Bar & Grill. The alleged incident occurred more than two-and-a-half years ago, in December 2016.

After taking their statements, police handed the case off to federal authorities. Lansing’s former police chief, Michael Yankowski, said the police turned the matter over to the FBI to avoid any conflict of interest in a case involving a local official. Though the FBI may have investigated the alleged incident, Detroit field office special agent Mara Schneider said the agency isn’t now.

“The matter was referred to us but there is no ongoing FBI investigation,” Schneider said, citing FBI policy for her inability to comment further.

Though rumors have circulated in local government circles about the alleged incident, with Clarke leaving the bench, it seems they may remain just that. No charges were ever filed, and Clarke has not been publicly punished or sanctioned, but questions remain about what became of the complaint. Clarke did not respond to repeated requests for comment.

The police complaint relies on statements by a 25-year-old man and his 23-year-old girlfriend who were in town from Florida to see family. They said they were at the bar on a night shortly before Christmas 2016. They were visiting with a friend of the male witness at the bar when the friend “mentioned to him that a girl had told him that a judge up at the bar was making sexual advances at her and another girl.”

The friend, a shop owner, knew a lot of people “due to the location of his business,” the male witness said. He identified Clarke and Zeineh to the witnesses and reportedly told them the woman worked for Zeineh. The witnesses provided dates for the incident in their separate statements one day apart but otherwise generally told the same story.

Both witnesses alleged they saw Clarke leave for the bathroom with the woman identified as Zeineh’s employee. The male witness described the man they believed to be Clarke as “a B/M, approximately 60 yrs. old, a little 6’ tall, freckles on his face, possibly wearing glasses,” according to the complaint. The female witness provided a similar description.

According to the police complaint, the female witness followed them into the women’s restroom and took two brief videos of the alleged encounter from a nearby stall. The female witness said she followed them because she was “nosey.” Little is identifiable in the videos aside from two sets of shoes, and in one video an individual is kneeling. Other areas of the video were pixelated by police.

According to the statement, after the couple left the bathroom, Zeineh approached and spoke with them briefly. Zeineh reportedly then went to use the men’s bathroom and the woman joined him. The male witness followed and told police he found her sitting on the sink while “the male was going to the bathroom.”

The report goes on to say that the woman “apologized” to the male witness “for being in the men’s bathroom but said she was there to have a conversation with the male.” The male witness “described her demeanor as nonchalant.” The male witness then entered a stall, from which he “overheard the female tell the male, ‘I think it’s kind of fucked-up that I had to suck his dick to keep my job.’”

The male witness told police that after this incident he felt that there might be “some connection between the lawyer and the judge that would have compelled the female to participate in this act and then talk to her boss about it in the way that she did,” the report said.

All the witness’ names were redacted from the police report. The woman who allegedly engaged in sex with Clarke was never identified by name. City Pulse has withheld her description by witnesses due to the implication of sexual coercion contained in the allegations. Despite multiple attempts to contact Zeineh, he also did not respond to requests for comment.

At end of June this year, Clarke announced he would leave the bench in September after serving nearly nine years. He said he was leaving to pursue “new business opportunities” and spend more time with his wife. Clarke announced plans to retire from the courtroom on Sept. 13 and said he would serve his last day on the bench on Aug. 23.

Clarke previously declined to elaborate further to City Pulse on his departure. His wife, former Lansing City Council President Judi Brown Clarke, said she was aware of the allegations stemming from the alleged City Market incident.

A story in the Lansing State Journal on June 28 quotes Clarke as saying the decision to retire “was a long time coming. You know you get to a point in your life as you approach 65 that you want to look at doing other things less stressful.”

Former Democratic Gov. Jennifer Granholm appointed Clarke to fill a vacancy on the nonpartisan District Court bench in 2010. He was elected in 2012 to serve the balance of the term and reelected in 2016. He would have been eligible to run again in 2022 for one more term before he turned 70, the cutoff age for running for judgeships in Michigan. Zeineh and immediate family members donated $2,500 in total to Clarke’s two campaigns for district judge. Zeineh has also contributed lesser amounts to other judges, according to state campaign finance records.

No formal complaints against Clarke have been publicly listed with the Michigan Judicial Tenure Commission, the state agency that typically handles allegations of misconduct by judges. The commission also has the authority to privately discipline judges. Lynn Helland, the commission’s executive director, said he couldn’t comment when asked if the commission had taken any action or investigated.

“Those are very fair questions. Maybe it won’t surprise you to know the Supreme Court has a rule that we can’t talk about any of that stuff — I’m afraid I can’t answer your questions,” he said.

The Attorney Grievance Commission, the investigative and prosecutorial arm of the Michigan Supreme Court for attorney misconduct, has no public suspensions listed for Zeineh or Clarke, though they can also sanction attorneys privately.

Lansing Police learned of the alleged incident in February 2017, when a local estate law attorney called to report it. The attorney’s son, the male witness, had reportedly relayed the story to him, who “felt this was a possible crime that needed to be investigated.”

According to the report, that attorney “believed that the judge told the female that if she didn’t do this for him, he’d see to it her boss would not get any more work from him,” though the firsthand witness statements hadn’t alluded to this.

After the Lansing police investigator took the couple’s statements and asked Waterfront’s management about video footage (there reportedly was none), the case was turned over to the FBI. No charges were ever filed by the city, according to City Attorney Jim Smiertka. State Police also never had any reports referred to them, MSP spokeswoman Shanon Banner said.

The female witness stated that “it appeared to her that the judge was drunk," according to the police report. She noted that “the judge had been drinking alcohol the entire time that she was there,” and noticed him talking to a young girl. She added that “when the judge walked out of the bathroom, the back of his jacket was tucked into his pants. Someone told him, and due to his level of intoxication, he couldn’t grab it out to fix it.”

After this alleged incident, Zeineh went on to host a fundraiser for Clarke’s wife’s mayoral run, and he personally donated nearly $4,000 to her campaign despite owing more than $70,000 in delinquent property taxes, according to Ingham County Treasurer’s Office records.

In 2013, Clarke had ruled in Zeineh’s favor after a right-of-way dispute with the city ended up in court. Zeineh later sued the city over the same property dispute but dropped the case in early 2018. They also now serve together on the council of the Criminal Law Section of the State Bar of Michigan. Clarke is secretary and Zeineh is a council member.

(Kyle Kaminski contributed to this story.)