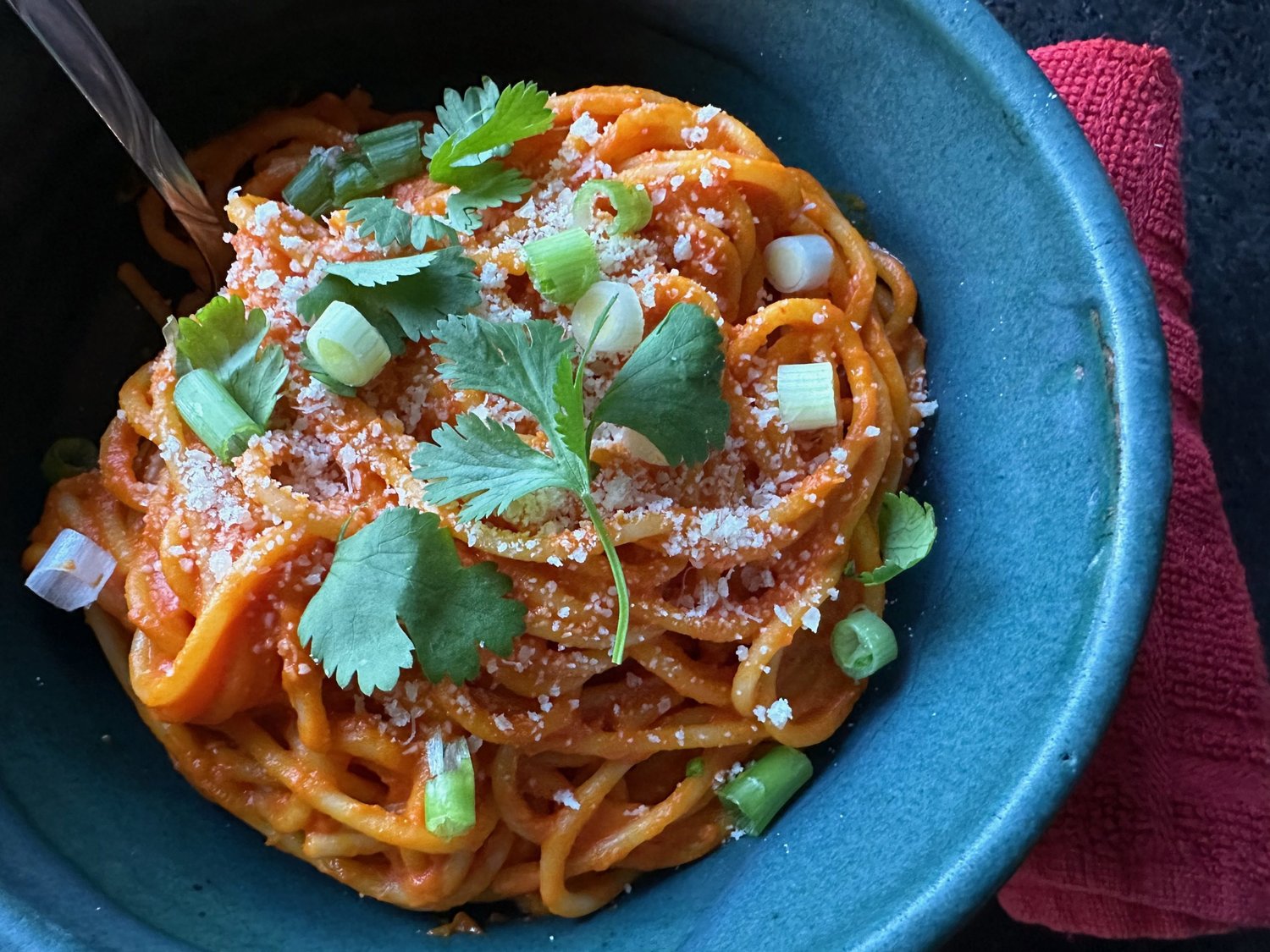 Magma sauce, pictured here over pasta, is the polymath of condiments. It adds delicious flavor to any dish and is also delectable on its own as a soup.
Ari LeVaux
Posted Thursday, December 8, 2022 12:01 am
Ari LeVeux

A sauce called “Magma” made its debut at Thanksgiving dinner this year. As guests passed the sauce around the table, the revelers quickly noticed its power and utility. The crimson emulsion was like a second gravy for the turkey. Its sweet pungency enhanced the stuffing, which sounds impossible, but it’s true. The potatoes, dressed in red, became all the more delectable, and the Midwestern casserole became downright edible. Someone at the table dubbed it “red mayonnaise,” because it improved everything it touched. After the meal, there were so many leftovers that the hosts handed out full takeout containers to the departing guests. But they kept the scant remains of the Magma in a takeout container for themselves.

Like its namesake, Magma sauce comes from the earth, but the surface, rather than the depths where true molten lava originates. Forged from roasted red peppers and baked squash, Magma imparts the sweetness of both, with a near-piquant undertone that makes you cringe like you’re about to get slapped but doesn’t deliver. Instead, you get kissed, with a lipstick-red mark possibly left on your face. There are a few extra seasonings, but the peppers and squash dominate, and there is no need to complicate matters.

We owe the existence of Magma sauce to an arrangement my kids have with a local farmer. They sell his excess produce in a roadside stand and split the money. This year, after bringing home a literal truckload of squash and peppers, winter came unseasonably early. The icy conditions made it impossible to put the stand out. After six weeks of waiting for autumn to regress from the clutches of winter, we threw in the towel and donated the produce to the local homeless shelter in time for Thanksgiving. I hung onto a couple of boxes of each for personal use.

On Thanksgiving morning, while my son made an angel food cake, I roasted red and yellow peppers and baked an orange kabocha squash that goes by the name Sunshine. I peeled the blistered peppers and scooped the squash flesh, combining these two ingredients in the blender with olive oil, garlic, salt and some thyme.

The resulting puree was thick, and after some time in the fridge, it grew downright stiff. It turns out that both squash and peppers contain pectin, a carbohydrate that jam makers use to thicken their product. Jeopardizing my precious Thanksgiving belly-space, I began eating my creation, heavily garnished with cilantro and green onions. I spooned it down like soup, not at all regretting the turkey I was forsaking. It was like eating a salad in a bowl of thick dressing, so tangy from the bell peppers that it didn’t need acid.

The day after Thanksgiving, I made another batch, this time with some hot peppers. I spooned this red mayo upon scrambled eggs, where it looked and tasted like salsa despite having no tomatoes. I tried some on pasta, where it was like a creamy marinara.

Since we had some leftover yolks from my son’s angel food cake, I made mayonnaise and folded in some Magma. Although it was now a true red mayo, it had less charm than the original. The oil and yolks dulled the raw, vegetal flavors, and the original version was thick enough, thanks to the pectin. After an hour in the fridge, the Magma is even thicker, so solid you can’t pour it. You have to scoop it like pudding. And unlike its namesake, Magma sauce stays red, even when cool.

The quantities listed here will make about a quart of Magma. As a soup, it serves four. As a sauce, a few more.

Preheat the oven to 375 degrees. Cut the squash in half, scoop out the seeds and lay the halves down on a baking pan. Cook until soft enough to squeeze from the outside, about 45 minutes. On a separate pan, roast the peppers, turning once or twice so they blister on both sides. Remove them after about 30 minutes, or when they are completely blistered and collapsed. At the same time, roast the garlic in the olive oil in a small oven-safe dish until soft — about 30 minutes.

Allow the roasted ingredients to cool. Peel the peppers as best you can — it’s okay if some bits of skin remain — and scrape out the seeds. Scoop out the flesh from the squash. Add the squash, peppers, garlic and olive oil, salt and thyme to a blender. Puree. Season with more salt if necessary. Puree again.

Your Magma sauce is now ready. Let the eruption of flavors begin.